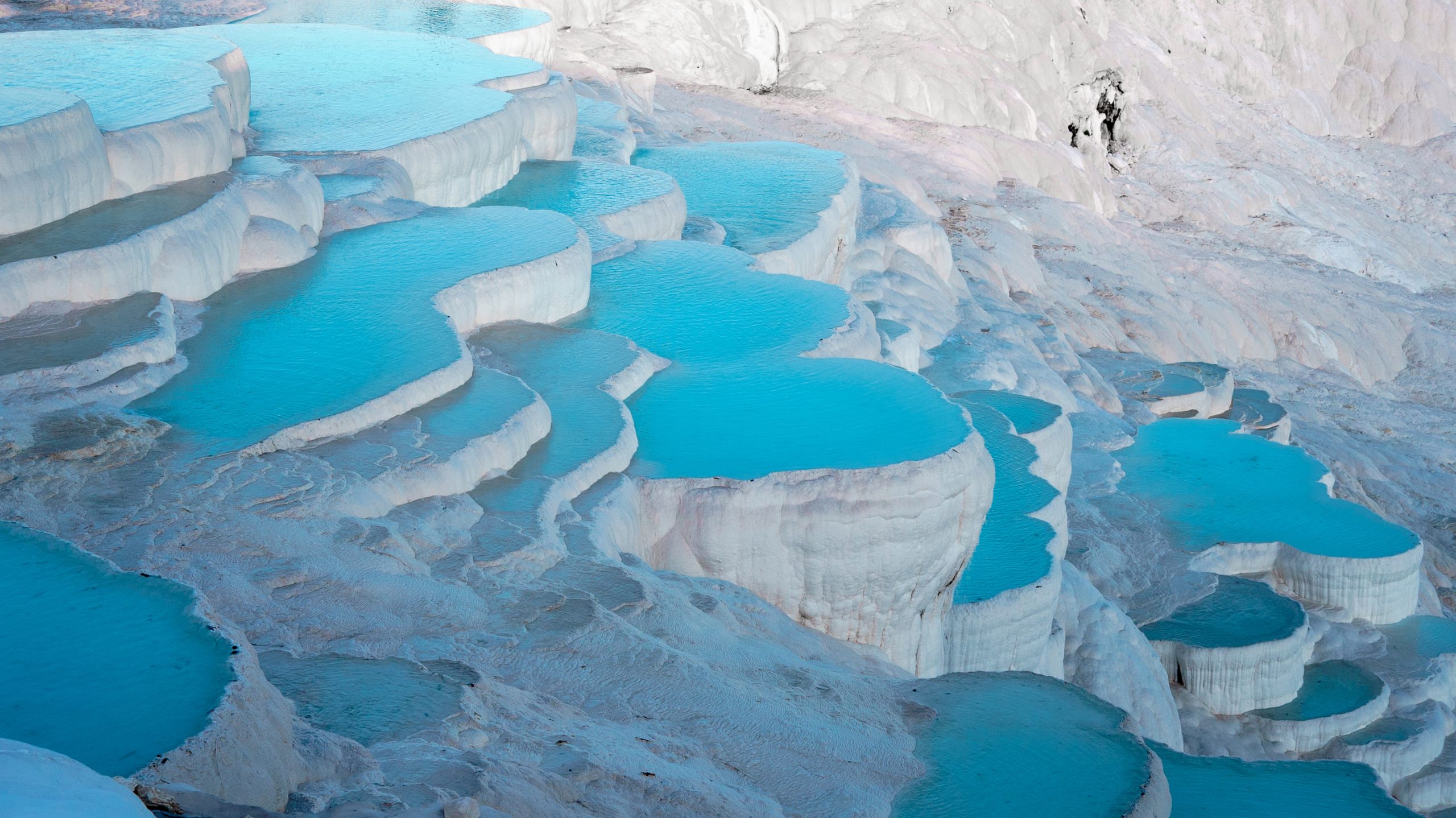 
From flaming mountains to hot pools, and from grand theatre to ruins of cities, there is a lot to explore when you visit Turkey. It’s no wonder that Turkey is one of the world’s most popular vacation spots. Located along the lines of Europe and Asia, Turkey holds a unique position and cultural crossovers from Eastern and Western influence. Moreover, landscapes are beautiful – from mountains to beaches and offers a lot of activities for visitors to do.

Here is the list of 10 exciting places to visit in Turkey:

Pamukkale pools are a hot and natural formation of mineral springs. The terraces look like cotton and hence the name Pamukkale (cotton castle). The springs are built over centuries by limestone deposits left behind by running water.

How to reach Pamukkale:
Pamukkale is located in the hills of the Denizli Province in southwestern Turkey. It’s located about 19 km from the city of Denizli.

The best way to experience the uncrowded Pamukkale pools is to spend the night in Pamukkale village and arrive early at the pools. The tourists do not arrive until later in the day and you can enjoy the quite time here.
Pamukkale is also known for the well-preserved ruins of the Greco-Roman city of Hierapolis, which was originally built around a warm-water spring and is 700 meters away from Pamukkale. You can spend a day here to visit these ruins.

2. Gobekli Tepe- The First Temple of the World

Gobekli Tepe is considered as one of the most important archaeological sites of the world and located in the Southeastern Anatolia Region of Turkey. You can reach here from the city of Sanliurfa. The journey is 12 km long towards northeast of the city There are flights from Istanbul to Sanliurfa. The flight takes around 70 minutes.

The mysteries of the site still remains. One thing is certain though – Gobekli Tepe has many more fascinating secrets to reveal. Only 5% of Gobekli Tepe has been excavated. More future work with better types of equipment at the site will undoubtedly cast further light and help us an understanding of a critical stage in the development of human societies.

Why to visit Gobekli Tepe

Yanartas means flaming stones in Turkish. And true to its name, the site consists of dozens of small fires which burn constantly from vents in the rocks. From a distance, this looks like any other mountain, but once you climb the top, you will see these fires from vents. Yanartas is located near the Olympos valley and national park in Antalya Province in southwestern Turkey.
You can also visit the ruins of the temple of Hephaistos, which is directly below the fire. Hephaistos was the Greek god who was associated with fire through his role as the blacksmith to the gods.

How to reach:
It is 80 km away from Antalya city center. To see the fires and the ruins, visitors must first go to the entrance at the foot of the mountain. The site is at the top of an easy one kilometre climb. The best time to visit this place is at night, when the fires are at their most spectacular display.

Troy is one of the most famous archaeological sites in the world with a rich 4,000 years of history. Troy is located on the mound of Hisarlık, 4.8 km from the southern entrance to the Dardanelles. Archaeologist Heinrich Schliemann undertook the first excavations at the site in 1870, and those excavations could be considered the starting point of modern archaeology and its public recognition.

The excavations continued throughout the 20th century and have revealed nine different cities – labelled Troy I to Troy IX after Schliemann’s (and his successor Dorpfeld’s) original classification. It has also revealed no less than 46 levels of inhabitation at the site. Troy was added to the UNESCO World Heritage list in 1998.

Zeugma Mosaic Museum is the biggest mosaic museum in the world, containing 1700 sq. mt. of mosaics. You can go to the town of Gaziantep to visit here. There are daily flights from Istanbul to Gaziantep and flights take around 70 minutes.

Mosaic is a pattern or image made of small regular or irregular pieces of colored stone, glass or ceramic which are put in a shape or pattern by plaster/mortar. Mosaics are often used as floor and wall decoration, and were particularly popular in the Ancient Roman world.

The museum is 90,000-square-foot and features a 7,500-square-foot exhibition hall. Mosaics help you visualise the city life during the Roman era and provide a glimpse into the belief system of those days. A small piece of 2nd century AD, the mosaic of Maenad, which is popularly known as the Gypsy Girl, is one of the most famous mosaics here. The doleful eyes of the figure made the piece the most loved artefact of the Museum, and she is regarded as the Mona Lisa of Zeugma and the symbol of the ancient city and the museum.

The mosaic of Maenad is everywhere – from brochures of the Zeugma Mosaic Museum and its tickets, in pictorial illustrations of art history of the region, on picture postcards and tourism souvenirs, the museum website, and right beside the doorway leading into the massive museum building itself. Zeugma Mosaic Museum is a precious repositories of great art and a must-go destination for art historians, archaeologists and art lovers interested in the cultural history.

Mount Nemrut Tumulus is in Kahta county which is 86 km east of Adıyaman city. Nemrut Dag is the Hierotheseion built by the late Hellenistic King Antiochos I of Commagene as a monument to himself. The giant statues on Mount Nemrut represent the gods worshiped by the people of Commagene and were specifically built to accompany King Antiochus’s tomb.

One of the essential rituals of visiting Mount Nemrut is enjoying the sunrise from the summit. You can enjoy watching the sunrise together with the statues of gods who have been witnessing it for two thousand years. The one thing that you should keep in mind is to bring warm clothes on your way to the summit as it is very cold before sunrise and after sunset, even in the middle of summer.

The architectural jewel of Aspendos is its theater, the Aspendos Theatre. It is widely consider the best-preserved ancient theater in the world. The theater was built during the reign of the Roman emperor Marcus Aurelius.

Although the theatre was build in the Roman period, it displays many features typical to Greek theatres. You need to visit Aspendos Theatre to let its spectacular visual and architecture tell its story. There are various tours of Aspendos that you can take, including self-guided and guided options. The ruins are accessible by foot. The grand site provides wonderful knowledge and insight on the Roman stronghold and influence in the Turkish area.

It is 45 km away from the Antalya city center and still acts as a major destination for concerts today. Every year the Aspendos International Opera and Ballet Festival is held here, where artists from all over the world participate to play in one of the greatest theaters.

Sardis, or Sardes, is the ruined capital of ancient Lydia, located about 90 km west of present Izmir, Turkey. This ancient synagogue built in the 3rd century A.D. is the most important archaeological discovery in the Sardis excavations. It is one of the oldest synagogues in Anatolia. The extensive ruins here also include beautiful mosaic tiles. This was the first city where gold and silver coins were minted. Excavations of Sardis have uncovered more remains of the Hellenistic and Byzantine city as well as of Lydian town. The ruins include the ancient Lydian citadel and about 1,000 Lydian graves. There is a lot to do and see in Sardis. Sardis is divided by the Izmir-Usak highway, with the Marble Court and synagogue on the north side, and the Temple of Artemis to the south, along with remnants of a Byzantinechurch, a late Roman villa.
You can visit Sardis from Izmir. It is about 90 km from the town. You can go either by private car or by frequent regional minibus or, by train.

Yeralti Camii is an amazing Ottoman styled mosque that is situated sunken into the earth. Unlike most Islamic temples in Istanbul, that are above the ground, this mosque is under the ground! For this reason it was dubbed the “Underground Mosque,” or “Yeralti Camii” in Turkish.

The mosque is located in Karakoy near Galata Bridge. You can easily reach by Tram (T-1) and tube (Tunel) in Karakoy station. It’s also reachable by bus or ferry from Karakoy. The mosque is open to visitors outside of prayer times. You can find two tombs – Abu Sufyan and Amiri Wahabi, both of whom are supposed to have died in the first Arab siege of the city in the seventh century. Their graves were revealed to a Naksibendi dervish in a dream in 1640, whereupon Sultan Murat IV constructed a shrine on the site.