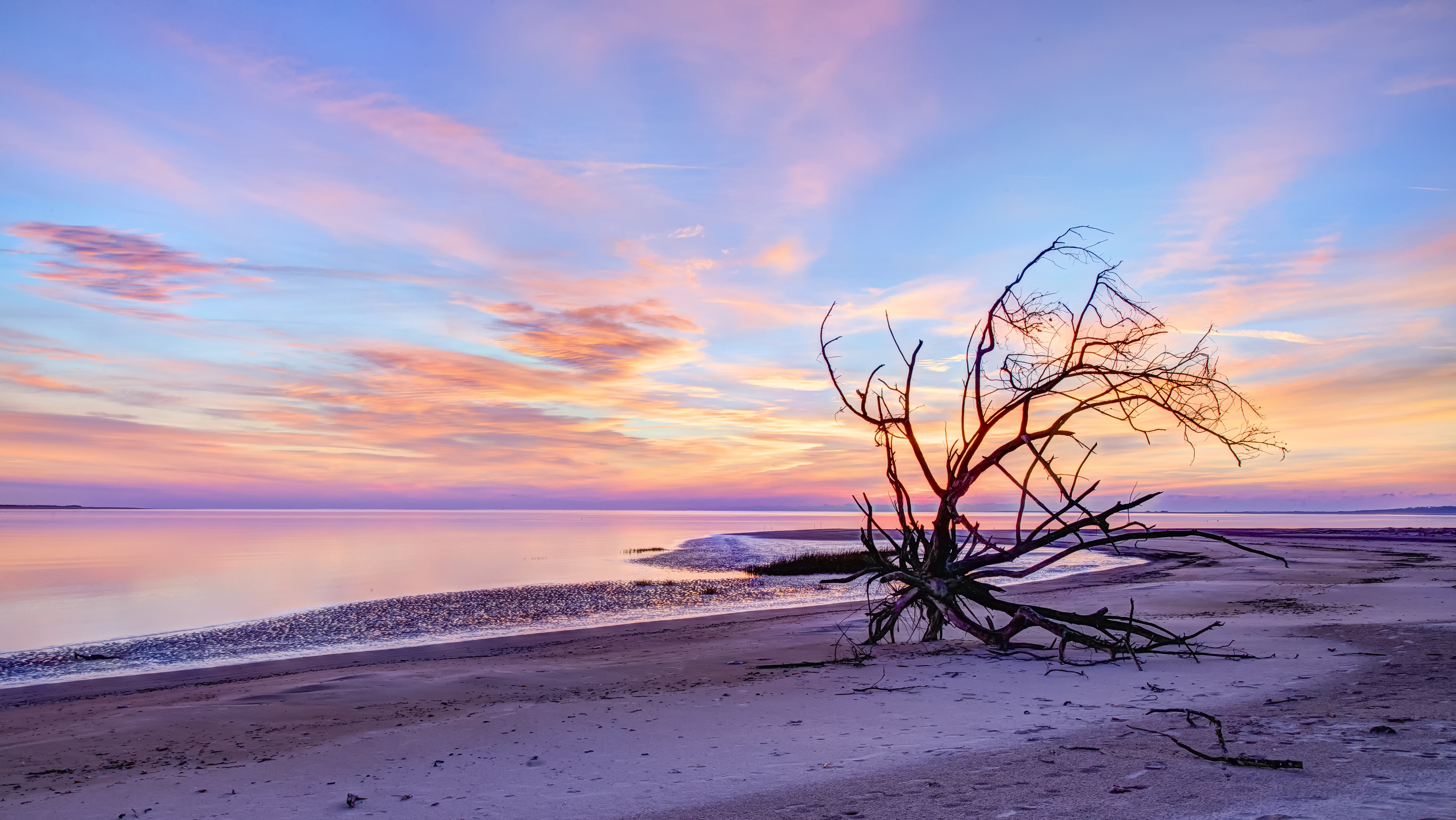 Nothing beats a quiet day spent at the beach. Especially if you can find a stretch of silky sand that is not crowded.

From a national park located on a remote island to a state park packed with driftwood to a cove known for its whale migration, here are some secluded beaches with ample elbow room.

At Big Talbot Island State Park, on an Atlantic Coast barrier island between Amelia Island and Fort George Island, you’ll find a beach that might not be what you’d expect to see in Florida.

About a half-hour drive from Jacksonville, Boneyard Beach (aka Black Rock Beach) is not your typical white sandy beach. Along the coastline and among the 30-foot bluffs, you’ll find massive driftwood trees.

Climbing these beauties will make you feel like a kid again, and if you stick around for sunset, you’re in for a treat. The driftwood makes for a lovely silhouette shot. Even the geological formations here are super unique – only 3.5 percent of land in the US has this type of black rock.

The 8 best campgrounds in Florida

From sand dunes to sea cliffs, Michigan is full of natural wonders worthy of a quick escape. Talk to any Michigander for recommendations and Sleeping Bear Dunes National Lakeshore on South Manitou Island will surely come up.

Trekking to the top is practically a rite of passage. If you take the Dunes Trail, the whole trip is about 3.5 miles and takes 2 to 4 hours depending on your fitness level and the weather.

The peaceful area is home to 35 miles of shoreline, so choosing your own spot is very simple. With bright blue water in the foreground and sand dunes behind, it’s serene to the nth degree. After beach lounging, hike among conifers and hardwoods. But remember, cougars sometimes roam around these parts.

9 of the best scenic hikes in Michigan

Nearly 99 percent of the park’s hundred square miles are submerged beneath the water where moray eels, Goliath grouper and nurse sharks flourish.

During the day, spend time snorkeling, kayaking and learning about when Ponce de Leon first stepped foot here in 1513. When the ferry boat leaves if you camp on the beach here and you’ll have the island almost to yourself. Major bonus: it’s relatively bug-free because there’s no fresh water to attract mosquitos.

The 8 best beaches in the Florida Keys

Unusual beaches you have to see to believe

Located across the Calibogue Sound from Hilton Head Island, this South Carolina island is surrounded by beautiful uncrowded beaches and ancient oaks dripping with Spanish moss. There’s no bridge to the mainland, so book a ferry ride or hop in your own boat to get there.

Once you arrive, golf carts, bikes or your own two feet are the best way to explore. Take time to learn about the Gullah/Geechee influence, soak up the rich art scene and sample the Lowcountry cuisine.

Gray Whale Cove State Beach in Half Moon Bay is one of Northern California’s under-the-radar beaches. Pack a picnic lunch (there’s a picnic area on the bluff with a spectacular view) and if you are there during the Gray Whale migration (November to April) be on the lookout for the gentle giants.

The whales often come fairly close to shore. When you venture down to the beach, just know that there is a nudist area on the north end. So, if you aren’t into that, go left at the bottom of the stairs.

From camping to the Carnegies, Cumberland Island sure is a special place. This national seashore is a haven for wildlife. On the beach, you’ll find wild horses and loggerhead turtles.

Hike through the island’s interior, which is shaded by enormous oak tree canopies, for the chance to see armadillos, deer, hogs, rabbits, turkeys and raccoons. Except for the wildlife, it’s never crowded because the only way to get there is by boat or ferry ride, and once you are there, you’ve got 17 miles worth of sandy shores to choose from.

10 beautiful Georgia hikes to keep you busy in every season

If you want secret beaches, this one’s name says it all. Tucked away off the Samuel H. Boardman Scenic Corridor near Thunder Rock Cove, 1/3 mile south of milepost 345 on US 101, this is a tiny, lesser-visited gem mostly favored by locals in the know.

Another trick that keeps the crowds at bay is that you need to check the tide tables before you go – Secret Beach can only be visited at low tide. If you can jump through all those hoops, however, you’ll be rewarded with some of the Oregon coast’s best scenery.

The 25 best hikes in Oregon past mountains, waterfalls and dunes

Five gorgeous islands off the Southern California coast make up the remote Channel Islands National Park. Arrive by small plane or boat or kayak to the 100-foot-wide Painted Cave, one of the largest sea caves in the world.

And it’s not the only one: There are 30 sea caves dotting the islands and plenty of dramatic sea cliffs. Known as the Galapagos of North America, many come to see the endemic plants and wildlife.

California’s best places to camp on the beach

Many of northern Oregon’s best-beloved beach towns are under two hours from Portland, which means they get pretty crowded in the summer and on sunny weekends. But Southern Oregon is criminally underrated and boasts the same incredible Pacific frontage as the rest of the state, protected for public use as The People’s Coast.

Gold Beach is one of the best, where the mighty Rogue River meets the ocean. Be sure to go on a kayaking adventure with South Coast Tours to see some of the hidden coves and learn about the history of this former gold rush town – not to mention the spectacular, colorful marine wildlife.

In a state known for its rocky, cobbled coastline, Roque Bluffs is a rare stretch of sand cast off by glaciers millions of years ago. With a picturesque lighthouse, a pretty nearby pond and surrounding hiking trails, there’s a lot to keep you occupied in addition to stretching out on a beach blanket or taking a teeth-clattering swim.

Protected as a state park, there are picnic facilities here and a playground for little travelers. This is also a fantastic destination for birders, with feathered friends that range from songbirds to bald eagles.

Hawaii has no shortage of stunning beaches. But one of the best is one of the hardest to reach – Papakōlea, aka the Green Sands Beach. First you have to make your way to the southernmost tip of the Big Island – which is also as far south as you can go in the whole United States.

From there it’s a 2.5-mile hike along a hilly dirt road to the cliffs, from the tops of which you’ll work your way down to the beach. You might be tempted to pay cash for a ride in a 4×4 vehicle driven by one of the locals who congregate for the beach, but doing so will damage the delicate ecosystem around Papakōlea.

It’s one of just four such green sand volcanic beaches in the world, so be extra careful to leave no trace and pack out everything you might bring in – including reef-safe sunscreen.

How to choose the best Hawaiian island for your trip

Wind-tossed coastal bluffs with wild, wide-open sea views make this park a favorite spot with hikers and mountain bikers. The northern half of the park features sand dunes and an ancient marine terrace visible due to seismic uplifting.

Spooner’s Cove, once used by smugglers, is now a beautiful sandy beach and picnic area. If you go tide-pooling, you’ll see starfish, limpets and crabs – be sure not to touch them. Nearby is a primitive campground.

Best secret beaches around the world

The post 12 best secret beaches in the US for 2022
appeared first on Lonely Planet Articles.