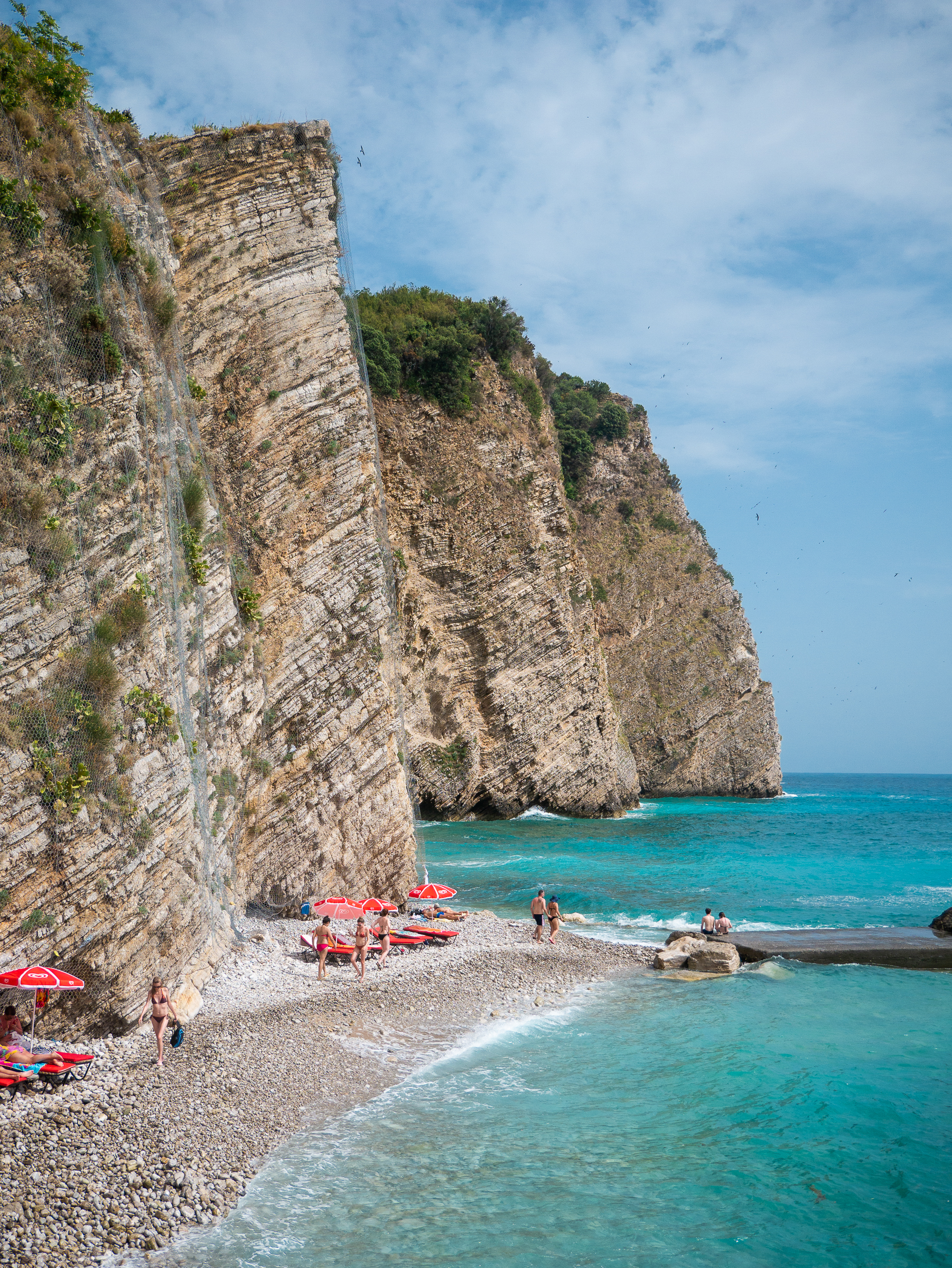 
Montenegro is one of my favorite countries in all of Europe. This tiny Balkan country often gets overlooked and a lot of people I speak to admit they’ve never even heard of it. Yet Montenegro is one of the most beautiful places in the world, with crystal clear waters, medieval villages and beaches backed by majestic mountains.

Budva is a coastal town that sits on the Adriatic Sea and its fairly close proximity to Tivat Airport makes it a popular vacation spot. The town is just a 30-minute drive from the airport and boasts several lovely beaches as well as a picturesque Old Town filled with restaurants.

I’d highly recommend stopping in Budva on your Montenegro Itinerary, especially if you want a relaxing beach break.

Let’s take a look at the best things to do in Budva, Montenegro:

Best things to do in Budva

Budva Old Town (Altstadt) is over 2,500 years old, so it definitely deserves its title! The town is incredibly pretty, with a labyrinth of narrow streets and squares.

With numerous restaurants, bars, cafes and boutiques, The Old Town is a great place to visit for dinner or to do some souvenir shopping.

The Budva Ballerina Statue, also known as “Gymnast from Budva” is a bronze sculpture of a girl frozen mid-dance, created by Belgrade sculptor Gradimir Aleksić. She stands on a rock guarding Mongren Beach, with the Old Town and the Adriatic Sea in the background. The statue has become a symbol of Budva and makes for some beautiful photos.

Apparently the sculpture was inspired by a local legend about a girl who was engaged to a sailor. He sailed away to make money for the two of them to live together but he never came back. She spent years waiting for him, watching the sea every morning in hope that he would return. Sadly one day he was found dead on the rock where the sculpture now stands.

At the town’s highest point of the Old Town you’ll find Budva’s Citadela Fortress, which was built to protect Budva from attacks. Construction of the Citadel started in the beginning of the 9th century but the buildings that you see today are mainly from the 15th century. It was used as an army barracks during World War 2 and today it is home to the town museum as well as a restaurant and a library.

Budva’s shoreline is known as The Budva Riviera and it definitely reminds me a little bit of The French Riviera. The main beaches in and around the town are Old Town Beach, Beach Greco, Slovenska Plaza and Mogren Beach.

Beach Greco and Slovenska Plaza have the longest stretches of sand and get very crowded during the summertime. Mogren is usually a little less crowded and is backed by rugged cliffs.

If you head east along the coast towards Sveti Stefan you’ll discover Becici Beach, Kamenovo Beach and Przno Beach. If you have a week here then you can easily go beach hopping and try a different beach each day.

Take a Boat to Hawaii

This was my favorite thing to do in Budva! There are boats that will take you out to Sveti Nikola, which is also known as “Hawaii” because of the tropical turquoise blue color of the ocean surrounding it. The island looks like something out of a James Bond movie, with tall, sheer cliffs that tower over the beaches.

Walk along the promenade

The Budva Riviera has a promenade that runs all the way from the Old Town to Sveti Stefan. A walk along the promenade will take you to Slovenska Plaža, Zavala Cape, Bečići Beach, Kamenovo Beach, Pržno and Sveti Stefan. Bring your camera and your bathing suit so you can stop for a swim along the way.

Party the Night Away at Top Hill

Top Hill is the most famous club in Montenegro and is known throughout Europe. Over the years the club has attracted famous DJs such as Fatboy Slim, Eric Prydz and Roger Sanchez. The club is located on Topliš hill overlooking the city of Budva, and has the capacity for around 5,000 clubgoers. It’s only open in July and August though, so if you arrive earlier in the season it will probably be closed. If you love techno music, this is definitely the place to go.

Budva has many restaurants where you can enjoy a romantic dinner. For a delicious seafood dinner, try one of the restaurants along the waterfront. Jadran is the most popular and well-known, serving grilled fish, seafood and meats right on the water. I’ve eaten here a couple of times and the experience has always been magical.

In the Old Town, visit Stari Grad, a restaurant serving traditional Montenegrin cuisine and seafood in a rustic setting.

Another great option is Restoran Rivijera, which serves octopus, grilled prawns and other seafood dishes. The restaurant has a cute courtyard with blue and white checked tablecloths.

If you’re looking for something a bit upscale, try Restaurant & Beach Bar Azzurro, which has a large terrace filled with tables overlooking the bay.

Walk on the Walls

One of the best things to do in Budva is walk on the city walls. There’s an entrance near the Citadel and there’s also a second one on the other side of the Old Town. Visitors just have to pay a €2 entrance fee. Walking along the walls will allow you to see the streets of the Old Town from above, as well as views out to the Adriatic Sea.

While you’re in Budva, make sure you take a taxi along the coast to Sveti Stefan, a small islet that’s home to Montenegro’s most exclusive (and famous) hotel. The journey takes around 15 minutes and is well worth it.

Rooms at this ultra-luxury hotel start at around €700 ($780 USD) per night, so unless you’re wealthy and can afford to shell out for a room, you’ll just want to visit for the day.

Dating back to the 15th century, the island started out as a fortified village that was built to defend against the Turks. By the 1800s it was a small fishing village of about 400 people. The population declined by the twentieth century so the Communist Yugoslav authorities removed the remaining residents and turned it into a hotel that was used by the world’s most powerful elites.

In the 1970s the hotel was frequented by the likes of Princess Margaret, Sylvester Stalone and Sofia Loren, but it fell into decline by the 1990s. Eventually Sveti Stefan was renovated and restored by Aman Resorts, who returned it to its former glory.

You can only visit the hotel unless you’re staying there or if you make a reservation at the restaurant. However you can still enjoy the views and relax on the pink sands of Sveti Stefan

Beach, which is open to the public.

This 15th century Serbian Orthodox monastery is located on a hillside on the edge of Budva. It features two churches – the smaller one was built some time in the 15th century and the larger one was built in 1747. It’s a quiet and relaxing place, with beautiful views over the bay. Nearby there’s a lookout point which is ideal for taking pictures of Budva from up high.

Opened in 2016, Aquapark Buva is Montenegro’s largest water park. What’s really cool about this water park is that it’s located on Mount Topolis, so the views are incredible. Covering an area of 41,800 m², the enormous complex features several pools and water slides, plus a multitude of kid’s attractions. In case you get hungry, there’s a restaurant and three bars on site.

If you fancy doing something more adventurous, try paragliding with Budva Paragliding. The company offers tandem flights with a variety of routes over Budva, Sveti Stefan, Hawaii and Bečići.

Is Budva worth visiting?

Yes, Budva’s definitely worth visiting. The Budva Riviera is stunning, so if you’re a beach lover you’ll really enjoy it here. In summer the town really comes alive and the atmosphere is really fun. The beaches and restaurants are filled with tourists and there’s a vibrant nightlife scene. Budva is alos known for its enormous open-air nightclub, Top Hill, which attracts DJ’s from around the world.

Which is better, Budva or Kotor?

Budva and Kotor are quite different but both are worth visiting. Kotor’s Old Town is larger and more impressive than Budva’s, with more things to see and do. Kotor lies on the Bay of Kotor, which is magnificent and fjord-like, but there are only some small pebbly beaches dotted around the bay. Budva lies on the Adriatic Coast, with access to numerous beaches. If you like nightlife, then Budva is the better choice for you since it’s home to an enormous club as well as numerous beach clubs and bars. Kotor is generally much quieter at night. If you’re a history buff then you’ll probably prefer Kotor, but if you’re a beach lover then you may prefer Budva.

Budva is not necessarily cheap but it’s generally cheaper than major cities in the U.S and some other countries in Europe.

What is Budva known for?

Budva is known for its medieval Old Town and Ballerina Statue, also known as the Gymnast Statue from Budva. The Budva Riviera is dotted with beautiful beaches and is home to one of the world’s most exclusive island resorts, Sveti Stefan.

How many days in Budva?

If you’re a sun worshipper then you could easily spend a week in Budva just sunbathing on the beach and eating out. However, if you’re the kind of person who gets antsy at the beach, I’d suggest spending about 3 days max here and then exploring other places such as Kotor, Lake Skadar and Durmitor National Park.

Budva is a fantastic place to visit if you’re looking for a European summer beach break. With scenic beaches and water so clear you can see right to the bottom, it’s definitely one of the best destinations in Montenegro. This country is one of the prettiest and most scenic places in the world, so I’d recommend combining Budva with a trip to Kotor as well.