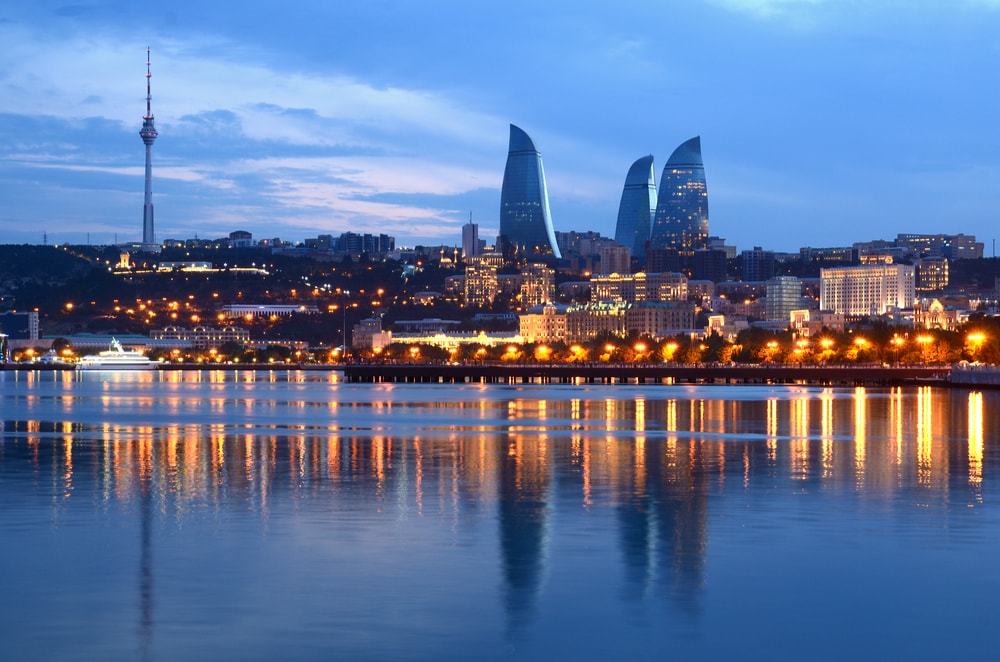 
Here’s a list of the 15 best things to do in Baku (Azerbaijan), along with famous landmarks, museums, and other points of interest.

Baku is the capital of Azerbaijan and the largest city on the Caspian Sea in Asia. It might not be the first choice for most international tourists, but in recent times, the city of Baku has become a major city for international events.

There are several sites in Baku that have been listed as UNESCO World Heritage Sites, and Lonely Planet has ranked Baku as one of the best cities for urban nightlife.

In this article, I’m sharing some of the best places to visit in Baku as well as attractions that shouldn’t be missed while visiting.

Ischerisheher, Baku’s Old City, is one of the highlights of the city as the walled-in neighborhood oozes historic charm, atmosphere and almost seems like a time capsule compared to the skyscrapers surrounding it.

The Old City features many old mosques, hammams, and palaces that are worth exploring. The many vendors that are still to be found here these days remind of the days when Baku was an important stop along the Silk Road.

Ischerisheher is also a place where traditional foods and drinks can be found, don’t miss the fantastic baklava sold here and the atmospheric tea houses.

The architects of Haha Hadid have been the leading force behind Baku’s transformation from Soviet-era architecture to some of the most impressive modern buildings that can rival those of any city in the world.

Dedicated to the architects is the Heydar Aliyev Cultural Center, a building that stands like no other for this new era of optimism. It is impossible to put the architecture of the building into words, it’s just breathtaking.

Apart from its futuristic design, it serves as the city’s main cultural center and acts as a venue for live-events.

Flame Towers symbolize Azerbaijan’s history of fire worshiping as the area is known as the ”region of eternal fires”. The site consists of three flame-shaped towers.

These towers can be seen from many places in the city and have become one of the landmarks of the area. As with most skyscrapers, they serve as office buildings, feature a hotel as well as many luxurious apartments, shops, and a viewing platform.

One of the most unique aspects of the towers is their LED lighting at night, all three of them are lit in a yellow-orange-red color combination that resembles fire.

When visitors approach the museum it becomes very quickly obvious that they are at the right address as the entire structure of the Azerbaijan National Carpet Museum is shaped like a big brown carpet.

Apart from its interesting design the museum offers a collection of historic carpets and explains to guests about the local carpet-making traditions. Weaving techniques and materials from the different eras of Azerbaijan’s history are on display.

Maiden Tower is considered the oldest structure in Baku’s Old City. It is considered a symbol not only of the city but the entire country and is even printed the Azerbaijani Manat, the national currency.

The structure is around 30 m tall and is a real mystery as no one really knows when it was built and what functions it used to have. The Maiden Tower is listed as a UNESCO World Heritage Site and shouldn’t be missed.

The nearby Fire Temple of Baku is also listed by UNESCO. The temple used to serve as a place of worship for Hindus and followers of the Zoroastrian religion.

This temple takes its name from the eternal gas flame that used to burn here until 1969.  The site consists of a pentagonal complex, a courtyard, the homes of the monks, and the tetrapillar altar located in the center of the site.

Baku’s Museum of Miniature Books is the only one of its kind in the entire world and offers a collection of 6500 books from 64 different countries. The purpose of this institution is not just to entertain its guests but also to support childhood literacy.

Many of the books date to the Soviet era and come from the many former Soviet republics, and there are also other exhibits like a 17th century Quran, the holy book of Islam.

The museum consists of different sections that all have their own theme. Visiting the Museum of Miniature Books is one of the best things to do in Baku with kids.

Another reason why Azerbaijan is often called the ”region of fire” is the surprising number of mud volcanoes. There are around 350 of them to be found in the nation, making Azerbaijan the country with the most mud volcanoes in the world.

Since 1810 there have been about 200 eruptions, usually featuring a large flame, a strong explosion and the leakage of gasses from deep within the earth.

There are plenty of guided tours available that start from Baku and bring visitors to some of the best mud volcanoes of the area.

One of Azerbaijan’s most beautiful and significant mosques is the Bibi-Hebyt Mosque. The mosque was built in the 1990s as a replica of the 13t century mosque destroyed by the Soviets in 1936.

This mosque also features the tomb of Ukeyma Khanum who is considered a descendant of Muhammad. One of the highlights of the building is its beautiful green ceiling.

Yashil Bazaar, also called the Green Market, is the city’s biggest and should not be missed when visiting Baku as it is a fantastic hub of trading, culture and history dating to the days of the flourishing Silk Road.

Today the market is known for its fantastic food. Many people come here to buy the best nuts and dried fruits from all over Azerbaijan, as well as figs, oranges, and other fresh produce.

Gourmets might also find the Beluga Caviar on offer here. Don’t forget to haggle, as it is typical for bazaars, every price is up for negotiation and haggling with the friendly vendors not just saves you money but is also fun and a great way to experience the local culture.

Baku’s promenade is a very scenic place for relaxed walks surrounded by the waters of the Caspian Sea on one side and the beautiful architecture of the city on the other.

The boulevard was established in 1909 and has since then served as one of the most popular meeting spots for locals. Taking a seat on one of the many benches and enjoying the fountains or people-watching is a great experience.

Heydar Mosque is the youngest major mosque in the city and has only been inaugurated in 2014. One of the major highlights of the site are the four 95 m high minarets.

The facade of the building is built in the Shirvan – Absheron style of architecture and is decorated with special stones. The mosque is particularly beautiful at night when it is lit up with numerous floodlights making the Heydar Mosque shine in a virgin-white hue.

Highland Park is the perhaps most scenic area of Baku as it offers an unparalleled panorama of the city’s skyline and boulevard. The best time of the day to come here is at night when the beautiful lighting of the city gives it a special atmosphere.

The terrace of the park offers not just great views but also a restaurant and plenty of benches to relax. It’s a great place to get some natural scenery after some city sightseeing.

Baku’s Railway Station, dating back to the 19th century, is one of the major transport hubs of the city and has recently undergone extensive renovation works turning it into a modern facility while at the same time retaining its historic beauty.

The station is worth checking out even for non-travelling guests as it also acts as a commercial center.

The Musical Stone of Gobustan is located in a breathtaking environment of mud volcanoes, rock formations and burning gas vents. This stone has gotten its name from the unique sound it makes when it is hit by smaller objects.

Due to this phenomenon, the stone has been used for centuries as a musical instrument for rituals. The stone’s popularity even made it appear in the 2012 Eurovision Song Contest.

I would say that the best way to get here is by joining a guided tour from Baku. I can warmly recommend making the excursion here.

Want more recommendations on things to do in Baku, Azerbaijan? Leave a comment below!