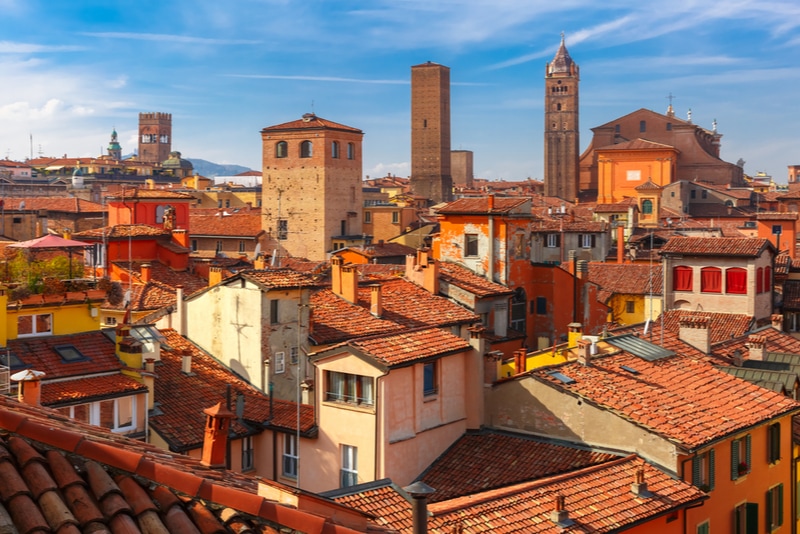 
Here’s a list of the 15 best things to do in Bologna (Italy), along with famous landmarks, museums, and other points of interest.

The Two Towers of Bologna are one of the city’s main landmarks and can be found right in the heart of the city. They were initially meant to serve a military purpose and had a signaling and defense function.

However, soon the towers became more of a symbol of prestige and started to serve a representative purpose. The recently renovated Asinelli Tower is open to the public while the Torre Garisenda, known for its incredible overhang, is closed and undergoes restoration works.

Teatro Anatomico is a fascinating 17th-century building that was used for body dissections which were only allowed to be performed under the supervision of an Inquisition priest at that time.

There is a marble-topped table located in the center of the structure which was the place of the dissections. The Teatro Anatomico is definitely one of the most unique attractions of the city and also features a grand classroom and a library.

Sanctuary of the Madonna of San Luca is a basilica church located on a forested hill around 300 m above the city. The best way to get to the sanctuary is a monumental 3.8 km arcade consisting of 666 arches.

Alternatively, there is also a road leading up to the sanctuary in case you aren’t interested in hiking along the beautiful footpath. The baroque sanctuary has a very tranquil atmosphere but also offers many beautiful artworks such as paintings of Domenico Pestrini.

Santuario di Santo Stefano encompasses a complex of edifices found right in the center of Bologna on the Piazzo Santo Stefano. It is often called the ”Sette Chiese” (Seven Churches).

Archiginnasio of Bologna used to be one of the most important buildings of Bologna’s university as it houses not only the Anatomical Theater but also the beautiful Biblioteca Comunale dell’Archiginnasio.

The building offers a monumental porch that is almost 140 m long and consists of thirty arches supported by many columns. Coming here is worth it for the impressive architecture alone.

Make sure not to miss the interesting coat of arms representing the students elected by the local student organizations.

The ark of the church features sculptures by Michelangelo and others and is an absolute highlight. The wooden choir is a true Renaissance masterpiece and shouldn’t be missed.

Apart from its fantastic artworks and choir the structure also features a fantastic Gothic-style tower and a library containing around 90.000 volumes of Dominican philosophy.

Bologna also offers a great attraction for history buffs, the Archaeological Civic Museum of Bologna. Many great finds from excavations of Bologna and its surroundings are on display here making it one of the best places to learn about the ancient history of the city.

The display range from finds of the prehistoric period to the Roman Age. Apart from the interesting exhibits, the museum is also located in an interesting building that was once known as Hospital of Death.

Oratory of Battuti was built in the 17th century and houses a number of great artworks including ”Madonna with child and Saints” of Nosadella and the ”Transit of the Madonna” by Alfonso Lombardi.

This oratory is a real paradise for art lovers and impresses not just with its art but also with its fantastic architecture which, despite the many centuries that have passed since its construction, is still in great shape.

The Oratory of Battuti is adjacent to the Sanctuary of Santa Maria della Vita, built in a beautiful Baroque-style.

The world-famous Tortellini, an Italian pasta specialty, originated in or around Bologna in the 15th century. What better place to try these ring-shaped stuffed noodles than here?

Tortellini are traditionally filled with meat, egg, and cheese and many restaurants in the city specialize in making them. Many restaurants like the Sfoglia Rina – Bologna sell great handmade tortellini that taste much better than the industrially produced products we normally find in our supermarkets.

The Fountain of Neptun, or the Fonatana del Nettuno in Italian, is a beautiful sculpture of the Roman god of water. The statue is surrounded by mermaids and beautiful decorations.

This fountain was built in the 16th century and is located on the Piazza del Nettuno, adjacent to the Palazzo Re Enzo. The fountain shouldn’t be missed when visiting this historic neighborhood.

It is very easy to combine a visit to the Fontana del Nettuno with visits to the numerous palaces nearby as well as the fantastic Piazza Maggiore offering many cafes and bars.

Quadrilatero is a historic neighborhood that is mainly known for its great market which dates all the way to the Middle Ages. There are many specialized shops found here that have largely retained their historic character and craft.

However, if you aren’t keen on shopping you can simply enjoy a nice walk through the small alleyways of this neighborhood and take in the historic atmosphere that dominates it.

Piazza Maggiore is surrounded by numerous palaces and the beautiful Fontana del Nettuno and is home to a large number of cafes, restaurants, and bars.

Sitting on the square, enjoying a coffee, and taking in the panorama of the splendid buildings surrounding the square is an unforgettable experience.

The Piazza Maggiore is not just the heart of the city but also one of the most beautiful squares in all of Italy. No one should visit Bologna without coming here at least once.

Museo Internazionale e Biblioteca della Musica is a cultural highlight of the city and a true paradise for lovers of classical music. The site features a fantastic music museum and houses a great collection of musical instruments of the various centuries and aims at raising the public’s awareness of Bologna’s great musical heritage.

The library was inherited from Padre Martini and is considered one of the most prestigious collections of printed music repertory. It features many valuable manuscripts, autographs, and opera libretti. Martini kept a close relationship to many artists of his time and his corresponding letters are also on display.

The Teatro Comunale di Bologna is the city’s most prestigious opera house and is considered one of the country’s best. The theatre typically plays eight operas from November to April and closes during the summer months.

Teatro Comunale di Bologna is very classical and elegant and all the performances are real cultural events attracting many members of the city’s upper class. It is also known for its fantastic ceiling and its monumental chandelier and also impresses with fantastic acoustics, making it a truly world-class venue for operas.

Something that makes Bologna world famous is the classical Bolognese, a pasta dish enjoyed by almost everyone in the world. The sauce typically consists of a soffrito of onion, celery, and carrot as well as minced beef and small amounts of pork.

Then tomatoes are added as well as white wine and milk. Similar to tortellini there are many restaurants specialized in the dish and having a great Bolognese is something that just can’t be missed when coming to Bologna.

Want more recommendations on things to do in Bologna, Italy? Leave a comment below!