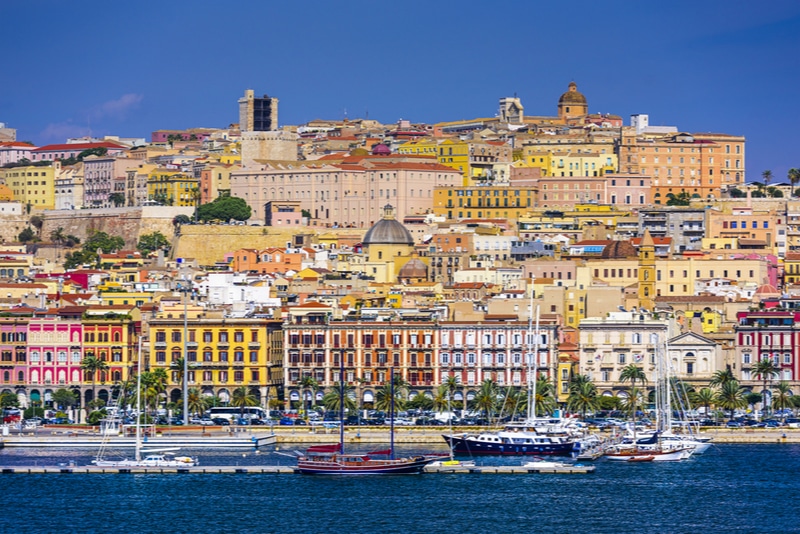 
Here’s a list of the 15 best things to do in Cagliari (Italy), along with famous landmarks, museums, and other points of interest.

Bastione San Remy is one of Cagliari’s most impressive building and dates to the early 10th century when it was built as a bastion of the fortifications of the city.

Today the bastion is a symbol and landmark and one of the must-visits when coming to this part of Sardinia. The bastion features a fantastic terrace and a covered gallery that is just breathtaking.

However, the highlight of the site, and one of the most popular motives for photographers, is its beautiful limestone arch. The bastion serves not just as a touristic attraction but also as a cultural center and several events are held here each year.

Torre dell’Elefante is a medieval tower and one of the most monumental structures in Sardinia. It served as a major part of the city’s defense and overlooks large areas of the city.

The 14th century tower is built of limestone and reaches a height of around 40 meters.  The Torre dell’ Elefante has gotten its name from the beautiful elephant that is decorating its façade.

During the centuries the tower has experienced many troublesome times and even became the site of the horrific Spanish tradition of exhibiting the decapitated heads of people sentenced with a death penalty.

The San Benedetto market is the largest covered market in Europe and was established in the 1960s to act as a commercial center for the farmers of the surrounding countryside as well as local fishermen.

This local market is open each day except for Sundays and the best time to come here is during the early morning hours as this is when the market is the busiest. The cafes and restaurants surrounding the market are a great place for snacks and fresh food.

Museo archeologico nazionale is one of the most interesting museums of the city and offers findings from the pre-Nuragic and Nuragic age up to the Byzantine age.

Many prehistoric bronze statuettes are displayed as well as stone statuettes of female divinities and even a reconstruction of a Phoenician settlement.

Additionally, the museum features an interesting collection of wax models made by the sculptor Clemente Susini based on dissections of the anatomist Francesco Antonio Boi. The building housing the museum is of historic significance and served as an armory.

The Cathedral of Santa Maria is a religious highlight and is the seat of the archbishop of Cagliari. It was built in the 13th century in a beautiful Pisa-Romanesque style but received Baroque modifications when it was renovated in the 17th and 18th centuries.

The current facade of the cathedral is built in a Neo-Romanesque style and was inspired by the Cathedral of Pisa. The cathedral’s interior features many great artworks including sculptures, paintings, and a beautiful Flemish triptych.

Furthermore, there are also 179 niches found here that each contains relics of martyrs of Cagliari.

Poetto is the most popular beach of Cagliari and its surroundings and features a very wide stretch of sand that is a fantastic playground for kids and people in search of relaxation and sun. Sunbeds and umbrellas are available for rent.

Poetto is also known for its great nightlife. There are many bars and nightclubs located here and both tourists and locals party throughout the night in Poetto. During the summer months, there are many live concerts taking place here as well as other shows.

The Quartiere Castello is a historic neighborhood that is considered Cagliari’s most interesting and is the perfect place for exploration. Simply head here and start walking, there is no need for maps as many interesting sights are located nearby.

The castle of Cagliari acts as the namesake of the neighborhood and is located here. But it’s not just the castle that is interesting, there is also an endless array of squares and alleyways found here that is worth exploring.

The different elevation levels of the area add to its attractiveness and make many little streets feel very secluded.

Santuario e Basilica di Bonaria, known as the Shrine of Our Lady of Bonaria in English, is an interesting religious site dedicated to Bonaria, the patron of sailboats also called Lady of Fair Wings.

It was constructed in 1335 and is part of a catholic complex including a monastery and a basilica. The symbol of the site is the Virgin Marry carrying a young Jesus on a golden sailboat.

Portrays depicting this motive can be found along with the complex. Coming here is also worthwhile to learn about the Spanish influences on Cagliari as the complex features a lot of information about the area’s past.

Orto Botanico dell’Università di Cagliari is one of Sardinia’s most beautiful botanic gardens and offers 5 hectares of beautiful greenery to its visitors.

It was inaugurated in 1866 and today contains around 2000 species mostly consisting of Mediterranean plants as well as a few tropical exhibits and some succulent plants.

Particularly interesting is the garden’s palm collection that stretches over 4000 m² featuring ancient Roman cisterns and even natural caves.

The Roman Amphitheatre of Cagliari is a very interesting site. It was built in the 2nd century AD and was partially carved into a rock. The way it is integrated into nature is truly breathtaking as the white limestone perfectly blends into the surrounding rocks.

Even though some parts of the amphitheatre haven’t been preserved the site still regains enough of its initial beauty to amaze visitors. The theatre isn’t in use anymore but can be visited by the general public.

Palazzo Regio is the ancient residence of the King of Sardinia. It was used during the Aragonese, Spanish, and Savoy rule of the island and today serves as the seat of the Metropolitan City of Cagliari.

The building was constructed in the 14th century and has since then underwent many modifications and changes during its lifetime reflecting the frequently changing rule of Sardinia.

The palace is open for visitors and offers a splendid interior featuring many great artworks, grand halls, and much of the historic furniture used here in past centuries.

Parco di Monte Urpinu is a green oasis situated right in the center of Cagliari. The park is located on and around a hill that offers fantastic panoramas of both the sea and the city.

There are various viewing platforms that are connected by a network of trails. All the footpaths are easy to walk on and are well-maintained. The park almost makes you forget you are right in Cagliari as the atmosphere here is just so idyllic.

Kids will love the many ducks and peacocks found here as well as the playgrounds.

Just a few kilometers south of Cagliari lays the breathtaking Parco Naturale Molentargius-Saline. It is considered one of the most beautiful parks in Sardinia and allows visitors a unique combination of history and science.

There are many well-maintained pathways available that offer easy access to the park, making it one of the best spots on the island for a leisurely stroll.

The name of the park is related to the ancient salt basins found here. Parco Naturale Mlentargius-Saline is particularly known for its pink flamingos which have their nesting place in this area. The park can also be explored on a bicycle.

The beach of Calamosca is located just south of Cagliari and offers a stretch of sand nestled into the rocky coastline of this part of Sardinia. There are a few hotels and restaurants here but the beach is generally rather quiet.

One of the most beautiful aspects of the beach is the vivid water that offers a stunning hue of blue and turquoise. The area surrounding the beach is great for hikes and there are many scenic spots along the cliffs of the coast that offer great views and total serenity.

Castello di San Michele is a fortress from the time of the Judicatures and today serves the city and its visitors as a historical monument and exhibition site.

It is built in an elevated position on one of Cagliari’s seven hills offering great views. Many people come here for the fantastic sunsets making the castle a great place for photographers.

Despite its interesting history and great location the Castello di San Michele is not overly crowded and feels very intimate. There are also plenty of great hiking trails surrounding it.

Want more recommendations on things to do in Cagliari, Italy? Leave a comment below!