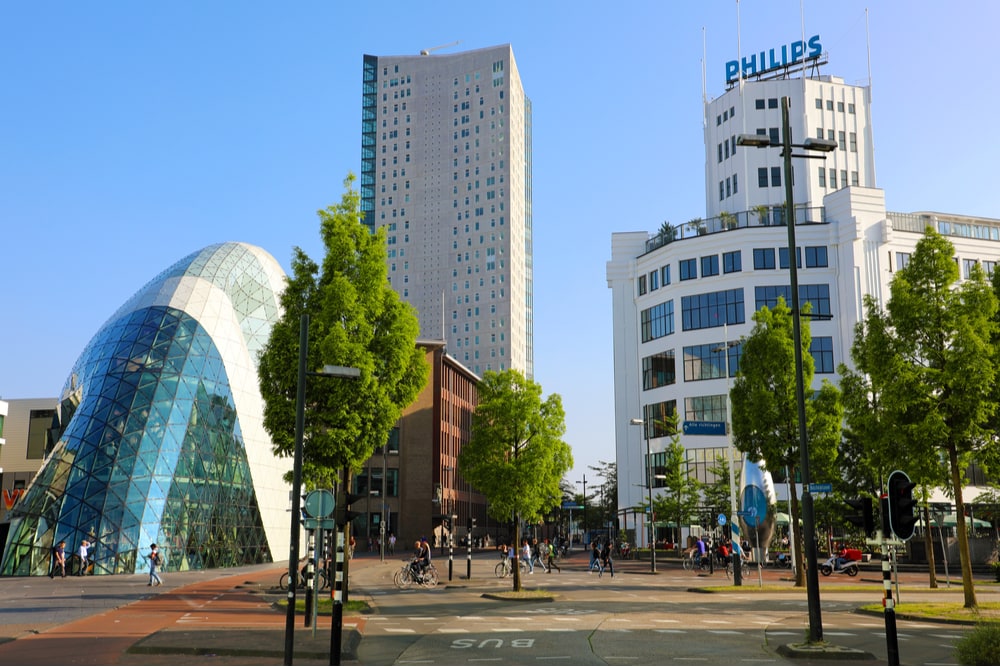 
Here’s a list of the 15 best things to do in Eindhoven (Netherlands), along with famous landmarks, museums, and other points of interest.

Eindhoven is one of the largest cities in the Netherlands with a population of circa 355 000 people in 2019. When it was founded in 1232 it was just a small town, but since then it has grown into one of the major Dutch cities with a big tech-business.

In this article, I’m sharing some of the best places to visit Eindhoven as well as attractions that shouldn’t be missed while visiting.

Stadtsbrouwerij is one of the most popular brewpubs of the Netherlands and is known for producing fantastic craft beer. The beer produced here is called ”100 watts” and has won many awards.

The Stadtsbrouwerij offers a guided tour around the brewing facilities, explaining all the little details of what makes a great beer. There are also tasting events held here. Reservations for both the tour and the beer tastings need to be made in advance.

Sint Catharinakerk is one of the landmarks of the city and features two 73 m high towers that are a major part of the city’s skyline. The 19th-century church was designed by Pierre Cuypers and was built in a Neo-Gothic style of architecture.

Saint Catherine’s Church, as it is known in English, is also home to the largest organ of the Netherlands and is known for its beautiful rose windows. The building has been declared a national monument in the 1980s.

DAF Museum is dedicated to the manufacturer DAF which is based in Eindhoven and produces its trucks here since 1928. The museum showcases many historic DAF models including some of the cars produced by the company during the years after the Second World War and the trucks made here during the early years of the 1930s and 1940s.

There is also a so-called ”Trucknasion” to be found here, a section dedicated to teaching young visitors about mobility, sustainability, and road safety.

PSV Eindhoven is one of the best teams in the Netherlands and also a regular member of the Champions League, Europe’s top competition. The team has won 24 Eredivise-Titles, 9 KNVB-Cups, one Champions League Trophy, and the UEFA-Cup.

The Philipps Stadium, which serves as the home of the PSV, is a great place to witness high-level football and experience the local fan culture. Football fans should not miss it.

Van Abbemuseum is a great contemporary and modern art museum located on the banks of the Dommel River in central Eindhoven. It is dedicated to Henri Van Abbe, a great art collector of the early 20th century.

Today the site features a collection of around 2700 artworks, including the works of many famous painters such as Pablo Picasso. The Van Abbemuseum is located in one of the most interesting buildings in Eindhoven as it consists of an old wing and a new wing that couldn’t be further apart in their design.

While the old wing is a classical, red-brick structure the new wing is a breathtaking example of modern architecture making use of a futuristic design that just has to be seen when visiting the city.

Eindhoven’s Down Town Gourmet Market is the best destination in the city if you are a food-lover. It offers 21 individual eateries on one property and also offers two bars and a social hub.

The eateries vary from fast-food stalls to noble restaurants. The food on offer here is a mix of traditional Dutch food and international cuisine. No matter what food you like you will not be disappointed at the Down Town Gourmet Market.

The theme park preHistorisch Dorp (in English: prehistoric village) is unlike any of the theme parks you have likely been to in the past. It offers visitors the unique experience of what life was like in the early days of human civilization.

You get to experience how farm work was done or what techniques people used to hunt animals. There are also many interesting prehistoric houses on display that give an idea of how families lived thousands of years ago.

The unique structure Evoluon is a landmark of Eindhoven and is one of the most impressive buildings in the Netherlands. It was erected in 1966 and today serves as a conference center.

Evoluon looks like a flying saucer and, due to its large concrete dome with a diameter of 76 m, it looks like an object that comes straight from an Alien movie.

Lichtjesroute is an annual festival taking place in Eindhoven. It starts during September and features a parade celebrating the liberation of the city from the German Reich during the Second World War.

Lichtjesroute can be translated to the ”Route of Lights” and the festival very much lives up to its name as there are various ornaments made from light along the way. They usually depict images of the Second World War.

Park Theater is Eindhoven’s premier venue for live-events of all kinds. The modern theater is solely dedicated to delivering its guests performances of the highest standard.

It also boasts very modern stage technology, perfect acoustics, and a very comfortable viewing experience. There are more than 500 shows here every year and no matter when you visit the city there will always be something interesting played here.

The global powerhouse Philips is seated in Eindhoven and is closely intertwined with the city and its history. It comes as no surprise that there is also a fantastic museum dedicated to the company here.

This museum offers not just a detailed overview of the company’s history and its products but it also offers many educational exhibits that teach visitors of all ages about interesting inventions made by the company.

Young visitors will enjoy the Kids Factory as this is a place where children can get their hands dirty and work on electrical circuits while using all kinds of interesting tools.

The Bottle Distillery is an interesting manufacturer of handmade gin, rum, vodka, and various liqueurs. The tasting room and bar are the perfect place for tasty drinks and fantastic food and are one of the gastronomical highlights of the city as it offers the first-class cuisine in a relaxed setting.

If you are interested in the products made here, you can take part in a guided tour and learn more about how the various alcoholic drinks are made here.

The Dutch post-impressionist painter Vicent Van Gogh is considered one of the most influential European artists and has created many fantastic artworks that impress millions of people to this day.

Van Gogh Village Neunen is dedicated to him and showcases many aspects of his private life as well as his artistic breakthrough in Neuen, one of the domains of his life.

The history of the painting “The Potato Eaters”, often considered Van Gogh’s first masterpiece, is one of the most interesting aspects of the museums.

Stadswandelpark is located a few kilometers south of the city’s center and is one of the best spaces of greenery in Eindhoven. It offers great trails, many ponds, and plenty of benches and meadows that welcome everyone in need of some relaxation.

There is also a charming sculpture park here that shouldn’t be missed when coming to the Stadswandelpark. Many of the city’s residents come here to meet or have a picnic during the weekends.

Genneper Parken is adjacent to the Stadswandelpark and offers plenty of recreational value. You can play mini-golf here, make use of the swimming pool or visit the picturesque Pavilion Genneper Parken, a fantastic restaurant situated in lush greenery.

During the winter there is also a popular ice-skating rink to be found here. If you are interested in culture you can visit the Eindhoven Museum.

Or alternatively, if you are interested in fun and entertainment, the Ton Smits Huis cartoon museum. Of course, the park also offers plenty of greenery, nice footpaths and plenty of relaxation.

Want more recommendations on things to do in Eindhoven, Netherlands? Leave a comment below!