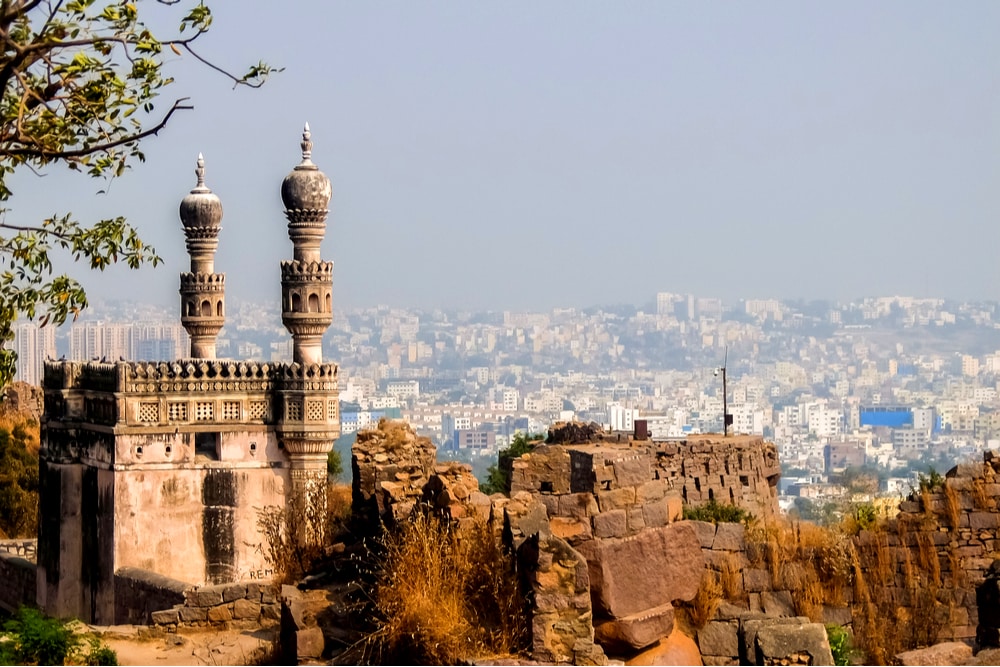 
Here’s a list of the 15 best things to do in Hyderabad (India), along with famous landmarks, museums, and other points of interest.

The Visa Balaji Temple is one of the most unique sights of Hyderabad. The ancient Hindu temple is dedicated to Lord Balaji and is located on the banks of the river Osman Sagar.

Its actual name is Chilkur Balaji Temple but it is more commonly called “Visa temple” based on the local belief that praying here helps you to get your desired Visa.

This makes the temple a very popular site amongst Indians planning to go abroad. Western visitors come here to experience the atmosphere and marvel at the colorful temple. It’s also a great place to learn more about Hinduism.

The Fort of Golkonda used to serve as a citadel during the 16th and 17th centuries and was used to defend the nearby diamond mines which produced some of the most famous diamonds in the world.

It is located on a scenic hill offering a great panorama of Hyderabad. The ruins of the fort are generally in decent shape and tell an interesting story of life in India centuries ago.

Particularly interesting is the Baradari fort located on top of the hill as well as the Mosque of Ibrahim.

Chowmahalla Palace is one of the must-visits when coming to Hyderabad. The palace served of as the seat of the Asaf Jahi dynasty and the once ruling Nizams.

The actual translation of its name “Chowmahalla” is “four palaces”, a name referring to the design of the palace with its four separate towers.

This palace was designed in a Persian-style and its highlight is undoubtedly the opulent Durbar hall. The site was awarded the UNESCO Asia Pacific Merit award for conservation efforts.

Hyderabad’s garden precinct, Ibrahim Bagh, is home to the interesting Qutb Shahi Tombs. They serve as the final resting place of the kings of the Qutb Shahi dynasty and feature a mosque built by the family.

Each tomb is dedicated to one person and features a sarcophagus that is built over the actual burial vault. The tombs are located in beautiful gardens inviting for walks and offer plenty of shade and well-maintained footpaths.

The Charminar mosque was constructed in the 16th century and has since then been an important landmark of the city. Its name means ”four minarets” and refers to the interesting construction style of this mosque.

Charminar is not just known for being an important mosque used by thousands for prayer each week but also for being the scene of a great market that takes place here regularly.

The Charminar is also one of the buildings recognized as a National Landmark by the Archaeological Survey of India. Visiting this fantastic building can easily be combined with a visit to some of the surrounding sites such as the Makkah Masjid and the Lad Bazaar.

Ramoji Film City is the world’s largest integrated film studio and spreads over an impressive 1666 acres. In recent years the studio has become an increasingly popular tourist attraction as it offers many natural and artificial attractions that are worth exploring.

The site is particularly interesting for movie lovers that are keen to experience film requisites but also for children just wanting to have some fun. There is even an amusement park that can be enjoyed here.

Laad Bazaar is one of the most interesting markets in Hyderabad and specializes in lacquerware and so-called bangles, traditional bracelets, that are very popular all over the Indian subcontinent.

They are usually made of metal, wood, or plastic and are worn by women. The market also sells various wedding accessories and fake jewelry. There are also some artistic works on display such as paintings and silverware.

Coming here and exploring all the interesting products on offer by the vendors is a great way to spend some hours experiencing authentic Indian culture.

Makkah Masjid is named after the famous Muslim pilgrimage site Mecca. It is one of the most impressive mosques in Hyderabad with a capacity of 20,000, making it an important site for Muslims in the city.

The most interesting aspect of the mosque is that bricks made of soil from Mecca were used for the construction of this mosque. Don’t miss the impressive arched gallery featuring the tombs of the Nizams from the early 19th century.

Birla Mandir is the collective name of the temples made by the Birla family. They were built all over the subcontinent and were donated by the family to cities that didn’t have a large collection of their own Hindu temples yet.

All the Birla Mandirs are beautiful temples often built of valuable materials like marble. The Birla Mandir in Hyderabad is no exception and offers not just great architectural beauty due to the white marble used.

It is also dedicated to Lord Vishnu himself and offers well-organized worships and discourses. The temple is also located in a slightly elevated position offering great views of the surroundings.

Biryani is one of the most popular Indian dishes and the so-called ”Hyderabadi Biryani” is said to be one of the best on the subcontinent. The unique mix of tender meat, Zaffran, and local spices make this Biryani extremely delicious.

The meat used for the dish is usually marinated in yogurt and gets a particularly fresh taste from a few drops of lemon juice added to it. Finding great Biryani is very easy in Hyderabad.

Keep in mind that the small local food stalls and street food vendors often serve the best and most authentic dishes and there is no need to visit a fancy restaurant to experience a fantastic Hyderabadi Biryani.

The so-called Koti Residency was designed by Samuel Russell, a Lieutenant serving the Madras Engineers. The building, and in particular its splendid facade featuring eight Corinthian columns, used to symbolize the wealth and power of the British Empire.

Unfortunately, the building has also become a symbol of the decline of the empire as it decayed for centuries. It was only recently that restoration works on the residence started, aiming at restoring its architectural beauty and turning it into a tourist attraction.

The building has not yet opened its doors for visitors but coming here and marveling at the beauty of its exterior is still worth it especially because there is a park with nice greenery nearby.

Runway 9 is a great place if you want to escape the historic side of India and dive into some fast-paced adrenaline-inducing action. The go-kart track offers many different karts for rent and also offers basic driver training.

The track has a length of 711 m and is considered one of the oldest and longest in India. It is well maintained and safety is a priority here. The site also offers laser combat, a bungee trampoline, a shooting range for archery, and more.

Visitors of every age group will find an excursion to Runway 9 fun and exciting.

Falaknuma palace originally belonged to the Paigah family and is today one of the most beautiful buildings of the city. It is situated on a small hill and offers 13 hectares of beautiful gardens surrounding the magnificent palace building.

The name Falak-Numa means “Like the Sky” in English and is a fitting description for this white, heavenly designed structure. Today the palace serves as a luxury hotel offering all the modern amenities you would expect in a fantastic, historic setting that is brimming with elegance and splendor.

Hussain Sagar Lake is one of the most historic lakes in Hyderabad and was created in the 16th century. After years of pollution, the city and many engaged citizen groups have made great progress and turned the lake into a popular recreational spot.

Today many people come here to sail or just enjoy the scenic views towards the Buddha statue located on a small island in the middle of the lake.

Jagannath Temple is another interesting Hindu temple that can be found in Hyderabad. The temple is incredibly old and was built in the 10th century.

Today the site is particularly known for the Ratha Yatra, a chariot festival during which deities are pulled on decorated temple cars. The festival is held during June or July each year and shouldn’t be missed when coming to Hyderabad during this time.

Want more recommendations on things to do in Hyderabad, India? Leave a comment below!