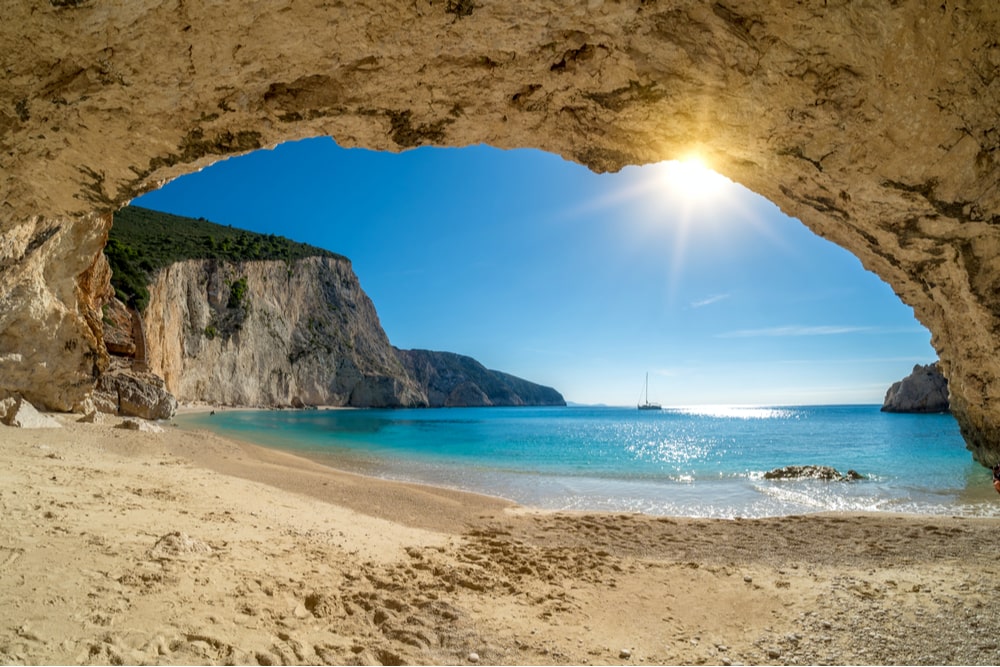 
Here’s a list of the 15 best things to do in Lefkada (Greece), along with famous landmarks, museums, and other points of interest.

Lefkada, also known as Lefkas is a Greek island in the Ionian Sea that is connected with the mainland via a long causeway and floating bridge. The island is famous for its stunning beaches with towering cliffs and rugged landscapes.

In this article, I’m sharing some of the best places to visit in Lefkada as well as attractions and beaches that shouldn’t be missed while visiting.

Porto Katsiki is a stunning beach on Lefkada’s south-western coast and is often regarded as one of the country’s most beautiful. What makes the beach so uniquely beautiful are the steep cliffs that surround it.

There are no hotels at the beach and it’s a wild place with striking scenery. The cliffs also offer great viewpoints that allow stunning views and can be reached quite easily on marked trails.

Porto Katsiki is easily one of the most beautiful beaches in Europe as well as on the island of Lefkada.

Just a few kilometers north of Proto Katsiki is the beautiful Egremni Beach. This remote beach is often a destination for boat tours but the beach can also be reached by walking down the steep staircase from the main parking area.

The beach is known for boasting fantastically turquoise colors of the water and the cliffs that rise almost vertically dozens of meters.

The impressive Nydri Waterfalls are located a few hundred meters inland of the namesake coastal town. The waterfalls are surrounded by fantastic nature consisting of lush forests, rock formations, and the waters of the stream.

The parking area is only around 800 meters away from the waterfalls and the footpaths are well-maintained making it an easy destination for visitors of all ages. The walk through the beautiful nature of the area is what makes coming here so special and worthwhile.

The castle of Agia Mavra has been built during the 14th century and has since then been steadily renovated and conserved, making it one of the most impressive buildings of the island today.

This castle initially served as a fortification structure aiding the defense of the town but has soon taken over a more administrative role. Make sure not to miss the impressive Agia Mavra church. It serves as a venue for many cultural events during the summer.

This lovely chapel has been built into the rock above Agios Ioannis beach and dates to the 16th century making it one of the oldest in all of Lefkada.

The church is known for its bell tower and many beautiful Byzantine icons depicting scenes from the bible. It is also rumored that the Apostle Paul has come to this site during the 1st century to preach the word of god.

Regardless if this is true or not, the peaceful atmosphere of the church in combination with the natural beauty of the area are very special and shouldn’t be missed.

Cape Lefkada and the lighthouse

Cape Lefkada is the southern-most point of the island and offers great views over the surrounding Ionian Sea. There is also a lighthouse situated here which sits right on the cliff above the water and used to serve as an important tool for the seamen of past centuries.

Despite its remoteness, the cape can easily be reached by car as there is a narrow road leading all the way down here. The mentioned road also offers numerous scenic viewpoints that are worth a stop considering the beauty of the rugged coastline of this part of Lefkada.

Lefkada Town is the biggest settlement on the island. Not only that, but it is also one of the main transport hubs as the famous Floating Bridge of Lefkada is situated here connecting the island to the Greek mainland.

Considering Lefkada is home to only around 9,000 people the town offers a surprising number of excellent restaurants and bars as well as interesting attractions like the Archeological Museum and the Phonograph, Radio, and Traditional Museum.

The restaurants situated west of the Lefkada Bridge are a popular spot for fine dining as they offer great views over the water.

Sivota is 32 km south of Lefkada Town and is widely considered one of the most beautiful bays of the island. The nature here is marvelous, there are lush forests, romantic hills and of course the waters of the Ionian Sea.

Despite its natural beauty and the many fantastic beaches nearby, the village is very peaceful and quiet, and Sivota is just a very pleasant place to visit. There are many traditional taverns and bars found here, and many of them serve typical food from Greece.

The village of Vassiliki is all about fishing as most of ist 400 inhabitants are engaged in this way of life. Similar to many other villages on Lefkada, Vassiliki is located in a picturesque bay.

Apart from fishing boats, there are also plenty of tours with local boats that can bring you to beaches nearby or other islands like Ithaca and Kefalonia.

Needless to say, Vassiliki is great for fresh seafood and some of the island’s best seafood restaurants can be found here. The village is also home to many windsurfers as the windy weather of southern Lefkada is perfectly suited for the sport.

Milos Beach is another gem of nature and, similar to many other beaches on Lefkada’s western coast, very secluded due to the steep cliffs surrounding it.

You can only get here by boat or hiking through the forest from the village of Nikitas. The beach is known for its great sunsets and each evening many photographers come here to capture the dramatic scenes.

Especially recommended are the accommodation options situated right on the cliffs as they offer an incredible view over the Ionian Sea.

One of the cultural highlights of the island is the Archaeological Museum of Lefkada. It is located right in the cultural center of Lefkada Town and is dedicated to a large chronological period that stretches from the Paleolithic times to the Roman years.

There are many interesting exhibits found here that depict the life of the local population of Lefkada including the main commercial activities of fishing, farming, and weaving.

But there are also exhibits on the island’s deities and how they are presented in coins and figurines.

Try some wine from Lefkada

Lefkada is appealing to all senses and offers not just scenic beauty stimulating your eyes but also fantastic wine that is very different to the one produced on the Greek mainland.

The reason for that is the different grape varieties that are grown here and, perhaps more importantly, the Venetian influence on the Ionian islands.

Interestingly there are different wine zones established on Lefkada and depending on where you are either red, white or rose wine is grown. The best way to taste the local wines is by heading to one of the many family-owned wine estates.

Some of them are located in the beautiful hinterland like the Karsanikos Family Winery and are not just very welcoming to guests but also offer great natural beauty.

South of the village of Vasiliki is the popular Agiofilli Beach. This remote beach is surrounded by interesting rock formations and gets very busy during the summer.

Its popularity doesn’t come as a surprise considering the fantastic shallow waters that can be enjoyed here. Great for swimming but also perfect for just relaxing in the water and letting the sun spoil you.

Ithaki is an island south of Lefkada. Even though Ithaki is closer to Kefalonia than it is to Lefkada there are plenty of boat tours on offer that offer inexpensive day trips.

Ithaki is known for its beautiful nature and laid-back atmosphere. Especially the southern part of the island is very serene and peaceful and much less crowded than Lefkada.

Many of the boat trips from Lefkada include a full round-trip of the island and offer fantastic panoramas of the scenic beauty of the lovely bays and the hills in the backcountry.

Kavalikefta Beach is characterized by its rocky outcrops on the beach and in the water. Due to these rock formations, the beach feels a lot more intimate than some of the other beaches found on Lefkada.

Everyone can quite easily find a quiet spot away from the crowds. Similar to some of the other beaches on the island it is sheltered by cliffs and boasts very pleasant, shallow waters that almost feel like a bathtub during the summer months.

More reading from the Greek Islands

Want more recommendations on things to do in Lefkada, Greece? Leave a comment below!