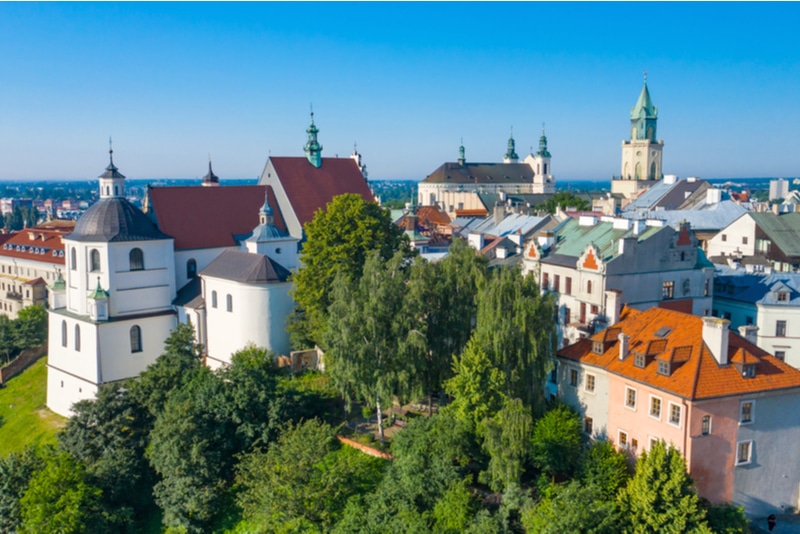 
Here’s a list of the 15 best things to do in Lublin in Poland, along with famous landmarks, museums, and other points of interest.

Lublin is one of the largest cities in Poland and serves as the capital of Lublin Voivodeship. The city is rich in history and was established before the 12th century, and was given full town rights in 1317.

It has been a thriving center of trade and commerce for centuries, thanks to its location between Vilnius and Krakow. Today, visitors can walk explore the old town of Lublin, which has been preserved despite the city being damaged during the second world war.

More recently, the city of Lublin has been listed as one of the best cities for business in Poland, and the city also attracts students from all over the country. It’s a beautiful Polish city that definitely deserves more attention.

In this article, I’m sharing some of the best places to visit in Lublin as well as interesting facts and attractions that shouldn’t be missed while visiting.

Chapel of the Holy Trinity

The Chapel of the Holy Trinity is one of the religious highlights of Lublin. It was built as a Gothic chapel with a Renaissance gable located in the courtyard of the castle of Lublin.

Many people are drawn here due to the chapel’s beautiful 15th-century frescoes of Byzantine and Orthodox style. The walls of the structure are painted with a fantastic level of detail and the Gothic Apse vault is a real highlight.

The Lublin Village Museum is one of the biggest open-air museums in Poland and is located on the western edge of the city adjacent to a beautiful garden.

The museum is dedicated to share the heritage of the region and promote the diverse traditions that shaped the past. There are several restored buildings found here such as a windmill and an old church.

Wandering the picturesque village with its many historic buildings is not just a great way to learn about the region’s history but also to unwind and relax.

The Majdanek State Museum is built on the grounds of the former Majdanek death camp operated by the Third Reich until its liberation in 1944. The museum is solely dedicated to keep the memory of the horrible crimes committed here alive and educate its visitors about this dark aspect of European history.

The most interesting part of the site is its many photographs, testimonials, and artifacts that tell the gruesome stories of its inhabitants. Some of the structures of the concentration camp are also intact such as a gas chamber that was used to kill large numbers of prisoners.

The castle of Lublin is one of the oldest Royal residencies in Poland and serves as a landmark and symbol of the Polish city. The castle is located on a hill overlooking the old town and many of its beautiful historic buildings.

The castle was built in a Gothic Revival style of architecture and is known for its monumental white castle walls and its towering red-brick keep situated inside them.

Just like the Majdanek State Museum, the Lublin Castle educates about the dark history of the Second World War as the castle was used as a prison and held over 40,000 inmates during the time of the German occupation.

The Trinity Tower is another landmark of Lublin and it was built in the 18th and 19th centuries. Today it stands at a height of 60 meters, overlooking large parts of the city.

The octagonal superstructure is built in a Neo-gothic style and houses the Archdiocesan Museum. Visitors who want to reach the viewing terrace of the tower need to climb 207 steps to do. The exercise is well worth it!

The Lublin Underground Trail is an almost 300 meters long tunnel beneath the Market Square. It was constructed by connecting several Old City cellars to form one large underground labyrinth.

This site has become a very popular tourist attraction in Lublin and the underground trail offers many great exhibits about the city’s past in a very unique setting.

The tunnels are home to many physical models of the city during the various centuries. Keep in mind that visiting Lublin’s Underground Trails is only possible on guided tours.

The famous church of St. John the Baptist and John the Evangelist, often also simply called Archcathedral, was built in the late 16th century and early 17th century and is today one of the most impressive buildings of the city.

The church with its two-tower design is impressive from the outside but what really draws visitors here is the beautiful interior. Particularly fascinating are the many beautiful paintings that decorate the Archcathedral depicting biblical scenes.

The grand furnishings and the illusionistic polychromes are also very much worth checking out and make a visit to this site a real highlight of any visit to Lublin.

The Grodzka Gate is considered one of the first stone-built elements of the city’s fortifications. It was built in 1342 and is also often called the Jewish gate because it used to connect the Old Town and the Jewish quarter.

The gate is also the home of the Chamber of Polish Printing Memory. There is an interesting exhibition of printing machines that were repaired to full functionality.

The Maria Curie-Skłodowska University Botanical Gardens were founded in 1946 and have since then been an oasis of greenery and a paradise for nature lovers.

The 21.25 hectares of space allow visitors to enjoy 6,500 species of plants here as well as a rosarium, a branch of water plants and an alpine garden.

Amongst the flora on display here are juniper, decorative bushes, cypress, fir, spruce,  azalea, and many other protected, rare or endangered species. The botanic garden also presents an interesting section that is dedicated to biblical plants mentioned in the old and new testaments.

The Dom Słów (in English: House of Words) is an institute dedicated to art and education and focuses on the meaning of the written word in a cultural and social context. The House of Words highlights the interesting role of ”free speech” and Poland’s recent transition from socialism to democracy.

The Dom Słów also aims at upholding the traditions of the original manufacturing process of books and holds many exhibitions throughout the year promoting reading and the love for books.

Center for the Meeting of Cultures

The Center for the Meeting of Cultures (CSK) is one of Lublin’s most interesting venues. It aims to be a hub of creativity, tolerance and culture and hosts many art activities and special events that promote its values.

The center seeks to open Polish society to the outside world and create a dialogue that promotes peace and understanding. In recent years the CSK also added a world-class opera and performance hall that attracts many famous artists.

The Pharmacy Museum is set in a building that is meant to resemble a traditional pharmacy of the 19th and 20th centuries. The insides of the museum are full of atmospheric furniture and authentic decorations.

The site offers visitors an interesting exhibition consisting of pharmacy equipment and tools used for the preparation of medicines. There is also an interesting pharmacy storeroom found here that holds many historic documents and prescriptions.

The Theater of Julius Osterwy is one of the best places to visit in Lublin for a cultural experience. The theater might not be as luxurious as the most famous European venues but makes up for it with fantastic performances that make full use of its modern stage-technology and great acoustics.

The easiest way to book a ticket is by visiting one of the many ticket vendors in Lublin. Fans of great operas, musicals or theater performances should not hesitate and use their chance to experience the excellent Polish performing arts.

The Fontanna Multimedialna Lublin is the perfect place to spend a warm summer evening. The fountain is one of the most impressive in the country and offers fantastic displays in which lights, music and lasers are combined to create dramatic events.

Due to its central location it is easy to combine a fountain show with a relaxed evening in one of the many excellent restaurants or bars in the surroundings. This is also a great attraction for kids as they will love the vibrant colors and movements of the water.

Lublin’s Old Town is one of the most beautiful and atmospheric neighborhoods of the entire country and is considered a national historic monument.

The highlights of the neighborhood are without a doubt the Krakow Gate and the Crown Tribunal, but this is one of these areas where just taking a walk and taking in the atmosphere is the real highlight.

Apart from the main tourist hotspots most of the little streets and alleys are very peaceful and authentic and offer a great chance to deep-dive into Polish history.

Want more recommendations on things to do in Lublin, Poland? Leave a comment below!