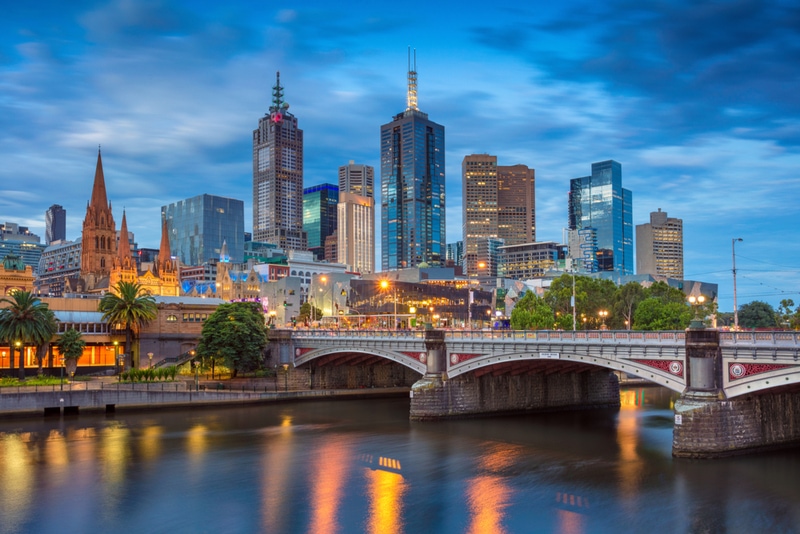 
Here’s a list of the 15 best things to do in Melbourne (Australia), along with famous landmarks, museums, and other points of interest.

Melbourne is one of the largest cities in Australia with a population of nearly 5 million residents. The city is located in the southeastern Australian state of Victoria, where it also serves as the state capital.

In this article, I’m sharing some of the best places to visit in Melbourne as well as attractions that shouldn’t be missed while visiting.

Melbourne’s Royal Botanic Gardens were founded in 1846 and are without a doubt one of the most impressive of its kind in the entire Southern Hemisphere.

The gardens not only offer incredible native as well as foreign plant species but also interesting monuments such as the Shrine of Remembrance, the La Trobe’s Cottage, and the Government House.

The park’s location on the banks of the Yarra River adds to its scenic beauty and there really is no reason not to come here when visiting Melbourne.

Eureka Tower with its amazing Skydeck is a must-visit when coming to Melbourne, and stands as one of the city’s most iconic buildings.

Not only does the Skydeck offer a breathtaking 360° view of the city and its surroundings but it also features adrenaline-inducing glass floors that make coming here an unforgettable experience.

The Eureka Tower has a height of 297 m which makes it the third tallest building in Australia. It also features the fastest elevator in the Southern Hemisphere.

If you want to escape the busy city streets of Melbourne a trip to Dandenong Ranges National Park is just right for you.

This lovely area is not just great for hiking through marvelous nature but is also of cultural significance as it served as a key living area of the Indigenous Australians.

The Dandenong Ranges are known for their thick forests and large populations of wallabies and lyrebirds. There are many viewpoints found here that offer a great view over nearby Melbourne.

The Melbourne Cricket Ground (often abbreviated MCG) has an amazing capacity of 100,000 and offers the perfect chance to experience some of Australia’s interesting sports culture.

As the name suggests, cricket is the main sport being played here and indeed many important cricket matches of international significance are played here each year.

You can also attend a game of Australian Football here or watch rugby. The Melbourne Cricket Ground is also of significant cultural value and is registered on the Australian National Heritage List.

One of the commercial centers of Melbourne is the Queen Victoria Market. The market has an impressive size of 17 acres which makes it the largest open-air market in all of the Southern Hemisphere.

Not only is it a major center of trade, but it also has a long history dating to the 19th century. The market is separated into a food section offering fresh produce from Melbourne and its surroundings, as well as a non-food section that is particularly interesting for the roughly 10 million visitors that come here annually.

There is clothing, jewelry, artworks as well as handicrafts on sale here. Keep in mind that the market is not open on Mondays and Wednesdays so plan your visit accordingly.

Melbourne’s City Circle Tram is a very comfortable option to travel around the city. Not only that, but it is also completely free which makes it ideally suited for people who just arrived and want to get a feeling for the city.

The City Circle Tram is very historic and offers plenty of nostalgia. A full round in the circle tram takes 50 minutes and many of the city’s most interesting places and sights are connected by the route.

Shrine of Remembrance is a very impressive structure dedicated to the victims of war and peacekeeping. The shrine is located within the Royal Botanic Gardens and is surrounded by beautiful greenery.

The structure is characterized by its monumental colonnaded porticos. Interestingly, the monument was designed by veterans of the First World War. The shrine’s architecture is sometimes compared to the Tomb of Mausolos in Athens due to its classical style.

National Gallery of Victory was founded in 1861 which makes it the oldest in Australia while at the same time also being the country’s largest and most-visited.

The collection found here is very diverse and extensive and features not only Australian art but also art from all over the world. Especially the Asian art collections are very interesting as they date all the way to 1862.

Apart from the many beautiful paintings found here, there are also interesting photography collections which are equally fascinating.

Melbourne offers one of the most lively street art scenes in the world and there is no better way to get a glimpse of this fascinating scene than to join the Melbourne Street Art Tour, a truly incredible experience that teaches a lot about the principles of how street art is made.

Not only will you be amazed by the fantastic works found here you will also meet the people behind it as the tour is led by real street artists. Many of the interesting techniques used for creating street art are presented and explained to the participants.

Visit the State Library of Victoria

The State Library Victoria is the country’s largest public library and was founded in 1854. This library is home to an unbelievable number of two million books and 350,000 photographs, newspapers, maps, and manuscripts.

The building’s facade with its monumental columns makes it one of the most impressive examples of colonial architecture in all of Melbourne. If you want to dig deep into the library and its history there are guided tours available.

One of the most significant aspects of Melbourne’s history is immigration and the best place to learn about it is the Immigration Museum.

Not only is the museum full of interesting collections but it is also housed in an interesting historic building, constructed in 1835, which used to house the Fawkner’s Hotel.

Many interesting stories of immigrants are displayed here. There is also a so-called Immigration Discovery Center found here that allows Australians to search for their roots.

Fitzroy Gardens are an incredibly beautiful green space right in the heart of Melbourne. What makes the gardens so interesting are the many lovely Tudor villages, a beautiful fountain, and a lovely cottage.

There are many tall trees found here that offer plenty of shade when walking along the lovely footpaths. Needless to say, there are also many great playgrounds here. The St. Patrick’s Cathedral is also a very impressive building found right next to the Fitzroy Gardens.

Flinders Street railway station is another great example of the city’s colonial heritage and can be found right in Melbourne’s central business district. The station was opened in 1854 and still functions as an operational railway station.

The station is built in an impressive Edwardian style and features a prominent dome. Right across the station is the impressive Federation Square that is one of the main meeting points of the city for residents and visitors alike.

The Old Melbourne Gaol was built in the middle of the 19th century and has long served as a symbol of authority and law enforcement. The prison served as an institution for, particularly dangerous criminals.

Even though the prison has long closed the Old Melbourne Gaol remains an important building and has recently been opened up for visitors. There are night tours available as well as chilly ghost tours.

Saint Kilda is a lovely neighborhood south of Melbourne which is a very pleasant area for relaxed beach walks and the local Kilda Beach which offers great watersports, swimming and a great boardwalk that offers a 360° panorama of the city and the Port Phillip Bay.

Another popular activity here is penguin spotting during the night. Just come to the breakwater at the end of St Kilda pier and join the crowds of penguin spotters.

Want more recommendations on things to do in Melbourne, Australia? Leave a comment below!