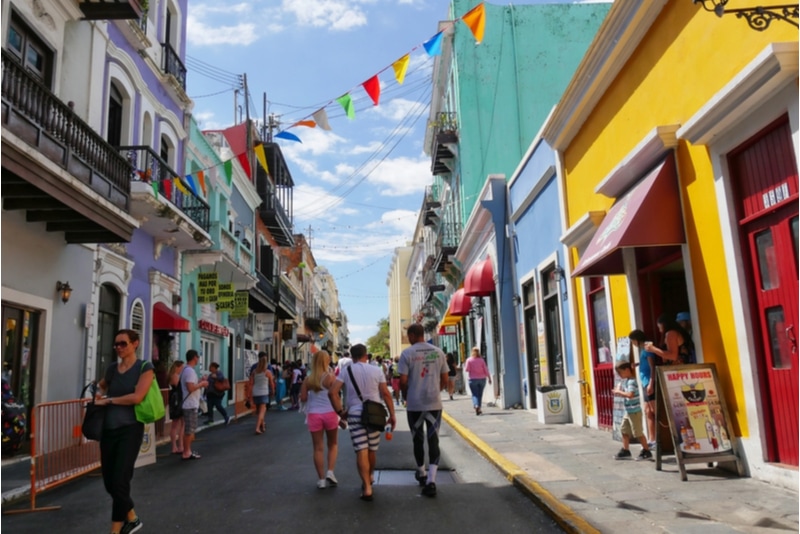 
Here’s a list of the 15 best things to do in San Juan, Puerto Rico along with famous landmarks, museums, and other points of interest.

Viejo San Juan is the historic district of San Juan, Puerto Rico. The oldest settlement in Puerto Rico, it is a UNESCO World Heritage Site thanks to its incredible collection of landmarks and historic architecture.

The streets are narrow blue cobblestone, and the brick and stone buildings date back to the 1500s. The best plan is to get lost on its streets, stroll the Paseo de la Princesa, visit the castle, and see the colorful architecture, painted doors, and old colonial buildings.

San Juan is a total cosmopolis, but something happens when you approach the sea. Palm trees pop up and high rises give way to golden sand. Isla Verde is a tropical beach right next to the airport and it is quite popular.

Surfers tend to stick to the section known as Pine Grove, while the Balneario de Carolina is an area with all the facilities (parking, lifeguards, etc). The Alambique is the most relaxed, chill section of Isla Verde.

Fortaleza Street is one of the most famous streets in San Juan. The cobblestoned stretch is bookmarked by colonial architecture and filled with shops, selling everything you can imagine.

The real spirit of the city can be seen on Calle Fortaleza, and the street’s name comes from the fortress building, also known as the Palace of Santa Catalina, which lies at the end of the road.

It is also an Instagram favorite, as a portion of it is covered by colorful umbrellas, creating a magical overhead covering that is as beautiful as it is photogenic.

The Castillo San Felipe del Morro sits on an outcropping of the city, surrounded by sea and greenery. Built as an important military fortification by the Spaniards, it was subsequently used by the United States as a point of military defense.

Such a grand building was indeed necessary since Puerto Rico was a strategic Caribbean port both regarding trade and military defense.

It was built from 1539 to 1790, starting out like a promontory with a cannon and ending up as the six-level fortress it is today. The old fortress is now a UNESCO World Heritage Site and a museum.

The Metropolitan Cathedral Basilica of Saint John the Baptist is one of San Juan’s oldest buildings. Originally built in 1521, the church is the oldest cathedral in the United States and a symbol of the early days of Christianity in America.

The diocese, founded in 1511, is the first-ever created in the New World. The original building, built of wood, was destroyed in a hurricane—the current building was built in 1540.

The cathedral is also famous for containing the tomb of Juan Ponce de León. The interior holds a shrine dedicated to Carlos Manuel Rodriguez Santiago, the first Caribbean-born person to be beautified.

The Museo de Arte de Puerto Rico, known as MAPR, is one of the most important art museums in the Caribbean. MAPR and its impressive collection is housed in the former city hospital, a beautiful neoclassical building in the city center of San Juan.

Founded in the year 2000, the paintings, carvings, sculptures, and more date from the 17th century to the present. The museum and its 18 exhibition halls hold important works by the top Puerto Rican artists, including Nick Quijano, José Campeche, Francisco Oller, and Nayda Collazo-Llorens.

Condado Beach is the trendiest beach in all of Puerto Rico. It has everything—a beautiful stretch of white sand, warm weather all year, and cultural experiences and restaurants all around.

A mini Miami Beach, you can spot everyone from tourist families to famous celebrities. The name comes from the district in which it is located, which houses plenty of hotels just a short walk from the beach.

The waters of Condado Beach have quite strong currents, so families should beware and swim with caution, and never leave kids out of sight.

The Capitol of Puerto Rico

The capitol building of Puerto Rico was constructed between 1925 and 1929, a Neoclassic Revival building similar to many other government buildings in the United States.

The signature dome, however, was not finished until 1961. A compilation of various designs but carried to its completion by local architect Rafael Carmoega, the interior features several scenes that show the history of Puerto Rico.

This is where the island’s legislature meets in, and visitors can tour the building with an appointment.

Museum of the Americas, located in the Cuartel de Ballajá military barracks, was inaugurated in 1992 as a place to exhibit and explore the culture of Puerto Rico.

The collections are divided between a permanent one, including exhibitions on Folk Arts, African Heritage, and Conquest and Colonization, and temporary exhibits.

The items on display include pre-Columbian art and artifacts from the 22 ethnic Indians that survived the conquest. There is also a fun factory for children, making this a great stop for the entire family.

The beach El Escambrón is paradise. Picture a gorgeous golden-sanded beach surrounded by a coral reef and waving palm trees. It is one of the most popular beaches in Puerto Rico, and it is located within walking distance from Old San Juan.

Balneario El Escambron is popular not only for its beauty but also for the plethora of activities there, ranging from snorkeling to parks to scuba diving. The beach has views of the historic buildings of San Juan, including the Capitol.

The cemetery is one of San Juan’s biggest attractions, thanks in part to its location perched over the sea and in part to the beautiful burial sites.  Some of them are famous people from Puerto Rico’s history, others are lost to history. Built in 1863, it holds about 1,000 graves.

Established in 1862, the world-famous rum brand Bacardi has its principal distillery in San Juan. Created by Don Facundo Bacardí Massó, who spent years perfecting the production of rum.

The main distillery is known as “the cathedral of rum”, in part for its grandiose appearance and also because of the sheer amount produced (100,000 liters every day).

Take a tour of the facilities, and learn about the proprietary yeasts and recipes, the distillation process, and taste some of the rum.

The Poet’s Passage is a famed shop, gallery and cafe in the center of Old San Juan. Owned by a poet and painter duo, it is one of the most eclectic shops in town.

Spend an evening there during one of the common poetry recitals and rub elbows with local creatives. Or spend the day browsing the shelves of handmade items and art prints.

The Chapel of the Holy Christ, also known as the Holy Christ of Health, was built in the second half of the 18th century. The motive for the building was a miracle that supposedly happened on the site in 1750.

The Baroque chapel is today an icon of Puerto Rico, and visitors and locals alike flock to see the façade and pray at the holy site, which graces the covers of many travel guides about San Juan and Puerto Rico.

The San Cristobal fortress is the largest European fortress in the Americas. It took 150 years to build, begun in 1634 and finished in 1790, with the aim of Spain to prevent attacks from other nations.

It sits on 27 acres and features two entrances. The main access is through the entry at the bottom east part of Norzagaray, and hundreds of visitors come daily to walk through the main plaza, the fortifications, the battery, and the observation area.

Unfortunately, a third of the fortification was demolished to allow the city to grow, but nonetheless what remains is quite impressive.

Want more recommendations on things to do in San Juan, Puerto Rico? Leave a comment below!