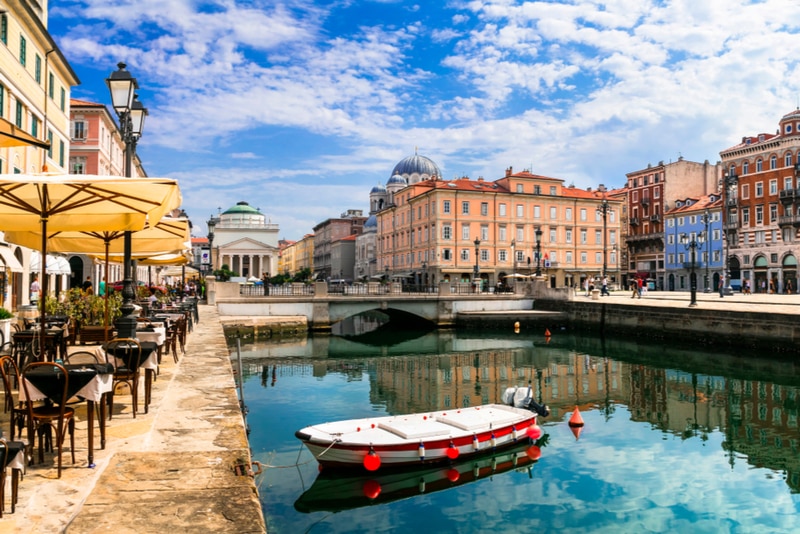 
Here’s a list of the 15 best things to do in Trieste (Italy), along with famous landmarks, museums, and other points of interest.

The Roman Theater of Trieste is one of the historical monuments of the city and is incredibly beautiful due to the many ornamental statues and plaques found here.

Today the theater is a symbol of the wealth of the Roman Empire and serves as a venue for the Teatro Romano Festival that takes place every July.

The Castle of Saint Giusto sits on a hill overlooking the city and shores of the Adriatic Sea and is undoubtedly one of the highlights of Trieste.

This fortification was built by the Austrian Empire between the 14th and 17th centuries and was meant to protect the city and its resident military administration.

Today the castle is home to the interesting Museum of History and Art. The museum is particularly great to learn about the years of Austrian rule and the military battles that took place in Trieste and its surroundings.

Miramare Castle was built in the 19th century as a residence for the Austrian Archduke Ferdinand Maximilian. It was designed by the famous architect Carl Junker.

What makes this site particularly interesting is its 22 hectares of surrounding greenery and its cliffs along the shoreline. The parks surrounding the castle feature a lot of tropical species that are worth exploring.

The castle offers visitors a great museum that is dedicated to the history of the castle and the region. The interior of the castle is very well conserved and perfectly resemble its original beauty.

The Cathedral of Saint Giusto was consecrated in the 14th century and has since then served as the seat of the Bishop of Trieste. Even though the structure is rather plain it attracts a large number of visitors due to its interesting mausoleums and artworks on display.

Many of the Carlists, a group of claimants of the Spanish throne, have been buried here. The most interesting artworks found here are mosaics depicting Our Lady of the Assumption and Christ between Saints Justus and Servolus.

There have also been many interesting archaeological excavations works carried out here in the 20th century. The artifacts found are displayed here as well.

The Grotta Gigante is a giant cave found north of Trieste, a few kilometers inland from the shores of the Adriatic Sea.

The cave was featured in the Guinness Book of Records from 1995 to 2010 for being the largest show cave in the world, measuring 107 m in height and 130 m in length.

The cave is a very interesting site for nature lovers offering many beautiful stalactite and stalagmite formations. Joining one of the guided tours of this cave is a great experience especially during summer when the cave is pleasantly cool.

Val Rosandra is located just east of Trieste and is a great stretch of nature ideally suited for day trips from Trieste. The large ravine features many hiking trails, mountain biking paths, and great climbing gardens, waterfalls, and grottoes.

The Val Rosandra is particularly known for its fantastic rock formations and its goat populations that can be encountered when hiking or cycling along the ravine’s trails.

Make a day trip to Piran

Piran is a scenic seaside town in Slovenia and can be visited on day trips from Trieste. Many travel agencies offer bus or boat tours to Piran making it very easy to reach this beautiful Adriatic town.

Piran offers a fantastically conserved old town and harbor situated right on the shores of the sea. It’s a truly stunning example of the world-famous architecture of Slovenia and Croatia and offers an array of museums, castles, churches and picturesque squares.

Risiera di San Sabba is a sad reminder of the gruesome past of Northern Italy as it was used as a concentration camp run by the SS during the late stages of the Second World War.

It was here that many Jewish residents of the area were held before being transported to Auschwitz. Today this reminder of the horrors of the 20th century serves as a museum.

Visiting this place is not just interesting for history buffs but worth a visit for everyone as this chapter of European history is something everyone should be familiar with.

The Gulf of Trieste is one of the most beautiful areas of the Adriatic Coast and consists of the waters of Trieste and its surroundings. The bay is known for its shallow, calm waters that are perfectly suitable for bathing as well as sailing and all kinds of water sports.

Visitors of Trieste will find the Golfo di Trieste particularly interesting because of its many beaches that invite for lazy hours relaxing in the sun.

The Carso Triestino is a Carst plateau located just south of Trieste stretching across the border to Slovenia. It features beautiful rock formations, often virtually untouched nature and many historic villages that feel like a relic of the early 20th century.

The region is perfect for exploring on foot and going on extended hikes through its many hills and woods.  One of the region’s highlights is its beautiful coastline featuring many spectacular cliffs overlooking the Adriatic Sea.

The Chiesa Serbo Ortodossa di San Spiridione is a great example of the typical Serbian orthodox churches found all over Eastern Europe. It was built in the 18th century and holds many interesting historical documents, icons, and artworks.

The dome of the church is undoubtedly its biggest attraction as it is breathtakingly beautiful from the inside. It features fantastic paintings which are lit up by a row of windows found in the dome, giving it a unique appearance that will certainly create lasting memories.

The underground complex ”Kleines Berlin” consists of air raid shelters of the Second World War and can be visited on guided tours.

This structure was built both by Italian as well as German workers and features many mysterious tunnels, big rooms housing the SS troops, and many original artifacts of the time of its use.

Trieste features a great historical neighborhood called the Citta Vecchia. This area is perfect for everyone who likes the traditional narrow and winding streets of Mediterranean cities.

What makes Trieste’s Old City so unique is that it also features a Swabian castle that is a great example of its location between the German-speaking countries and Italy’s mainland.

Needless to say, there are many churches and monuments found here that wait to be explored. The Citta Vecchia is also Trieste’s best area for dining and nightlife as there are many excellent restaurants, bars and nightclubs located here.

The Museo Civico di Storia Naturale di Trieste is one of the city’s best museums. Amongst its highlights is the so-called ”Antonio the Dinosaur”, one of Europe’s most important paleontological discoveries.

There is also a 6400 years old human jaw found here that features a dental filling of beeswax, an unbelievable example of some of humanity’s earliest dental treatments. The museum also features the world’s largest white shark measuring 5.4 m.

Teatro Lirico Giuseppe Verdi is the city’s most prestigious opera house and was constructed in the first years of the 19th century by an Austrian architect.

The house has premiered many famous operas and is known for its elegant interior and state of the art facilities. The Teatro Verdi is perfect for couples or even families eager to spend an elegant evening in Trieste.

Want more recommendations on things to do in Trieste, Italy? Leave a comment below!