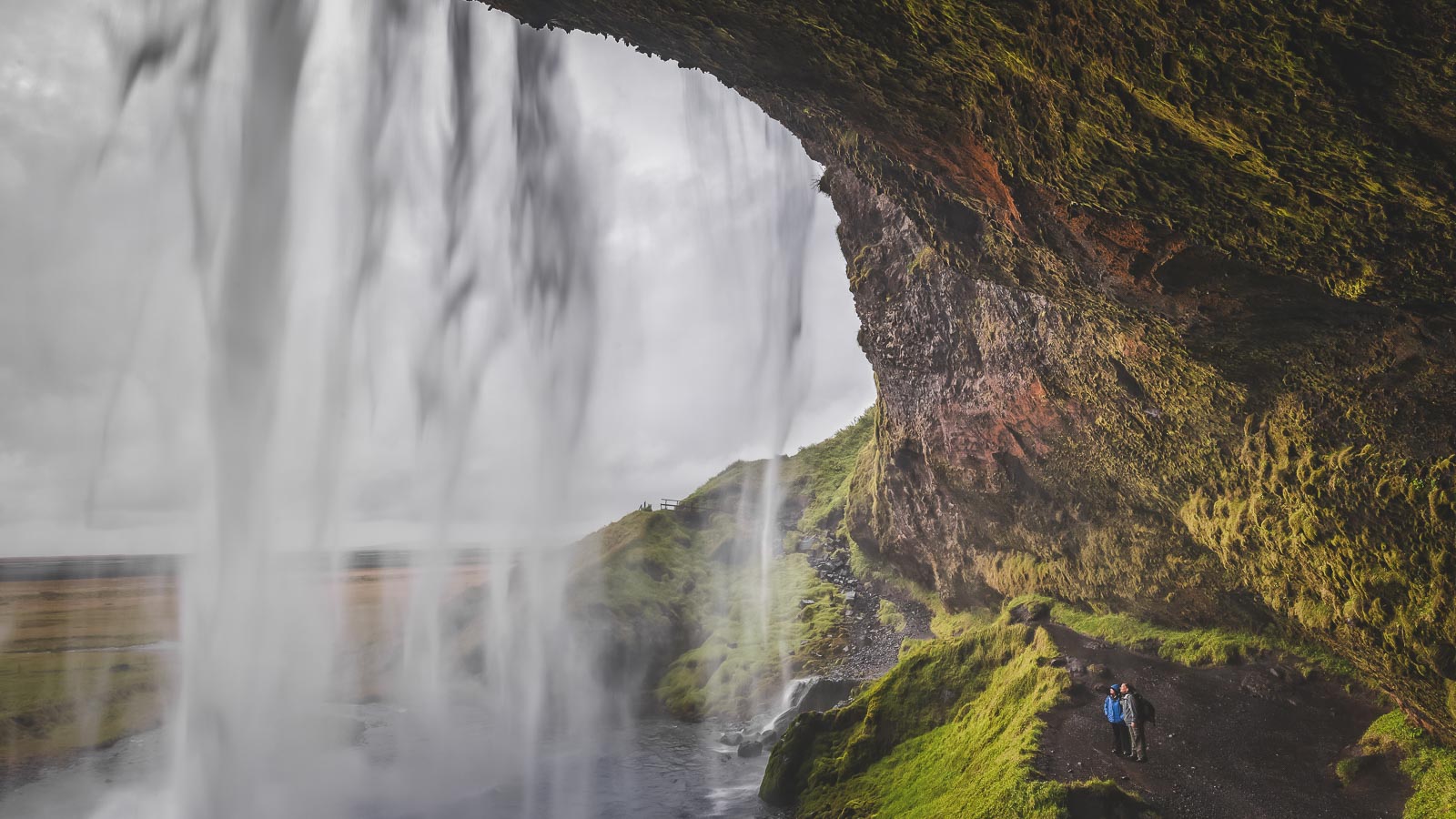 
Iceland has been the darling of adventure travel for nearly a decade with tourists flocking to its borders to see its mighty waterfalls, glaciers and fjords. Although not quite as popular as it once was, Iceland is still one of the top 50 most popular destinations for American tourists. We’re certain that when you learn more about this gorgeous cold-weather country, it’ll make your list of must-see places!

There are a lot of facts about Iceland to learn and even more to love. Whether you love folklore, the study of language, or breath-taking scenery, Iceland has something for you.

If making travel arrangements in another country stresses you out, don’t worry. We’ve already put together an extensive Iceland travel guide to help you find vacation rentals, plan your route, and put together a vacation itinerary. In the meantime, let’s get started with 15 cool facts about Iceland that will inspire your next vacation!

1. Iceland Was Settled By Vikings

For a European country, Iceland is considered relatively young. It wasn’t until the 800s that Vikings from Norway came to settle what we now know as Iceland. Viking culture is still reflected in the language, the art, and even the land, itself. Fun Fact, The Series Vikings touches on this fact in the final season. You should watch it it’s great!

2. The Name Iceland Is Meant to Confuse

What was one of the first things the Vikings did when they got to their new land? They gave it a name–and one that was meant to throw off potential invaders.

You may have wondered before why Iceland and Greenland have the names that they do when Iceland is covered in foliage and Greenland is covered in ice. Believe it or not, this was done on purpose! The Vikings knew they would be followed by enemies, and hoped that creating this confusion would send their enemies over to Greenland and leave them in peace.

The Althing is Iceland’s national parliament and it is one of the longest-running parliaments in the world. In fact, the original site of the Althing marks the first parliament grounds in European history.

The Icelandic parliament has undergone changes over the years, particularly after Iceland became unified with Norway. However, it is still functional today, and tourists can see the place where one of the earliest democracies took shape.

Þingvellir National Park is home to the Althing, but it also bears some serious geographical significance. It is one of only two places on the planet where you can physically see the split between two of the tectonic plates. To be more specific, at this location you can take a look at the North American and Eurasian plates where they meet in the Atlantic Ocean. Read more: Diving in Silfra – Iceland Underwater

(Where is the other spot where you can see this phenomenon? You’ll find it on your next trip to Africa.)

5. Iceland Has Tons of Volcanoes

We don’t tend to associate cold-weather countries with volcanoes, but Iceland is chock-full of them. In fact, Iceland has over 125 volcanoes spread around the country.

Some of these volcanoes are still active while others could awaken at any time. Much of Iceland is covered in lava fields and the nation experiences at least one new eruption about every four years.  Read more: Iceland – Experience the Land of Fire and Ice

Volcanic activity doesn’t just happen above ground, where we can see it. There’s all sorts of volcanic activity occurring underground in Iceland, which becomes geothermal activity. As a result, Iceland has its fair share of hot springs that people enjoy swimming in all year round.

Be aware that some of the most famous hot springs (ie the Blue Lagoon) are actually manmade–although the water is naturally heated. If you want to splash around in a natural hot spring, you’ll need to venture out into the countryside. Check out: How to Visit The Blue Lagoon in Iceland – Is it Worth It?

7. Iceland Is One of the Most Eco-Friendly Countries In the World

Iceland is one of the most environmentally-friendly countries in the world. In a way, they achieve this low carbon footprint by default.

Iceland relies on an extraordinarily small amount of fossil feuls to power their infrastructure. Hydropower and geothermal energy is harnassed from the volcanic activity and hot springs to power an estimated 85% of the nation. Read next: Mighty Iceland Waterfalls You Have to SEe to Believe

No matter where you go in Iceland, you’re bound to notice how unique the topography is. In large part, Iceland has been shaped by frequent earthquakes and volcanic activity. The third element contributing to the gorgeous landscape is glacial activity!

9. Iceland Is Scarce on Trees

As you can imagine, a landscape that was shaped by volcanoes and glaciers can be a harsh environment for natural growth. As you travel through Iceland, you’ll notice that you don’t come across any forests. There are certainly trees in Iceland and the nation has increased reforestation efforts in recent decades, but there are no old growth forests to be found.

(Bonus fact! Harsh conditions aren’t the only thing that contributed to Iceland’s lack of forests. When the Vikings settled the land, it appears that they may have gotten a little heavy-handed with their logging.)

In most countries, spending time out in nature means getting bit by mosquitos. In Iceland, you don’t have to worry about those particular pests, because they simply don’t have any.

Scientists believe that this lack of mosquitos is caused by Iceland’s peculiar weather patterns. Throughout the year, Iceland experiences three cycles of freezing and thawing, making the temperatures unsuitable for mosquito life.

The bad news? Iceland does have sand flies, so you’ll still need to pack your bug spray.

11. The Icelandic Language Has Barely Changed

The Icelandic language can be most closely compared to the Norwegian and Danish languages. However, it remains a unique and well-preserved language overall.

Most languages change over time. For example, the English used by Shakespeare’s contemporaries looks and sounds different from the English we use today. The Icelandic language, on the other hand, still looks and sounds almost identical to what was spoken centuries ago.

12. Legends Abound and Blend With History

If you love legends and folklore, you’re going to have a blast in Iceland. Trolls and elves are abundant in Icelandic folklore and the stories you’ll hear are nothing if not delightful. For example, you may hear that large rock formations are frozen trolls or that some land is left undeveloped because it is home to elves.

There is some confusion about how many Icelandic people truly believe in elves and trolls. One survey found that many people in Iceland will neither confirm or deny their existence because there’s no proof either way–and we agree!

13. Iceland Is Great for Adventurous Eaters

Iceland is one of the rare countries where you won’t find a McDonald’s. Instead, you’ll want to try out some of their exciting and unusual fare!

Some things you might find on the menu at an Icelandic restaurant include puffin, fermented shark, whale, sheep’s head, and dried fish. Don’t worry, non-meat eaters! Iceland is also a great place for vegan and vegetarian dining!

If you’re familiar with American history, then you know all about Prohibition (the years when alcohol was banned in America). In Iceland, something similar happened–and it continued for a long time.

Now, you’ll find plenty of microbreweries in Iceland! Plus, to celebrate the legalization of beer, Iceland celebrates National Beer Day on March 1st every year.

15. Book Lovers Will Feel at Home in Iceland

Iceland is home to a large number of published writers, in part because the written word is well-honored by almost all Icelandic people! In fact, one of Iceland’s unique holiday traditions falls on Christmas Eve, when family members exchange books with one another and spend the day reading.

If you’re an avid reader, you will want to make a few stops at some of Iceland’s beautiful bookstores. We also recommend timing your vacation right so that you can head to the annual Reykjavik International Literary Festival. Then, head to the turtle-shaped National Library of Iceland to round off your book-themed travels!

Go Beyond Facts About Iceland and See the Sights Firsthand

We hope that these interesting facts about Iceland have left you intrigued and wanting more! Iceland is a beautiful country that simply can’t be compared to anywhere else on earth. Why not see the sights of Iceland firsthand by making it your next big destination?

Here at the Planet D, our goal is to make travel easier and more enjoyable for everyone. We provide travel guides, useful tips, and interesting information to help you plan your vacations.

Not sure where your next destination should be? Type in any location in our destination finder and get started learning about it today.