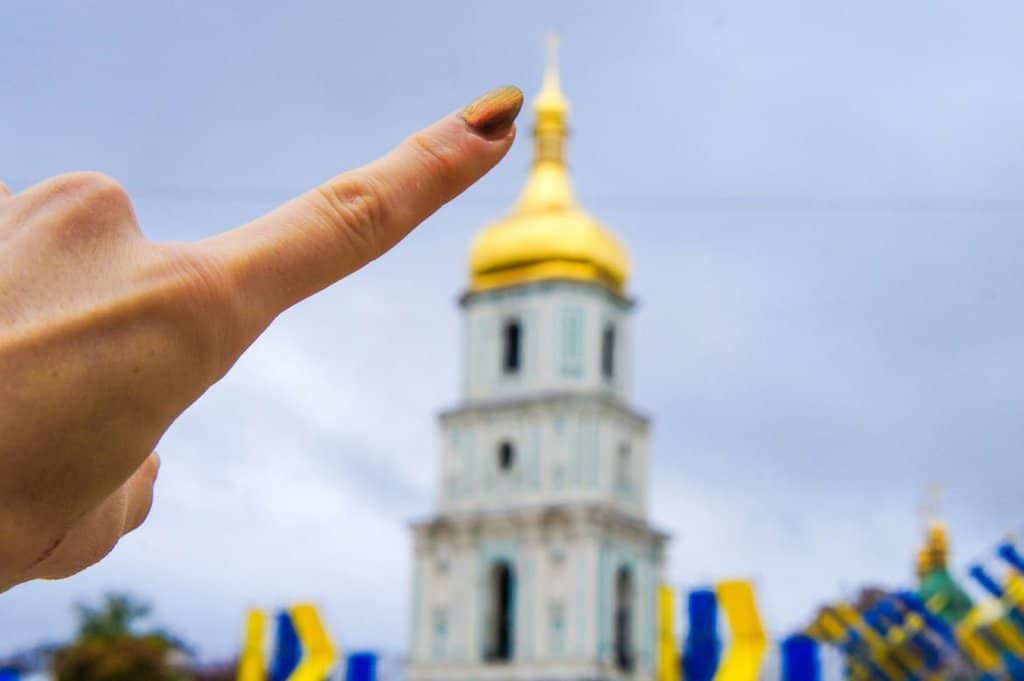 You can now download this article as an app and get an offline map so you can go and see these places yourself.

As the Capital of Ukraine, Kiev is an incredible city with so much history, architecture, and things to experience, that it seems impossible to do it all in one day; even if you just want to see Kiev’s best attractions. In fact, it seems so impossible that instead of just putting together a 1-day guide like we often do, we thought that it would be better to put together something which takes place over not 2, but 3 days.

So, here are the best things to see and do in Kiev over the course of 3 days. Experience the best and the finest Kiev has to offer.

Spend your first day seeing some of the city’s most beautiful and magnificent offerings. From the central seat of government adjacent to Mariyinsky Palace to an ancient city gate dating back to almost 1000 years ago, your first day in Kiev will be spent exploring what Kiev truly has to offer.

The Ceremonial home of the Ukrainian President, this popular destination is perfect for those who want to start their tour of the city on foot. The Baroque style architecture is over 140 years old and shines against the backdrop of the city.

Part of the reason why the palace might be so impressive is that it was designed by the same person behind the Winter Palace in St. Petersburg. The Palace is open to the public to view and have a look through, so if you feel like catching more of it in the morning, then feel free to have a look around.

Just next door, you’ll find the Mariyinsky Park, a beautiful outside area to spend a bit of time relaxing and admiring the area’s beauty. This park is around 130 years old and is also home to a Soviet necropolis, making it a true area of interest for those interested in the city’s history.

The main street for tourists and locals alike. The street is filled with a huge arrange of shops, restaurants, and even public entertainers. If you head here on the weekend, you’ll sometimes find that it has been closed to traffic and instead is filled with more performers than usual, putting on shows for the public.

You’ll also find Independence Square located along this street. Probably the most popular meeting place for people in Kiev, you’ll be able to watch everyday life in Kiev pass right in front of you as you look at it in wonder and amazement.

If you’re interested in a truly expansive experience in Kiev, then visit St. Michael’s Golden-Domed Monastery. The impressive structure is, as the name implies, golden-topped and still a fully functioning monastery. It is easily one of the best religious sites in Kiev which you’ll be able to find in the city. If there was one thing on this list which you should visit, this is it.

Unfortunately, the structure which stands today is not the same as the one which existed previously. The original (built in 1108) was torn down in 1937. The version you’ll see today was constructed only back in 2001. However, the rebuilding project painstakingly made sure to build the original brick by brick, as much as possible.

Heading behind the monastery, you can actually take a funicular down the side of the mountain and towards Poshtova Ploscha below. Here you’ll be able to explore the winding streets and stores.

Another of Kiev’s best attractions and a UNESCO World Heritage Site. The frescoes and mosaics here date back as far as the 11th century and are a marvel to look at. Just a short walk from St. Michael’s, you’ll want to make sure that it’s not your itinerary. We won’t ruin it for you, except to say that it’s UAH60 (US $2.40) for admission.

Having been destroyed in the 19th century by heavy fires, the area has now been heavily rebuilt and turned into a trendy merchant’s district. The area has many different restaurants which are both delicious and upmarket.

Make sure to visit the Monument to Scovoroda, which is located in roughly the center of the district. The statue is dedicated to the great Ukrainian philosopher and figure Grigoriy Skovoroda. Surrounding the statue is Kontraktova Square, which just happens to be the perfect place to stop and relax for a while before heading on to your final destination.

The Golden Gate of Lyov

Located within the picturesque, but small, Golden Gates Park, the Golden Gate of Lyov was once the main gate to the modern-day city of Kiev; many, many, many, centuries ago. Back in 1307, in order to protect the residents of the city, the structure was constructed.  The one which stands today is not the original, and was, just like St. Michael’s Golden-domed Monastery, reconstructed based heavily on the original.

Your second day in Kiev will be about looking back in time, to a point in Ukrainian history which was fraught with turmoil. With several of the city’s best and most inspiring sites located within just a short distance from one another, you’ll be able to spend your second day gripped by the stories and tales you hear, and what you witness in the sites you visit.

Known as the Kiev Monastery of the Caves, this UNESCO attraction is the perfect place to start your second day in Kiev. The caves were originally dug out by priests who lived in the monastery as hermits and have since become accessible to the public.

There are two primary parts to the Kyiv Pechersk Lavra; one of Kiev’s best attractions. The first is the overground area, including several structures and the Lavra Bell Tower. You’ll also find several free museums open to the public up here, which have a lot of local history and culture inside. They close at 6 pm.

The second part is underground and is actually owned by the church (as opposed to by the state). You can explore the cave structures for hours. This being the Lavra Caves with ancient saintly relics which lie inside. For walking through these cave structures, you should make sure to allow for around 2 hours, depending on the speed at which you walk. Entry is 40UAH (US $1.50).

Standing 63 meters tall, the Motherland Statue in Kiev is one of the most incredible statues the city has to offer. Made of solid stainless steel, the motherland statue is located within close vicinity of many of the war memorials Kiev has to offer, and the Museum of the National Museum of the History of Ukraine in the Second World War dedicated to the soldiers of the 2nd world war.

From the Motherland Statue, the next place you’ll want to visit is this museum. As one of Kiev’s best attractions, the museum is host to a range of exhibitions which honor those who had served and were lost in the second world war.

The museum is one of the largest in Ukraine and highlights the Motherland Statue. There are over 300 exhibits here, which have been seen by over 21 million guests.

Previously, the museum was known as the Museum of the Great Patriotic War, however, in 2015 that name was changed to what it is known as now.

Finish your day at one of the more somber sites in Kiev. The Babyn Yar was the sight of countless massacres of Jewish people and others by the Nazis. It is believed that a total of 60,000 people were executed at this site. The park is now a memorial to those who were killed and

From the Founders of Kiev Monument, hop on the metro and take it to the Dorohozhychi metro station. When you exit, keep your eyes out for a large statue dominating the skyline. You will want to go to the opposite side of this. Make sure to keep to the paths and show respect here.

Your final day in Kiev is going to have less to do, but those things aren’t necessarily going to be the same as those which came before. Day 3 is alternative Kiev.

For something a little different, check out the Chernobyl Museum. Exhibitions here link to the power plant which suffered a nuclear disaster in 1986 Chernobyl. The museum’s contents aim to educate the public about the dangers of nuclear power. An interesting experience for sure.

To finish off your trip, make sure to head to Hidropark Island, where you can spend the rest of your day relaxing on the beautiful city beaches it has to offer. You can swim in the river, join in on a game of volleyball with the locals, or sit down and enjoy a good book.

Where to Stay in Kiev

The best places to stay in Kiev are located around the river and Kreshchatyk, the main avenue area. These are plenty of various accommodation options to choose from – luxury hotels, AirBnbs, hostels. The map below can help you find the right place in the right area of the city so that you can easily reach nice restaurants, touristic sites and some good shopping spots.

An Incredible City of History

Kiev is an amazing city to explore and this list of attractions is far from complete. Being there, it feels like something is waiting for you behind every corner. It might be a new piece of architecture, a fascinating new museum, or just a good place to buy a coffee and enjoy the culture. Discover what Kiev has to offer for yourself.