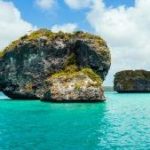 
5 Solo Travel Island Destinations: Island vacations always evoke images of honeymooners or romantic getaways for couples. On my second trip to Bermuda, predictably the first couple I met was there renewing their wedding vows for the second or third time.  Somehow it did not seem like the perfect choice for a solo traveler.  The key is to find an island that offers active sports, cultural or historical sites not just miles of beaches and constant sunshine.

Here are our 5 solo travel island destinations we recommend:

The dual island nation of Trinidad and Tobago has been described as the “United States of the Caribbean” because of its diverse cultures.  Both Hindu temples and mosques dot the countryside along with Catholic and Anglican churches.  English-speaking but close enough to have a view of Venezuela across the Boca de Dragon, Trinidad takes credit for developing the steel drum while its Carnival rivals that of neighboring Brazil.  Tobago with its famous Buccoo Reef is good balance for Trinidad’s more hectic pace. This small island received considerable publicity when the Beatles filmed Help! There decades ago.

If the Tropics hold no appeal, try the far north. Iceland year round, provides ecotours and treks across volcanic moonscapes. However, be sure to check how much daylight is likely if you are traveling during the winter months.  Spending a cold afternoon outdoors in the hot springs makes for a real photo opp. You can capture enthusiasts clad in wet bathing suits dashing for the dressing room amid piles of snowdrifts. If you are seeking more adventure, helicopter skiing provides experts with the opportunity to say they “Skied the Arctic Circle”.

If you are keen on an ecotour but really interested in seeing exotic wildlife, the Galapagos archipelago is a better option.  Almost 600 miles west of the Ecuadorian mainland, the Galapagos have some of the rarest animals in the world as well as species reportedly introduced to the islands by pirates. Although you can’t go for a ride on them, you can follow the path of a Galapagos giant tortoise through the islands.  Penguins stroll by and the only “honeymooners” are the Blue-Footed Boobies who use this cerulean hue to entice future mates.

Another kind of Greek Island vacation! No tilting at windmills as you could in Mykonos. Crete, the largest of the Greek Islands, provides a treasure trove for archeology buffs. It is most famous for its Minoan, Mycenaean and Roman history. If you look hard enough, you may even see King Minos, Theseus, and the Minotaur pass by or at least in your imagination. For another top solo travel package for Crete, click here.

If ancient cultures are too remote for your personal taste, consider Ireland’s later history of the Celts, the Vikings, the Normans and the British. You can kiss the Blarney Stone and drive the Ring of Kerry all in one day.  For the ultimate green trip through Ireland, grab a bike and make your way through the countryside. Dublin blends a historic past with the modern day while the seaside County Cork still has roads occasionally blocked by herds of cows leisurely crossing to the other side. See also this Ireland Budget Package.

5 Solo Travel Island Destinations: If you are booking for next year in any case, consider going off-season for even better discounts.