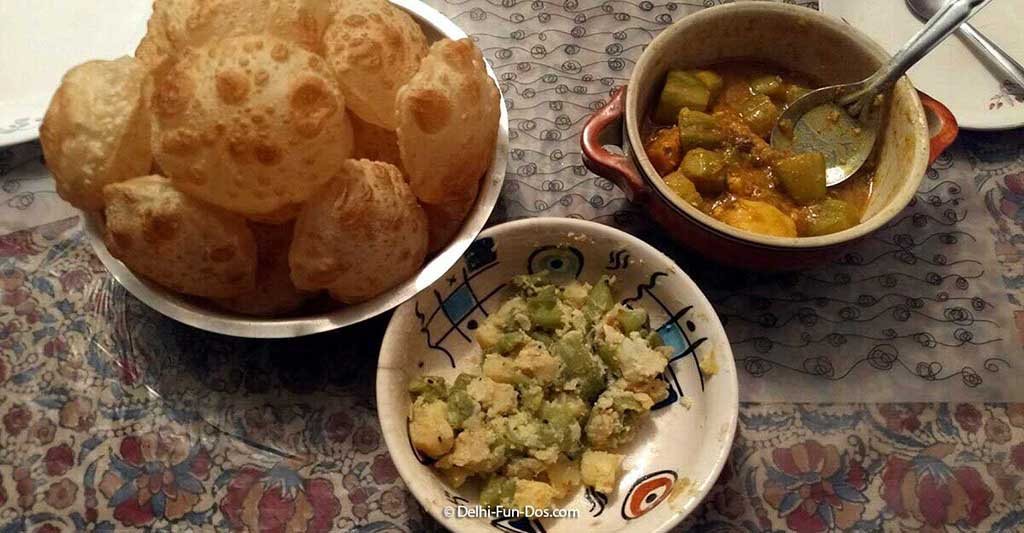 
Bengali food in Delhi, home delivery especially, has proliferated in the recent months during the lockdown. Many chefs are dusting their grandmother’s recipe books to try out lost or little known Bengali dishes. Our post is about a special niche of Bengali food that is not very popular outside Bengal. These hidden gems of Bengali food deserve to be tried at least once.

We were recently part of an interesting project and had to explore regional cuisines of India. Given that lifestyle and food changes every few kilometres, it was like culinary tourism in India! In this process we realised, regional cuisine suffers from a major problem – Indian food stereotypes. We have these notions in our head about certain parts of the country and we perpetuate that in our food choices too.

Take the case of Bengali cuisine. In your head, what is traditional Bengali food? Most likely it is rice and fish or what non-Bengalis call “Machhi.” It is true indeed that everyday Bengali recipes most likely would include a fish dish. This state is close to the coast as well as is crisscrossed by many rivers. No surprise, fish is the staple protein in Bengal. However, there is a whole repertoire of Bengali food beyond “Machh” or meat.

Traditional Bengali kitchen is a treasure trove of very traditional dishes that are strictly vegetarian. So much so, such dishes are mostly devoid of even onion and garlic since these are not considered vegetarian in Bengal.  From experience, we can say that these dishes are a riot of textures and flavours. Ask an expert, maybe Bengali home chefs in Delhi. Compared with the most elaborate mutton or chicken dishes, these vegetarian dishes can impress, or in fact, move even the biggest carnivore among us.

Here is a list of 5 such vegetarian Bengali dishes or as they say Bengali “niramish” menu that consistently blows us over.

A traditional Bengali meal can be separated into courses. The first course is light and something to clear the taste buds preparing them to richer dishes that would come eventually. Shukto or shuktuni is a mixed vegetable stew cooked in mildly spiced gravy made of posto or poppy seeds paste. It is mostly white and runny and had with hot rice. One can use any combination of vegetables as long as it contains a bitter – the karela or bitter gourd. This much-hated vegetable, in combination with other vegetables, gives an interesting twist to this dish. Other common vegetables used in this include raw papaya, plantain, sweet potatoes, drum sticks, flat beans and so on but no onion or garlic. Typical to Bengali cuisine, this dish is a fusion or tastes and also bears a hint of sugar. Some people add a cup of milk to thicken the consistency. A combination of 5 spices, called “panch foron” is used to temper shukto. Ghee may be added at the end to bring all flavours together. Our mouths are watering already!

The pointed gourd or parwal is rather an underdog as far as vegetables go. It is commonly available in Eastern India and is part of the fuss-free daily cuisine here. It does not have too many fans and given its watery disposition, it is consumed as a cure for indigestion. Pointed gourd is called patol in Bengal.

The humble patol dons a gorgeous avatar when cooked in poppy seed paste. This dish, called patol posto, is a mustard oil preparation involving few spices and ingredients like mustard powder, turmeric, green chillis and onion seeds and kalonji. Simmered in hand-ground poppy seed paste along with the above elements, the parwal dish becomes a riot on the palate. The complete dish is a photographer’s delight as well.

Patol posto is ordinarily had with rice but we love it luchi, the Bengali version or the North Indian poori bread.

Cauliflower is a hero among Indian vegetables. Cauliflower has many fans perhaps because of its versatility. It can be cooked in a variety of styles. Featuring among lost Bengali recipes is the dish Doi Fulkopi which is cauliflower cooked in yoghurt based gravy.

Doi Fulkopi is a rich dish and is cooked with a variety of spices. Use of onion is optional. Garam masala is used generously to create flavour. During the cooking process, the cauliflower florets absorb the flavours of the spices as well as the tart of the yoghurt. A dash of sugar is added to balance the tastes. The result is a beautiful sweet and sour dish that is as tasty and aromatic. This is part of fancy cooking and is mostly had with Indian breads or pulao rice.

This item is a cross between poori and dal stuffed kachori of Delhi. The stuffing is made with arhar dal or pigeon pea paste and the dominant flavouring agent is hing or asafoetida. The bread is deep-fried and it inflates. Once served, you break into the raised crust and a very strong yet refreshing whiff of asafoetida greets you. The texture is little crunchy yet soft and the right Radha Ballabhi somewhat melts in the mouth. It is had with chholar daal or aloo dam and is a common weekend breakfast. It also forms the first course of wedding or party dinners setting the mood for a festive fare.

This dish is a must-try.

North Indians are familiar with the simple rice-lentil pot dish khichdi. It is often had when one wants to have something mild and is served to patients for the protein-carbohydrate combination. This dish is cooked sans any spices and is seasoned with ghee at best.

The Bengali khichuri is similar to khichdi to the extent that it is also a rice – lentil combination. But that is where the similarity ends. Khichudi in Bengal has many versions some also comprising fish. But in the commonest form, khichudi is a rich dish flavoured with a host of aromatic spices. Seasonal vegetables like potatoes, peas and cauliflower are added for texture. Dried fruits are added as well to give the dish a festive twist. In fact, if you have heard of the Bengali Bhog offered as prasad to deities, Khichudi is the main dish.

Khichudi is widely available at Bengali restaurants but it is best had at homes. Interesting trivia – given that khichudi is a heavy dish, it is a must-have during the cooler monsoons in a Bengali household. Vegetable fritters are often served as accompaniments with khichudi.

Where to have Bengali food in Delhi

Most of the above items are part of everyday Bengali recipes and you can taste them in eateries at Chitta Ranjan Park Market or Bengali restaurants like Oh Calcutta! You can also approach a home chef who specializes in Bengali cuisine and surely she can help. In our opinion, Bengali food, especially such traditional dishes turn out best when had at home. So if you have a Bengali friend, colleague or neighbour, feel free to request them and get yourself invited. In barter, maybe you can make them taste some regional cuisine you are familiar with. Trust us; you will not regret taking the trouble after trying these vegetarian Bengali dishes.