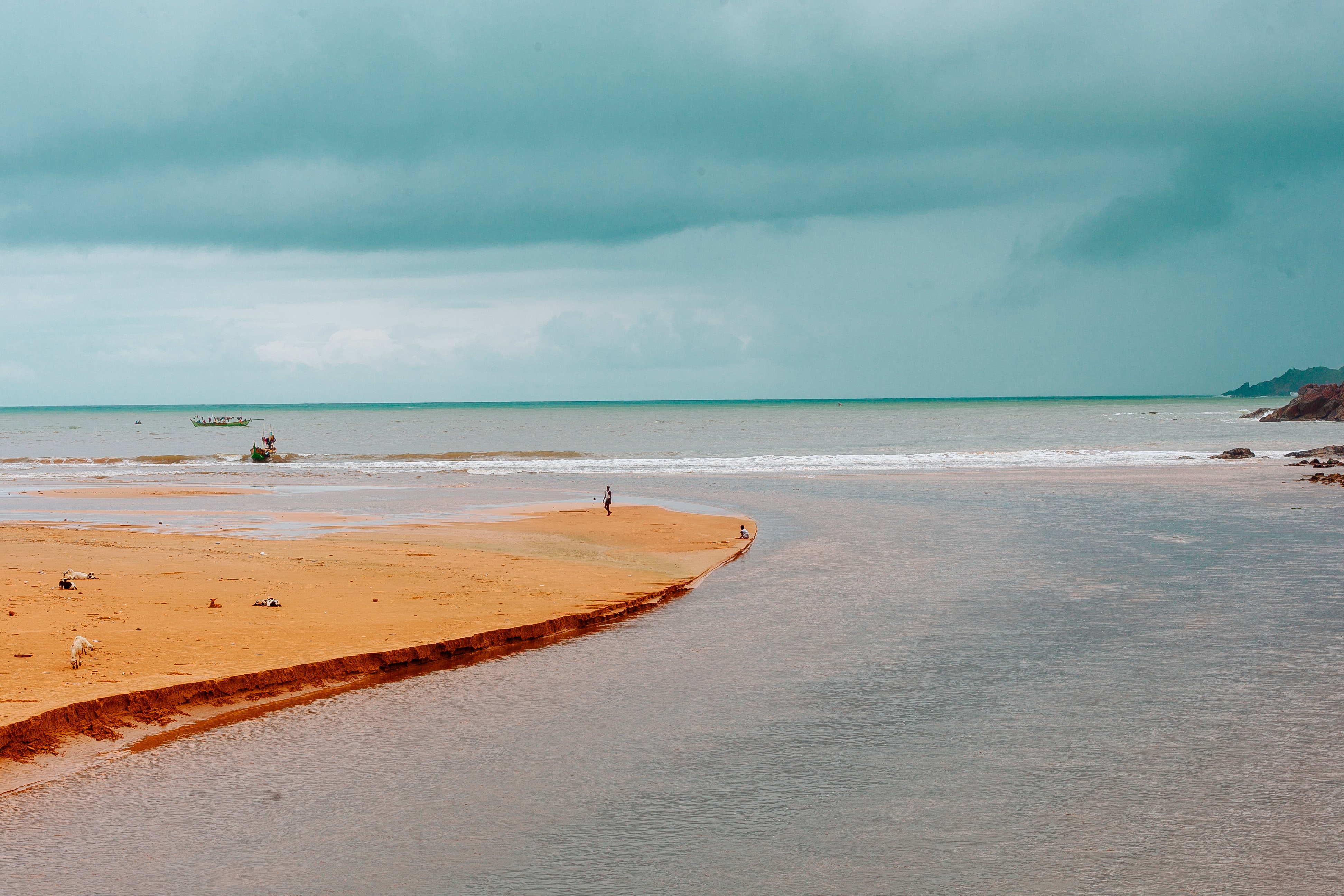 
If you visit Ghana, there’s a huge chance you’ll hear the term “Akwaaba” somewhere along the way. This term isn’t just a greeting, but an important part of their culture that symbolizes their friendliness and hospitality. These traits are what probably made Ghana one of the most ideal destinations for a tourist who wants to have a taste of the continent.

Ghana is a West African country bordered by the Ivory Coast, Burkina Faso, and Togo to the west, north, and east respectively. Interestingly, it’s the only English-speaking country in this region, a standout from its French-speaking neighbors due to the British influence on the country.

Formerly known as the Gold Coast, the country is a rich mine of diamonds, gold, petroleum and other resources that earned it the nickname “Africa’s gem” or “Africa’s golden child”.

Of course, Ghana also had its fair share of tragic past when it became a key point in the African Slave Trade where people were sold and traded off to be sent to the other side of the world. Despite this, however, Ghana still managed to thrive and eventually become one of the most stable countries on this side of the world. Not only is it rich in resources, but it is also home to a very diverse and vibrant culture as well.

Accra – The country’s capital and is probably one of the best areas to visit for a tourist. This city is also where you’ll land first upon arriving in Ghana. It is also the country’s largest region with more than 2 million people calling it home. It’s further subdivided into different districts.

As the country’s cultural hotspot, this is where you’ll find the most happening places mixed in with historically important places. There are beaches in one area of the capital and mausoleums on the other. It also has the country’s main establishments like major banks, schools, Ministries and other major commercial organizations.

Kumasi – Another major and large metropolitan area in the country is Kumasi in the Ashanti Region.

One interesting fact about this city is that no one knows exactly where it originated. The only thing people know is that it has been around for centuries and was the capital of the Ashanti Confederacy under the ruler Osei Tutu.

Aside from being a producer of gold, cocoa, and hardwood, this city is also known as Ghana’s “The Garden City” due to its diverse species of beautiful plants and flowers.

Cape Coast – Known as a fishing port, this south Ghanaian city served a very significant role in Ghana’s tumultuous past as a trading post for slaves in the African region. There were “castles” around town where slaves were housed, sold and traded off to be sent to “The New World” during olden times.

Despite its sad past, Cape Coast remains to be a fascinating part of Ghana for it is the home of around 32 festivals. Local and tribal festivals are held here to celebrate old customs and recognize recent history as well.

What To Do in Ghana

1. Learn to speak a little Twi

Here’s a quick fact about Ghana: It’s home to around 250 languages! These 250 languages are spoken by around 100 ethnics groups or so in the country. Although English is the country’s official language, you will still hear people speak other languages/dialects on the daily.

Their most famous phrase, “Akwaaba” came from the Twi dialect of Southern and Central Kenya. Akwaaba, in general, is more than just a word in Ghana but is also a representation of its wonderful people.

Here are other terms that you can use when in the country:

2. Practice your bargaining skills at the local market

Seems like bargaining is already a part of Ghana’s shopping culture as most stalls in the local markets allow you to negotiate a price that works for both of you.

Accra and Kumasi are home to some of the most lively, vibrant and colorful markets in the country. You’ll find anything you can ever think of from vividly-colored ethnic fabrics, fresh fruits, crafts and many more! Just make sure you’re giving a reasonable price to the seller and you’ll be sure to score some great finds.

Sure, you don’t hear a lot about the Ghanaian nightlife being all the rage from other travelers, but that doesn’t mean it’s any less enjoyable! If anything, Ghanaian nightlife might be the perfect choice for you if you’re the one who likes experimenting on different things.

You can either have a peaceful night by the beach, listen to some classy Jazz tunes or party the 360-degree way atop a high building. However, you’d like to spend your night is completely up to you.

One thing’s for certain, though. Ghanaians know how to have a good time!

Lush tropical forests, exotic animals, and huge mountains are probably synonymous with the word Africa itself. There doesn’t seem to be any country in this abundantly blessed continent that lags when it comes to natural beauty. Every country in the region boasts of its majestic view to offer everyone who comes to visit.

One of the most famous attractions in the country is the Wli Waterfalls, known as West Africa’s highest waterfall which is tucked away deep within the mountains of Ghana.

There are also a few national parks in the country like Mole National Park where people visit to watch majestic animals like elephants and lions or rare ones like the rare antelope in their natural habitat. You can either go around the parks on foot or by riding around the vicinity.

As a country with a diverse ethnic community, it’s only natural that Ghana is full of festivals to celebrate all year round! You can choose between traditional and more modern ones to attend as well.

Homowo is probably the grandest festival in the country which is annually held in Accra in May. It is essentially held to remember the famine that ones took over the country. The locals celebrate during the planting season and before the rainy season starts.

A more modern celebration is also being held in Accra lately called the Chale Wote Street Art Festival which is a way for artistic Ghanaians to showcase their talent by performing songs and dances as well as bringing their out on the streets. This festival attracts thousands of people every year for its initiative to help locals and visitors alike to express themselves.

6. Fill your appetite with the local food

If you don’t get the chance to eat another country’s local food, can you say you’ve been there? In Ghana, you’ll find street food all over the place so there’s no way you’ll be able to miss any of them (and go hungry as well!).

Street food is such a staple in the Ghanaian culture that the locals are said to eat food from vendors more than twice in a week.

Most of the popular street food in the country are staples like rice, meat skewers, fish, and even deep-fried delicacies. Fufu (cassava flour), for example, is one of Ghana’s national dishes and is often found sold in the streets. There’s also Jollof rice which you can eat with almost anything.

Aside from food, they also sell locally brewed beverages like palm wine and pito which you’ll never find being sold in bottles and cans.

7. Take a look back in history

One of the key turning points in Ghana’s history was its involvement in the African slave trade. Traces of this heartbreaking past can still be found in some parts of the country and has become an important stop to those who want to understand more about this event in history.

It was in Elmina and Gold Coast where the famous slave trade castles used to house hundreds and hundreds of slaves who were then sold off and traded for things like textiles and horses. In exchange for material stuff, the captured slaves were sent to other countries where they face horrific working conditions.

Visiting these areas, according to those who had been there, was a very humbling experience and gives a whole new meaning to the freedom we’re enjoying at present.

8. Get in touch with the local

It’s no exaggeration when we say Ghanaians are some of the nicest people you’ll ever meet. They ranked high as one of the friendliest people on earth according to some magazines. Ghanaians are just so welcoming and hospitable that they are probably one of the best attractions the country has.

You’ll most probably find a new friend or two while hanging out in Osu, Accra’s cultural hotspot. Here, you’ll find local stalls selling traditional products as well as cozy cafes and fun bars where you can grab a drink and dance to great music.

If you’re a sports fan, you can also go ahead and book a ticket to a local football game where you can cheer a local team together with the locals.

A lot of major airlines travel to Accra the daily so it’s not hard to catch a flight to the country.

The average flying time from the US to Ghana is around 12 hours while a non-stop UK flight goes for around 6.5 hours.

Unless you’re a citizen of these countries, you will have to get a tourist visa to Ghana:

Ghana also allows the diplomatic, official and service passport holders of the following countries to get in without a visa to their country:

3. How long is the tourist visa application process?

According to the High Commission of Ghana in London, they take about 10-15 working days on average to process visas. They also have an option to have the document expedited for an additional fee.

Since it takes some time before a tourist visa to Ghana gets processed, you must plan things ahead of time.

4. How long is a tourist visa to Ghana valid for?

Single-entry visas to Ghana grant you 90 days of staying from the date it was issued. There are also multiple-entry visas available.

If you wish to stay longer, you can always reach out to the Immigration Headquarters to apply for an extension.

5. Is Ghana safe for tourists?

Yes! Ghana is one of the safest places a tourist can ever visit on the continent. Crime rates are relatively lower than in other places. It is also one of the most politically stable countries in the African region.

Of course, one should always be vigilant when going to a different place, but in general, Ghana is a pretty safe destination for everyone.

There are plenty of transportation options in Ghana for both locals and visitors. One of them is the “Tro-to”, a local minibus which runs on both shorter and longer routes. There are also taxis/shared taxis for short distances and buses or domestic planes for longer rides.

If you want a more private experience, you can also go ahead and rent a car to drive on your own or with a driver. In case you decide to drive by yourself, you’ll have to have an international driver’s license.

7. Will I need a translator in Ghana?

Unless you speak a different language and needs help in communicating in English, you won’t need a translator at all! Ghana is an English-speaking country and has the language as their national one.

8. When is the best time to visit Ghana?

To make sure you get the best out of your travel, plan your trip during the dry seasons from November to March.