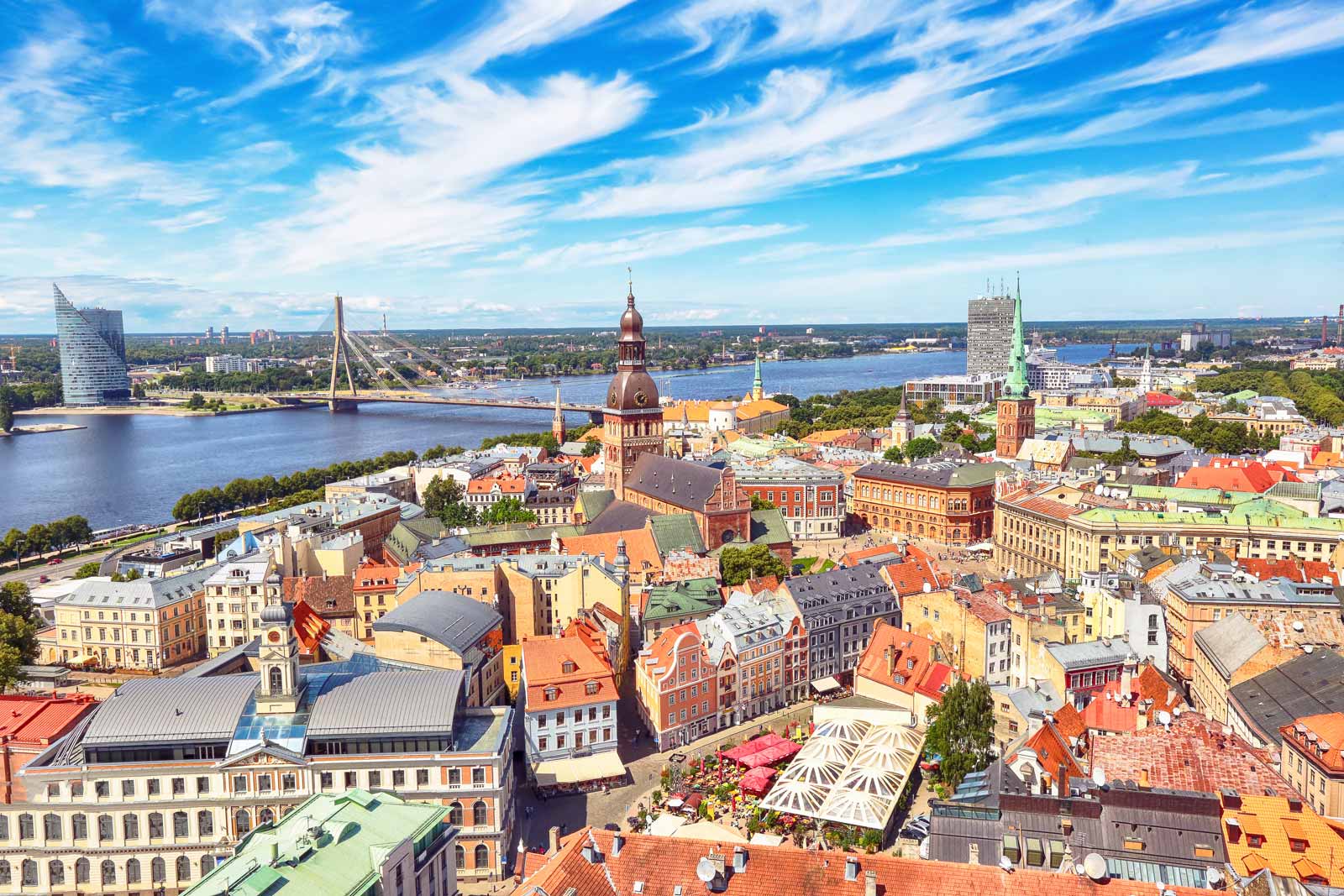 
Looking for a European city break somewhere new? Riga, the handsome capital of Latvia, is a perfect place for a couple of days of exploring. It is a small city, whose centre is very charming and walkable. It isn’t overrun by tourism, either so it is one of the few capitals in Europe where you can explore the hotspots without hordes of tourists.

Things to do in Riga

If you’re into architecture or Art Nouveau design, you’re in for a treat because Riga’s city centre has the highest concentration of Art Nouveau architecture in the world.  In this post, we’ll run through the top things to do in Riga.

Traveling to Riga? Book an Art Nouveau walking tour with a local guide. Latvia’s capital has many facades covered in gargoyles, dragons and wolves. 40 percent of all the buildings in central Riga were built in the Art Nouveau style making it beautiful and unique.

Wandering the cobbled streets of the old town is one of the best things to do in Riga. Every street is a delight, so don’t just stick to the main street of Brivibas iela, or the main and busy Livu Square, get lost and enjoy your stroll. Don’t miss walking the smallest street in Old Town. Rozena iela is so narrow, you can touch the opposite walls at the same time!

Book this highly rated Riga walking tour – take a guided tour with a local guide to explore the heart of Riga, the Old Town. Learn why Latvians put golden roosters instead of the crosses on church towers, why the world should thank Riga for the Christmas tree decorating tradition and more! Book now and get free cancellation with full refund if canceled 24 hours in advance of tour.

Some of the top Riga attractions in Old Town include:

2. House of the Blackheads

Arguably the most spectacular building, the House of the Blackheads is the star of the Town Hall Square. The building was founded as a merchant’s society in the 13th Century. It was designed as a meeting place for a guild of unmarried businessmen known as the Brotherhood of Blackheads. It is famous for being known as where the first public Christmas tree was displayed in 1510.

If you are looking for things to do at night in Riga, there are plenty of bars and restaurants in the old town, and while you’re likely to see the odd stag or hen parties, Riga isn’t spoiled by rowdy, drunk tourist groups the way some of the capitals of Eastern Europe are – and this is a good reason to choose Riga for your city break! Riga’s Old Town is pedestrian-only so it is easy to walk around to enjoy its bars and nightclubs.

Due to the concentration of Art Nouveau buildings, Riga is the Art Nouveau Architecture capital of the world – so you should definitely consider an Art Nouveau walking tour of Riga, to take in the best examples of architecture around the city.

And at the very least, you should visit the Art Nouveau Museum. It is such a unique thing to do in Riga. The Museum is basically an apartment in an Art Nouveau-style building. It was built in 1903 as the home of the architect Konstantins Pekšens who designed it together with Eizens Laube. The apartment has been preserved in its original decor and furniture, so it is like a time capsule: it gives a very real glimpse into life in the early 20th Century. There’s a sitting room, bedroom, kitchen, bathroom, and maid’s room, all with period fixtures and furniture. The building also features a stunning spiral staircase, the ceilings of which are painted with intricate and swirling patterns. This alone is worth the entry price!

4. Take a boat ride on the canal and river

As well as enjoying the nature surrounding the canal, one of the greatest things to do in Riga is to take a boat ride along the canal and the river Daugava. You can pick up a boat on the canal banks near the bridge where the main street, Brivibas laukums crosses the canal. Book a Canal Tour for the best sightseeing in Riga. Cruise along the Daugava River and Riga City Canal to see the most popular sights in Riga including the Freedom Monument and Latvian National Theatre.

The boats are small wooden boats, which take you along the pretty canal, past grand buildings in baroque and art nouveau style. Eventually, the canal reaches the River Daugava, which is huge by comparison to the canal. The boat will feel a little small in this wide, fast-flowing, brownish-coloured river, but you’ll be safe!  You’ll then follow the river downstream, passing the old town and Riga Castle on your right. Then you’ll turn back into the canal system and you’ll make your way back to the starting point.

Where to Eat in Riga after your Tour

It really is a gorgeous, peaceful way to see Riga and a great way to spend an hour. And if you need some refreshments after your tour, there’s a restaurant called Kolonade near the drop-off point, with a small outside terrace, where you could grab a drink or a bite to eat.

5. Marvel at the Stunning Cathedral of the Nativity of Christ

One thing you must do in Riga is to visit the gold-domed Cathedral of the Nativity of Christ. There are several churches in the old town, but this orthodox church on the east side of Esplanade Park is arguably the most spectacular looking. It was built in the 19th century when Latvia was part of the Russian Empire and it is in the Neo-Byzantine style. At one point during the reign of the USSR, the church was closed and re-opened as a planetarium, but it was restored to a place of worship when Latvia gained independence.

It is a functioning church, so there are regular services inside. However, you will want to admire it from the outside because it features intricate and pretty domed rooves plated in gold. On a bright day, they glow and glisten in the sun.  If you need a place to eat after visiting the church, there’s a traditional Latvian restaurant called Lido Vermanitis nearby on Elizabetes iela.

6. Recognise the Past at the Freedom Monument

Outside the old town and just beyond the canal is a tall monument you can’t fail to notice.  The Freedom Monument stands proudly in the middle of a pedestrianized plaza.

The monument is 42 metres high and at the top of the column is a statue of Liberty holding three stars defiantly above her head. It was conceived and designed to commemorate the Latvians who gave their lives in the Latvian war of Independence between 1918 and 1920. During this war, Latvia fought for and won independence from Russia.

There’s a moving story behind the monument. It was unveiled in 1935, but came under threat after WW2, because Latvia was occupied once more by the Soviet Union, who considered demolishing it.  But it evaded destruction and throughout the Soviet occupation, it remained a symbol of Latvian national identity and pride. There were peaceful demonstrations there in the 1980s as Latvia was gearing up to exit the Soviet Union.

7. Learn of the Occupation of Latvia

If you want to learn more about the occupation of Latvia, after observing the Freedom Monument, you could visit the Occupation Museum, which is a good place to learn more about the period of Latvian history when it was occupied first by the Nazis and then the Soviets. In addition, there’s the Museum of the Riga Ghetto and Holocaust in Latvia, honouring the Jews who were victims of the Holocaust.

8. Enjoy one of the many peaceful parks

Riga has several lovely green areas, which help give the city a fresh and lighter feel. If you are looking for things to do in Riga to enjoy the outdoors, take a stroll through one of these green spaces.

One of the best parks in Riga is called Esplanade – it is a shady park area containing the Latvian Museum of Art (also worth a visit), the Art Academy of Latvia, and the Orthodox Cathedral. There are plenty of places to sit in and amongst the trees. The park contains statues of the renowned Latvian poet, playwright, translator, and politician Rainis and one of Oskars Kalpaks, who is regarded as the Latvian army’s first commander-in-chief.

Another great park is the green area on both sides of the city canal. It is truly idyllic: willow trees line the grassy banks of the canal, which meanders gracefully around the Old Town. It is the perfect place to sit and take a moment of stillness in between your explorations. You’ll hardly believe you’re in the center of a capital city!

9. Cross the river to get a view of the city

Most of the best things to do in Riga are on the right side of the River Daugava, but for a different perspective, take a walk to the left bank. You can cross the river on the Akmens tilts or Stone Bridge, which is fairly long (it is a wide river!).

As you cross the bridge, you’ll approach the modern asymmetrical National Library of Latvia building, also known as the Castle of Light, which opened in 2014. The modernity of this architecture is quite the antidote to the older architecture on the other side of the river and reminds you that Riga is a vibrant modern capital.

When you reach the left bank, walk down to the river’s edge and you’ll see the skyline of the old town stretched out in front of you, punctuated by the proud spires of the various cathedrals and churches.

There’s been a castle on this site on the banks of the Daugava since 1330, but it has been reconstructed several times over the centuries. Most of the current buildings were built in the 17th Century.

The castle is the official residence of the President of Latvia.  As such, you can’t explore the interior of the castle, unfortunately, but you can admire it from the outside.

Riga is in the country of Latvia which is part of the Baltic states. It is located on the east coast of Lavia at the Baltic Sea and on the mouth of the River Daugava. Neighboring countries are Russia to the east, Estonia to the north, and Lithuania and Belarus to the South.

When is the best Time to visit Riga?

Riga is located in northern Europe on the Baltic sea. It is cooler than much of continental Europe, so the best times to visit are between April and September when it should be warm enough to wander the city on foot comfortably.  Since Riga is not as popular are other European Cities, you don’t have to worry as much about crowds in the high season.

And these are the best things to do in Riga. I hope these ideas help you enjoy your time in Riga! What are you waiting for, make plans to visit Riga soon!