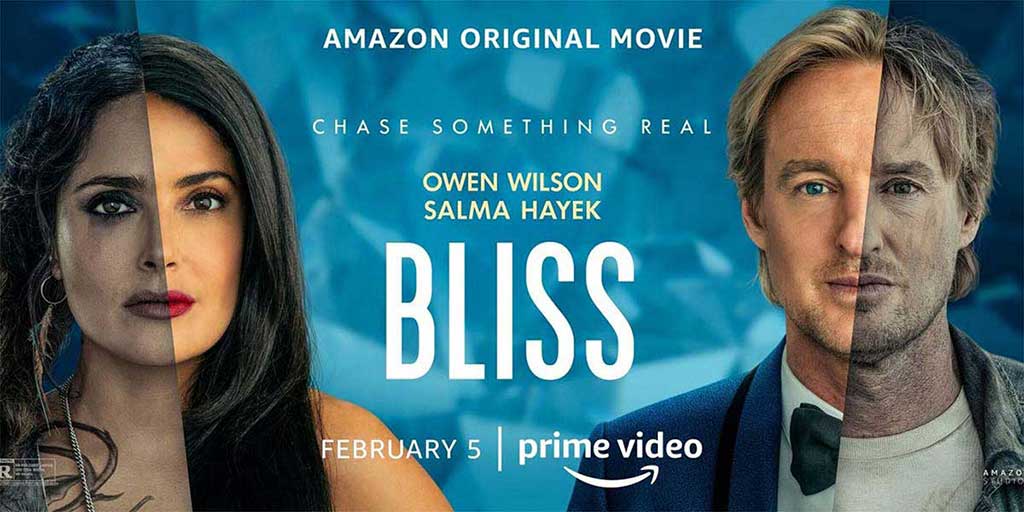 
We are on the lookout for best movies streaming now. In this process, we came across popular movies on Prime Video and landed up watching Bliss, directed by Mike Cahill, a science fiction that almost everyone is watching these days. Here is our Bliss movie review but with solid spoiler alert!

Bliss – the latest Sci-Fi on Prime Video is a disappointment all the way. This 1 hour 45 minutes long futuristic tale never seems to pick up.

What is Bliss about (Spoiler Alert)

Based on the story of Greg (Owen Wilson) who is living two lives – a real one and another one in his fantasies, Bliss is about his realisation of what’s important and is worth fighting for and what is just make-believe. To make him realise that his fantasy life is actually a simulation of a science project, enters a mysterious woman Isabel (Salma Hayek). She takes Greg in and out of his two lives and introduces him to the so-called Bliss – A perfect life. A beautiful world without pollution, riches all around, love in the air 24X7, so on and so forth. Greg who never liked his dead-end 9 to 5 job wants to stay in that Bliss forever but then his daughter keeps entering the real and virtual world and Greg finds it impossible to let go of his real life.

But is the daughter real? Or she is also a computer-simulated character?

The interesting, almost seductive plot got us excited about the film and even before we started watching it, it felt we already were in love with it. But half an hour into the movie and we realised it’s just not getting anywhere. You still understand Greg’s unfulfilled life but what is Isabel’s problem you don’t get to know till the end. Popping yellow and blue crystals to enter and exit realities was absolutely juvenile. Did they invite some kids for the scripting sessions?

The climax is confusing to the extent that you don’t even care to find the answers. Unlike its name, Bliss leaves you feeling nothing. You just don’t feel any emotion for any of the characters. Both the leading actors are ok in what they do but you can’t connect with any of them. The rest of the cast is so unnoticeable like they don’t even exist.

Also read our review of another movie on prime video – The last color. We didn’t like it much but after watching Bliss we like it a little better 🙂