Brussels and Comics go hand in hand. I felt it when I visited Brussels for the first ever time, as a daytrip from London. The tourist office was filled with Smurfs memorabilia. I’ve been wanting to do this Comic Strip Walk since ages. Somehow it never worked out. Recently I decided to split the map into 3 sections (Midi, Central & Laeken) and went on 3 shorter walks. Also on 2 other days I headed to the Comic Strip Museum and Museum of Original Figurines (MOOF) also dedicated to Comics, over a few months!!!

My first stop was Comic Strip Museum. Well, I headed here on one fine weekday morning, but what I had forgotten was that it was August and there was a relatively long queue at the ticket counter, something that I absolutely didn’t expect. Anyways, we did get in soon. The museum is dedicated to comic strips from its history, and from time to time various temporary exhibitions happen here dedicated to various comic strip artists. 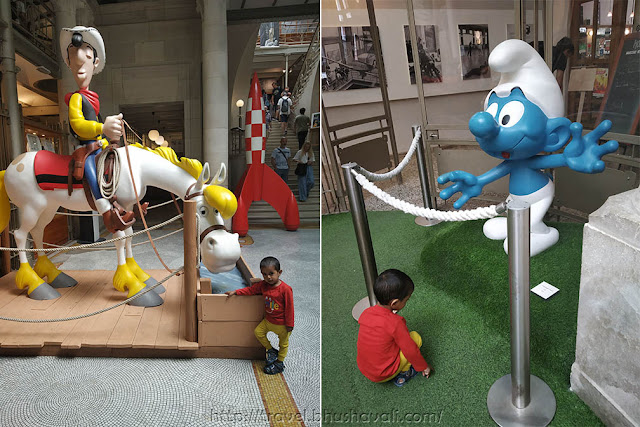 Ofcourse a major section of the museum is dedicated to Tintin, the son of the soil. Did you know, Tintin was created by the Belgian comic artist, Georges Remi aka Hergé! His comics were very futuristic and had a generous use of science & technology. One of his popular stories is Explorers on the Moon where Tintin goes to the moon on the iconic red & white checkered rocket! So, yeah, as soon as you enter the museum, the first thing is the humongous model of this very rocket! 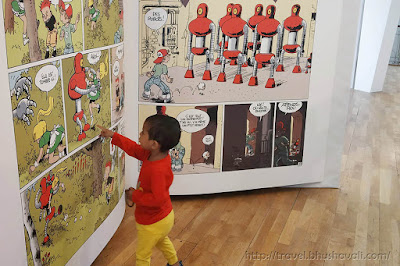 There are several of his strips blown up and printed, but ofcourse in the original, local language – French! But that didn’t matter because Atyudarini was way too fascinated to be bothered about ‘not able to read’! 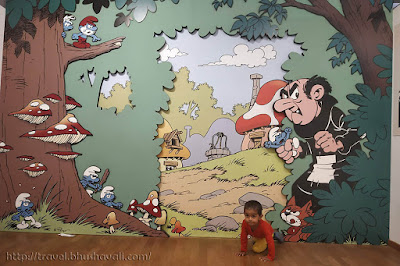 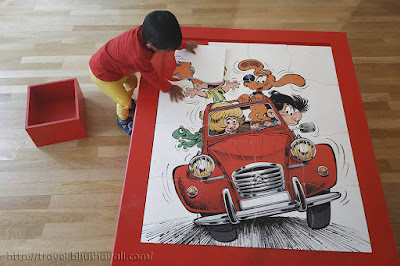 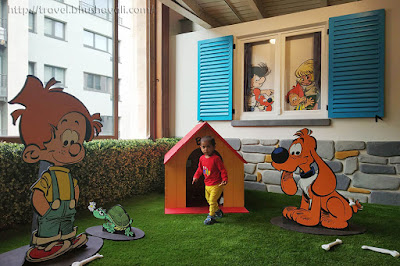 There was another floor dedicated to another ‘children’ of the soil – Smurfs. Yeah, Smurfs was also created by a Belgian artist, Peyo. There is miniature village set-up here as well as simple games & puzzles for the kids. These 2 are permanent exhibitions along with a few other like the history of comic strips & the process of comic strips…. When we went, there was also the temporary exhibition of Billy & Buddy. 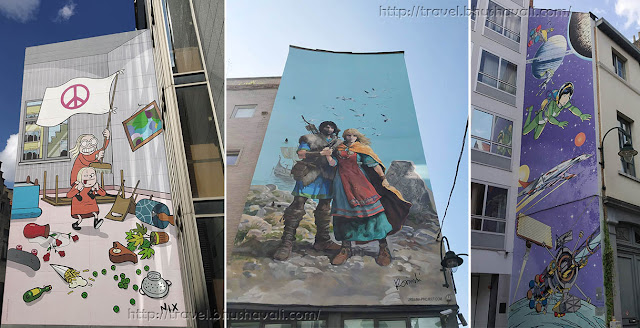 Our next tour was to the murals in Central area where the huge Smurfs ceiling is located. I’ve seen it several times, but anyways I went there again, so I can take a 360° photosphere of it. Here it is! From there we followed the map, and hopped from one mural to another including Tintin & Captain Haddock near Mannekin Pis, Yoko Tsono in Space, Thorgal etc. 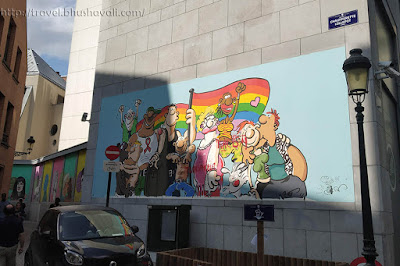 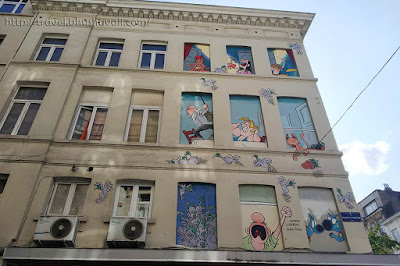 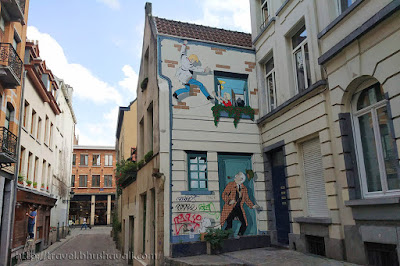 Here are some that are special – the LGBT Mural by Ralf König depicting a wide range of LGBTQ love & expressions; Froud et Stouf where 9 blocked windows of a building showcase the naughtiness of the 2 dogs – the 3 dimensionality of this comic is fascinating, as if you see through the window; Rick Hochet which blends so well with the environment – as if you’re a witness to the happenings – don’t miss the lines of the ‘house’ that continue from the nearby actual houses, the scale & depth perception that matches the location of the mural!!! 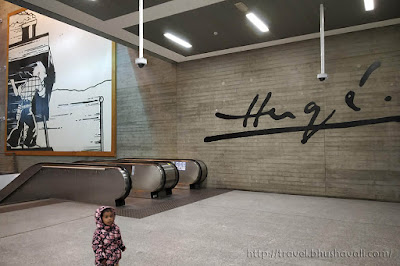 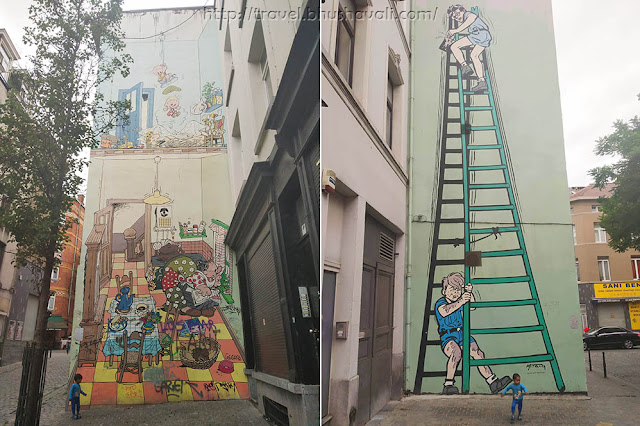 Our next tour was to the murals near Midi. There are 2 Tintin comics associated with trains, inside Gare du Midi. We then went about to see the rest incl. La patrouille des Castors, Boule et Bill, Le Chat etc. 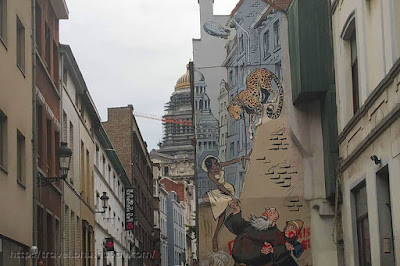 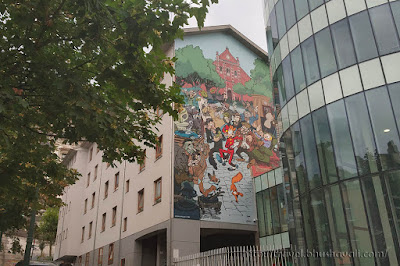 Here are 3 that are special – Leonard, which depicts Leonardo da Vinci, painting the Palais du Justice, looking at it – its placement is such that Palais du Justice is actually in the background; Odilon Verju – Govert Suurbier, in which, again the background is Palais du Justice and from the centre of the road, it can merge; Spirou, where Marolles market and Église Notre-Dame Immaculée are depicted, but the mural is situation a bit away from the locations depicted!!! Our final walk was near Laeken. 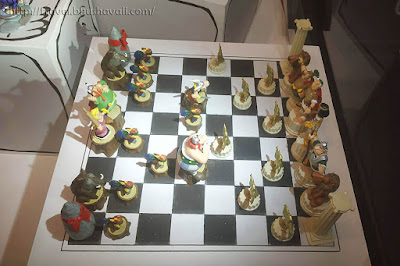 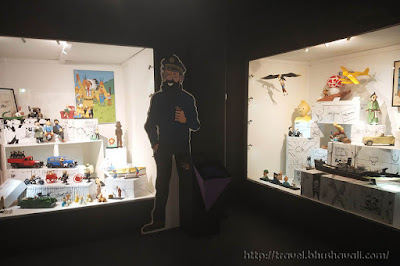 After all these, we also headed to Museum of Original Figurines (MoOF) whose specialty is the limited edition figurines of comic characters over the last century!!! It began with several of Asterix and Obelix as well as Tintin. There was even chess boards with these characters as pieces! There were some Tintin figurines which were one of as few as 18-20 limited editions! 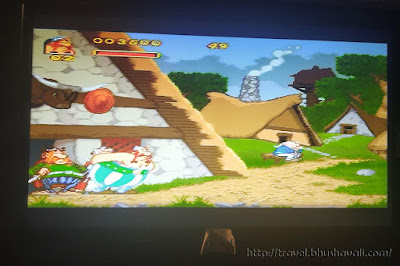 Further ahead was a space of Marvel superheroes. Then was an actual play area with age old nintendo, gameboy and more. I did play for sometime, I was way too fascinated by them…. Haha… 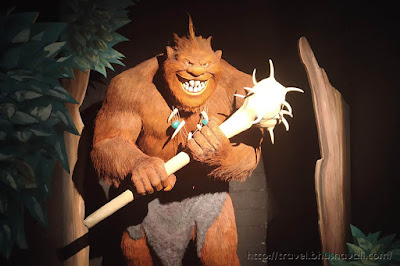 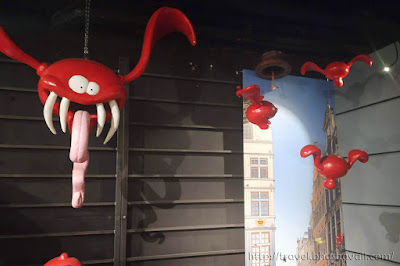 There was a humongous sculpture of Trolls de Troy, which was just 1 of the 5, ever made! It was in a dark room with motion sensor and it did frighten Atyudarini, a little bit! I did spot these and I’m not sure what these are, but I feel they are uteruses and how their reaction would be, when a woman is on her periods!!!! If you’re a woman reading this, you’ll know exactly what I’m talking about!!!
To Get There:
On Google Maps – Comic Strip Centre, MoOF Museum, Comic Strip Route
Comic Strip Route – Here’s a detailed map with photo of the murals & explanation if the official site of Visit Brussels.