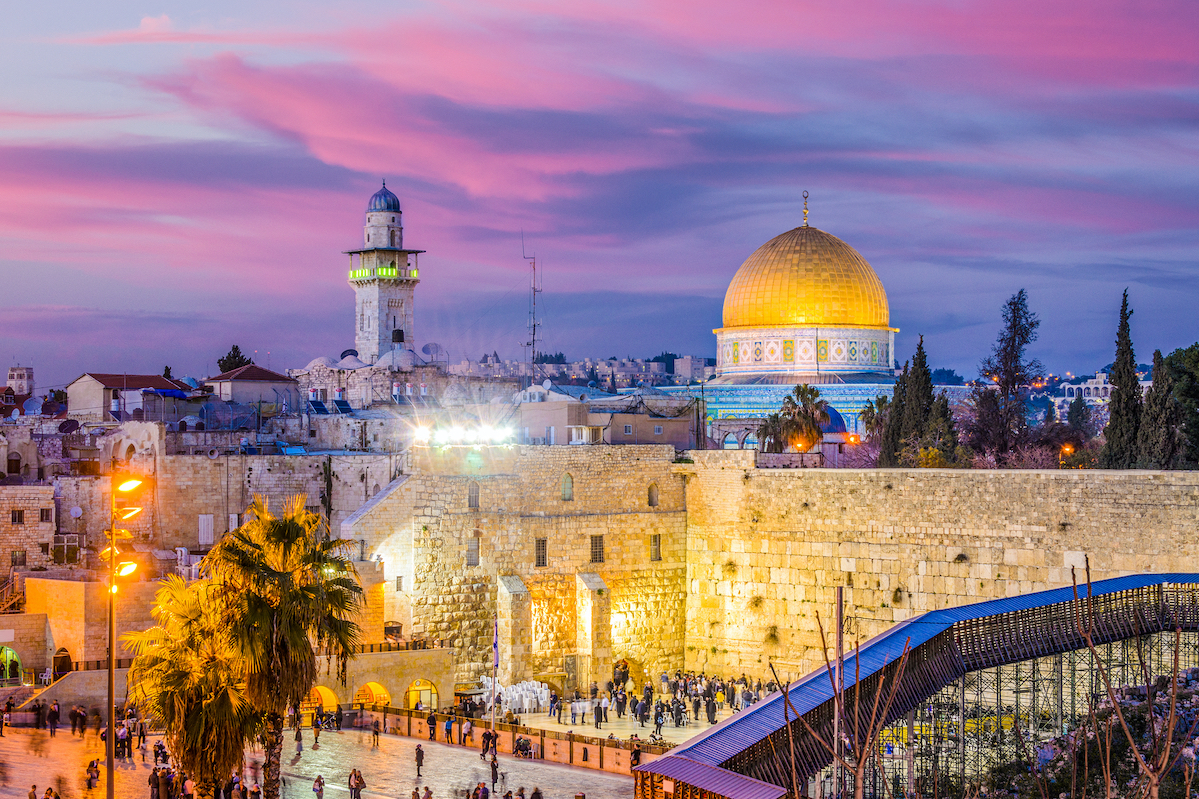 
Jerusalem Bucket List: 15 Best Places and Activities to do in Jerusalem, Israel

The most argued city on earth is also one of the most beautiful and intriguing evidence of history and faith that still exists today. Jerusalem, the Holy Land’s heart, is one of the most sacred sites in the world. It is distinct, spirited, and buzzing with life. Ancient stone walls are cascading within the vicinity of the city. Jerusalem encapsulates many old important worldly sites filled with gems of history throughout the streets.

1. Stroll around the Old City

Get comfortable and strap your shoelaces well to walk around this path on foot. Within the ancient walls and stones of the Old City of Jerusalem lies a deep and meaningful story. The Old City is a pilgrimage to many of Jerusalem’s top attractions and housing, including the Wailing Wall, the Church of the Holy Sepulchre, and Temple Mount.

The walled Old City is divided into four distinct quarters, mainly the Jewish, Muslim, Christian, and Armenian quarters. Each of these quarters gives off their distinct moods, sites, shops, and delicacies.

2. Get to Experience the History of the Wailing Wall

The Wailing Wall is mostly called the Western Wall. It tells a tale of faith, sadness, and grief. Being the only existing and retaining wall of Jerusalem’s Temple, this refers to the place to the Jew’s weeping and lamentation from the destruction of their temples.

It is now considered the holiest site in Judaism and maintains to be a home for the Jewish and diverse people since the Ottoman era. If you want to see more of its tales and story first-hand, touring the Walls with the help of a guide takes about an hour.

3. Pay your Respects on the Mount of Olives

Mount Olives have paved its way into the heart of Christians and Jews. If you want to see a spectacular view, visiting this place won’t disappoint you. You’ll be able to see a picturesque view around, especially the Old City of Jerusalem, Dome of Ascension, Garden of Gethsemane, and other churches located on this fantastic mountain ridge.

It provides peace for the dead with over 150,000 graves, being a traditional burial site of the Jews for years.

4. Take a Tour of Israel Museum

Being the best museum globally, the Israel museum houses a broad range of exhibits, including artifacts, ancient documents, incredible antiquities, and historical art that will inspire and awaken your creative mind from the depth of history’s perspective.

The mentionable examples of what you’ll be able to see are the collection of the Dead Sea Scrolls, a sacred compilation of around 927 texts written thousands of years ago, and a lot more historical texts.

Don’t forget to also look into the picturesque Billy Rose Garden and the Shrine of the Book to fill your mind with knowledge.

5. Visit the Tower of Citadel

The Tower of Citadel, also known and called the Tower of David, is actually, in any relation, not connected to David. It was constructed by Kind Herod to protect his palace in history and named it after Phasael, Mariamne, and Hippicus. In a tragic war, the citadel fell into and crumbled to pieces.

Thankfully, it was rebuilt again. Inside this tower lies the David Museum, which has many stories about Jerusalem. You can also climb up to the rooftop to experience a good view of the city. One bonus you can get when you visit at night is the sound and light show they prepare for visitors.

6. Gain More Knowledge in the City of David

This city houses one of the most significant collections of the ancient world’s archeological findings in the mid-19th century and is still ongoing. Above ground, a vibrant and exciting atmosphere will is present, as visitors are welcome to tour. You’d probably want to visit the exciting knee-deep water adventure with Hezekiah’s Tunnels that you’ll love.

You’ll start with a breathtaking view that reaches the Biblical Jerusalem that can send you back in time. You’ll also reach the Gihon Spring underground, a significant water source of Jerusalem for over 1,000 years. There are more adventures if you visit the place and experience where it all began!

Located between two streets in West Jerusalem, Mahane Yehuda has a taste of authentic life submerged in modern-day Israel. It has an exciting, vibrant atmosphere, much like the familiar world where vendors sell their special aromatic spices and souvenirs. There are appetizing delicacies that would indeed churn your stomach, so be ready to bring money as you’ll get hungry.

The bustling streets are scented with the smell of fresh falafel. If you’re going to shop here, plan your visit on any day besides Fridays as it’s crowded with many citizens preparing for Sabbath day that lasts from Friday till Saturday.

8. Church of the Holy Sepulchre

The Holy Sepulchre is believed to stand directly above the tomb of Jesus Christ, making it a significant holy location in the world. Emperor Constantine built it as a Byzantine place of worship.

Since it was found, the Church has been destroyed twice but rebuilt again. Experience the site’s breathtaking atmosphere and take in its spirituality if you want to strengthen your faith.

The Dead Sea is a must-visit as you can float on the dead sea in one of your visits to Jerusalem.

Just between Jordan and Israel’s borders, this sea has exceptionally high salt content that no living organism can survive in, making you effortlessly float and relax on the waves as you take a dose of sunshine.

10. Go Wil on The Biblical Zoo

You’ll have great fun with your family and friends from the sight and walkthrough of this fantastic zoo, spreading about 62 acres of land. You can look at the free-roaming animals that amount to almost 170 diverse species.

You can also feed the birds to interact with them. Also, don’t forget to stop by at the giant Noah’s Ark cafe at the far end of the zoo and enjoy the petting corner, workshops, night tours, and snack bars along with your journey.

Tread one of the holiest sanctuaries on earth where Solomon built the First Temple for the Ark of the Covenant, where Abraham is offered his son to God, and where Muhammad ascended to heaven.

It also houses one of the oldest mosques in the world on the southern side of the mount. If you’re going to visit, and even if you’re not a believer, it’s worthwhile to experience all the years of its story in one place.

12. Be Emotional in a Visit to Yad Vashem

Yad Vashem means “a place and a name” in Hebrew. This serene and vast 45-acre land has many museums and memorials, including the Holocaust History Museum and the Museum of Holocaust Art. In the commemoration of the Holocaust’s victims, the Hall of Names and the Children’s Memorial is erected.

It would be an emotional trip to knowing the stories of what happened and empathizing with a heart because of the brave people who fought the Nazis. You can pay your respects to these heroes called The Righteous Among The Nations.

Armenians have been a significant part of Jerusalem’s community for centuries since the 5th century. At present, this quarter has the seat of the Armenian Patriarch of Jerusalem and houses all the other landmarks like the Armenian museum, library, and Cathedral of St. James filled with relics and artifacts.

The sun-burnt bricks and cobblestone passages of Jerusalem’s Armenian Quarter are etched with Christianity’s tumultuous history in the Holy Land. It’s going to be a meaningful visit even for people with different backgrounds.

Via Dolorosa, meaning Way of Sorrow, is established by tradition rather than archaeological evidence. You can travel it on foot with it just being 1 kilometer. This walk follows the route of Jesus Christ after his condemnation as he bears his cross towards execution at Calvary.

If you visit on a Friday, you can join the procession along this route led by the Italian Franciscan monks. There is fun waiting from the shops on both sides of the road where they sell souvenirs, food, and drinks.

In between the mentioned Mount of Olives and Mount Zion, the Kidron valley is one of Jerusalem’s oldest areas. Its history lies with the Last Judgement that took place in its vicinity.

You can walk down into the tunnels in Warren’s Shaft, and the mentioned Hezekiah’s Tunnel to proceed onto the Pool of Siloam and Shiloach Pool.

Traveling the Kidron Valley is a great way to experience Jerusalem from a unique vantage point in just 15 minutes.

To help you plan out your vacation to Jerusalem, we listed places to visit and other amazing activities in Jerusalem, Israel. We also listed some of the best travel deals and tour packages and excellent flight deals and accommodation.

Searching for the best hotels, resorts, and affordable flights in the nearby Cities? Check out our list of affordable Jerusalem hotels and resorts via Agoda, Booking, or you may also see available Airbnb properties in the city.