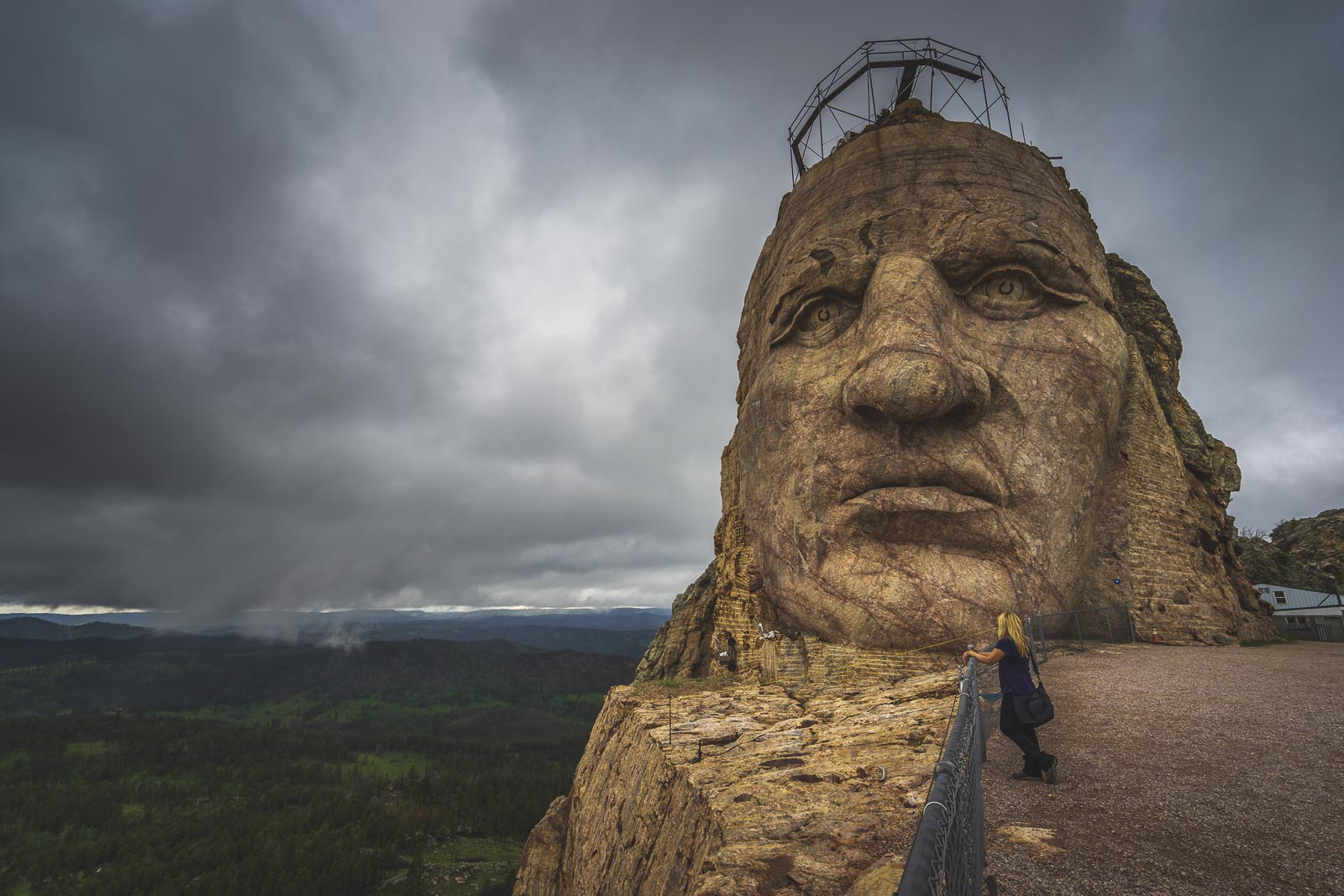 
The Crazy Horse Memorial is just 16 miles (25 km) down the road from Mount Rushmore and should be at the top of everyone’s list when visiting South Dakota. This massive memorial pays tribute to the Lakota Sioux warrior, Crazy Horse and is dedicated to the Lakota People.

Construction of Crazy Horse began in 1947 after Chief Standing Bear invited sculptor Korczak Ziolkowski to build a monument in response to Mt. Rushmore. The Crazy Horse monument is 74 years in the making and Ziolkowski’s children and grandchildren have now taken over the project continuing work on what is set to be the largest monument in the world.

Located in the Black Hills of South Dakota, the Crazy Horse monument was built to counter the insult of the white faces of Mount Rushmore on the Lakota Sioux native land. The Black Hills are located in Lakota territory, but when gold was found in the area in the late 1800s, the Sioux were forced to give up a portion of their land in 1870 after already being promised the land in an 1868 treaty.

To have a monument like Mount Rushmore built on sacred land that the government took from them to celebrate the settlers who killed so many Native Americans was a slap in the face and the Lakota People searched for a way to create a monument to show that they also had heroes. And their hero of choice was Crazy Horse who led rebellions against the US army.

Mount Rushmore was built between 1927 and 1941 and during that time, then Sioux Chief Henry Standing Bear invited Ziolkowski to carve a memorial to the Sioux nation in 1939. Ziolkowski promised the Lakota People that no federal funding would ever be involved in building the monument and the project has relied on public funding for nearly three quarters of a century. Zoilkowski worked on Crazy Horse his entire life often sculpting by hand until his death in 1982. He was obsessed with his work and wanted to help right the terrible wrong that the American army did to the Indigenous People of the United States.

When will Crazy Horse Be Finished?

Crazy Horse won’t be finished any time soon. When completed it is set to be the largest monument in the world. Standing at 641 feet long and 563 feet high is 10 times larger than the faces of Mount Rushmore. When finished it will depict Crazy Horse riding on a horse. Today, the face is completed but there is a long way to go to finish the horses head. In truth, there is really no completion date in sight reminding me of the ongoing efforts at La Sagarada familia in Barcelona (only on a grander scale). He thought the project would take 30 years to create, but here we are three quarters of a century later with no end in sight.

Crazy Horse is set to be the world’s largest monument and it is going to be incredible. The face itself is already a feat of engineering but once the horse’s head is complete it will be extraordinary. When finished Crazy Horse will be sitting atop horse head with a flowing mane as his left arm extendeds in front of him, pointing.

The idea is to have Crazy Horse dwarf the heads of the American presidents and it will indeed. Crazy Horse Will be the largest monument in the World.

When you stand beside the face of Crazy Horse, you feel the enormity of the task. This will be the largest sculpture on earth when it is complete. When we were there, we were told that the arm and horse head are expected to be finished sometime in the next dozen or so years.

Who Was Crazy Horse?

Crazy Horse was a Lakota Sioux Warrior who lived form 1842 to 1877. He was one of the last hold outs of the Native American People to surrender to troops. Crazy Horse had no intention of living on a reserve but negotiated a surrender to bring his ailing people in for help. He was then going to leave them in peace and live out his days on his own. Instead of sticking to their word, the United States military double-crossed him and (literally) stabbed him in the back murdering him.

This Crazy Horse monument is dedicated to his strength and heroism. Crazy Horse was instrumental in leading many battles against the American troops including their defeat of Custard at the Battle of Little Big Horn.

What to Expect when Visiting Crazy Horse

Visiting Crazy Horse is a fascinating walk through history. As Canadians, we didn’t know much about the Battles of Little Big Horn or the heroic Native American. We had heard the names, but never delved into the history.

A tour of the museum at the base of the monument tells the history of the Native American culture and history. Make sure to watch the orientation film that shows Ziolkowski at work with his children. It shows the blasting that went on to begin and how they started by lugging the equipment up the mountain.

The Museums of Crazy Horse Monument

There are several things to see and do at the museums of Crazy Horse memorial. The Indian Museum of North America, the Mountain Carving Gallery, and the Ziolkowski Family Life Collection are all on display to learn of Indigenous culture and the history of the family.

In the gift shop, you can buy local art and souvenirs to support the economy. There is also a craft to display of all the instruments used to blast the rock over the years.

The Face of Crazy Horse

A bus will take you out to the site for a closer view, but if you want something more, you can book guided van ride and then walk up to the face. The van will take you most of the way up so don’t worry, it’s not a gruelling walk. The van tour costs $125 per person but it is worth it. To see this magnificent carving up close is a once in a lifetime opportunity. Plus, all proceeds are charitable and help to continue the work of the foundation.

For more information on visiting, go to the Crazy Horse Memorial website for details.

If you would like to get even yet another view of these two memorials, take a helicopter flight to view them from above. Black Hills Aerial Adventures offers one of the most reasonable helicopter tours we’ve ever seen and it gives you a birds-eye view of both Mount Rushmore and Crazy Horse. It also offers a lovely view of the Black Hills of South Dakota.

The helicopter doesn’t get as close to the monuments as we would have hoped and it doesn’t do an even split for views. (Meaning one side gets more view time than the other) If you do book a helicopter tour and want to see more of Crazy Horse, sit on the left hand side.

You don’t really get close to either Mount Rushmore or Crazy Horse, we assume it has something to do with airspace security. But for the price, it’s a good tour.

The Mount Rushmore Crazy Horse tour is $205 per person, but there are cheaper tours to see just one of the monuments for $110. If you have never been on a helicopter, they offer discovery tours starting at $49.

Crazy Horse is located in the Black Hills of South Dakota just 45 minutes from Rapid City. Plan to spend 3 – 4 hours at Crazy Horse as there are plenty of things to see and do.

Besides the museums and sculpture itself, there is a terrace where you can order food. At night there is a laser show over the monument that runs from May 28 to Sept 30 in 2021.

There is parking at the memorial but there are tours from Rapid City if you don’t have a car. Although we highly recommend renting a car in South Dakota. Part of the charm is having the freedom to explore not only the memorials, but the national parks, and gorgeous scenic drives.