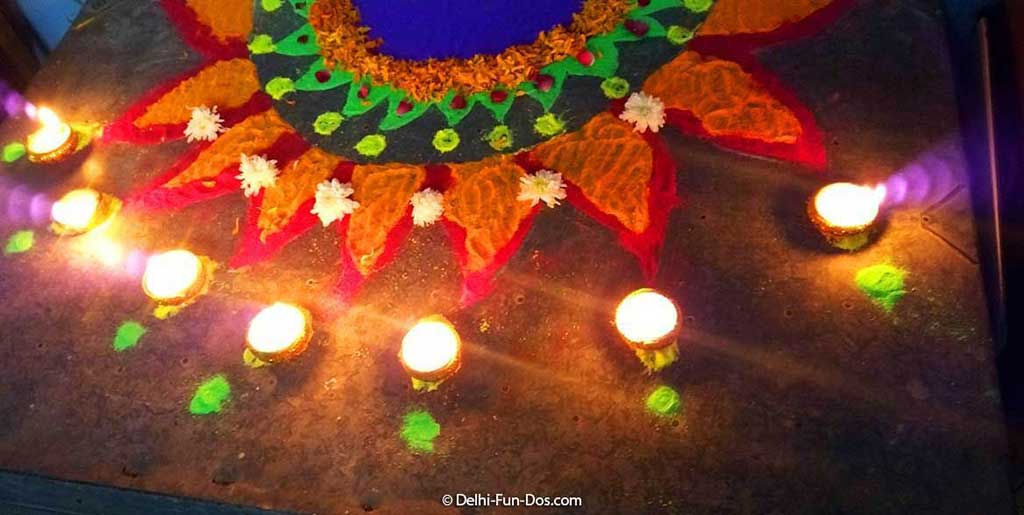 The festival of lights or Diwali 2020 is around the corner. Perhaps the largest Indian festival, Diwali is celebrated not only throughout the length and breadth of India but by Hindu diaspora across the globe. Wearing Diwali traditional dresses, many outsiders would also participate in this happy festival. Some standard Diwali traditions are followed everywhere. But there are many other forms of celebrating Diwali in India. Diwali is celebrated as Kali Puja in West Bengal and that is a fun occasion too.

Deepawali or Diwali, the most popular Indian festival is around the corner. Millions of Indians in India and the diaspora across the world are going to celebrate the Hindu festival of lights. Celebration of Diwali at Times Square, New York in the United States, in the last couple of years, has added extra sheen to this event. We all look forward to Diwali every year. The sweets, the lights, the gifts, the Diwali Melas, the Khadi and other handloom clothes we get to flaunt, the Indian handicrafts we bring out to decorate the home during the Diwali Lakshmi Puja, there are a zillion ways we celebrate Diwali every year. While these are the popular ways of marking Diwali, did you know there are many other forms of celebrating Diwali in the country? In this post, we are going to talk about Kali Puja in West Bengal that is celebrated on the occasion of Diwali. Why only Bengal, Kali Puja is also held in many temples across the country including Shri Kali Mata Temple, Patiala that we visited.

Kali is one of the more aggressive aspects of Goddess Parvati, the consort of Shiva. She is known to be the slayer of evil. Kali is dark in colour, wears a garland made of skulls, has four arms and her blood-red tongue sticks out. Often times, she is depicted standing on her consort, Lord Shiva. As per certain Hindu beliefs, her black complexion symbolizes nothingness as black absorbs all other colours.

Goddess Kali is worshipped in the Eastern states, particularly West Bengal, on Diwali night. Like Durga Puja, Kali Puja is mostly a community festival organised by neighbourhood residents of social activity clubs. Pandals or makeshift marquees are erected and the Kali idol is worshipped here.

Besides, Kali is a popular deity in West Bengal and there are numerous Kali temples in this state. We have already written about Dakshineswar Kali Temple in an earlier post. Kali Puja is held with utmost devotion following Tantric rituals at all these temples. Since Kali is a violent form of the female divine power Shakti, priests and organisers are very particular that every ritual is followed meticulously. Devotees fast throughout the day and after the worship rituals are completed, they offer Anjali or flowers to the Goddess chanting mantras led by the priest. It is only after this they break their fast.

Incidentally, Goddess Kali is worshipped irrespective of religion or language or nationality in West Bengal. The Chinese community in Kolkata, who is the force behind the famous Tiretti Bazar breakfast market, also maintain a Kali shrine in the Chinese locality Tangra.

They celebrate Kali Puja here following all rituals and the prasad or food offerings, in addition to the standard fare, contains chowmein and chopsuey! That is some much needed break for the divine palate. 😊

Many devotees celebrate Kali Puja with worshipping the deity at home. They get an idol, perhaps smaller than the ones in pandals but perform the rituals with utmost strictness and devotion. Some of the rituals are similar to Durga Puja since both the deities are aspects of Goddess Parvati. However, Durga Puja is at least a 5 days affair and Kali Puja is an overnight observance. Hence, Kali Puja is easier to organise. Therefore, many favour Kali Puja over Durga Puja for home worship.

Many families in West Bengal celebrate Lakshmi Puja as well on Diwali. This is called “Dipannita Lakshmi Puja” or “Illuminated Lakshmi Puja”. A unique ritual of this worship is that first an effigy of “Alakshmi” or “Anti-Lakshmi” is burnt to destroy evil. Thereafter, Goddess Lakshmi is welcomed and worshipped. In fact, in the famous Kalighat Temple of Kolkata, Goddess Kali is worshipped as Goddess Lakshmi on the occasion of Diwali.

Kali Puja is also celebrated at many places in New Delhi. There are many Kali Temples in Delhi NCR. The most popular Kali temples in Delhi are Chittranjan Park Kali Mandir Society at Chittaranjan Park, New Delhi; New Delhi Kali Bari on Mandir Marg, New Delhi; Dwarka Kali Bari at Sector 12 Dwarka; Vasant Kunj Kali Mandir at Block – B, Vasant Kunj; Dakshin Delhi Kali Bari at R.K. Puram, New Delhi and so on. All these Kali temples arrange Kali Puja and have neat arrangements for devotees to congregate and partake in the observances. Not only Bengalis, but many North Indians also come to these temples for blessings during Diwali. Most of these temples offer community dinner after the worship is over.

Bhog is a comprehensive term for the food offerings to a Hindu deity. The Kali Pujo bhog mostly contains the rice and dal pot dish khichuri, vegetable fritters of 5 varieties, mixed vegetable dish labra, potato and cauliflower curry, sweet and tangy chutney and rice pudding or payesh. Few places also offer fish or goat meat dishes to Goddess Kali. All the dishes are cooked using separate stoves and utensils and are devoid of onion or garlic. Goat and bull sacrifices were part of Kali Puja rituals. However, thankfully, animal sacrifices during Kali Puja have mostly been discontinued.

Goddess Kali is worshipped on Kali Puja and Goddess Lakshmi is worshipped on Diwali. Both these deities emanate from the concept of Shakti or female divinity that has been worshipped from the Harappan civilization era in India. Hence, while the rituals vary, there are many similarities between Diwali and Kali Puja celebrations.

First, the lighting of lamps or diyas is a must for both the festivals. Like the rest of India, people in West Bengal light clay lamps, candles and electric light chains in modern times to celebrate Kali Puja. After all, this ritual announces the victory of light over darkness, a valid statement all over the world.

Second, traditionally, crackers are burst for Diwali as well as Kali Puja. Although currently crackers are rightly discouraged for environmental reasons, it was difficult to find a quiet moment in Kali Puja night in Kolkata till some years back.

Thirdly, both Diwali and Kali Puja culminate in Bhai Duj festival on the third day. On this occasion, sisters anoint brothers with sandalwood paste and other auspicious elements and pray for their long life and well-being. The brothers, in turn, bless the sisters and give them gifts. Notwithstanding women’s liberation movements in India, this festival has stood the test of time and continues unchanged.

Finally, both the festivals mark the end of the major Hindu festival season for the year till Holi. Hence, the celebrations are performed with double the gusto.

Activities like visiting relatives, exchanging gifts, attending card parties and decorating the house are integral to Diwali but were not common for Kali Puja. That said, in today’s era of globalization, people want the best of both worlds. Hence many of these Diwali rituals now assimilate with Kali Puja in Bengali households. The more the merrier we say.

Things are different and quieter this year. The carnival-like Durga Puja in Kolkata was extreme mellow this year and people are gearing up for a subdued Kali Puja and Diwali festival. The state government has already started circulating cracker ban notices. Perhaps most Kali Pujas are going to be ritualistic with no assembly of people except the priest and the core organisers.

Diwali, from the looks of it, is going to be mellow than other years. People are avoiding markets and gifts and sweets are being sent online. To minimise exposure at crowded confectionaries, many at home are polishing their gourmet skills and preparing Indian sweets that they would have otherwise outsourced. To avoid assembly, directives are being circulated to deter people from holding pre-Diwali gatherings and card parties. Therefore, instead of visiting friends and family, people would perhaps be greeting each other on video-calls.

Fireworks are inherent to Diwali celebrations. Since the last few years, while the government has been imposing bans against crackers, people still go about buying and bursting surreptitiously. But Diwali 2020 is different. Since air-pollution may aggravate virus spread, crackers are a big NO. We do hope, people are going to totally refrain from crackers this year.

The focus this year should be more on family-time through indoor card and other games. People would hone cooking skills of lost Indian recipes and concentrate more on home decorations. Many would avoid getting flowers from the market and create DIY festoons and garlands with colourful fabrics and streamers lying at home. Most people would perhaps continue with the Lakshmi Puja as usual and follow that up with home-cooked Indian dinner.

All we pray and wish this year is a safe Diwali and a healthy, pandemic-free year ahead for all.