Dubai Parks And Resorts Tickets (Not An Affiliate Link)

The idea of a theme for parks and resorts has become a trademark and earned International fame. In 2016 Dubai parks and resorts broadcasted its official theme song, All the Wonders of the Universe, by award-winner Alan Menken.
Witness distinctive animated superheroes that make for amazing rollercoasters and adventures, involving the Smurfs, Godzilla, and The Hunger Games. Visitor attractions on a real set at Studio Central will also observe life.

The Gateway to Dubai Parks and Resorts is Riverland Dubai. An adventurous journey through time and witness the street atmosphere, cinemas, and cuisines from four different periods that have influenced the environment, the French Village from the 1600s, the 1950s America, the 1930s British Raj, and the early 19th century Europe.

Welcome to a world of thrilling adventures, a destination where you can discover, grow, and bond together with your family. Dubai Parks and Resorts consisted of three top-class theme parks and one water park. It is also home to Riverland Dubai, Lapita, a rare road to limitless fun. In addition to the free Q-fast to Motiongate and Bollywood, all guests staying at Lapita Hotel & Resort will have unrestricted multi-park access for the period of stay.

It is a surprise to know the only theme park in the world is promoting India’s iconic film industry in the United Arab Emirates, Dubai not, in Mumbai. At Bollywood Parks, you will become a part of the magical world of Bollywood movies. Make your Bollywood dreams come true with immersive exhibits, exhilarating walks, multimedia displays, and exciting musical concerts across five theme zones. Catch the region’s first Bollywood musical in Broadway form, Jaan-E-Jigar, at the magnificent Raajmahal Theatre.

But even though you have never seen Dabangg, Bahubali, or Pk before, you can always get a kick out of these and other Bollywood blockbuster-based attractions. This family-friendly DPR park with its plethora of action-packed 3D and 4D motion rides has a budget of around half a day.

The graphics and special effects are fantastic, but in plotline words, do not expect too much. In terms of live entertainment, the Dubai parks and resorts such as its explosive stunt show, flamboyant productions of song and dance, and a glamorous musical extravaganza performed in the palatial Raajmahal Theater (separate tickets required).

There are 40 rides and amenities scattered across six thematic lands in the new foray into the Legoland Dynasty: Warehouse, Lego City, Fantasy, Realms, Adventure, and Miniland. These specifically targets thrilling pre-teens. At this DPR resort, you will not find any white-knuckle rides. But soft ones like the adorable Dragon that sails through a medieval castle or the ‘Submarine Escape that offer sharks and coral close-ups. Visit Legoland for the perfect family experience that suits children between the ages of two and 12. Enjoy over Forty Lego-themed exhibits and adventures at the Legoland Waterpark before you head out to splash, explore, and even create your own Lego raft.

There are also several interactive items, particularly in Lego City, where children can obtain a driver’s license, pilot a plane, and put out a fire. Meanwhile, the aged are especially fascinated by Miniland, where more than 20 million Lego pieces recreate famous attractions such as the Burj Khalifa and regional wonders such as Petra and the Babylonian Hanging Gardens. To explore the park, you would require at least one whole day, two if you include a visit to the nearby water park.

The ultimate destination in the Arab world for parents with kids aged two to twelve is Water Park. Legoland Dubai and Legoland Water Park are hands-on activities that allow families to engage through immersive swings, water slides, models, and construction experiences in themed adventures. Legoland Water Park is smaller and gentler than any of Dubai’s older liquid playgrounds with its 20 rafts, tube, and body slides. A nasty looking water park and a lazy river trip negotiated in a Lego raft you have built by yourself but still quickly provides a full day of fun. Twin Chasers, a side-by-side ride where you can challenge dad or mom, and the Splash Out slide with its 18m drop are among the top hits.

Dubai’s Motiongate is called Hollywood in the desert. It has more than thirty rides and attractions and live shows influenced by classic and latest Hollywood movies. There are three zones named after the film studios in the park. At the entrance point of Dubai’s Motiongate, there is a pretty low-key Columbia Pictures region, where you can assume the character of ghostbuster, board the Green Hornet fairground ride and visit the spooky Hotel Transylvania. The Center of the park is DreamWorks indoor site with the most famous joyful character from Kang Fu Panda, Tarzan, and How to Train Your Dragon.

The theme parks in Dubai are not inexpensive. There are numerous ways to alleviate the problem by purchasing tickets online, searching the website of the Dubai parks and resorts for promotional giveaways, purchasing multi-day packages, or benefiting from seasonal discounts (usually in summer, but beware of the heat!). In their room prices, some hotels have park admission. For example, booking into the Lapita Hotel comes with unrestricted access to all four DPR parks. While prices at Atlantis the Palm provide Aquaventure entry. Guests of any Jumeirah community hotel (including Jumeirah Beach Hotel, Al Qasr Hotel, and Mina A Salam) can visit Wild Wadi Waterpark on an unlimited basis.

Thus here we can conclude that the mega project of Dubai and resorts provide you the best opportunity to make your leisure time memorable. These theme parks have gained global fame. Here we have provided all the necessary information regarding facilities, ticket-buying guide, and hundreds of fun activities you can avail of. So, must like and share this article with your friends and family members who are planning to spend their vacations to enjoy world wonders. 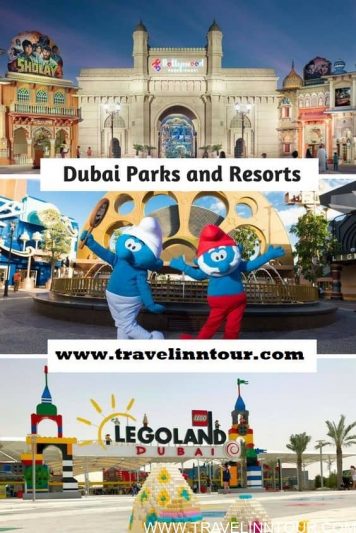