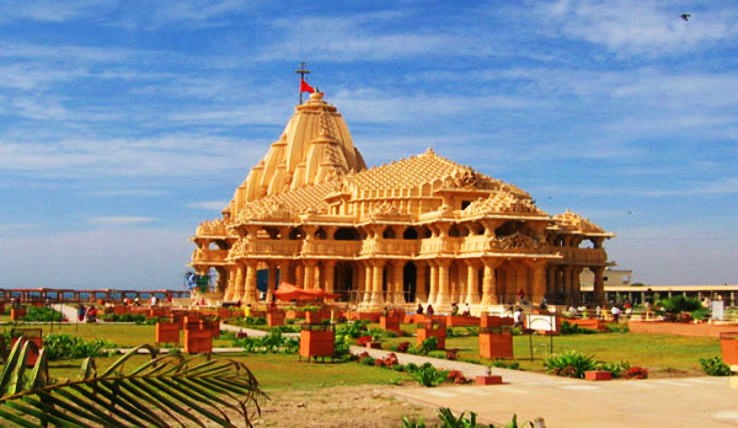 
Dwarka is an ancient city which is located in Gujarat. According to the Hindu religion, Dwarka is the only city that is part of both Sapta Puris and Char Dham. Dwarka was a kingdom of Lord Krishna and also Nageshwar Jyotirlinga Temple which is one of the 12 Jyotirlinga. This Jyotirlinga is also located in the city – Dwarka.

Here in this blog, I will tell you about some temples of Dwarka which you must visit while visiting this holy city.

The other name of Dwarkadhish Temple is Jagat Mandir. The main deity is Lord Krishna. The unique Chalukya style architecture is the core thing and it attracts many tourists from all over the world.

There are premises in the temple which are devoted to Subhadra, Balarama and Revathy, Vasudev, Rukmini, and many others. The devotees who come to the temple first take a bath in the Gomti river and then prefer to continue to the temple. The main festival of every Krishna Temple is Janamashtami – The day on which Lord Krishna was born. On this eve, in Dwarkadhish temple, thousands of devotees chant the holy name of Lord Krishna.

Nageshwar Temple is a very famous temple in Dwarka. Nagnath Temple is the other name of this temple. Lord Shiva which is also known as Nageshwar Mahadev, is devoted here by their devotees.

Lord Shiva’s statue which is 80 feet tall which appeal to many people towards it. The typical Hindu architecture attracts tourists across the globe. On the festival of Maha Shivaratri, there is a grand celebration in the Nageshwar Jyotirlinga Temple.

Iskcon has branches in many cities of India as well as it has branches worldwide. In Dwarka, Iskcon temple is located on Devi road. This temple is dedicated to Lord Krishna and Goddess Radha adorned in rich attires and decorated with so many flowers.

This temple has its delicacy and dignity. This temple can be seen from the terrace of the Dwarkadhish Temple.

Bhadkeshwar Mahadev Mandir is an old Temple in Dwarka which is dedicated to Lord Shiva. The temple has stood in this beautiful city for the past 5000 years.

During monsoons, the temple gets drowned in the sea every year. It is believed that it is a ritual that is performed by nature and the devotees believe that this is a form of Abhishekam which is done by mother nature.