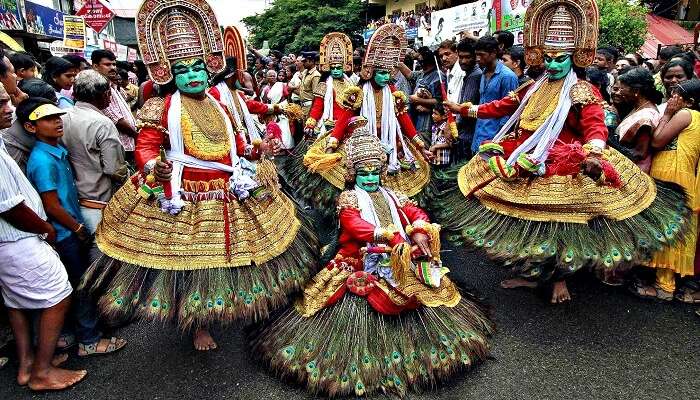 
From backwaters to India’s most colourful festivals, God’s Own Country has it all. The people of Kerala celebrate festivals with passion and fervour. There will be dance shows, boat races, bejewelled elephants, colourful rangolis, and many more. Here in this blog, I will tell you about festivals of Kerala which you should experience once in your lifetime.

Kerala’s backwaters are well-known in the country. The Kerala Boat Festival raises the beauty of these shining water canals. The race is all about excitement, team spirit, and communication among the members.

This festival comes around the month – July, August and September. 8th August 2021 is the date for the Nehru boat festival.

2. The state festival of Kerala – Onam

Vishu festival is Kerala’s most important as well as the well-known festival, marking the start of the Malayali year. Often celebrated at home, the highlights of this Hindu festival include a family Pooja and an evening feast.

A collection of auspicious items is gathered the night before Vishu and then placed in a specific manner in a small vessel. This vessel is placed in the prayer room. The morning begins with Kani Kanal, Lord Vishu’s first sight. Later in the day, the whole family gathers for a Sadya (midday feast), which is accompanied by fireworks in the evening.

This festival is a well-known and eagerly awaited festival in Kerala. This 800-year-old festival draws attention to art and folk dances. There are over 400 different types of Theyyam performances to choose from. The best ones are Raktha Chamundi, Kari Chamundi, Wayanad Kulaven and Muchilottu Bhagavathi,. This is one of Kerala’s most well-known festivals.

Attukal Pongala is one of Kerala’s most popular festivals. The festival is held at the Attukal Bhagavathy Temple in Thiruvananthapuram’s Attukal district. Women across the state come to the temple to celebrate Attukal Pongala. This festival puts women of all religions and castes together.

The festival holds the Guinness World Record for the largest annual gathering of females. The number of women who attend the Pongala festival grows year after year. In the Pongala ceremony, only women are allowed to take part. It is a ten-day festival which takes place during February – March. On the final day of this festival, you can see a huge crowd.