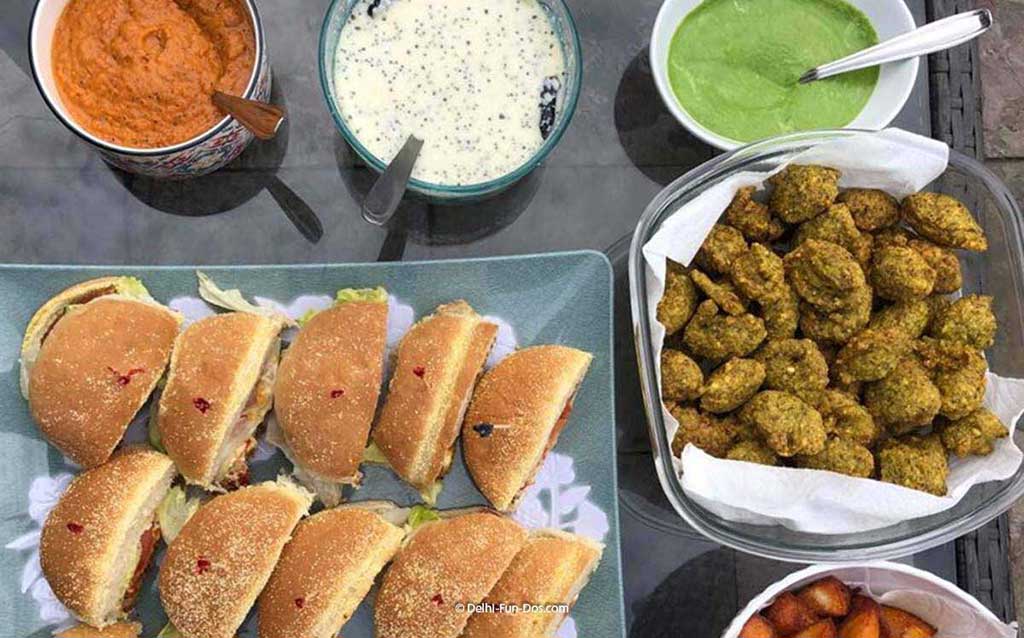 
Bedabrata has been in California, United States of America for a while now. Silicon Valley, the software industrial zone in Southern California, is home to thousands of Indians or techies from our country. In Bay Area cities like Sunnyvale, Milpitas, Fremonte, restaurant names like Vrindavan, Delhi Chaat House, Sarvana Bhawan and store names such as Diya’s Collection, Madras Grocery House, Mehra Jewellers, Nitin Jewellers are so very common. For Bedabrata, it is a home away from home.

In fact, given that Indians crave for their staple diet, they make a home away from home kitchen wherever they go. Indian spices such as turmeric, cumin, coriander or fenugreek seeds or powder, cardamom, cinnamon, nutmeg, dried red chillies and chilli powder, so on and so forth are easily available at groceries. These spices are popular among Indians, Americans and people from other countries. Add to that, Indian vegetables and greens such as mustard leaves and fenugreek or methi leaves are available almost throughout the year in the US. Therefore, it is not difficult to satisfy the Indian palette in this part of the world.

Also Read: Food that we would not mind travelling for

Bedabrata’s folks live in Cupertino, a town in Southern Bay Area. They have a fully functional Indian kitchen where his mother churns out one Bengali food delicacy after another. But this time, he had a unique experience. He had the great opportunity of trying many regional Indian dishes in the neighbouring households. This was like a culture travel throughout India sitting in a foreign land. Not only did he taste familiar as well as rare dishes of Indian cooking, but he also learnt fun trivia through his Indian culinary journey. Here is a quick list of what all he had:

Akki roti or a pancake made with rice-flour batter is not very popular in many parts of India. It is a Kannadiga staple and many Bangaloreans get nostalgic at the mention of this dish. To the best of our knowledge, Carnatic Café  in Delhi would serve this dish. But Bedabrata landed up having the most authentic akki roti at his neighbour Ruta’s home in Cupertino. Ruta hails from Bangalore and he made two varieties of akki roti, one was plain and the other with dill and some seasoning. On the side, on request, Ruta made Kosambari, a Kannadiga salad made with pulses and some julienned vegetables. A spiced brinjal curry was served on the side. Apparently, this version of brinjal dish is a combination with akki roti, and that was food trivia for us.

Marathi misal pav is anyway our favourite food at Dilli Haat. Bedabrata landed up having misal pav at Amit’s home. Misal is a mixture of sprouts, boiled chickpeas, hot spices and is topped with savoury crispies. It is served with pav bread or bread roll that has been roasted with butter. This combination is healthy yet has a strong kick of hot spices making it popular among Indians. Bedabrata can’t handle a lot of spice so added some sweet chutney in his misal mix. Notwithstanding the heat of the food, Bedabrata stuffed himself at Amit’s place, who, no surprise for guessing hails from Maharashtra.

Pav bhaji is another Marathi dish that Bedabrata digs. Deepali invited Bedabrata and his folks and made pav bhaji for them. Now this dish needs no introduction. Yet, for the benefit of the uninitiated, bhaji is a spicy mixed vegetable dish loaded with butter and pav is an Indian breadroll. This combination balances fibres and carbohydrates and the butter somehow brings everything together. Knowing Bedabrata’s low threshold for spice, Deepali had kept it mild. The foodie in Bedabrata was very happy 😉

Amitabh has been in various cities in USA forever and he is presently in Milpitas, California Bay Area. However, he traces his routes to Patna, Bihar. He made goat curry in Eastern Indian style. Replete with ghee and spices and red gravy, this dish was as decadent as it can get. Yet, it satisfied Bedabrata’s home-yearning soul a lot.

Fried Idli and Dosa at Sukanya’s

Sukanya, a Tamilian is known to be a good cook. She invited Bedabrata for lunch and for starter, she served something that looked like deep-fried potatoes. One bite and he realised this was something way more delightful that fried potatoes – this was fried idli. We are very fond of this item and have, a few times, over-indulged ourselves at the Delhi restaurant Chidambaram with some regret later. Sukanya’s fried idlis were crisp with a golden yellow crust and soft rice cake inside. The spice was minimal and she served some fresh coconut lentil chutney and tangy tomato chutney. The whole fare was most refreshing. Lunch was crispy dosas and wholesome, mildly spiced sambar, the South Indian lentil soup. She served dried mashed potatoes on the side. Bedabrata now endorses, Sukanya of San Jose is not a good but a great cook.

Any food story that features a Bengali cannot end without sweets. Bedabrata visited a relative and was served patishapta – a sweet crepe with coconut filling and dudh puli – sweet filled dumplings boiled in sweetened milk and flavoured with cardamom powder. These are virtually lost Bengali delicacies and it is most surprising Bedabrata had these in a remote California town – Belmonte.

In the course of our blogging experience, we have realised food says a lot about a person’s culture. And no travel is incomplete without trying local cuisine. This notion gets somewhat fudgy when Bedabrata has some of the best varieties of regional Indian cuisine, at its home-cooked best, in the distant shores of America. Maybe wherever we are, we carry a little bit of India with us and create a fusion that is the best of both worlds – our country of birth and our country of work.

We take a bow to that. Meanwhile, big thank you to all the amazing folks who gave us such scintillating content and a lot of food for thought.