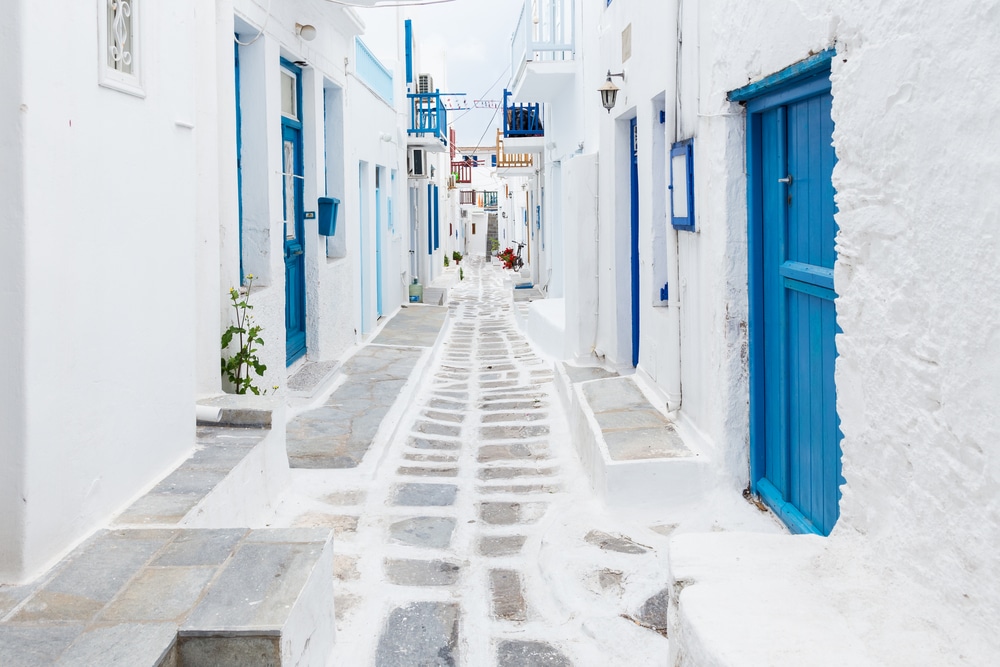 Two of the most famous Greek Islands, Crete, and Mykonos are historic, vibrant, beautiful, filled with attractions, and lined with stunning beaches. Each island is a fantastic destination in its own way, but the possibility to visit both during one Greek island holiday makes them even more attractive. If you’re trying to figure out how to get from Crete to Mykonos and back, we have the answers for you below.

Crete is Greece’s biggest island. It’s a major destination on its own, a place where you could spend a week or more exploring beaches and ancient sites. However, Crete is also a much-visited destination among people who are island hopping in Greece.

Enjoy epic beaches like Vai Beach, Preveli Beach, or Elafonisi, visit the superb Heraklion Archaeological Museum, see the Monastery of Arkadi, hike to Mount Ida, and so much more awaits.

Easily accessible from the Greek mainland, especially from the port of Piraeus, Crete is also one of the gateway islands to the glorious Cyclades island group. For example, as this post will tell you, you can go on a day trip from Crete to Mykonos—or stay longer in Mykonos—as well as travel to other beautiful islands like Santorini, Naxos, or Paros.

The cosmopolitan island of Mykonos is a phenomenal holiday island in the Cyclades, one of the top destinations in the heart of the stunning Aegean Sea.

Home to crazy nightlife, discotheques, and beach clubs, Mykonos has rightfully earned the fame of being Greece’s top party island. It is, therefore, a very popular summer holiday destination among Europe’s youth.

Not everybody is aware that Mykonos also has a few hidden villages that are quiet and relaxing and can be great for a family holiday.

Additionally, the beaches in Mykonos are among the most beautiful in Greece, some of them ideal for water sports. In contrast, others are simply calm and virtually waveless, ideal for small children.

Mykonos To Crete By Plane

If you plan well, you might be able to find flights that can get you between both islands in under 3 hours. However, all flights, whether they depart from Heraklion or Chania in Crete or from Mykonos, will involve a layover in Athens. (Most flights depart from Heraklion, the island’s capital.)

The total duration of your flight between Mykonos and Crete depends greatly on the length of your Athens layover.

If you’re looking for the best way to travel from Crete to Mykonos, flying is a viable option, for sure. However, it is absolutely the least scenic traveling method. You’ll be missing out on those breathtaking seascapes and island views the Greek Islands are so famous for.

For a real Greek island-hopping experience, it’s best to travel from Crete to Mykonos by ferry.

Mykonos To Crete By Indirect Ferry

By far, the most scenic way to travel between Mykonos and Crete is an indirect ferry route. These leisurely journeys consist of separate ferry trips between Crete and one or more of the Cycladic Islands.

You could, for example, take a ferry from Crete to Santorini, explore that world-famous island, and take a second ferry onto Mykonos. Other ferry connections from Crete run to islands like Naxos and Tinos, both of which are also linked with Mykonos.

For obvious reasons, this is the longest—both in time and distance—way to get from Crete to Mykonos. However, you do get a ton of stunning scenery, iconic locations, possibly great food, and an unforgettable island-hopping experience in Greece in return.

Note that you probably will have to book different ferry tickets for this indirect route between Crete and Mykonos.

Mykonos To Crete By Direct Ferry

Arguably the most popular, most convenient, and best way to go from Crete to Mykonos is the direct ferry. Simply hop on board in Heraklion, sail the gorgeous Aegean Sea for a few hours, and you’ll be in Mykonos before you know it.

There are a variety of options, though. The fastest way to go on a day trip to Mykonos from Crete is by hydrofoil. These fast ferries can get you there in just over 4 hours, but the ride can occasionally be quite bumpy.

On the other hand, there are many different slow ferries as well, run by a few different ferry companies. This option typically takes a couple of hours longer than the hydrofoil, up to 8 hours in total, but the sailing from Crete to Mykonos will be much more laidback and smoother.

Whichever ferry type you choose, the journey is straightforward, involving little more than embarking and disembarking at the ports. And, of course, it’s amazingly scenic, too.

What Is The Main Ferry Port In Crete? 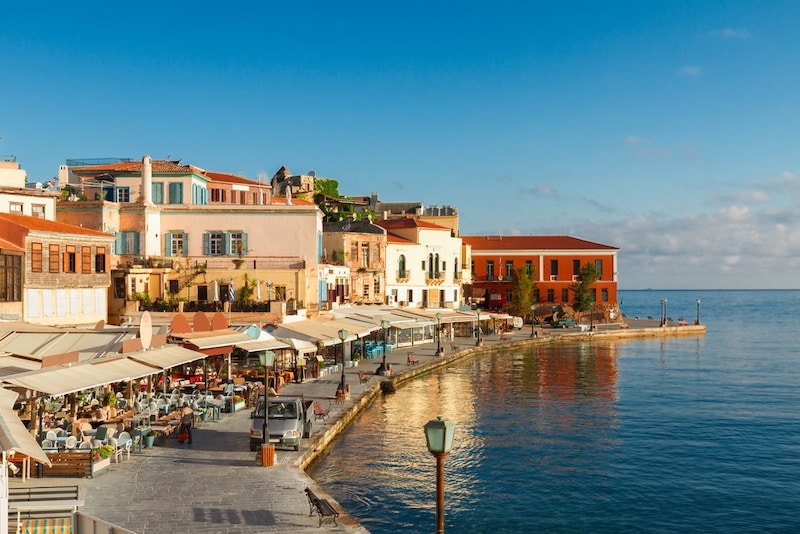 There are two main ferry ports on the island of Crete, Chania, and Heraklion, both of which have numerous connections with the Greek mainland port of Piraeus.

However, for trips to the Cyclades, the island group just north of Crete, which includes Santorini, Mykonos, and Naxos, the port of Heraklion is where you need to be.

How Far Is Crete From Mykonos?

So, how many miles is Mykonos from Crete, you might wonder. The distance from Crete to Mykonos, specifically from the port of Heraklion to Mykonos, is about 127 nautical miles. This is approximately 146 miles or 235 kilometers.

How Long Is The Crete To Mykonos Ferry Ride? 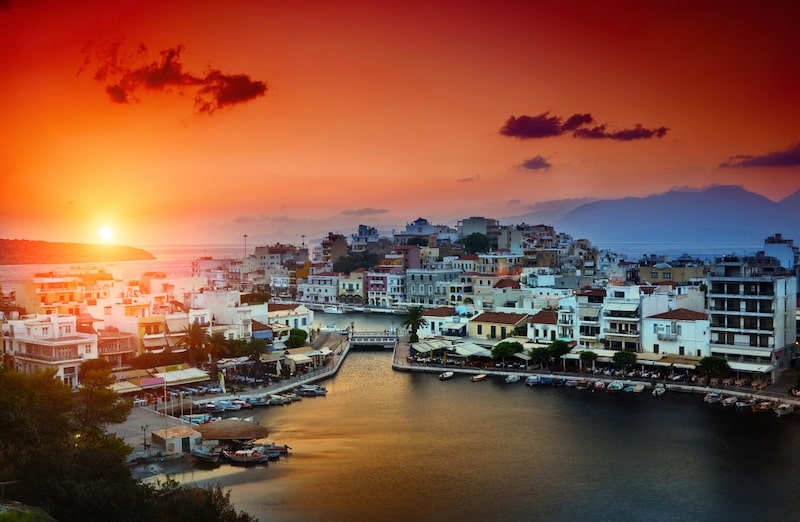 The time it takes to cover the distance from Crete to Mykonos by ferry depends greatly on the type of ferry you choose. Your itinerary, of course, will affect the duration of your trip. So, depending on the Crete to Mykonos ferry routes, these crossings typically take between 4 and 8 hours on average.

Note, though, that there’s quite a lot of wiggle room here. While a high-speed hydrofoil from Crete to Mykonos can get you there in about 4 hours, a slow indirect ferry route could take up to 8 hours, possibly even longer if you stop for lunch at places like scenic Santorini on the way.

How Much Does The Ferry From Crete To Mykonos Cost?

This, too, is dependent on the route of your ferry from Heraklion to Mykonos, the company, and the type of vessel. The Crete to Mykonos or Mykonos to Crete ferry price also varies according to the tourist seasons, seat type, and possible discounts on offer. Prices also go up if you’re taking a car with you.

For all these reasons, it’s difficult to predict how much your ferry from Crete to Mykonos will cost. The best way to find out is to contact the ferry companies directly. Generally speaking; however, you should expect to pay from €60 to €100 per person for a one-way ferry ticket.

How Many Mykonos Ferries From Crete Are There Per Day?

In the summer months, which are the high season in the Greek Islands, there are typically 2 to 5 daily ferry crossings between Heraklion and Mykonos. This number goes down to about 1 per day in the low season. There are currently three companies that offer ferry transportation from Crete to Mykonos:

All these companies have their own seasonal Mykonos ferry timetable and sailing days, which is why the number of daily ferries in the high season fluctuates between 2 and 5. Check each company’s up-to-date schedule for their current sailing dates and times.

Additionally, it’s good to know that the majority of departures from Heraklion are in the morning, usually between 8 and 10 am. Plan accordingly! It’s a good idea to get to the port of Heraklion an hour before your scheduled departure. Particularly in the busy high season, things can be quite crowded.