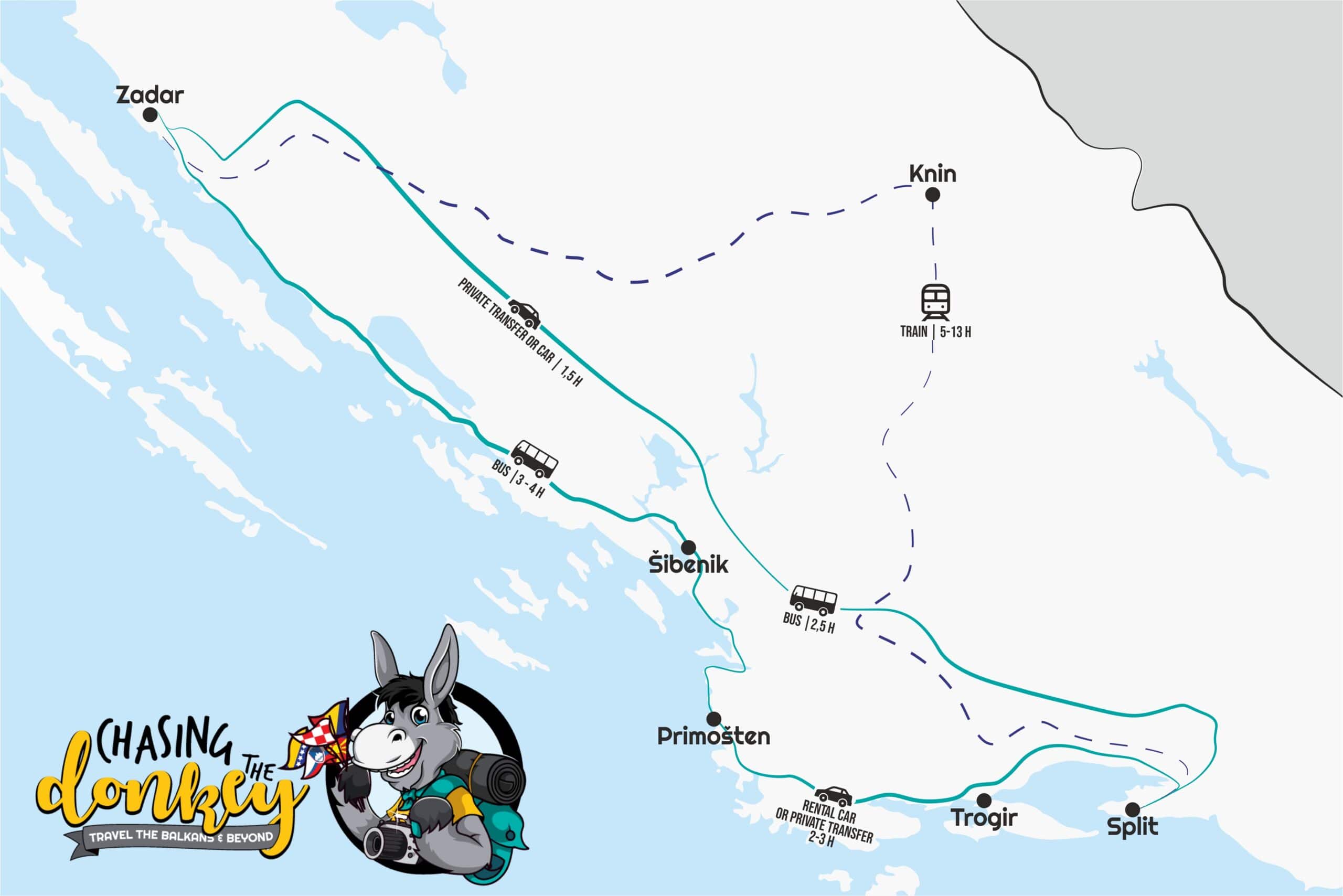 You’re in Split and have just completed your 7-day cruise, explored the UNESCO-listed Diocletian’s Palace, and now it’s time to go and check out the things to do in Zadar.

First, you will need to know how you can travel from Split to Zadar. With the number of intercity transfers at an all-time high and thousands of tourists traversing this great country in an attempt to see as much of Croatia as possible, getting from Zadar to Split or Split to Zadar has never been easier. The other plus with a visit to Zadar is that it is centrally located makes an excellent base for Zadar day trips to Croatia National parks and Nature Parks.

The first thing you need to know is that the distance from Split to Zadar is 158 kilometers. The journey can take you anywhere from 1 hour 40 minutes up to 4 hours if you go by bus along the old coastal road. Yikes!

While the Zadar to Split drive along the coast road is undeniably pretty, you will need plenty of time. You’ll also need to know whether you are traveling from Zadar Airport to Split or Split Airport to Zadar as both airports are outside the city and require a bus or taxi ride to get into the city.

If you are budget-conscious, taking the bus from Split to Zadar is by far the cheapest mode of transport. Tickets start around 80 kunas. If time is of the essence, you’ll want to ensure you catch the direct Split to Zadar bus using the A1 freeway, which is a 2.5-hour journey.

Something to be aware of is that there is an alternate Split to Zadar or Zadar to Split route that takes the old coastal road and stops in various towns between Zadar and Split. This prolongs the journey significantly and can take up to 4 hours. Be sure to check before you buy your tickets.

The good news is you are spoiled for choice with a huge number of bus departures from the Split and Zadar bus stations. However, if you can book your ticket in advance, do consider that. In the peak tourist season, the Zadar to Split bus and Split to Zadar bus fills quickly. It’s also important to note that the Split bus station is located beside the Split Port. Only a short walk from the Split Riva, it is super-accessible.

This is by far the fastest and most comfortable way to travel is to take a Private Transfer from Split to Zadar, taking around 1 hour and 40 minutes. A Zadar to Split transfer offers 5-star service. You’ll get picked up at your accommodation and be transported in a modern vehicle, some of which have Wi-Fi, directly to your destination in Zadar. The drivers are professional, English speaking, and super friendly.

For more information on private transfers from Split to Zadar, contact Octopus Transfers.

If you wanted to take a Split to Zadar taxi, this is also an option. However, the price is very similar; however, the quality of the vehicle and driver are not even close to the same.

With such a huge coastline in Croatia, you would think there would be a ferry service between Zadar and Split, but unfortunately, there is not. Your only option is if you have lots of time and fancy a bit of sailing in Croatia, then perhaps sail from Split to Zadar.

It’s a great way of combining spending some time on the sea while getting you from Zadar to Split. If time is of the essence, sailing from Split to Zadar or Zadar to Split is definitely not a good idea.

The Split to Zadar train service takes around 7 hours, including a stop in Knin. Hmm, I think not! Better to save you money on those Split train tickets!

Realistically, there are really only two options when traveling from Split to Zadar. The Zadar or Split bus or a private transfer.

By far the most convenient way of getting from Split Airport to Zadar is by private transfer or taxi directly from the Airport. The big plus with a Private transfer is it a door-to-door service, and you have a meet and greet service at the airport. Lastly, with a Private transfer, the price is fixed and agreed in advance, so there are no surprises when it comes to the bill. For a free quote, contact Octopus Transfers.

Like the aforementioned taking a transfer from Zadar Airport to Split is by far the most convenient and comfortable way of getting between these two places; it is also worth noting that when traveling in a group, the price is similar to catching the bus, so it is very cost-friendly. Once again, contact our friends at Octopus Transfers for a quote.

What To Do In Zadar

So you have managed to get yourself to Zadar from Split, and now you need to know what to do in Zadar. Here is a quick list of the things to see in Zadar:

For Day trips from Zadar, try: