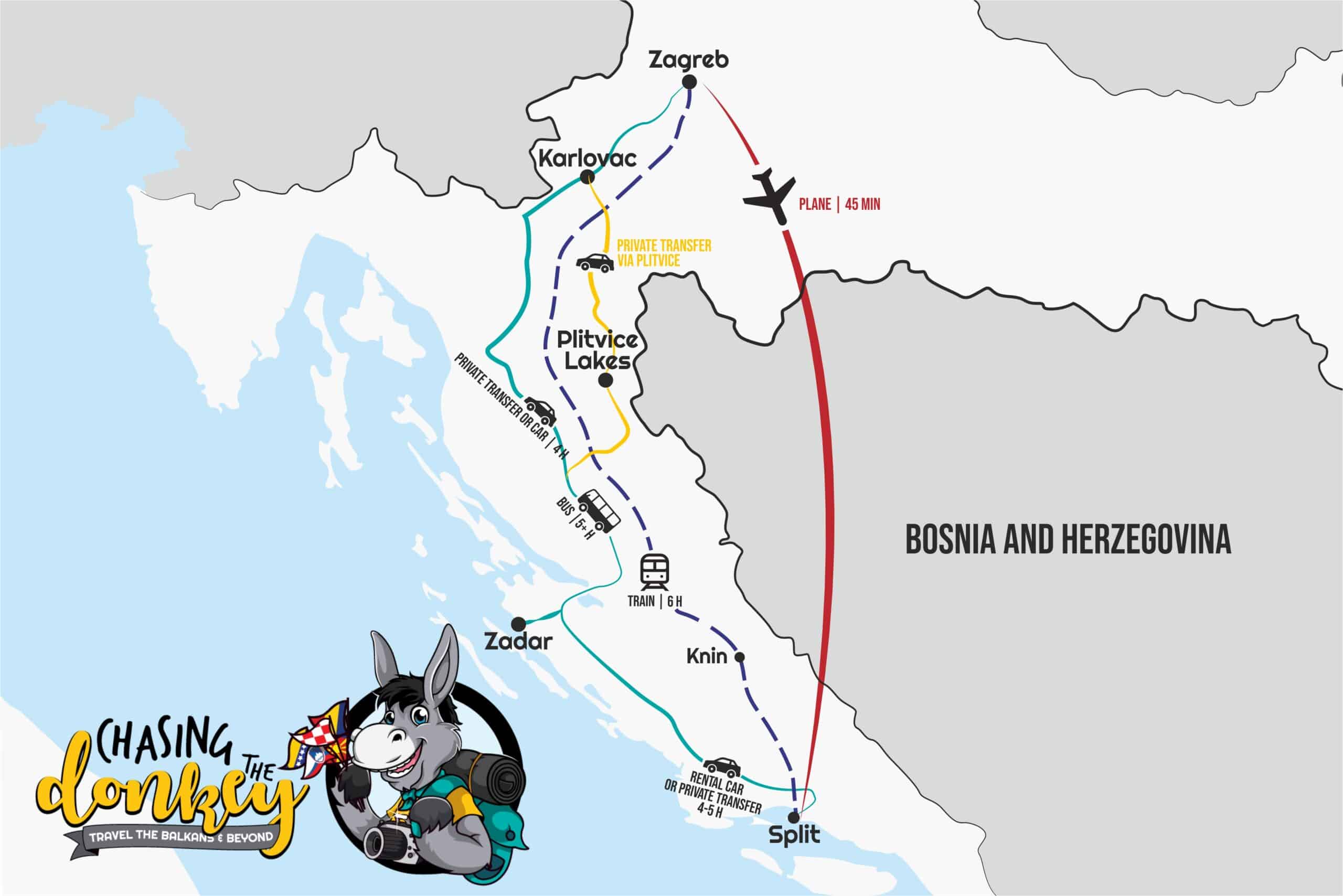 Zagreb is the capital of Croatia and has become increasingly popular over the last five years as the entry point into Croatia for holidaymakers. More recently, the city also won the award for best European Christmas market, meaning the city is truly magical during the Christmas holiday.

That aside, there are numerous things to do in Zagreb, such as shopping and nightlife, checking out the many cool and quirky museums, and enjoying the scenery. Zagreb is a lively spot, for sure.

Whether you’re flying into Zagreb, which is the main airport in Croatia, visiting Zagreb, or thinking about exploring Croatia beyond Zagreb, one of the most popular questions asked is how to get from Zagreb to Split and back again.

This is because these are without a doubt two of the most popular cities in Croatia. The great news? Travel from Zagreb to Split and from Split to Zagreb is easy, with travel times only taking just a few hours.

Let’s also not forget Split has a major ferry port, which will get you to the magnificent Croatian islands where so many spend their summers. Split, in other words, is the ideal place to base yourself for a Croatian holiday. Many people also ask how to get from Split to Zagreb via Plitvice Lakes, and that is easily done as it is along the route!

How exactly do you get from Zagreb to Split, and then how to get from Split to Zagreb?

We’re going to cover the primary modes of transport from Zagreb to Split.

How Far Is Zagreb From Split?

What is the distance from Zagreb to Split? This is a question many travelers ask when touring Croatia. The distance from Split to Zagreb is 408 kilometers. The route will take you from Croatia’s capital through continental Croatia to coastal Croatia through the Velebit Mountains.

The drive from Zagreb to Split will take you 4 hours along the A1, so it’s a good idea to make a couple of pit stops along the way, of which Plitvice Lakes is by far the most popular. Of course, you can choose to drive, take the bus, train, plane, or take a private transfer. Let’s check each option out, one by one.

Zagreb To Split By Car 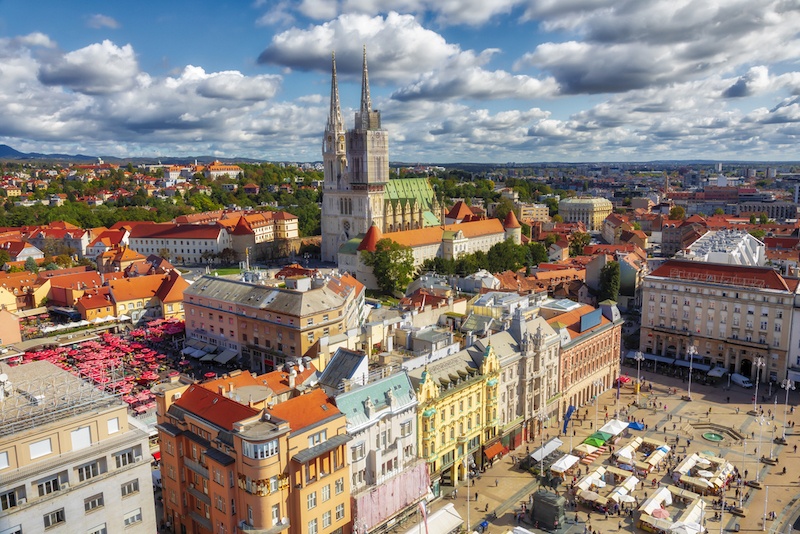 If you want to head off on your own steam and drive from Zagreb to Split or drive from Split to Zagreb, you can expect approximately a 4-hour drive, depending on traffic.

The Split to Zagreb drive is mostly a motorway along the A1, so pretty straightforward. Do bear in mind that motorways in Croatia are subject to tolls. A one-way toll fare between Zagreb and Split will cost you around the 200 Kuna mark.

All you need to do is leave Zagreb, enter the A1 motorway at Lucko and follow the signs all the way to Split. If there are any road closures along the way, which occasionally happens, there will be clearly marked diversions. These may add a little time to your journey, but it shouldn’t be excessive.

As an alternative, you can choose to go along the old highway between Zagreb and Split, which was in place before the motorway was built. This will take you longer because of speed restrictions, but it is a beautiful drive and is ideal if you have a bit more time and you’re not in a rush to arrive at your destination. Plus, you can incorporate some stops along the way like Karlovac, Rastoke, Plitvice, and Korenica.

There are many Zagreb car rental companies, as well as Split car rental companies, so that you can shop around for a great deal if you are opting to rent a car in Croatia. With the popularity of one-way travel,  if you’re not planning on heading back to Zagreb when making your way through Croatia, most will let you drop the vehicle off in Split, which is super convenient.

In summary, driving from Split to Zagreb is very easy, and you have two options available to you – Motorway and the old road.

The cheapest and probably easiest public transport option is to take the Zagreb Split bus. There are numerous (around 50) services throughout the day, serving the route every hour, including throughout the night. If you want to travel from Split to Zagreb by bus during the dark hours and arrive in the morning, you can take the night bus, which will give you a full day in Zagreb.

The night service takes about 9 hours as there are lots of stops along the way. The first Zagreb to Split bus of the day leaves at 5 am. The journey generally takes around 5-6 hours, depending on traffic. Remember to book your ticket ahead of time, as this is a very popular and busy route.

As far as the buses go, they are comfortable, and some have WiFi onboard, with regular bathroom breaks along the way. Prices vary according to the bus company you use, but they are 100-200 Kuna in general. Getting from Zagreb to Split by bus is definitely the cheapest way of traveling between Split and Zagreb.

Private Transfer From Zagreb To Split

If you want a totally hassle-free journey, then book a Zagreb to Split transfer or a Split to Zagreb transfer and take the stress out of the whole thing?

A private transfer from Split to Zagreb will pick you up at your Split Hotel (door to door service), take care of your luggage, and you’ll be whisked off in a new vehicle equipped with free wifi and bottled water. Along the way, feel free to make a couple of photo stops before your driver drops you off at your hotel in Zagreb.

Many travelers like to travel from Zagreb to Split via Plitvice Lakes or Krka National Park.  Plitvice is along the “old road” route, and it saves you having to backtrack to visit the National Parks once you are in Split. It’s actually much cheaper doing it this way.

The train from Zagreb to Split will take about 5 hours and cost you roughly the same as a bus, around 200 Kuna. The train from Split to Zagreb is actually very scenic, too. It’s just LONG – like, really long.

It is highly advised to book your train to Split from Zagreb ticket ahead of time. This is especially true from May to September when the volume of visitors is higher. For more information, check out the Croatian Railways website.

Flights between Zagreb and Split or flights from Split to Zagreb are your best option if you are short on time and need to get to Split or Zagreb in a jiffy. Flights are direct and take around 40 minutes, which is drastically quicker than any other option! There are downsides, however, namely the airport layover if you don’t have a reasonable connection.

Compared to other forms of public transport, the price is also much higher for a Split to Zagreb flight. Check out Croatia Airlines for Zagreb to Split flight schedules. Zagreb Airport is located around half an hour away from Zagreb, while Split Airport lies around 25 minutes away from the center and is easily accessible by bus and taxi.

Zagreb To Plitvice Lakes to Split

This UNESCO listed National Park and its 16 interconnected lakes and falls are simply spectacular. Those who decide to make the Plitvice Lakes stop also make a short stop at the watermill village of Rastoke, which is also along the route and well worth a visit.

If you want to travel from Zagreb to Split via Plitvice Lakes, your best options are:

Unfortunately, the only time and cost-effective option for a Zagreb to Split via Plitvice Lakes transfer is by using a private transfer service. All other options require public transport, and there are no one-way group tours currently operating this service.

If you would like a Split quote to Zagreb via Plitvice Lakes private transfer, contact Octopus Transfers Croatia.

What Sites Are There Between Zagreb And Split?

There are several interesting places you can make a stop when traveling from Zagreb to Split especially if you have a bit of time up your sleeve. We have already talked about Plitvice Lakes National Park, so here are a few more for you to consider:

You have a large number of options for travel from Split to Zagreb and Zagreb to Split. Together, they offer options that suit the budget and needs of all types of travelers.