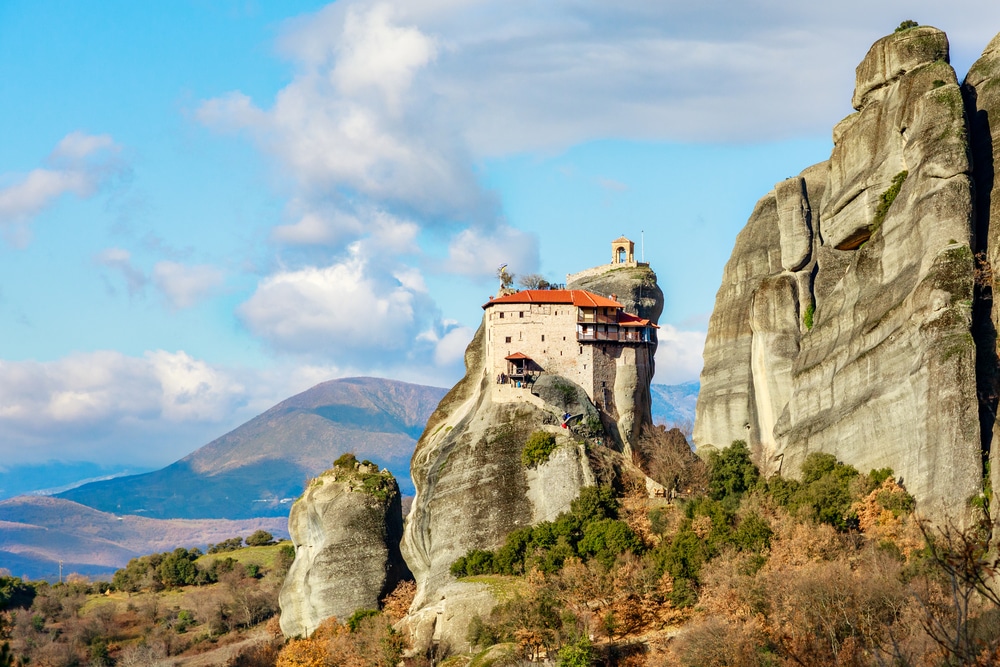 The worldwide famous Meteora is located near the imposing Pindos Moutain in Kalambaka, in continental Greece.

These famous monasteries in Greece stand among and on top of enormous dark rocks and give life to the second most important monastic community in Greece, after Mount Athos.

Its name was given by the founder of the Megalo Meteoro Monastery, Saint Athanasios Meteoritis, who gave the name of Meteoro to the huge rock where the monastery was then established. Meteora means high up in the air.

The following Meteora guide will help you answer questions like, is Meteora worth visiting?, which monasteries of Greece can you visit, how to get to Meteora monasteries, and more.

Things To Know About Meteora In Greece

Meteora is a complex of 30 different Byzantine monasteries, although only six of them are still functioning.

All the Meteora monasteries in Greece are living museums housing icons and other remarkable historical relics.

The whole Meteora complex is included on the list of UNESCO World Heritage Monuments. Hundreds of pilgrims visit Meteora all year round since the place is not hard to visit Meteora tours from Athens, the Greek capital.

How To Get To Meteora Monasteries From Athens

It’s possible to take a 1-day tour to Meteora by train, bus or car. However, it is also a valid idea to tour Meteora joining a trip departing from Athens. There are also tours from Halkidiki and Thessaloniki.

Getting To Meteora By Bus

To visit the imposing location, the first thing to do is to travel from Athens to Kalambaka. To do so, you will need to reach Trikala and, from there, catch another bus. People departing from Athens need to board the KTEL bus that departs from the Liosion bus station.

Getting To Meteora By Car

It’s also a great idea to visit Meteora with a rental car. The route to take is the National Greek Road Athina – Livadia – Lamia, following in the direction to Kalambaka.

Getting To Meteora By Train

This is probably the easiest and most beautiful way to visit Meteora. Trains depart from Athens, Thessaloniki, Larisa, Livadia, and Paleofarsalo. The closest train station is in Kalambaka and, from here, you can get to Meteora either by car or by taxi.

If you’re taking the train from Athens, remember that the Meteora trains depart from Larissa station.

Where To Stay In Meteora

Meteora can be an excellent day trip, but to get to know its best at a more relaxed pace, the best thing you can do is spend one or two nights in the area.

The following hotels have been divided according to different budgets for you to find the best place to stay in Meteora easily.

How To Get Around In Meteora

There are many alternative trips and tours you can book once you get to Meteora if you don’t want to rely on your own navigation skills to go from one monastery to the other on your own.

These organized tours take you to see the monasteries of Meteora Greece in a private car or minivan.

Some travelers choose to rent a car in the area, and it’s a great idea if you love adventure. Each monastery has a parking area close to the road, and it’s not hard to go from one monastery to the next by car.

Alternatively, it’s a good idea to rent a scooter in Kalambaka; however, keep in mind that many tourists choose this option, so book in advance in order to find the kind of vehicle you want.

Some pilgrims choose to hike or walk from the sites. In this case, try to devote at least three full days to your trip to do it at a more relaxed pace.

Monasteries To Visit In Meteora

Although there were many more monasteries open in the past, today you can visit six which are still standing and open to the public; the following Greece monasteries on cliffs are open and ready for you?

Some of them are smaller and others bigger, and they all have different visiting hours according to the season and the liturgical calendar.

The most remarkable ones are Great Meteoron and Varlaam, which are often the most visited and crowded. It’s a good idea to visit these two monasteries early to avoid crowds.

The Holy Monastery of Great Meteoron is one of the oldest Greek Orthodox monasteries in Meteora and the biggest of them all; it dates back to the 14th century, and once inside, you can also visit the museum and the main church.

Varlaam is the second biggest monastery in the area, and it dates back to the 14th century, it was founded by a monk named Varlaam, and he was the only one to live on the rock. Once he died, the monastery was abandoned until 1517.

The Holy Trinity Monastery Meteora also dates back to the 14th century and is not easy to access. The building is high up on a cliff, and you will need enough strength to hike up nearly 150 steps.

After checking the Holy Trinity, the following remaining monasteries to visit are Agios Nikolaos and Agios Stefanos.

The Monastery of Agios Nikolaos Anapafsas dates back to the 14th century and features ancient and beautiful frescoes.

Agios Stefanos is quite accessible. The monastery was built back in 1400 AD. The religious building was heavily damaged during WWII, but it has been restored and currently hots a nunnery.

When To Visit Meteora

The area can be sweltering in summer and relatively cold in winter; therefore, the best tie of the year to visit is spring (March-May) or fall (September-November).

Other than better weather, you’re bound to find fewer crowds too and better accommodation prices.

Meteora is full of stunning photo spots where to take the most memorable pictures of the high rocks and the monasteries.

One of the most popular places for pictures is known as Psaropetra, where sunsets are among the most beautiful in the whole region.

Also, close to Varlaam Monastery, there are breathtaking places to capture unique pictures of the high, dark rocks.

Day Trip From Thessaloniki To Meteora

If you’re visiting the northern Greek city of Thessaloniki, you’re probably wondering how to get to Meteora from Thessaloniki? It is possible to reach Kalambaka by train to see some of the Greek monasteries on a day trip.

You can either take this trip on your own or book a tour that includes the tickets and entrance to three of the six museums.

If you plan to visit all of them, it’s a good idea to spend the night in Kalambaka, since one day won’t be enough for all the sightseeing.

What To Wear At Meteora

First of all, you should remember to carry comfortable walking shoes, such as hiking boots in winter or hiking sandals in summer. Also, wear sunglasses and sunscreen lotion in summer.

As far as the clothes to wear, remember that the monasteries have a strict dress code. Women will need to wear a long skirt, dress, or sarong.

Don’t worry much, though; all the monasteries have wrap skirts that you can borrow at the entrance. Also, shoulders should be covered.

Men should wear long pants, although it can be possible to access the monasteries wearing pants that hit below the knee.