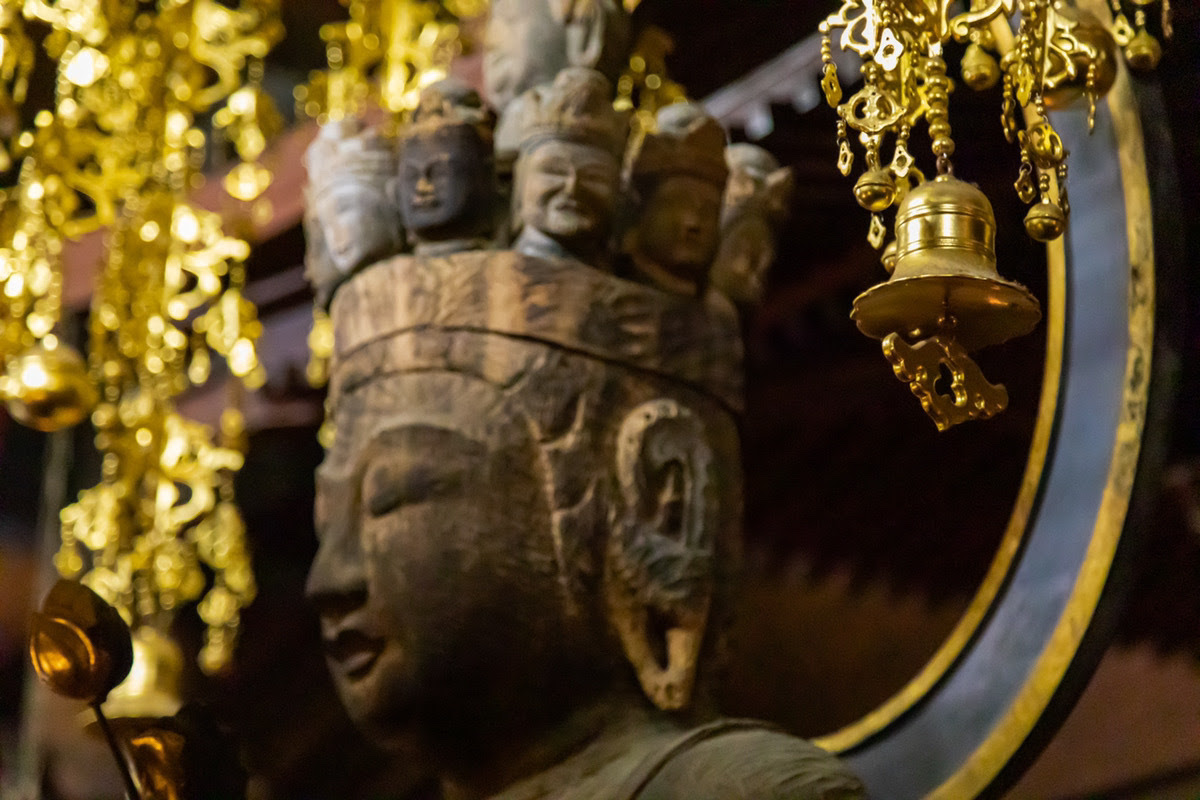 Onsenji Temple stands on the western end of Kinosaki along a mountain slope, away from streets embellished by the click-clack of geta sandals. According to Dochi Shonin, the Buddhist saint who founded Kinosaki Onsen, this temple was initially opened in 738 AD. Since its opening, it has shared a millennia-long history alongside the town. The temple not only acts as a place for devotion but is also said to provide prosperity for the onsen’s gushing spring water.

Legend has it that Dochi Shonin desired to cure humanity of suffering and, upon arriving in this area, resolved to pray for 1000 consecutive days. His prayers were answered, and water suddenly rushed from the ground. Thoroughly inspired by this miracle, Onsenji Temple and Kinosaki Onsen were both opened.

Onsenji Temple is notable not only for its history but for what’s enshrined as well. At the center of the temple’s inner sanctuary stands its principal statue, juichimen kanzeon bosatsu (Eleven-Headed Bodhisattva of Compassion and Mercy). This figure was made 1,300 years ago and has been designated an Important Cultural Property by the nation. Additionally, the principal statue’s hands are tied with five different colored threads known as the “Strings of Virtue” (zen no tsuna). By touching these threads, you can directly connect your whole being with the universe, thus tightly tying your fate together. The strings even extend down to the bottom of the mountain for visitors who cannot make the trek up to the temple.

Ordinarily, this statue is hidden away in an altar case and is only visible to the public for 3 years at a time every 33 years. The statue is currently on display from 2018 to 2021. This is the last year for people to see the statue for another three decades, and it will only remain displayed until October 31st! This is a rare opportunity, as most people only have the chance to see it a maximum of 2 or 3 times during their lifetime.

There is even a wooden ladle that one can get from Onsenji Temple to “prove” one’s visit. Historically, visitors would not be allowed to enter the waters before paying their respects at the temple. They would then receive a “yu-shaku,” or hot spring ladle that would serve as an entry ticket to the hot springs. Today the ladle is not needed but can still be purchased at Onsenji Temple. In this way, too, the temple and town are symbolically intertwined.
Onsenji Temple is cherished by residents and visitors to Kinosaki and has become the centerpiece for various holidays. Perhaps the most distinct of these holidays is the Kinosaki Onsen Festival held in spring.

This period coincides with a memorial service immortalizing the memory of founder Dochi Shonin on the anniversary of his death. Alongside this solemn ceremony, the rest of the town celebrates the Onsen Festival to express its gratitude to the onsen. The monks of Onsenji have a procession through the streets, visiting each public bath to offer their blessings. There is a mochi-throwing tradition, and the rare principal statue at the temple is partly shown to the public. In the evening, food and game stalls are set up along the Otanigawa River, and a stage is placed in the center of town for performances.

Visit Kinosaki had the opportunity to interview the head monk at Onsenji Temple, Yusho Ogawa, who had the following to say about the statue’s unveiling period:

“It is clear that the Kannon statue possesses some kind of power. Since its unveiling, it has been visited by The New York Times and other famous media and television crews. It has had many unexpectedly amazing encounters with people who do not normally come to the temple. There is a fair amount of local people who frequently come, too, and those people feel an extremely tight bond with the statue.

I have only been able to see the standing statue twice in my entire life, and the first time was when I was in elementary school, so the emotions I am experiencing now are quite different. There are many taxing daily tasks that I must do for the three-year period since I need to make sure the statue is protected.

However, I think that I will feel quite sad once it comes time to shield the statue once again because the distinctiveness of this special period will be over. I am thankful for the onsen – for all of it – because the statue has continued to serve Kinosaki for the past 1,300 years.”

**These photographs were taken before the COVID-19 pandemic. Outside activities have been canceled for the festival but will return once the population is vaccinated and case numbers are stabilized.