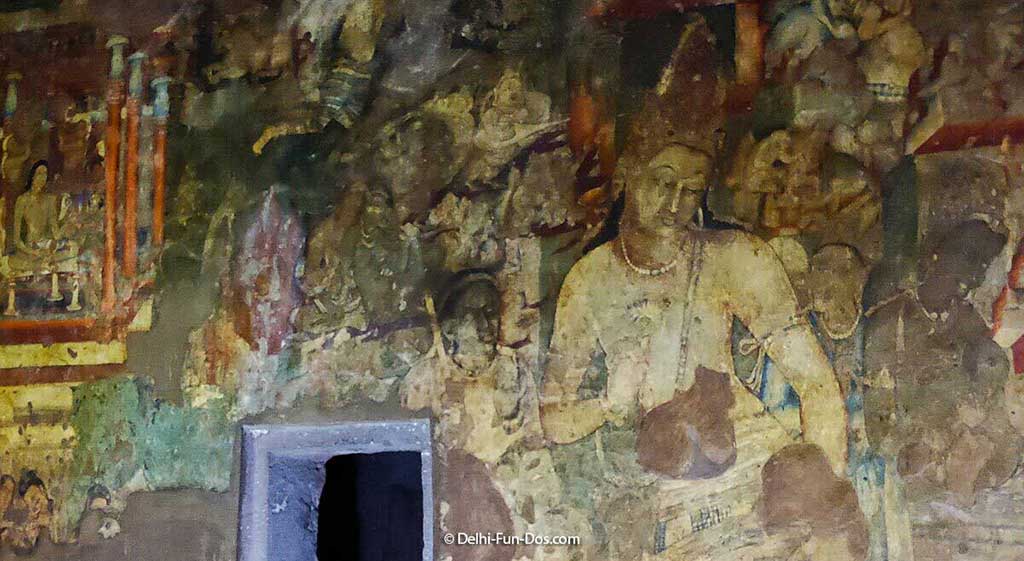 
Ajanta Caves in Maharashtra has been on our travel bucket list forever but were not being able to make time. But patience brings good things they say. We finally visited Ajanta and Ellora Caves earlier this year. Our experience was overwhelming and months after the visit, we still pinch ourselves to check if our tour was real. There is so much to absorb here and a few more visits may perhaps do justice to our understanding of the magic called Ajanta.  Yet we thought about recording a selection of experiences from Ajanta through short pieces.  To this end, this is the first among our series of posts about Ajanta Caves.

The first world heritage site in India is the Ajanta Caves. Ajanta Caves, world heritage site, made it to the UNESCO list in the year 1983 along with Agra Fort. It is estimated that the first phase of Ajanta caves was built during the period of Satvahana rule in the 2nd century BCE to 1st century CE. The second phase was built many centuries later during the 4th to 5th century CE. Ajanta comprises a series of caves that depict, through gorgeous paintings, tales of Jataka or the pre-birth of Buddha, and also stories of Buddha’s lives. Some of the caves do not have paintings but have detailed carvings based on the life of Buddha with a central Stupa for worship.

Cave 1 of Ajanta was built in the second phase of excavation under the patronage of King Harisena of the Vakataka dynasty. It is perhaps called Cave no. 1, not because of antiquity, but because it is the first cave that a visitor comes across when they enter the Ajanta complex. Cave 1 is a huge gallery-like space in a cave that was, as per researchers, to serve as a temple to Lord Buddha and meditation hall for monks. In fact, the outside portico has elaborate carvings of monks in meditation, dancing girls and animals. But it does not quite prepare you for the splendour inside that was created with very basic tools about 2000 years ago.

Once we entered the cave, we were temporarily blinded with the extreme darkness. In a while, our eyes got adjusted but we wondered how artists could have created these exquisitely detailed paintings, aeons ago, in almost no light. The darkness has been a boon for this cave. Given the lack of sunlight, the paintings have been minimally exposed and that could be the reason why the paintings are largely preserved here even after, please forgive the repetition, 2000 years!

The themes of the paintings in this cave are tales of Jataka and depiction of Buddha’s prior lives when he was in quest of enlightenment as a Bodhisattva. Our guide had an approved torch and he showed us the paintings on the walls and the ceilings. He stopped longer to describe stories associated with the more important paintings. The paintings were bright yet soothing. The proportions were just perfect. The facial expression of the most insignificant character had also been assayed meticulously. The smile, the frown, the sorrow, the worry…the little faces had it all. The eye for details did not stop there. The elaborate clothing and ornaments were correct to the last fold of the loincloth or pearl drop in rings, necklaces, belts and anklets. The footwear mostly resembled our modern-day sandals. The ceilings were also richly painted. However, the ceiling paintings do not carry stories but were images of animals, flowers or geometric patterns.

Padmapani is a Bodhisattva or someone who is on the path of enlightenment or becoming a Buddha.  He is the epitome of compassion and is a popular character in Buddhist iconography. In Indian illustrations, he holds the Padma or the lotus flower thus being called Padmapani or the “One who holds a lotus in his hand”. The Sanskrit word “pani” means hand.

Vajrapani is a Bodhisattva who is known to be the protector.  He holds a thunderbolt or the Vajra in his right hand and is thus called Vajrapani or the “One who holds the thunder in his hand”.

At the far end of cave 1 is a room, like a sanctum sanctorum, is a small compartment. A peaceful statue of Lord Buddha in sitting position, hands in Dharmachakra Mudra, symbolizing his first sermon after attaining enlightenment, virtually illuminates the whole cave from here. Painted on two sides of this chamber are two huge sized figures that seamlessly draw attention.

On the left wall is the painting of Padmapani. Not only us but also most visitors we observed automatically stopped for some time in front of this image, somewhat transfixed. For us, this was a dream come true. We wanted to devour as much as we could with our eyes.

The first thing that we observed was the lotus shaped half-closed eyes. Looking downwards, the eyes were full of compassion and oozed a certain detachment, notwithstanding the rich garb and jewels he was in. The perfect body had very long arms, as is the mark of a great man in Indian religious iconography. Near his chest, he was holding a lotus flower in his right hand. Every item of clothing and accessories, such as the elaborate crown, the belt and loincloth oozed certain, in search of a better expression, divine glamour. Yet, what stays with us is his lost look. Amidst all this glory, Padmapani had pathos in his expression, as if he was there amid all these riches and yet…lost in a mind space of his own. Like his quest is not over and he has not found the answers.

On the right wall is the painting of Vajrapani. The Vajrapani painting is in perfect physical proportion. The facial features like the eyes, chiselled nose and full lips depict a sense of strength and regal confidence that befits the protector. Vajrapani too is clad in royal clothes and jewels. His elaborate crown deserves special mention. The detail painting depicts a complex honeycomb kind of design not leaving out strands of pearls and chain in the crown that could inspire any modern designer. You just can’t miss that. The skill of the artists filled us with awe and gave us goosebumps many times during the day.

These paintings kind of had magnetic power. While cave 1 was our first stop in Ajanta, at day end, we walked back the whole distance to cave 1 for a final look of Padmapani and Vajrapani.

How to reach Ajanta Caves from Delhi

Ajanta and Ellora are extremely well connected with rest of India. We flew from Delhi to Aurangabad, the nearest city and airport. Ajanta is 100 km from Aurangabad. The road between Ajanta and Aurangabad is under repair so it took us about 3 hours by car to cover 100 km. Aurangabad also has a busy railway station and many trains stop here. Ajanta can be covered by road from Mumbai or Pune.

Given the ease of reaching Ajanta and Ellora, we went on wondering, why we waited for so many years for visiting this marvel.

It has been some months and the trip now seems surreal. The eyes of Padmapani still follow us. They are full of compassion and kindness. Yet they have a certain sensual appeal. Padmapani and Vajrapani stand in gorgeous attire. Yet, in their eyes and body language, there is a sense of detachment from the surroundings. These paintings depict a certain co-existence of materialism, sensuality and spirituality, which, only after we saw Padmapani and Vajrapani paintings in Ajanta, seems possible.