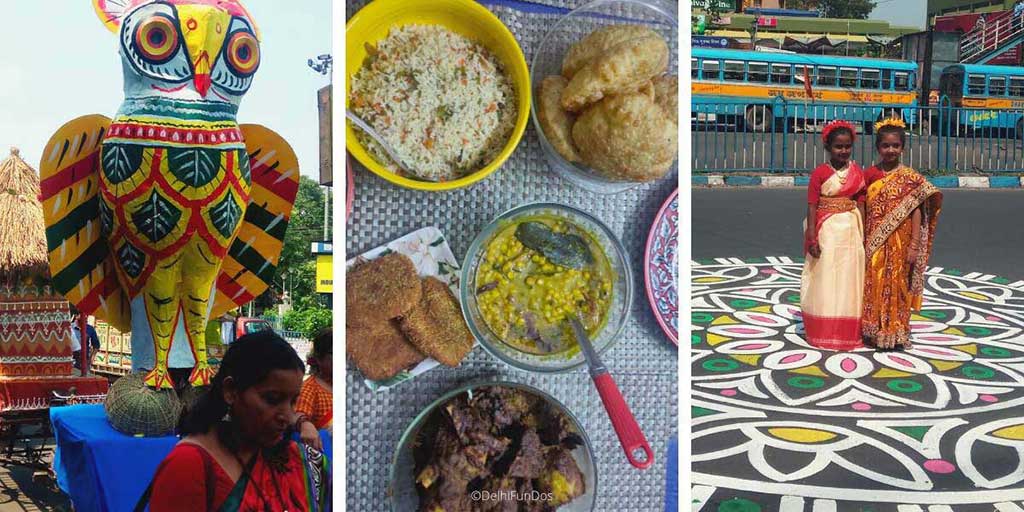 
What is an example of cultural tourism? The answer my friend is India. You travel around in India and you realise that there is just so much you don’t know about the country.

For example, India celebrates multiple New Years across various states of the country. Many of the regional years commence in the second week of April. It is Vaisakhi in Punjab, Ugadi in Andhra Pradesh, Bohag Bihu in Assam, Puthandu in Tamil Nadu, Vishu in Kerala. The list is endless. Each celebration has its unique character. The distinctiveness of the regional New Year festivals is that people of the state partake in the festivities irrespective of their religion.

Vaisakhi falls on 13th or 14th April of the Gregorian calendar every year. One day after Vaisakhi, Bengalis celebrate Nababarsho or the Bengali New Year. The year starts on the first day of the month of Baisakh and hence the festival is also called Poila Baisakh (Poila means first). We happen to be in Kolkata a year back and enjoyed the festivities first hand.

Legend has it that the Bengali New Year was started under Emperor Akbar’s reign. Akbar was facing difficulties in collecting taxes as per the lunar Islamic Hijri calendar. To bring the calendar in parity with Bengal’s harvesting season, when people would have the means to pay taxes, he engaged astronomers. They came up with the solar calendar or “Bangabdo” (Bengali era) with Poila Baisakh as the first day.

Another school of thought says that to advance Akbar’s secular philosophy of Din-i-Illahi, he created the Bengali New Year “Bangabdo” that is a fusion of the Islamic lunar calendar and the Hindu solar calendar.

The jury is still not out on this. But that does not deter the Bengalis from having a gala celebration every year.

How is Poila Baisakh celebrated?

We happened to be in Kolkata on Naboborsho, or Poila Boisakh and spent the day amidst music, dance, new clothes and a lot of food. Although it was the beginning of summer, people did not mind the sweat and were out on the street in celebration. We took some photos, videos and notes for creating this post.

It appears that people shop and gift new clothes before almost every festival in West Bengal. Poila Baishakh, being the New Year, is the forerunner. People buy basic garments such as home wear during Poila Baisakh, perhaps in view of the hot and humid weather after this festival. They keep the elaborate shopping for Durga Puja.

On the morning of Poila Baiskah, we found people dressed in crisp clothes pottering around with boxes and handis (pots) of sweets. Men were dressed in khadi or cotton payjama-panjabi (kurta – pajama). Some wore dhotis as well. Women looked stately in handloom cotton saris and big bindis. Little boys and girls wore simple clothes although some little missies looked special in their mini-saris. One look around and bright faces in new clothes set the mood of the day.

Music and dance on Poila Baisakh

Like anything Bengali, the day was celebrated with songs, dance and alpona art right in the middle of a busy road. We could hear the singing from our homes and quickly changed into kurta-pajama so as to fit in.

Once we walked to the main road, we saw a beautiful procession with colourful tableaus and crafty cut-outs. There was a make shift stage and a trained singer would get up and start a song. People standing around would join in and some would form a circle and do a dance that is very different from what we see at a party in Delhi. It was more like the folk dances we saw at Khoaier Haat in Shantiniketan.

Some people also recited poetry by Rabindranath Tagore and other Bengali poets while others listened. The crowd kept changing and passersby would also join, greet people around them, sing along and take pictures.

Sweets and food on Poila Boishakh

What is a festival without a feast? We had multi-course meals with luchi, chholar dal, polao, fish and mangsho or red meat curry followed by the palette cleanser chutney. Raw-mango or aam-pora sherbet was the beverage of the day. Mishti doi (Bengali sweet yoghurt) was for dessert. And also countless sweets at all times during the day.

Do note, if you visit a Bengali friend in this season, you would be served a number of sweets such as sandesh, roshogolla and chomchom. Not great for calories but works wonders for the soul!

This would also be the start of the annual Bengali book of accounts or Haal Khata. Hence businesses in Bengal celebrated the day with Lakshmi Ganesh Puja. The prayers would be held in the office or shop premises. Alternatively, people would carry Lakshmi-Ganesh idols to famous temples like Dakshineshwar Kali Mandir, or Kalighat or neighbourhood temples and get the Puja done.

We saw people greet each other “Shubho Naboborsho” on the streets. The greeting was meant for friends, neighbours, acquaintances and even the random chap on the road. Younger people would touch the feet of elders and seek blessings. People would visit each other’s homes, especially meet senior relatives and seek blessings for the New Year. And of course, they would carry a box of sweets while visiting someone.

This was the sweetest part of the festival.

Poila Boishakh is a major festival in Bangladesh. People in colourful clothes, and women wearing elaborate hairstyle with flowers, would assemble on streets. They would join in the processions, the music and dance and general merry-making. The standard Poila Baishakh meal in Bangaldesh in Panta Bhaat (soaked left-over rice) and Shutki Maachh (spicy dried fish curry). Community lunch arrangements would serve these dishes.

What does Pohela Boishakh signify?

The Bengali New Year is not just a symbolic celebration. The Bengali almanac or Panjika is published based on this calendar. This is the go-to book in many Bengali households for tracking festivals and observances. In fact, Bedabrata’s grandmother, not too long ago, would name a timeframe based on the Bengali month.

More important, not so much in cities, but in rural Bengal, most businesses ran on the Bengali calendar. This is actually the commencement of the bookkeeping year in Bengali villages.

It was a little surprising when we realised that the Bengali New Year still held substantial significance in the state. No matter whether one celebrated Poila Boishakh, the Bengali calendar was still an important aspect of Bengali life.

What is the current Bengali year?

This is a rather quizzical situation, a question that would leave many Bengalis guessing.

To the clear the air, Bengali New Year or Bangabdo 1428 commenced on 15th April 2021and will run till 14th April 2022.
Bengali New Year celebrations are a simple and colourful celebration. Not having a religious connotation, this was inclusive and joyousness spread among one and all. While on the road, we did not know too many people around us. Yet that did not deter us to participate in the fun and frolic, the music and dance and the great day long food-trip. What more can we want from a festival?

Shubho Naboborsho to all.