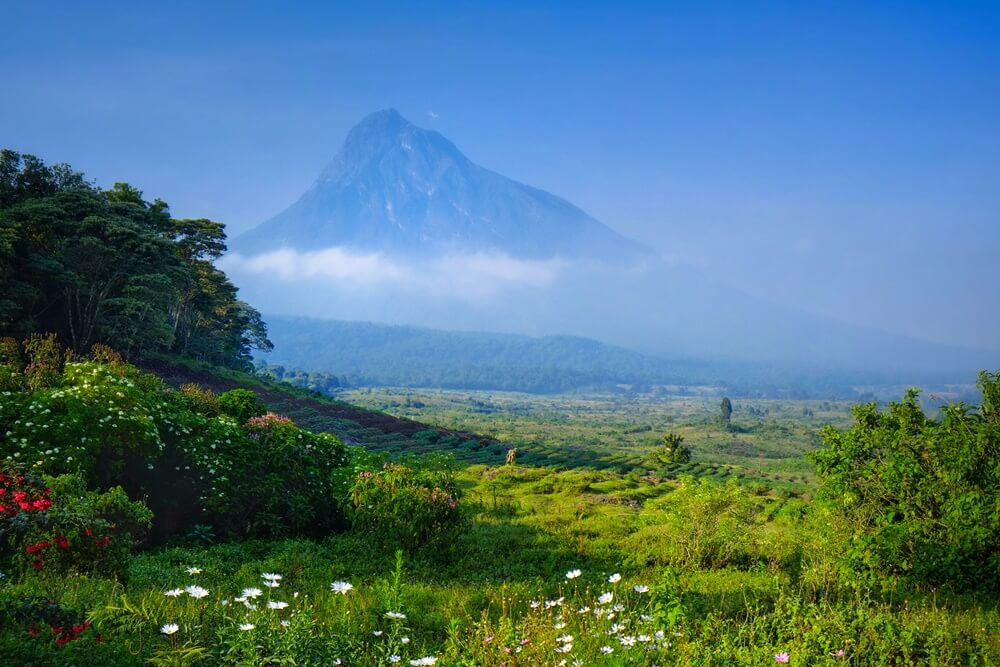 
I haven’t been to Africa yet, so I welcomed this post about protecting the mountain gorilla. There is so much I need to know about animal tourism in that continent, and I’m glad this article could provide some info on such an important subject.

The mountain gorilla, scientifically known as gorilla beringei beringei, is among the inhabitants of the Bwindi National Park in Uganda and the Virunga ranges.

The World Wide Fund (WWF) reported that no more than 1,000 mountain gorillas are currently out in the wild; they have no records of survival in captivity. Majority of this population resides in the Bwindi Forest National Park and Mgahinga Gorilla Park, while the remaining apes can be found in the Virunga National Park and Volcanoes National Park.

During the latter part of the 1980s, the population of the mountain gorilla drastically decreased to only a total of around 330 across the globe as a result of intense poaching in the Virunga Volcanoes Range, most popularly known as Virunga Massif. It was also around this time that Dian Fossey, an American zoologist and a gorilla advocate, was brutally murdered while in a camp in the Virunga Mountains.

However, Fossey’s death opened up to a whole new world of survival opportunities for the mountain gorillas as the news gained publicity and spread awareness among the nations. A lot of the conservation bodies intensified their programs, and more funding came in for the boosting of the gorilla population.

Among the major contributors to these efforts are the Gorilla Doctors, the African Wildlife Foundation (AWF), and the WWF, to name a few. On top of that, aids from the governments across the globe also came, along with efforts from some local communities who were more than willing to save the gorillas from possible extinction.

More programs were launched to raise public awareness. People started devising methods to restrict poaching, and even the government officials and locals did their parts in securing the future of the mountain gorilla.

Gorilla safaris and national parks eventually started surfacing, allowing the whole world to experience the benefits of keeping these mountain gorillas alive and well. The public then began appreciating the mountain gorillas’ value and began chipping in the fight for their survival, making the conservationists’ work easier and a lot more fruitful.

In 2008, 10 member countries finally signed the Gorilla Agreement, together with the conservation bodies, governments, and the local communities around the gorillas’ habitat.

Currently, the mountain gorillas are quite away from the edge of extinction and are increasing in population over the years. Despite this fact, continuous promotion of their conservation is still a must. Here are five ways we can secure the future of these beloved gorillas.

Support the Local Communities in Africa

Residences and the villages around the gorilla national parks largely contribute to the success of the gorilla conservation in those areas.

Even before the signing of the Gorilla Agreement, locals living near the gorillas’ habitats struggle to live in harmony with the animals, creating various conflicts over the years. Thankfully, the efforts of conservationists to spread awareness among the communities started to pay off. The locals began seeing the value of these animals, and conflicts eventually decreased.

To help promote gorilla conservation, you can freely donate to the development projects of these communities to help them find alternative resources for their livelihood.

A handful of former gorilla poachers have also been educated on gorilla preservation and eventually joined in on the conservation program. You can hire their services to support them financially and provide them with a means of livelihood that connects them to the value of gorillas.

To implement strict preservation of the gorillas, the three countries where the mountain gorillas are located put up a set of rules and guidelines to keep the species away from human diseases and stress.

One of these rules is maintaining a “safe distance” of seven meters away from the animals while you are in the park. You are also not allowed inside when you are sick to prevent possible infections to the gorillas.

The parks strictly minimize the number of people that can track a specific gorilla family for the day. Only a total of eight individuals are allowed to do so. This is to lessen the human interaction the animals experience in a day, thereby minimizing any stress-related incidents on the gorillas and conserving their habitat as well. (This is how responsible tourism is done!)

The conservation bodies spearheading the gorilla preservation accepts any amount of donation from the public. These organizations include the Gorilla Doctors, AWF, and WWF, among others.

They usually organize the conservation programs in most of the gorilla national parks, providing medical care and assistance to the animals and supporting the development of the local communities as well.

Feel free to visit their websites to know where to give your donations to help these gentle giants.

Although the gorilla poachers have lessened over the years, there is still a handful of them hunting in the gorilla parks for other wild animals such as antelope, elephants, and buffaloes.

The traps set out for the animals are highly likely to catch gorillas as well. While the other animals are mostly hunted for meat, some of the poachers also made use of their skin, bones, and ivory to sell as souvenirs to tourists.

Never patronize these kinds of products to stop these poachers from disturbing the natural habitat of the gorillas and end the threat to the other animals’ welfare as well.

Since the war for gorilla conservation, the gorilla habitats became one of the most popular tourist destinations in Africa, resulting in the inclusion of products like the 3 days gorilla trekking safari and other packages in a lot of tour companies’ itineraries.

Before you are allowed to track the gorillas, a gorilla tracking permit is required in any of the three countries sheltering the mountain gorillas. A portion of the fees is given to the gorilla conservation programs and the development of the local community as part of their respective revenue sharing programs. Thus, when you purchase a gorilla tour package, you are also chipping in on the fund for the gorillas’ future.

These are only five of the ways to lend our hand in the gorilla conservation and doing one or all of them can largely contribute to the preservation of the mountain gorilla species. Let us all join hands in securing these gentle giants’ future and guaranteeing a thriving and healthy habitat for these creatures.

The conservation, protection, and support for mountain gorillas are matters that are taken seriously. For instance, gorilla trekking has been made into a form of activity that aims to effectively contribute to the said matter.

Gorilla trekking tours inform people about the importance of mountain gorillas and cut down the major risks or threats to gorilla tourism. These treks require keen attention to rules and follow specific guidelines to ensure everyone’s safety.

If you’re a beginner and anxious about your safety, don’t be! Here are some tips to maximize enjoyment of your trek.

The first thing you need to remember is to never go against your trek guide’s directions. The guides are locals and experts in gorilla behaviors. They know the do’s and don’ts of gorilla trekking.

Listen to their instructions to avoid any potential dangers while you are out in the wild.

Stick to your group

Gorilla trekking sessions are usually done by groups. See to it that you remain close to your group at all times to increase everyone’s protection and safety rate.

As much as you want to go wander by yourself, please do not. Wandering alone can put you in danger, or worse, risk endangering the rest of the group. Only go on the path of the group and avoid looking for gorillas alone.

Observe silence in the presence of mountain gorillas

Avoid making loud noises when you’re in an area near gorillas. Loud sounds can annoy the animals and make their behavior unpredictable. Loud noises can also make them feel threatened; it might seem like a challenge to them and may lead them to attack you.

Do not use flash photography

Flash photography is prohibited during gorilla treks. As much as possible, avoid taking photos closely and never forget to turn off your flash. It can irritate them and trigger them to attack you.

Before you go on a gorilla trekking safari, thoroughly check if you have all essentials packed in your bag. Clueless on what you should bring? No worries! Here is a list of packing essentials for your long-awaited gorilla trek.

Gorilla Permit — The Gorilla Permit is the number 1 requirement of all gorilla trekking tours. Make sure you have one ahead of your actual trek date because without it, you won’t be allowed to do the trek.

Hiking Boots — To properly track the mountain gorillas, you need proper footwear. The trails are often become muddy during the rainy season, making it slippery. Wear heavy duty hiking boots that are also waterproof. As much as possible, avoid wearing sneakers, flip flops, or sandals if you’re planning to go on a mountain gorilla trip.

Waterproof Backpack — Waterproof backpacks or day packs are the best options for gorilla treks. They are an all-around type of storage that you can use anywhere and anytime. There are several types; check it out on Amazon.

Light and Long Pants, Jackets, and Long-Sleeved Shirts — Wear light and long clothing that can help protect you from insect bites and other dangers of trekking in the mountains.

Water and Energy Bars — Bring water and energy bars to help you during the trek. Most packages, like the Rwanda tours, include full board accommodation, but it would still be good for you to be prepared.

First Aid Kit — One of the most crucial things that you should never forget to bring is a first aid kit. It is advisable for every travelers and adventurer to carry this as a safety precaution.

Safari Gadgets — Safari gadgets are extremely useful to help you enjoy the trek more. Some examples include a pair of binoculars and cameras with long lenses. Of course, you can still enjoy your gorilla trek without these, but seeing the gorillas up close through is an experience like no other.

Seeing a mountain gorilla in the wild is definitely a bucket list item for a lot of travelers. Keep their protection and preservation in mind when you go on a safari, and you will ensure that future generations will still get to see them someday.

Have you been on a gorilla trek? Where did you and how was your experience?

Elena is a professional writer based in Sacramento, CA. She graduated with a BA in Marketing, took a gap year to travel around the world (95 countries so far! Yay!), and finally settled down to put up her own digital business. She loves surfing, Crossfit, Keanu Reeves, and cats.