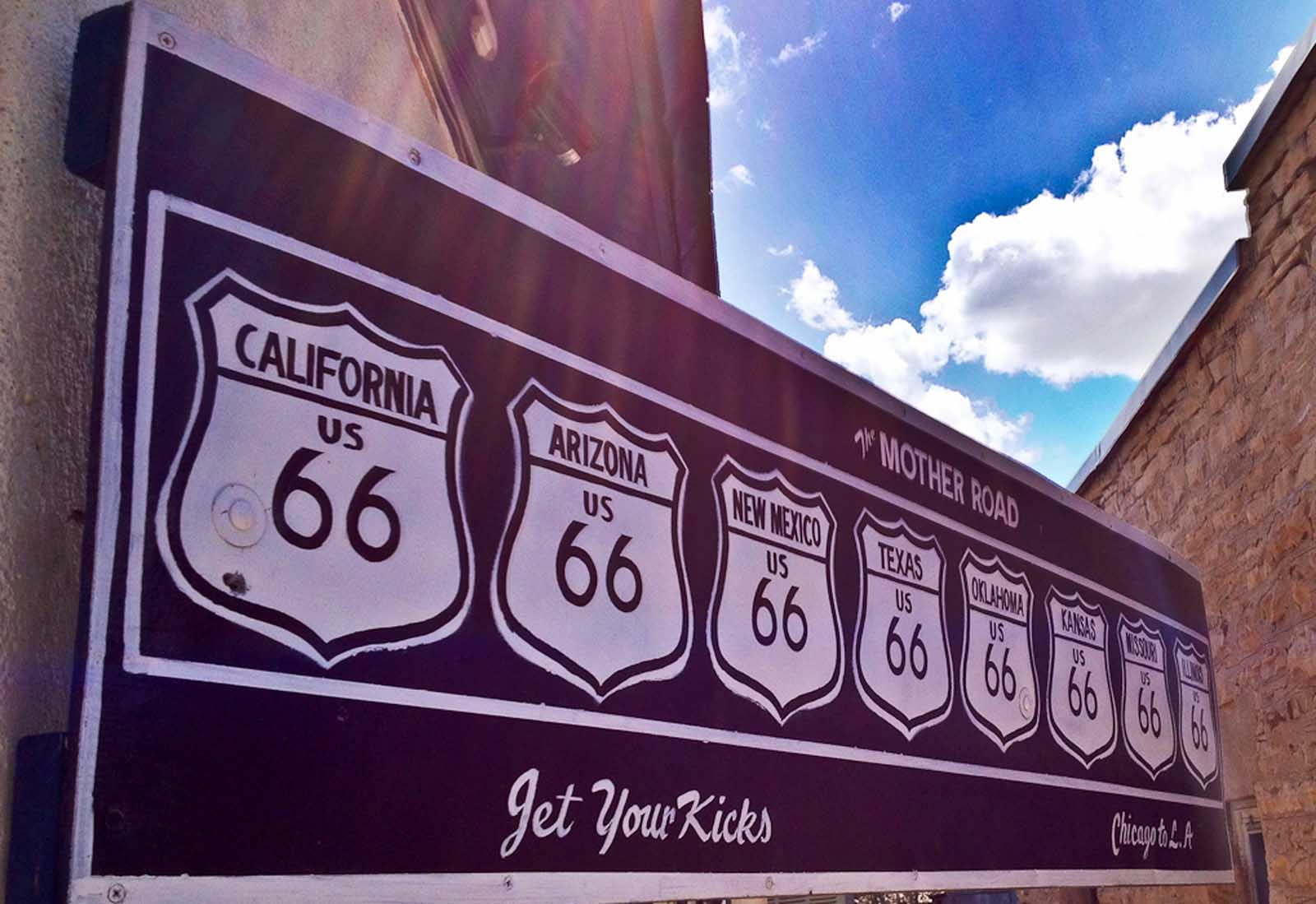 
I must admit, I felt giddy hopping on the legendary Route 66. Known as The Mother Road and the Main Street of America, Route 66 was the main thoroughfare through the United States for decades. I had listened to Nat King Cole’s velvet voice sing about it for years and had visions of drive-in diners, neon lights and vintage cars lining the route. That song had a lasting impression.

Get Your Kicks On Route 66

Be sure to get your road trip playlist ready and make sure you have a little Nat King Cole on there to hear the smooth jazz while you drive the open road.

“If you ever plan to motor west
Travel my way, the highway that’s the best.
Get Your Kicks, on Route 66“

Route 66 spanned across America from Chicago, Illinois to Santa Monica, California. Built in 1926, Route 66 was a road of dreams passing through eight states. During World War II soldiers and military vehicles used this road extensively as it was the most direct route through the country. After the war, and during the Great Depression, Route 66 was filled with people dreaming of a better life in the West. Families also flocked to route 66 to take their summer vacations to see the Grand Canyon and other iconic sites in California and Arizona.

This was a busy and exciting route through America. Those days are long gone and today, the 3940 km (2448 miles) route is a shadow of its former self with only pockets still clinging to a bygone era.

What Happened to Route 66

Why did Route 66 crumble? In the 1980’s, the highway system was built bypassing most of the towns located along the route. With tourists driving directly to the tourist attractions of Arizona and California fast and efficiently on Interstates instead of the slow backroads of Route 66, most towns along Route 66 fell into disarray. But over the years, some began to rebuild and pockets of nostalgia have cropped up throughout the route. The allure of the road trip still holds strong and it is at the top of many people’s bucket lists to take this driving tour across America.

You can drive the entire route 66 and it will take about 2 weeks (three weeks if you really want to take your time) to do so. But you can do portions of Route 66 as well. There are many portions that you can drive. As we said, route 66 passes through 8 states with plenty to explore in each. If you are driving west like the Nat King Cole song, you’ll start in Illinois, Missouri, Kansas, Oklahoma, Texas, New Mexico, Arizona and finally California.

Things To See On Route 66

Car rentals can be booked one way if you don’t have your own. So there is no excuse not to drive this historic highway if you find yourself in America. (Or at least a portion or two). Since it spans across America, there’s a good chance you will be somewhere close to Route 66 during your United States travels.

Arizona has a lot of Route 66 Attractions that are well preserved. See our full Arizona Road Trip

The final stop on the great American road trip. This is where dreamers ended their trip in search of the American Dream. Some of the sites to see that are specific to Route 66 in California are.

As Americans migrated west looking for work, it captured the imagination of the nation. Luckily, a lot of the signs and memorabilia have been preserved. One of the best things about driving Route 66 is to drive with no plans.

Go with the flow and stop when you see something nostalgic or historic. You’ll find a lot of roadside attractions along the route and as tourists and Americans travel more to revisit a simpler past, more attractions are opening up.

All along the route from Chicago to California towns cling to a not so distant past and a few tourists who set out to recreate their own American Dream by driving along the iconic route making it the ultimate road trip.

The towns that were bypassed by the Interstates refuse to quit and attract visitors from around the world wanting to catch a glimpse of America’s glory days.

There are old cars on display, a soda shop and 50’s style gas stations, a colourful downtown and of course Route 66 signs and leftover ads from its heyday.

There are old motor hotels, The Road Kill Cafe, a Texaco Gas Station and the old general store. If you are going to buy any souvenirs, buy them in Seligman because they have everything Route 66.

It really is an amazing journey. The picturesque landscape with cows grazing in the distance and rolling hills surrounding our lonely stretch of road takes you back to a time when people didn’t stare at their phones and when family was first and foremost.

It’s not easy to navigate Route 66 with just Google Maps but there are apps and guide books to help you out.

It’s nice to have that extra security because at times, we felt completely isolated. There were moments where we barely saw another car on the route. We drove it at the end of summer during shoulder season so that may be the case. We often we wondered if we had taken a wrong turn, but luckily, quirky signs would always pop up to let us know we were going in the right directly.

My favourite were the ads for Burma Shave. These quirky signs lined up in groups of five told a little tale with a silly punchline at the end, punctuated by a final sign advertising “Burma Shave”

A lot of times you’ll come across run down buildings and ghost towns. If it can’t attract tourists, towns completely shut down.

We loved driving Route 66. There has never been a better time to take a road trip across America. While people plan on staying closer to home, this is a great places to start.