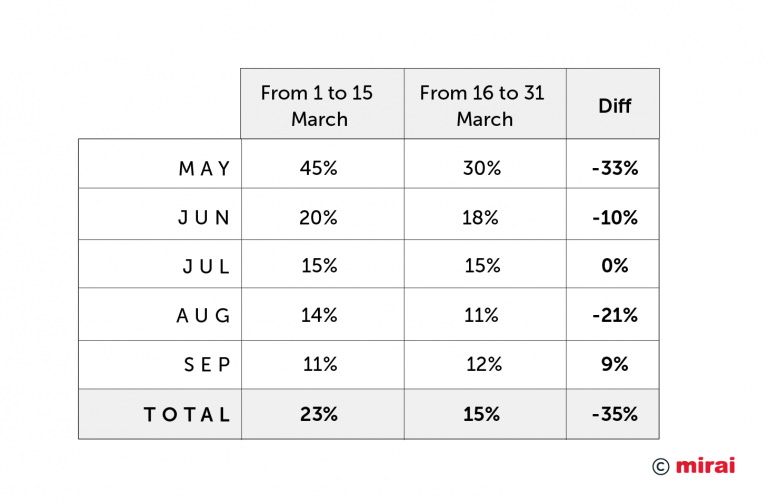 
After the brutal shock to the travel industry due to the coronavirus crisis, the vast majority of hotels stopped or questioned all their investments in online marketing, mainly Google Ads and metasearch.

This decision made a lot of sense given the severity and exceptional circumstances of the moment.

Still, several weeks have already passed and perhaps now would be a good time to start reflecting on this decision and ask ourselves these questions:

Investment fell 80% in the second half of March, compared to the first half, and 90% when compared to the same period in 2019 – figures that correspond with those in a Cleveland Research report.

They illustrate the huge concern that hotels face and new variables to consider that did not exist before:

Nevertheless, not all hotels stopped their campaigns. Were they unaware or was it the right call? Let’s analyze it.

How did hotels that did not stop the campaigns do?

Let us compare the period from March 15 to 31 (updated data including April does not reflect major changes from those shown above). with last year.

Looking at Google Ads’ numbers, we realize that although they worsen, their behaviour is better than expected (given the circumstances). Numbers are, however, discreet and, above all, low in volume.

But what about cancellations?

There is no doubt that cancellations are the factor that generates most uncertainty and the reason most hotels —which have a good cash position and can therefore afford it— are reluctant to activate campaigns.

When analysed objectively, we realize that the numbers are not as they seem:

First, we calculate the profitability-change point, from positive to negative, or breakeven point. Despite a lower return on investment, a 6.5% borne cost is still attractive, as the average cost for online travel agencies is 18% or even higher.

What is the maximum cancellation rate we can afford to reach 18%? With a high 50% of cancellations, we would be at an average cost of 14%, still lower than the cost of OTAs. To go over the 18% line, a 61% cancellation would be needed.

Is 61% a very high level? Typically, we would say yes, but unfortunately, it is not unreasonable in recent weeks, which show 95%+ cancellation in April and 65% already for May. Yet, these high figures are normal, since we are seeing the booking cancellations from previous months and that come all at once.

However, are new bookings cancelled at the same rate as those made before the crisis? The answer is a resounding no, which is also normal. Those who make a reservation for the future already know what to expect and, even so, have a high intention of going.

Obviously two conditions must be met: that they are allowed to go and that they can pay for it, both conditions will be confirmed in the next weeks/months. In any case, we can see the difference between cancellation of previous bookings and new bookings (from March 15 to 31, already in lockdown and in full knowledge of the crisis).

Therefore, when we check the cancellations to monitor Google Ads or meta campaigns, we are not taking into account the total cancellation percentage, but the new bookings. So far, this ratio is much lower, although it will probably get worse.

The big question is: will it exceed 61%? It will surely do so by May, but what about June? And July? Or August? Time will tell.

Hotels are obviously afraid of bookings for stays in the near-future (mainly May and June), but incoming bookings, what dates are they for?

We have analysed the bookings from April 1 to 10. We see that almost 87% of them are for stays in July and later. The risk of cancellation decreases the further away the date is. 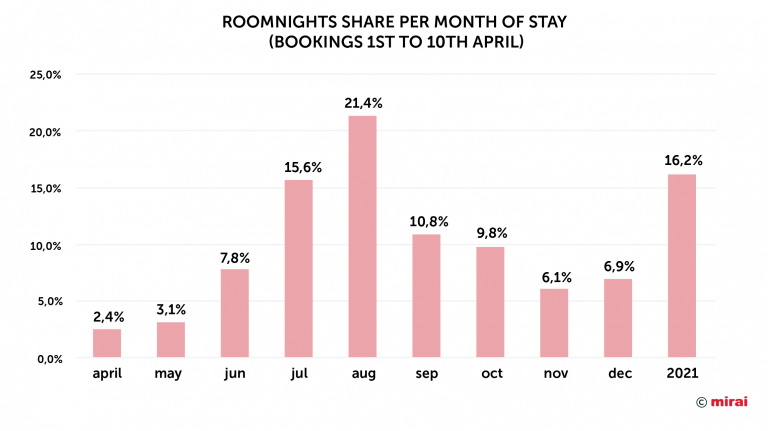 We have the information on profitability, expectations of cancellation and pick-up of new bookings, according to the month of stay.

If we are still afraid of reactivating the campaigns, we can further fine tune by analysing the anticipation according to nationality, and even device, in search of the combination with more anticipation —and thus with less probability of cancellation.

If we analyse the pick-up by nationality in that period (from April 1 to 10), we observe that the monthly distribution of stay varies by nationality. Thus, some European markets such as France and Spain are still timidly betting to go on holiday this summer, expecting to see what happens in the coming weeks.

Other markets such as the United Kingdom and Ireland are clearly thinking on 2021, as is Germany, although to a lesser extent.

The U.S. figure, with peak sales for July and August, is surprising, although the delay in the impact of the pandemic with respect to Europe could be responsible for this. 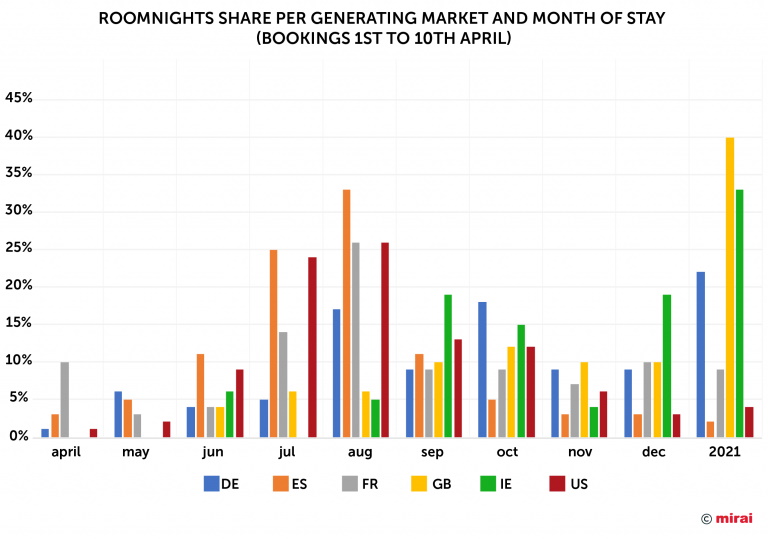 Does it make sense to consider restarting investments in Google Ads?

If a hotel’s need is to care for the cash flow, the answer is: “Now is not the time.”

The profitability of your campaigns can wait several more weeks or months. On the other hand, if your case is different and you have a good cash position (it may surprise many, but there are quite a few hotels in this situation), we encourage you to reconsider your investments, but:

NOTE: We would like to point out that at Mirai we do not have any incentive for hotels to invest in Google Ads since we neither charge for it nor apply any mark-up to this investment.

What if OTAs aren’t bidding on my name? Is it worth it anyway?

Most OTAs, including Booking.com and Expedia, have stopped doing adwords on hotel names. They made the decision as many hotels are in standby mode until they see events unfold.

It would not be surprising for them to be the first to return when things calm down… so we think their absence will not last for long.

Still, we believe that your decision should not be affected since:

The investment in metasearch follows the same pattern as above, with many hotels have decided to pause their CPC campaigns directly, so there is no before and after to compare the break-even point on.

However, and unlike PPC, Google offers a haven that allows properties to keep Google Hotel Ads active. This is the Commission Program (if this possibility existed in Google Ads, practically all hotels would have kept their activity).

In this mode, the hotel pays a commission only on net bookings (after cancellations) and payment too is made after the date of stay, which is very beneficial in terms of cash flow.

In Mirai we have migrated 100% of hotels in Hotel Ads from CPC and CPA models to the Commission Program GHACP, succeeding in maintaining visibility and ensuring the profitability of the investment. 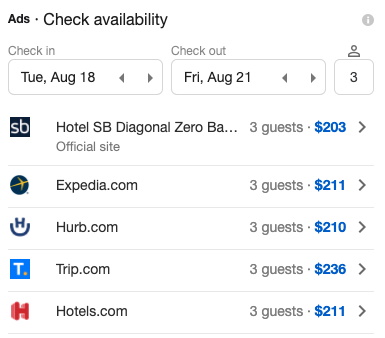 Other advantages of reactivating campaigns

In addition to pure profitability, there are other advantages to having active Google Ads campaigns, probably unknown to many and perhaps important to some hotels.

Here is why we believe it is worthwhile to keep Ads campaigns active:

Calm always comes after the storm. The vast majority of hotels in many countries around the world are closed and many of the most difficult decisions are being made.

After the logical dry spell of investment, it may be time to question and rethink this decision. We do not know when this pandemic will end or when the hotels will finally open, but we do know that there are always customers willing to book even now.

If you are in the cash position to do so, start drawing up a return plan by gradually activating your online marketing strategy.

The sooner we are ready, the more we will capture this now-depressed-but-growing demand. If we do not, the OTAs will be the ones to start.