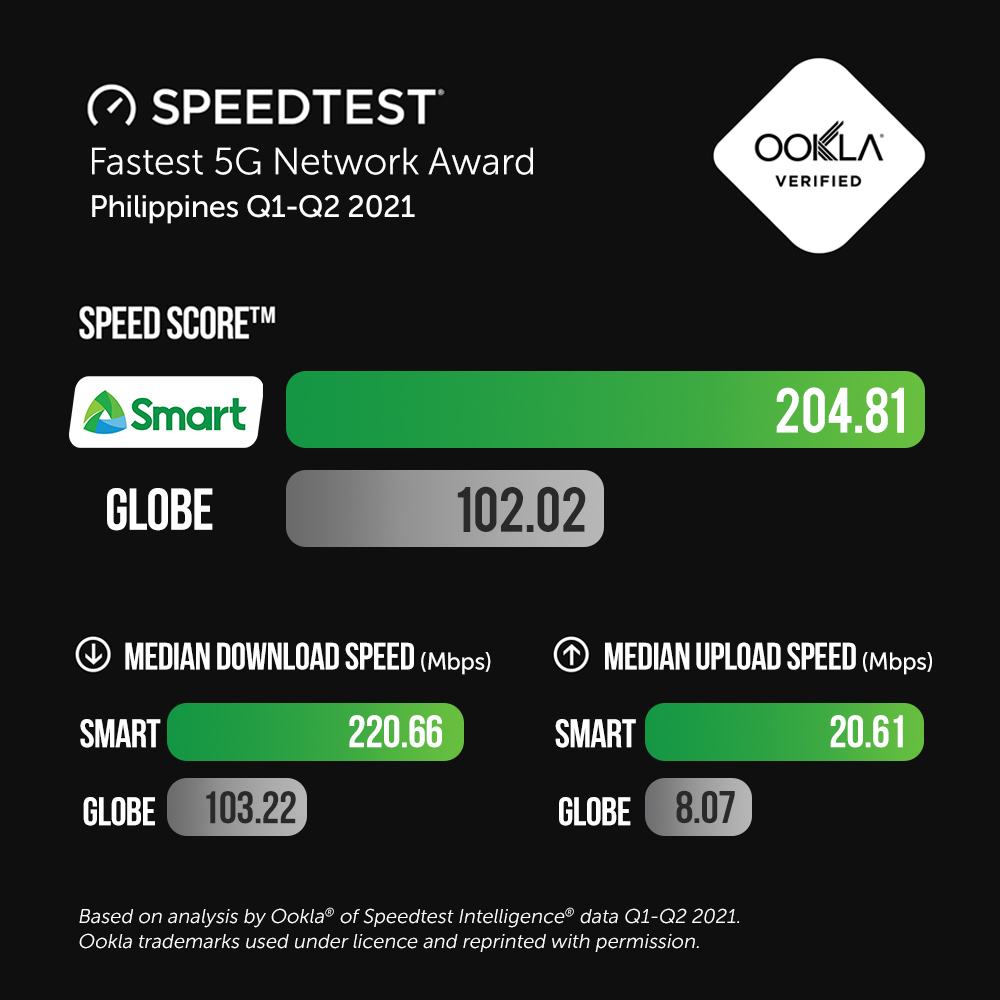 
Team out of Town Hub (www.outoftownblog.com) – Struggling with low internet speed? Can’t watch your favorite Netflix series because it’s buffering? Or worse, you’re suffering from poor video quality. How about the last time you had your Zoom meeting, and you can’t even follow what your colleagues are saying because, again, you have a poor internet connection?

To those planning to change your internet service provider, then this is a sign. Smart recently won the Fastest Mobile Network Award, and here’s what you have to know.

Smart Communications, Inc. (Smart) wins the country’s fastest 5G network in the Philippines for the first half of 2021. This report is based on the latest report by Ookla®, the global leader in internet testing and analytics.

To be specific, Smart dominates with a speed scoreTM of 44.70, a huge jump from the previous year where Speed ScoreTM was at 24.99. The award was given by Doug Suttles, CEO of Ookla. “It is our pleasure to present Smart with two awards for Fastest 5G Mobile Network and Fastest Mobile Network in the Philippines. This recognition is testament to their exceptional performance in Q1-Q2 2021 based on Ookla’s rigorous analysis of consumer-initiated tests taken with Speedtest,” he enthused.

According to Mario G. Tamayo, Head of Technology at PLDT and Smart, they are thriving to make the latest 5G technology available for more people in more areas. It has encouraged them to see how these awards reflect actual customer experience and are indicative of how our overall data service experience is progressively improving.

Reports showed that Smart’s 5G speeds are ahead in key areas nationwide like Manila, Cebu City, and Davao City. Smart also takes pride in its download and upload speeds that are faster compared to its nearest competitor in these areas.

It was also discovered that Smart’s 5G download speeds are at 268.01 Mbps, with the nearest competition at 81.82 Mbps in the Manila area.

How is speed determined?

To determine the speed score including the download and upload speed, Ookla assesses the average of test results taken using Modern Chipsets. This modern Chipset includes all mobile tests, regardless of connection technology used as long as they are taken on devices that are identified as being capable of achieving the fastest speeds available in a market. After this filtering has taken place, Speed Score is applied as outlined above to determine the best speeds available in a country.

The reason for the improved internet speed in the country is because of the government’s all-out support in expediting the release of LGU permits for the improvement of telco infrastructure.

As of July 27, 2021, PLDT and Smart have secured more than 25,000 fixed and wireless permits since the government fast-tracked approvals for telco firms last year.