It is said that no one in the world is recognized as a billionaire unless his boat is anchored in the French city of Saint Tropez (also called San Thopa in French).

No house in this city is worth less than one billion rupees, so everyone here is a billionaire. But the first billionaire here was a French general, Allard, who was a general in Maharaja Ranjit Singh’s ‘Special Forces. His 20-room, 20-suite palace, which he named ‘Pan Day Mahal’ (Pan Dei Palais) after his Indian wife, is now the city’s one of the best hotels, where people aspire to spend a night. So that they can feel the touch of this everlasting story of love growing between France and Punjab. On its walls are still paintings of General Allard’s Anarkali house.

What is the story of General Allard and Pan Dai?

How did Allard reach Punjab and join Ranjit Singh’s army? This story is very interesting in which there is romance, excitement, and the whole world of migration.

General Allard (Jean-François Allard) was born in 1785 in St. Tropez, then a small village. In 1803, at the age of 18, he joined Napoleon’s army, where he was honored by Napoleon for his God-given abilities. When Napoleon was defeated and taken prisoner at the Battle of Waterloo in 1815, Napoleon’s close associates, including Allard, were imprisoned because they were Napoleon’s ideological allies. When he was released three years later, due to unfavorable conditions in France, he moved to Italy with his uncle, who sent him to work with Crown Prince of Iran, Abbas Mirza.

Allard remained in the Crown’s special forces for some time, but since he was in the eyes of Britain, Abbas Mirza apologized to Allard for the threat of British opposition, after which he turned to Kabul, where one of Napoleon’s General Ventura was there.

Allard had learned Persian while living in Iran, and when he came to Lahore with General Ventura in March 1822, the two gained access to the court through Ranjit Singh’s foreign minister and special adviser, Faqir Azizuddin. The Maharaja was feeling the threat of the British army on his borders at that time, so he considered it a blessing to establish the Punjabi army on European lines. On the other hand, he feared that they might be spies, so he made no decision but ordered that they not be allowed to leave Lahore.

After observing them for three months and after much deliberation, Ranjit Singh hired them. Their salary was kept at Rs. 2500 per month. General Ventura was made general of the infantry, and General Allard was made general of the Cavalry. On joining the army, Ranjit Singh took an oath from all non-Indians that they would remain loyal to Punjab in the event of an attack by a European power, that he would not correspond with any European government without the permission of the court, they will not eat beef, they will not smoke, and if they wish to get married, they will marry to an Indian woman.

General Allard trained 40,000 Punjabi troops and modernized them. His training was so rigorous that many soldiers fled. He formed a special platoon of commandos and another Gurkha platoon, which was praised by British General Edward as the best army in Asia. He proved his mettle in 1825 in Peshawar and Dera Jat and then between 1827 and 1830 against the jihad movement of Syed Ahmed Barelvi.

Hari Singh Nalwa, the chief of the Khalsa army, was killed in the attack on Jamrud by the Afghan king Dost Mohammad, after which General Allard ensured the security of Peshawar. From the Himalayas to Multan, they stood like a leaden wall against the British army. As long as he was alive, the British army could not enter Punjab. He made the uniform of the Punjabi army in the style of Napoleon’s army. Maharaja Ranjit Singh trusted General Allard to such an extent that he gave the command of his commando force to General Allard, numbering six thousand. General Allard was not accountable to anyone but the Maharaja.

The closeness between the Maharaja and General Allard turned into a relationship when the Maharaja married General Allard with Banu Pandey, the 12-year-old daughter of his cousin Raja Menga Ram of Chamba. The marriage, which took place in March 1826, was in fact a continuation of a royal tradition that turned friendship into kinship in the royal families of the time. Banu Pandey, also known as Pan Dai in French, was born in 1814 and married at the age of 12.

Over the next eight years, they had seven children with General Allard. Pan Dai was a princess. When she came to General Allard’s house with the whole Eastern cultural tradition, the heart of this Western general was so moved that he even wrote poems in Persian in love with Pan Dai.

From Allard’s first marriage, he had a daughter, Mary Charlotte, whom he loved dearly, whom he invited to India. Marie Charlotte was in love with a young man in France, but on the other side was a father she hadn’t seen in eight years. It is said that Charlotte met a nun before coming to India who told her that you will not find love, death is waiting for you in India. This is what happened. She came to India but died suddenly on April 5, 1827.

General Allard was deeply shocked by her sudden death and built a magnificent mausoleum on his daughter’s grave like the Mughal princesses in the 48-Kanal compound and planted a magnificent garden which is still known in Lahore as Kadi Bagh. Allard was shocked by the sudden death of his daughter and realized that if anything happened to him, his young wife would be sati with him (the custom among Hindus was that when a person died, his wife was also burnt with his coffin and this ritual was called Sati.), so he sent his wife and children to France in 1834. Created a migration program. General Allard asked Maharaja Ranjit Singh to allow him to train his children as Christians in France.

The Maharaja did not agree, fearing that Allard would not return, but Allard promised that he would not only return but would also bring modern weapons from France and the French King’s help against the British, to which the Maharaja replied, Allowed to go.

When General Allard visited France, he was received as a royal guest. In France, the wedding ceremonies of Allard and Pan Dai were performed religiously in the church. Allard built a magnificent palace for the Pan-Dai in France, which not only kept Indian architecture in mind but also hung masterpieces of art brought from India. It was the most magnificent palace in St. Tropez at the time. General Allard said goodbye to France in December 1835 and never saw his family again.

In 1838 he was sent to Peshawar to assist General Otibel, where he died of a heart attack on 23 January 1839. Since the Maharaja himself was ill, he was not given this sad news. His body was brought to Lahore with full military honors. He was given a guard of honor in every military cantonment from Peshawar to Lahore. When his body reached Lahore, soldiers were stationed all the way from Shahdara to Anarkali, who opened fire and paid tribute to their brave general. He was buried in Kadi Bagh, where his two daughters were buried.

In France, on the other hand, Pan Dai had a special status as the wife of an Indian princess and General Allard and was respected in the aristocracy there. She says she was not convinced when she heard of General Allard’s death. She went to church for peace of mind and then converted to Christianity and joined the Roman Catholic denomination.

The King and Queen of France addressed her as their daughter in a special ceremony, which was also attended by General Allard’s friend General Ventura. On July 25, 1845, Pan Dai’s youngest daughter, Phils, who was ten years old, died. Due to the tragic deaths of her husband and daughter, Pan Daika’s heart was no longer in the palace, which had General Allard’s memory engraved on each stone. She moved to another house on the beach, where she spent the rest of her life remembering General Allard.

It is said that she sits on the beach every evening and ask the oncoming waves if anyone had seen General Allard’s ship coming from India at sea. When there was no answer, she would return in the evening in tears and then spend the whole night counting the stars in the open windows facing the sea. She could have returned to India if she wanted to, but according to Allard’s wishes, she raised her children in a Christian way. Their children were married into the families of the French elite. The restless soul of India finally flew on January 13, 1884, but those who visited her tomb feel the anguish of love that spread from Lahore to France.

The French government has installed statues of Maharaja Ranjit Singh, General Allard, and Pan Dai in the city. The historic painting at the Pan Dai Hotel also captivates tourists, with General Allard and his family at his home in Anar Kali. The fifth generation of the Allard family now lives in St. Tropez. His great-grandson Henry Provost Allard has also been the city’s deputy mayor. He is the author of three books in French, one on General Allard.

This timeless love story was born in Lahore but no one here knows what the story of ‘Kadi Bagh’ is. The tomb of Anar Kili, where the Civil Secretariat of Punjab is today, was built for the French General Lord and his wife Pan Dai
The French are selling this love story born in Lahore to billionaires all over the world and the people of Pakistan don’t even know that this story belongs to Lahore. 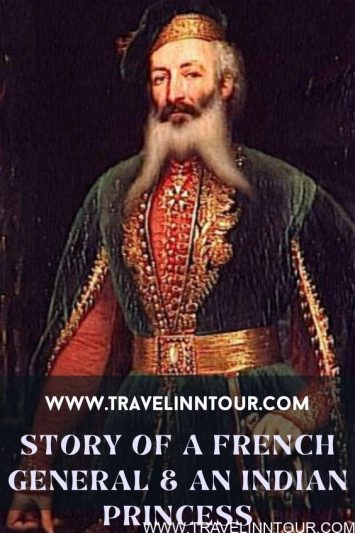