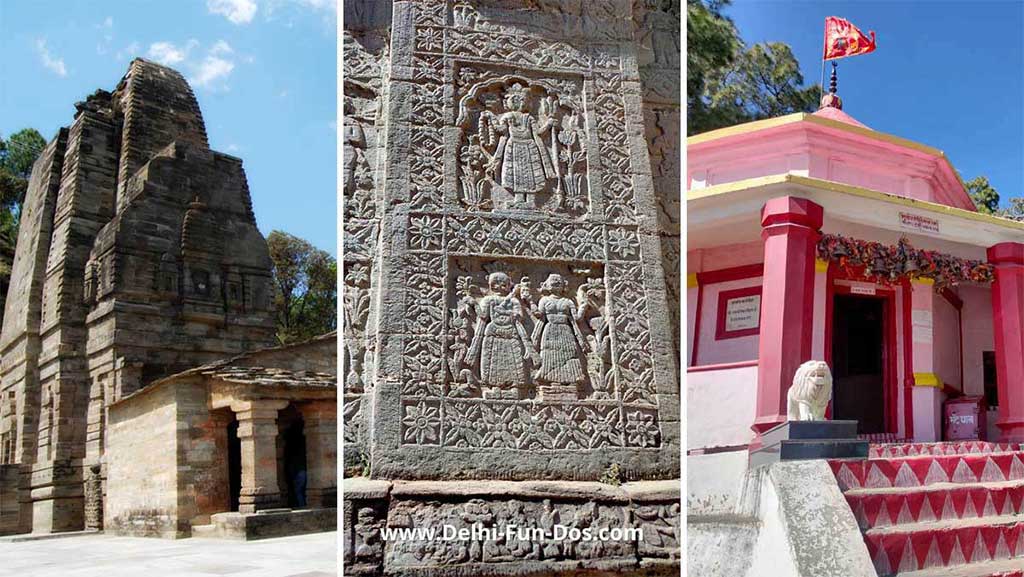 
Our trip to Uttarakhand this time was a lot about exploring the unexplored. Uttarakhand architecture is punctuated with beautiful temples. Uttarakhand Shiva temples boast of Kedarnath, the ultimate destination for all devotees. Dedicated to God Vishnu is Badrinath that draws pilgrims and tourists from all over the world and much is written about these shrines. In fact, pilgrimages have been the earliest form of tourism. Pilgrims have scoured the mountains of Uttarakhand since the days of yore. In the process of visiting the shrines mostly perched high up the Himalaya, they would experience the beauty of nature amidst the rivers and trees, flowers and fruits of the mountains. We were recently in Almora and landed up following a similar travel trail, rather by chance.

If you are planning to explore Almora, almost every town has some treasure here waiting for you. Popular places to visit in Almora included generous doses of churches and ancient temples. Almora temple list is long and we had seen some of these before. But some were absolutely new to us and we discovered perchance! We are yet to visit the famous Jageshwar Temple and Chitai Golu Devta temples here. But the ones we describe below are hidden gems of Uttarakhand and a must-visit whenever you are in this region.

One such hidden treasure was the Katarmal Sun Temple in Katarmal, Almora. Locally known as the Badaditya (Baraditya) Temple dedicated to the Sun God, this temple was built by Katarmalla of the Katuriya dynasty in the 9th or 10th century. The Katuriya dynasty ruled Kumaon in that period. The temple complex, atop a hill, was a cluster of 44 stone temples, with a tall main shrine and many small shrines of various sizes. The sanctum sanctorum in the main shrines housed a magnificent black stone statue of the Sun God in the rare sitting posture. He was flanked by other gods and celestial beings, his chariot was drawn by the symbolic 7 horses. Many other smaller statues such as Mahishashurmardini and Vishnu were also placed here perhaps from other parts of the temple. Although the temple was a protected monument under the supervision of the Archaeological Survey of India, regular worship took place here.

The Katarmal Sun Temple was about an hour’s drive from our resort Nayalap and it would be perhaps 2 hours by road from Nainital. Till a decade back, one had to park at the bottom of the hill and trek up to visit the shrine. It’s simpler now with a proper road leading to the base of the temple whereafter you have to climb a comfortable 50 steps or so. Newly constructed bathrooms and café make the spot even more tourist-friendly.

When one talks about erotic temples of India, it is mostly Khajuraho. Believe it or not, tucked in the lanes of Almora we chanced upon an ancient temple that had panels of erotica on its walls. This was the Nanda Devi Temple built by the kings of the Chand Dynasty who ruled Kumaon. Nanda Devi, their presiding deity, is a form of Goddess Parvati and is highly revered by locals. Parvati or Uma or Durga, as per Hindu mythology is the daughter of King Himalaya. Hence worship of this Goddess, in her various forms, is very common in the Himalayan regions of India and Nepal.

Truth be told while doing a trail of Almora Main Market, we were looking for Tripura Sundari Temple, the more popular shrine here. We saw an ancient temple complex here and mistook that for Tripura Sundari. Looking at the boards we were soon corrected, but the captivating carvings of the stone shrine kept us spellbound. The base on the outside façade had very clear elephants, lions, snakes and fish in artistic forms. Above these were carvings depicting kissing figures, people in coitus and even a number of men and women in some erotic act. Atop that were larger panels depicting marriage and at the top were deities. Unlike Khajuraho, the carvings here were better spaced out, the designs were less cluttered. Hence every form stood out distinctly. Unique crown-like wooden turrets protected the temple tops. We had no knowledge of this temple but we could see that it would be at least 1000 years old and later the priest confirmed this information. Yet it was well-preserved for its age.

The stone-carved shrines had Shiva lingam and a relatively plain shrine, covered with grout and painted yellow housed the statue of Nanda Devi. While the stone idol of the goddess was covered in flowers and a bright coloured shroud, given the trident, we believe it was a form close to Durga or Mahishashurmardini. It gave us goosebumps to think the gods in this temple had been continuously worshipped since its inception 1000 years ago.

Tripura Sundari Temple was in the vicinity of the Nanda Devi shrine. It was a rather nondescript flight of stairs beside a very impressive statue of Lord Hanuman. We had perhaps missed the temple entrance for this reason. The stairs led to an open courtyard with a shrine at the centre. The stone shrine, probably with some carvings, was now coated with grout and painted in yellow with red borders. Charming white and red aipan designs decorated the floor.

The sanctum sanctorum contained many small statues that we could not identify very clearly. The statues were in some black stone and had white eyes and a playful countenance. The place was clean and we got a nice view of the surrounding lanes of Almora below.

Kasar Devi is a village in Almora that is eponymous to the Kasar Devi temple perched atop the mountain. Legend has it that Devi Durga had slain the demon brothers Shumbha and Nishumbha at this spot and the impression of a lion on a rockface marks the presence of the Goddess. Some years ago, a shrine was built around this rock face and a marble statue was placed about 15 years ago. Another flight of stairs led to a smaller Shiva temple.

Swami Vivekananda had visited and spent some days in Almora in the year 1890. He trekked up to Kasar Devi summit and had meditated here. However, proper roads connect this temple now and one has to walk up the last bit, a flight of 50 steps or so unless you want to trek the whole distance for sheer adventure and wanderlust.

On that note, Kasar Devi has suddenly become a popular trekking spot in Uttrakhand and we wanted to visit this place for a while. We had no plans and it was sheer luck and courtesy of our host Tanuja of Nayalap that she drove us here. But Kasar Devi has some strong pull. We are told that as per NASA, it is one of the strongest magnetic fields on earth. Cool looking cafes dot this zone now and maybe we shall come back again to Kasar Devi.

Incidentally, Tanuja took us a little further, on an edgy path, to show us some rock inscriptions in Brahmi script. That was a super-duper bonus on this tour!

Where to stay in Almora

Almora has a host of accommodation options such as hotels, resorts and homestays. We stayed at a relatively quieter Shitlakhet village in the luxury camp Nayalap that faced the Nanda Devi range. Thanks to the arrangement made by our hosts, we could cover the temples described in this post.

How to reach Almora

Almora is well-connected by trains and buses. We took the Kathgodam Shatabdi from Delhi and dropped at the penultimate station Haldwani. Thereafter, Almora was approximately 3 hours of drive time. Given the good roads in this part of Uttarakhand, you can drive comfortably from Delhi and it should take you about 10 hours. The nearest airport is Pantnagar at a distance of roughly 130 km.

All these temples are architectural marvels of Uttrakhand. One wonders how such high standards of beauty and precision was achieved with basic tools in the days of yore. Was talent so widespread in India those days that be in Khajuraho or Ellora or Dilwara, skilled stone-carvers with distinct styles were active everywhere? Sitting in this day and age of mechanization, we can only imagine. One does not need to be religious or even history-minded to visit these temples. They punctuate the glorious natural wealth of the Himalaya Mountains and may be explored by any traveller.

All the temples that we mentioned in this post have very convenient vehicular approaches and can be visited by anyone.