When traveling the world, it’s not about just seeing the sights and perhaps learning a few words of the local language. It’s also about tasting the food, sampling traditional cuisine.

Culture is about gastronomy, and in the Balkans, there are plenty of authentic and traditional dishes to try. You’ll also find that many Serbian dishes overlap with neighboring countries. There are, however, subtle differences to explore.

Serbian food has had many different influences throughout the years, which is reflected in the food. These influences have made Serbian cuisine a real melting pot (pun definitely intended) of delicious flavors for the taste buds.

Influences, ranging from oriental all the way to many parts of Europe, Serbian cooking has its roots in meat, making it a hearty choice for colder days, but you’ll also find many vegetables included in the most local Serb dishes.

Pastry is also quite prevalent in Serbian meals. So, when you combine that with meat, you certainly are not going to starve. But that’s okay, of course, there are loads of things to do and see in Serbia, from Belgrade to Novi Sad, to keep you busy and help you burn off those extra kilojoules.

To give you an idea of what you can expect to see when you’re traveling around Serbia, and the best Serbian food to try, let’s explore the wonder of Serbian cuisine. This list will have you ready to rent your car and road trip the country for yourself, just to eat!

You’ll find cevapcici or cevapi all over the Balkans, from Croatia to Romania, and these are delicious, small sausages made of minced and grilled meat. The meat is usually either pork, beef, or lamb, and can also be a mixture. You will often get a portion of around 5-10 different sausages served on a fresh flatbread with onions, red pepper relish, and sometimes sour cream, too, if you want it. This is a common and quite cheap Serbian street food you will find at most takeaways, so give it a try.

Very similar to cevapcici, pljeskavica is a patty type of food and is usually made with either beef or pork, and a real spicy kick to boot. You’ll find it served in bread, with onions. The patty itself is mixed with a type of milky cream and a pepper sauce.

This is another very easily found type of street food and is actually one of the most popular snacks you’ll find. It’s cheap and cheerful, and because of the amount of meat in it, also very filling. If you’d like to try Serbian meat dishes, this is one you won’t have any trouble finding. 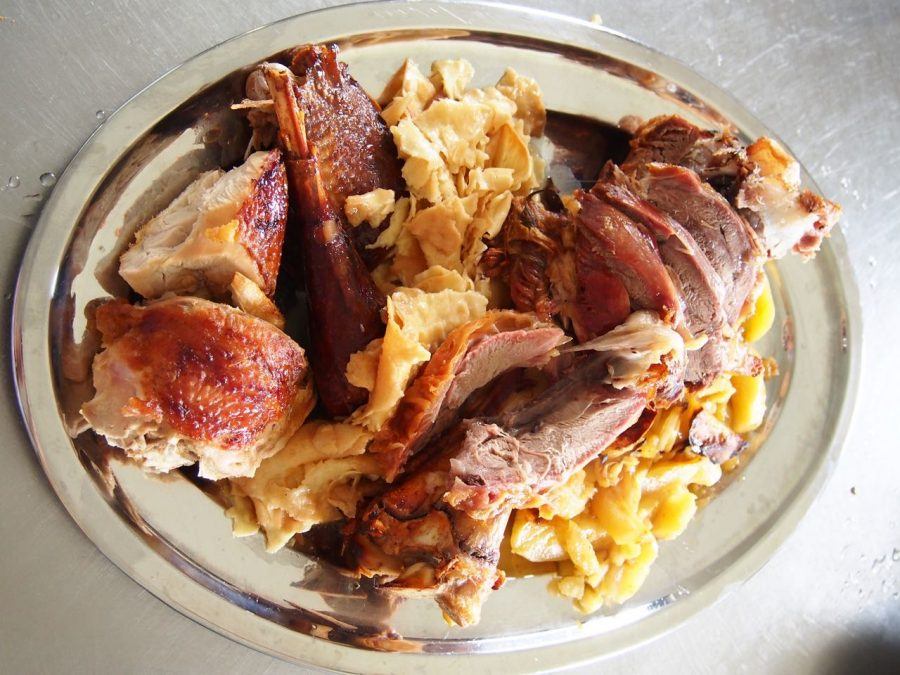 Its name meaning roasted meat, you’ll usually find pečenje all over the country in various forms. This is one of the absolute must-have traditional Serbian dishes at big celebrations, such as weddings. Pečenje is usually a whole roast pork joint, a whole lamb joint, or even goat, depending on your preference, and comes with various side dishes.

It is always served in thick slices, and in great abundance, so expect to be full!

This particular dish is better known as the “Viennese schnitzel”. Actually hailing from Austria, it has found a lot of popularity across the continent and into the balkans.

It is a boneless meat, which is hit with a hammer until thin and then coated in breadcrumbs and deep-fried. It’s often served as a main meal, usually with potatoes and butter, and garnished with parsley.

Another of those Serbian meals with a meaty punch, this is a steak dish of either rolled pork or veal steak.

It is stuffed with something called kajmak, which is like a clotted cream, and is then breaded and cooked, usually fried or baked. Once served, it is usually comes with potatoes and tartar sauce.

The kajmak in the middle turns into a creamy sauce when cooked, and makes the meat super-succulent. Delicious!

Perhaps not one for those with a weak stomach, skembici is very old Serbian dish, considered as one of the real Serbian delicacies by locals, in fact. This is actually a tripe soup. Yes, really.

The tripe is served in a stew, made of various vegetables, herbs and is usually served alongside boiled potatoes, for a real filling and hearty dish. You’ll find tripe soup in many neighboring countries, and if you really want to try something new and traditional, this is the dish to try. 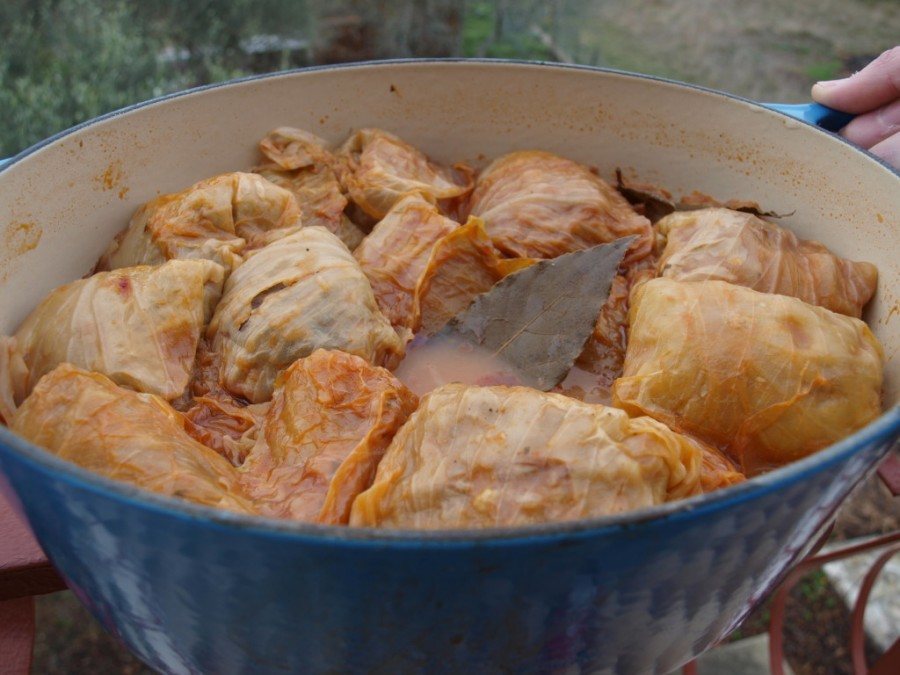 Sarma has many variations around the Balkan region, but as a traditional Serbian food, it is usually a type of beef ground into mince and mixed with rice.

The mixture is then wrapped in a cabbage leaf, but can also be a grapevine or a different type of green leaf. This is then simmered and served with several side dishes, often including sour cream. You’ll find many traditional households serving sarma, and it is much more hearty and filling than you might think from looking at it!

Seafood is quite popular in Serbia and if you are in a local seafood restaurant, you should definitely try this type of delicious fish stew for your authentic Serbian dinner. If you’re not a fish lover, you’re encouraged to still give this a go. It’s not overly ‘fishy’, but has a very fresh flavor. The stew consists of paprika and tomato juice and has a spicy kick to it. 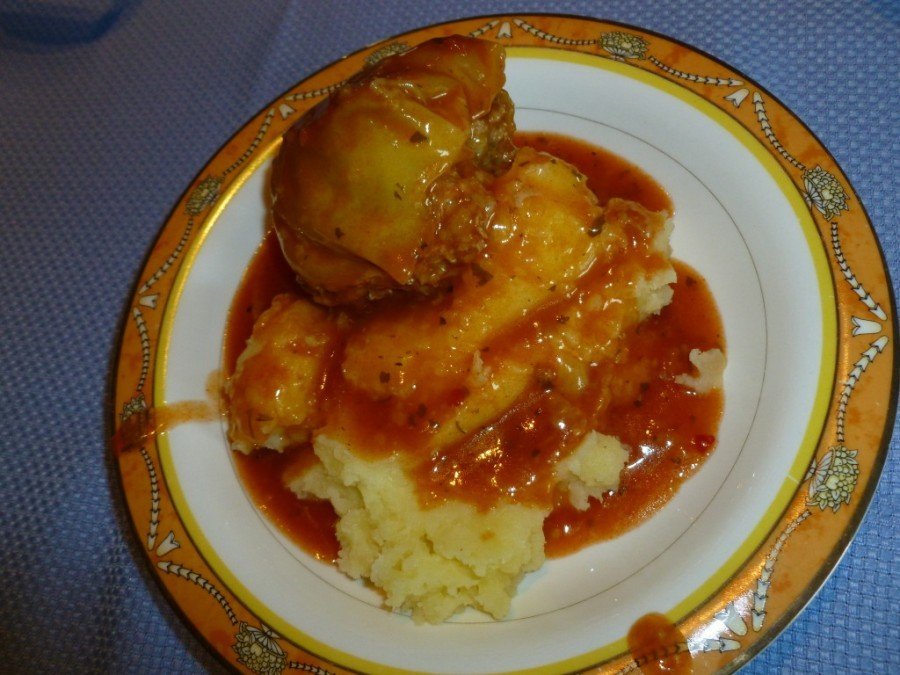 Paprika is very commonly found in Serbia, and this is a stuffed paprika dish. It is stuffed with a combination of different meats, rice, tomato sauce, egg, spice, and red capsicum to give it a kick.

Again, it’s a very hearty dish, but a somewhat healthy one at the same time. You’ll also find this commonly in many households at dinner time and in authentic Serbian restaurants.

Hailing from the eastern Balkans and Turkey, burek has become an established staple in Serbian cuisine. The main ingredients of this delicious, savory pastry dish are phyllo dough and ground meat, which can be beef, lamb, pork or any combination of those three. Alternatively, you can also use cheese as a savory and creamy filling.

Burek comes in various shapes, from coils and cylingers to round pies, but it is tradionally cut into small squares. A mouthwatering Serbian dish, burek squares are eaten as appetizers, a filling snack or even as a main course.

This is a Serbian pastry dish, and one that is easily eaten on the go as a snack. It is basically a cheese pie made a little like the regional favorite burek, which we’ve described above. There are layers of thin dough filled with delicious and quite strong cheese, which are then glazed with egg to give it a golden color.

This is a cornbread dish that dates back many years. This particular dish was popular during times when money was low and poverty was prevalent in the country. It was easy to make, cheap, hearty, filling and it didn’t spoil.

Despite times improving, you’ll still find proja in many households and traditional restaurants. 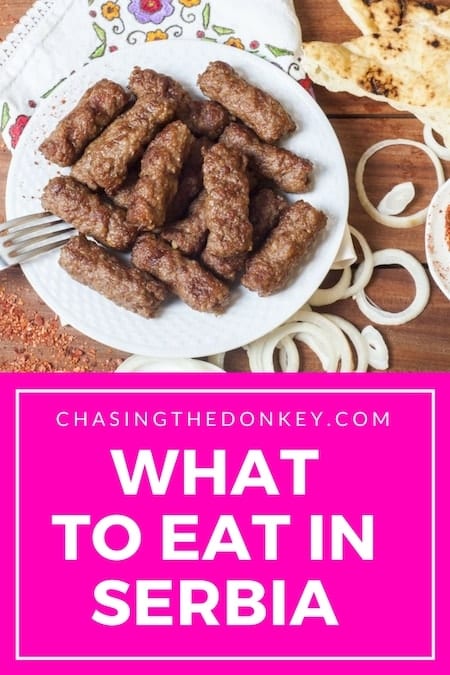 This is a traditional Serbian salad served with many other main meals. You’ll find it mostly in the south of the country, but it is quite widespread regardless.

It is a salad of cheese and very hot peppers, as well as a few other spicy treats. You’ll notice that it is spiciest in the southern reaches of the country, where it hails from, and can be a little different from place to place in terms of mildness or otherwise.

A Serbian red bell pepper spread, ajvar (pronounced: i-var) is a traditional dish in Serbian cuisine that’s now popular all over the Balkans, and even the world. It is eaten in a variety of ways, including as a spread on bread, a salad or a side dish with fish or meat.

Ajvar is super-easy to make at home, its recipe not calling for anything else than red bell peppers, eggplant, garlic, olive oil, salt and pepper. After the bell peppers and eggplant are roasted, either in the oven or on the grill, all the ingredients are blended to form a paste or relish. For different touches of flavors and heat, you can add a little bit of tomato paste, roasted red onions and/or chili flakes as well.

This traditional Serbian dish is amazing as a dip with toasted pita bread or as a side with roasted/grilled meat or fish.

This is a sweet pastry which is filled with chopped nuts and honey (which also happens to be a great souvenir to bring home) and usually sprinkled with pistachio nuts. It’s sticky, it’s sweet, and it’s filling (again), but you’ll definitely want more than one piece!

You’ll usually see popara at breakfast. As a quite heavy dish, It will probably fill you up for the rest of the day.

This is a meal made with bread, cheese, kajmak (the creamy milky ingredient we mentioned earlier), milk and water. This is an accompaniment dish, rather a Serbian dish on its own, but again, it will certainly fill you up! 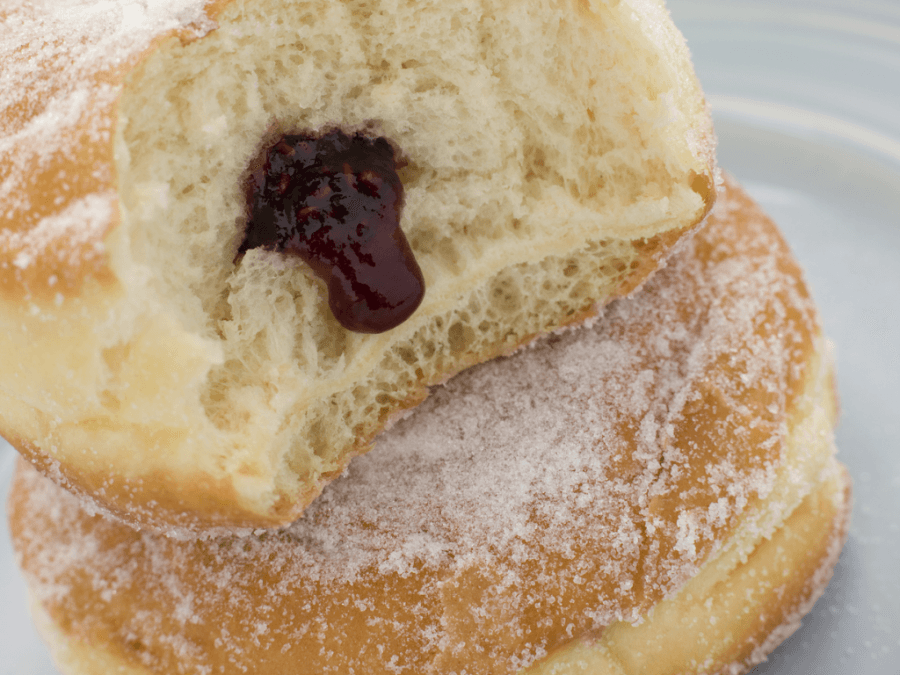 Krofne is a doughnut and can be filled with various different ingredients, such as jam, chocolate, or even marmalade, custard or cream. The most common filling is jam or chocolate, and you can easily grab and eat one on the go if you have a sweet craving.

Similar to the above-mentioned krofne and to Croatian fritule, uštipci are fried balls of dough that can be eaten for breakfast, as a mid-afternoon snack, dessert or even as a main course. Making them is somewhat easier than making krofne. They also don’t necessarily have to be sweet, although popular fillings do include jam, apple and chocolate. Savory uštipci fillings range from pumpkin and cheese to meats.

Again, you’ll find regional variations of palačinke all over the balkans and Europe. The typical Serbian food version, however, is quite delicious! This is a crepe or pancake, and it is traditionally filled with cream, chocolate sauce, biscuit, walnuts and sometimes honey. You’ll easily find them all over the place, either as street food or in dedicated shops (that’s how popular they are). There’s also a savory version to try, which is often filled with cheese or ham.

As you can see, typical Serbian food won’t leave you hungry! These are just a few Serbian dishes to try while enjoying your vacation in Serbia. If you have another you’d like us to add, let us know.