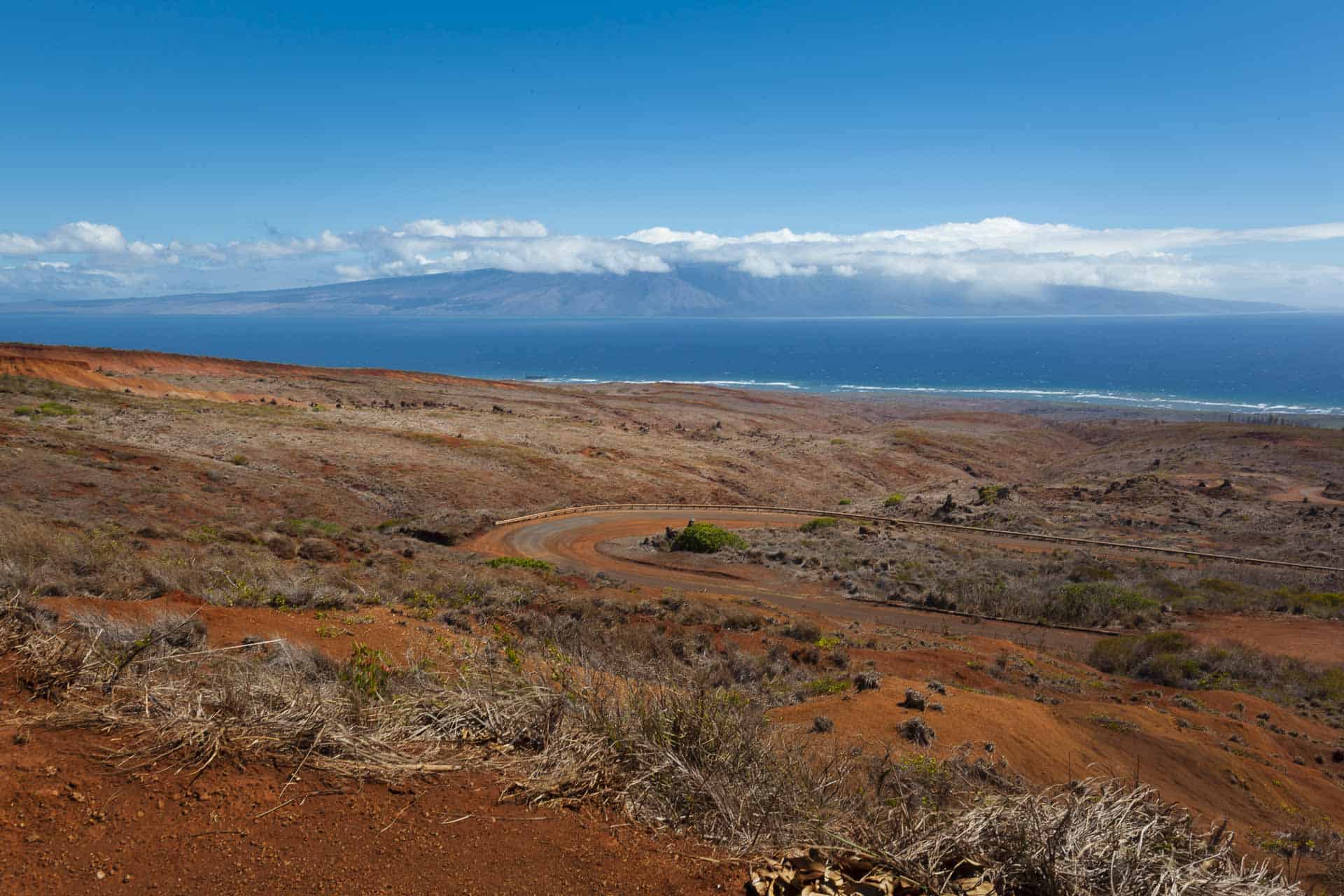 
Lanai Island in Hawaii isn’t the most well-known of the Hawaiian islands. Most people only take a day trip from Maui to Lanai, but it is worth so much more than just a day trip. We spent seven days on the island and found that there are many amazing and unique things to do in Lanai that make for a memorable vacation in Hawaii.

Just a short 40 minute ferry ride from Maui or a quick 30 minute flight from Oahu gets you to Lanai. Known as the Pineapple Island, Lanai was once home to the Dole Pineapple Plantation producing 75% of the world’s pineapple!

Lanai, pronounced La-nah-ee is the 3rd smallest Hawaiian island and the smallest publicly accessible inhabited island. When landing at the ferry port, Manele Harbour we took the complimentary shuttle take us to the Four Seasons Resort Lodge at Koele. This was where we stayed for the first couple of nights and then we moved on to the Four Seasons Manele.

There are only three hotels on the island and we stayed at them all. Our final night was at the Hotel Lanai in Lanai City. They all have their charms and they are all worth starting in to split up the nights on Lanai as each location is very different. We suggest staying at the ranch for three nights and then move to the beach for the next half of your trip with a final night at the Lanai Hotel.

Things to do in Lanai

There is no doubt that the beaches and clear waters of Hawaii are the top draw to the islands and Lanai is no different, but there are a lot of attractions in Lanai that are unique to the island. A trip to Lanai involves the perfect mix of watersports, cultural experiences, and pampering that will make this a trip to remember. So let’s get started!

Rent a Jeep for a Day

For our first day on the island, we rented a jeep to see some of Lanai’s top off-the-beaten-path attractions. Having a jeep is a great way to get around as some of the terrains on Lanai is rugged and exciting. A lot of Lanai’s attractions are best reached by four-wheel drive.

Garden of the Gods – Keahiakawelo

Keahiakawelo is also known as the Garden of the Gods is a located 45 minutes from Lanai City on the northwest side of Lanai. Its otherworldly lunar landscape features a massive rock garden filled with rock towers and boulders.

Legend has it that t it was created as a result of a contest between two the two kahunas (priests of Lanai and Molokai to see who could keep a fire burning longer. If you want to feel like you are walking on Mars, this is the place to be.

Polihua Beach is a 2- mile stretch of beach that offers gorgeous views of the neighboring island of Molokai. This rugged day trip in Lanai is a beautiful secluded beach that is perfect for beachcombing. It’s about 60 miles from Lanai City and about a half-hour past the Garden of the Gods. If you are lucky, you may see green sea turtles or spy a humpback whale from the shore.

It was over a century ago that the cats came to the Hawaiian Islands on whaling ships. They reproduced and overpopulated the islands endangering the endemic bird species and wreaking havoc on the ecosystem. Many residents saw these cats as pests and poisoned and trapped them. But today, the Lanai Cat Sanctuary is working to keep the cat population is under control and the birds are coming back.

Set on two acres of land, the Lanai Cat Sanctuary keeps up to 300 cats and has a no-kill policy. If you are visiting the Island of Lanai, arrangements can be made at the Four Seasons to visit the center. They don’t charge a penny and you will be picked up by a volunteer who will bring you to the sanctuary for a pet and purr session. Or you can help out with some gardening, painting, and grooming.

Kaiolohia, also known as Shipwreck Beach is a 6 mile stretch of coastline that is located on the north shore of Lanai. Large swells and strong trade winds have caused more than one shipwreck off its coast. When visiting the beach, you’ll see a 1940s oil tanker that still remains beached on Kaiolohia Bay’s coral reef. The ghostly rusted hull creates an eerie scene.

From the beach, you will also see great views of both Molokai and Maui. While you are there, be sure to check out the Poaiwa Petroglyphs. They are located along the trail a short distance from the beach.

Wander through the remnants of the past at Keomuku Village located on the east coast of Lanai. It was a fishing village until 1899 when plantation owners moved in turning it into a sugar plantation. Explore the abandoned village and the remains of the Ka Lanakila o Ka Malamalama Church that was recently restored, as well as the area where the sugar plantation was once in operation. It is well worth visiting this lesser known attraction on Lanai.

Located at the old Dole Pineapple Administration Building the Lanai Cultural and Heritage Center takes you through the history of Lanai. We didn’t know much about Lanai before visiting and this was the perfect introduction to Lanai and its pineapple history. It is a great first stop on Lanai to help you understand the sights you will be exploring and the people you will meet.

The luxurious Lanai Four Seasons Koele has beautiful stables on the grounds. You can go for a stroll to see the horses relaxing in the fields, or you can book a horseback riding experience. The rugged terrain of Lanai was made for a good trail ride.

From December to May, the island of Lanai becomes one of the best places for whale watching in the world. The Auau Channel is located Lanai, Maui, and Molokai attracts more than 10,000 humpback whales who migrate to its warm shallow waters.

Enjoy a relaxing sail aboard one of Trilogy’s state of the art catamarans to a protected cove on the western shore of the island, where you will be able to snorkel and view the underwater life that awaits you.

We aren’t much on golfing, but a visit to the Manele Golf Course is a must. Located at the Four Seasons Manele Bay, the world-renowned Manele Golf Course was designed by Jack Nicklaus. Even if you are not into golf, we recommend having lunch at its restaurant for gorgeous views. PS. Bill Gates has played a round here.

The Spa at Manele Bay

Staying at Four Seasons Manele Bay is a real treat and one of the most romantic destinations on earth. Booking a spa here was one of our favourite things to do in Lanai. A couples massage on the beach in a cabana is the most decadent thing you can do. Enjoy the warm breeze of the Pacific Ocean as you listen to the waves crash against the shore. And then spend the afternoon relaxing by the

Located within walking distance from the Four Seasons Resort Lanai at Manele Bay Sweethart Rock, also known as Pu´u Pehe is a huge rock formation just off the coast.

When you talk romance, I can’t help but to mention Pu´u Pehe, better known as Sweetheart Rock on the island of Lanai. This is the perfect couple’s getaway complete with its own love story.

One of the most popular things to do in Lanai is to hang out at Hulopoe Bay at the Four Seasons Manele Resort. It’s a great place for sunbathing and snorkeling in the summer. During the winter months keep an eye out for dolphins and whales from the shore.

While at Hulopoe Bay be sure to take a walk to explore the lava tidal pools at low tide. It’s very cool to see what critters you’ll see floating around inside the pools between tides. Be sure to wear reef shoes, keep an eye on the tides and wave and have fun!

If you are looking for a good hike around Lanai, this 12.8 mile trail begins in Lanai City. But you can also take it from the Four Seasons Koele Lodge. The trail takes you through the rainforest and beautiful scenic lookout where you can see all of the Hawaiian Island sat once. The trail also takes you to Lanai Hale. At 3400 feet, it is the highest peak in Lanai.

Take a Stroll in Lanai City

Lanai was home to the Dole Pineapple Plantation and a great way to explore the history of Lanai is to explore Lanai City. There are some great boutiques and eateries to check out including Dis N Dat Shop, mike Carroll’s Gallery, the Cory Labang Studio and the Local Gentry.

Koloiki Ridge was the site of a fierce Hawaiian battle in the 18th century. The ridge separates Naio and Maunalei. It was here that we learned all abou the fragile ecosystem of Lanai and how the islanders are working to protect the flora and fauna. The hike is four and a half miles round trip.

One of the most unique things to do Lanai (and perhaps the entire Hawaiian Islands) is to take a UTV Wild West Adventure. The tour starts on off-road vehicles going through forests and ridges to see gorgeous views of Maui and Molokai. After the drive, we hit the rifle range to try our hand at the Lanai Pine Sporting Clays. It was our first and only time shooting a rifle and it was a fun adventure.

The UTV and Clay shooting adventure is the perfect combination for a morning out on the island of Lanai. If you are staying at the Four Seasons Koele Lodge it’s a short walk from reception. There are also free shuttles from Manele Bay Four Seasons and from Downtown Lanai as well. If you are looking for something different to do in Hawaii, Lanai UTV touris so much fun!

And these are all the things to do in Lanai. If you are booking a trip to the Hawaiian Islands and are looking for something different, we suggest checking out Lanai. It is luxurious, adventurous and you will see far less crowds than on other islands in Hawaii.

About The Planet D

Dave Bouskill and Debra Corbeil are the owners and founders of The Planet D. After traveling to 115 countries, on all 7 continents over the past 13 years they have become one of the foremost experts in travel. Being recognized as top travel bloggers and influencers by the likes of Forbes Magazine, the Society of American Travel Writers and USA Today has allowed them to become leaders in their field.