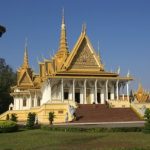 
Top Solo Travel Deals, SE Asia-Bangkok: Bangkok is often overlooked in favor of Chiang Mai and Phuket or dismissed as just another large city.  While I was prepared for similar low expectations,, I had a wonderful experience there!  Bangkok/SE Asia was easily one of the top 3 trips of my lifetime after visting 61 countries.

As a woman traveling alone in Asia, I found everything easy. English was widely spoken and in Cambodia and sometimes in Vietnam dollars were accepted. I met with warmth and friendliness everywhere I went.

I tried 4 different ways to see Bangkok and the surrounding area:

1. A small group city tour-This was a good first day overview of the city and three principal temples or wats.

2. Large local tour-This day trip to the summer palace and former capital was interesting and ended in a boating excurson back to the city. Unfortunately, the crowd was so large simply stopping to take  photos raised the risk of losing the guide.I ended up getting the Parisian mobile phone number of one of the group members as my “contact”. Then if I ended up standing by the roadside hoping to find transportation back to Bangkok, I could try to call someone!

3. Pivate tour- A 6 hour tour with a focus on the Grand Palace-This was the highlight of my stay. I also made a point of leaning from the guide how to maneuver the Bangkok subways.

4. Completely independent day in Thailand – Following my guide’s instructions, I headed out from my hotel without a guidebook but intent on making my last day in Thailand an adventure. It was glorious to regale in total freedom as perplexing as it could be understanding unfamiliar sights. I was especially puzzled by finding a Buddhist shrine supported by multiple small likenesses of zebras!  Although I never found out why, I will always remember the experience.

Let us hear of your own solo travel adventures!