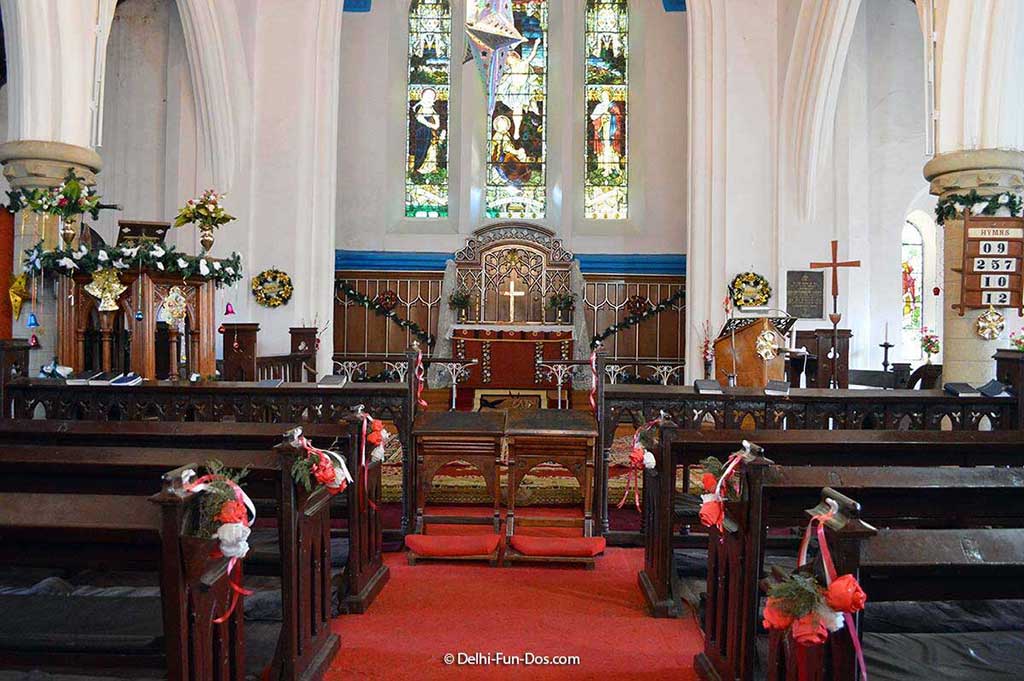 
Christmas celebration in Delhi keeps the metaphoric heat up in winter every year. But Christmas parties during COVID are a non-starter. As an alternative, we suggest you travel during Christmas and see some of the famous churches in the hills of North India. These colonial churches of India still narrate stories if you are keen to listen.

Christians in India, statistically speaking, are a small percentage of the total population. Yet, Christianity in India is not a new concept. This religion spread in India between 4th and 6th century. European colonisation established the base further since the 15th century. The British presence in India led to the proliferation of elaborate churches in Gothic styles that are still beautiful – like a classic. St. Paul’s Cathedral in Kolkata, then Calcutta, is a great example of this design.

The capital of British India shifted from Calcutta to Delhi in the year 1911. But the British officers found the North-Indian heat oppressive and would move to the cool hills of Himalayas at the slightest opportunity, especially during summer. As a result, Shimla in Himachal Pradesh gained the tag – “summer capital of India”. It is therefore no surprise that colonial architecture flourished in the hills as well. The beautiful churches in the hills stand testimony to the grandiose of the British era.

Christmas, as we know, is celebrated in most places across the globe on 25th December to commemorate the birth of Jesus Christ. Given a much smaller Christian community, one would expect Christmas to be a non-event in India. Surprisingly, this festival has a huge popularity in India. Christmas is somewhat a religion-neutral festival here and is called “Bada din” or the Big Day in Indian parlance. Devout Christians in Delhi and other parts of the country attend church services held in various languages. But people from all communities, faiths and beliefs attend Christmas parties and fairs, enjoy Christmas cakes and other goodies, visit churches to see the lights and decorations and wish each other “Merry Christmas”.

Also Read: Get the Festival Vibes with this Christmas Concert in Delhi

Christmas 2020 is different. Given the COVID 19 situation, parties have been cancelled and church services have mostly gone online. How can you spend the Christmas and the holiday season this year so that it is still merry? Fret not; we have a cool suggestion, quite literally.

Safe travel during corona is a great option and we say this from hands-on experience. We have travelled locally up to Manali as well as traveled to the USA during Corona. If one follows the basic rules – covering the nose and mouth with a mask, washing or sanitizing hands regularly, maintaining physical distance, and last but not least, avoiding crowded places, one is safe during travel.

There are some beautiful yesteryear churches in India specially in the hills of North India that you can visit. Mountains and open areas are relatively safer from enclosed places and you can travel with precautions. In fact, this may be the perfect time to visit these British era churches in the open Himalayan Mountains. These churches with their stone walls, high towers, stained glass windows and wood pulpits take you on a space-time travel to another era in another part of the world. Moreover, the Himalayas in winter are very different from the rest of the year and you can have the most memorable time of your life during holiday season 2020.

Christ’s Church in Kasauli, Himachal Pradesh is a magnificent piece of architecture very close to the Kasauli bus stand. The grey walls with a contrast green roof complete with spires and a cross, immediately transported us to the manors of England. The inside was no less beautiful. Resplendent stained glass paintings, imported from Spain and Belgium gave the interior a serene lavishness. The church, we understand, was established in the era 1844. More than 175 years had passed, yet Christ’s Church looked as good as new. Not only devotees, but travellers from far visit this church and you should too.

Lansdowne in Uttarakhand is a cantonment town established in the British era. When we first visited Lansdowne, we were told there was an old church perched on top of the hill. We are succours for old architecture and did not mind the trek. The sight of the gorgeous St. Mary’s Church was worth all the sweat. It was a small quaint structure with dull yellow walls and complete with very high spires. The area was quiet and it seemed we had travelled into a time-warp. Given nature and solitude, if you are a new couple, this could be a great romantic getaway in the hills.

Nainital is the city of lakes. But did you know it is a hub of beautiful colonial architecture? There are many churches here. We visited the beautiful St. Francis Church here not far from Mall Road. The stone-paved church wall had wife columns with red spires. It looked a three-dimensional version of a painting. The church, we were told, was established in the year 1868 for the small diocese in Nainital. However, it is now one of the popular sites in Nainital. Surprisingly, there is something about the aura of the church. Notwithstanding the tourist footfall, it is still a very peaceful shrine.

The gorgeous stained glass windows at St. Paul’s Church at Landour are a beauty that can’t be put forth in words. We walked up to Landour from Mussoorie to visit the famous joint “Char Dukaan” and St. Paul’s Church. This church built in 1840 had concrete yellow-ochre exterior. Even after so many years, the walls almost sparkled against the clear mountain sky. But we were just not prepared for the grandeur of the imported stained glass Jesus Christ’s paintings inside. The sunlight brought of the details and we were blown over by the serene expression on Christ’s face. Art is God and it has been some years. Yet, the imagery has stayed with us.

This post would remain incomplete if we do not mention the Christ Church, Shimla. The church was built in the year 1857 for the local diocese many of whom were British. Befitting the beauty of Shimla, the church built in the neo-Gothic style, is a beautiful piece of architecture. The church has stained glass windows and the spires are visible from afar. But to us, this church was the show-stopper for its stunning location. It opened up to a huge free space – like a limitless courtyard – and that itself conveyed a strong sense of the divine.

Come to think of it, there are so many other churches that we wish to write about. For instance, there are many churches in Delhi and we are sure, some of you pass those frequently. These are mostly post-independence architecture and more grounded in the ethos of India. Do look out for further posts on this topic.

Meanwhile, Merry Christmas and Happy Holidays from all of us at Delhi-fun-dos.