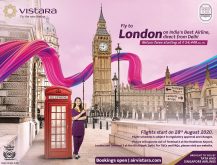 
Vistara will operate special, non-stop flights between Delhi and London Heathrow from 28 August to 30 September 2020, marking its foray in long-haul international operations. The flights have been introduced as part of the bilateral ‘transport bubble’ formed between India and the UK. During the period, Vistara will fly thrice a week between the two cities – on Mondays, Wednesdays and Fridays. The one-way fares from Delhi to London start from INR 29,912 in Economy Class, INR 44,449 in Premium Economy, and INR 77,373 in Business Class. Bookings for these flights are being progressively opened on all channels, including Vistara’s website, mobile app, and through travel agents.

The airline will deploy its brand-new Boeing 787-9 Dreamliner aircraft on the route to provide an exceptional, non-stop flying experience to travellers in both directions. The airline also received its second Dreamliner aircraft recently, further strengthening its fleet to operate more such long-haul flights and expand its international operations.

Leslie Thng, Chief Executive Officer, Vistara, said, “As the world starts opening up in a phased manner following an extended global lockdown, these special flights give us the privilege of facilitating travel between the two countries. We are confident that travellers will appreciate having the choice of flying India’s only five-star airline to and from London, which also upholds the highest standards of safety and hygiene.”

“The arrival of our second Boeing 787-9 Dreamliner further strengthens our fleet and underlines our commitment to expanding globally. There is an inherent need for an Indian carrier with a modern fleet, world-class cabin products and onboard service to fly non-stop on long-haul routes. Our Dreamliner aircraft help us distinguish our offering and give us a competitive edge in the market”, said Thang.

Vistara will accept all eligible customers meeting visa/entry requirements in both the countries, as specified by the respective government bodies. Vistara strongly encourages its customers to fully understand these guidelines before making their bookings.

* Schedules are subject to regulatory approvals

*** The first flight from London Heathrow to Delhi will be on Saturday 29 Aug at 1535 hours. All other flights will follow above schedule

Onboard the aircraft, Vistara’s cabin crew will wear personal protective equipment (PPE) and avoid all non-essential interaction with passengers. In line with the health and safety norms, the airline has introduced a new food & beverage service that will be offered to all customers. Aircraft interiors will be deep-cleaned after every flight using approved cleaning agents –  a procedure that includes thorough sanitization of all surfaces such as seats, touchscreens, overhead bins, seatbelts, tray tables, galleys, etc.