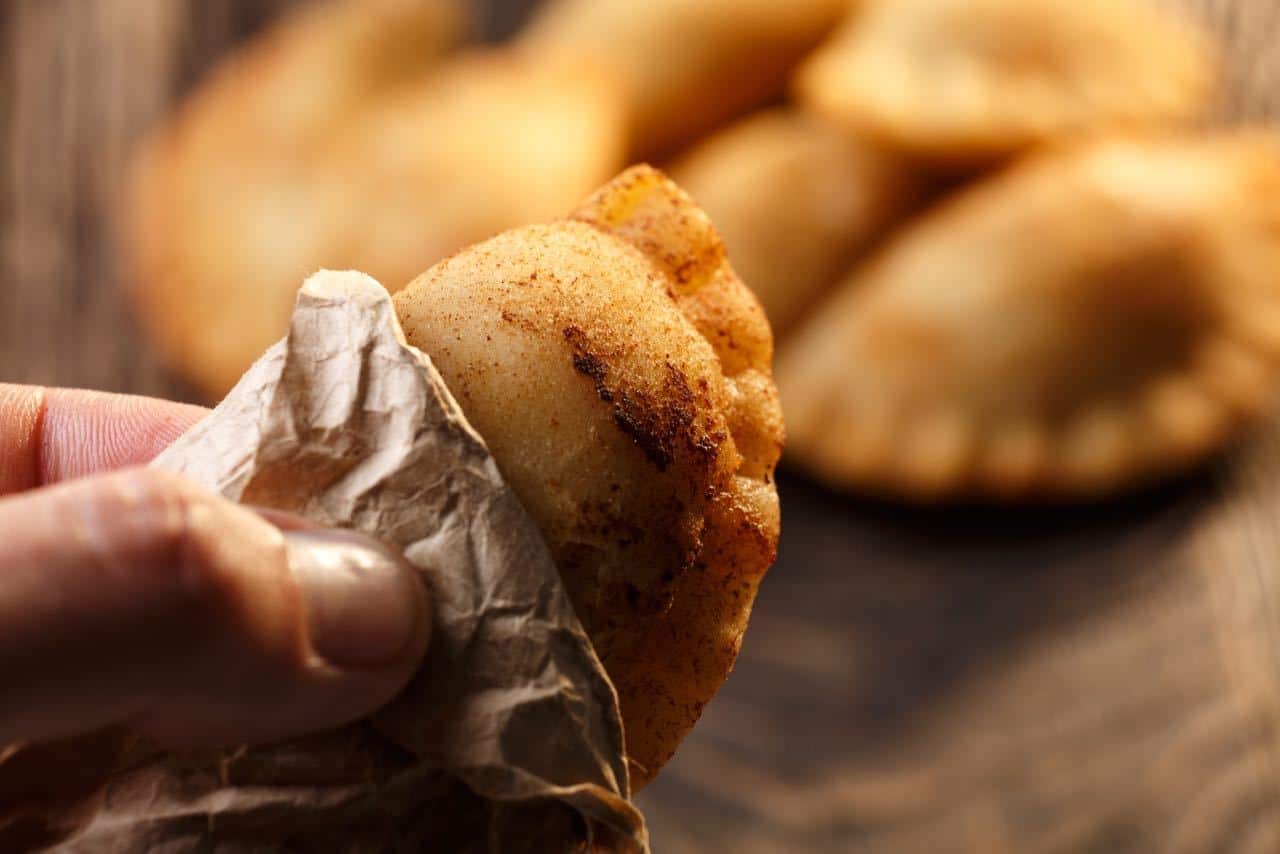 Russian food has developed over centuries under different social, cultural, geographical, and regional influences. Because the cuisine has evolved in the homes of ordinary people, modern Russian cuisine is both unique and diverse.

You can find typical Russian dishes in the expensive restaurants or the cheap kofenyas, kafes, and stolovayas (canteens), each differing from region to region. Let’s look at some of the staples and famous dishes in the different areas of Russia. If you want to know what to eat in Russia, you’ll find the answers in our ultimate list of Russian food to try!

The food in Northern Russia includes a lot of fish and reindeer meat and some bear and squirrel. It might be unfamiliar to many Western visitors, but it’s worth exploring, especially if you really want to immerse yourself in the fascinating Russian culture.

Attributed to the Chukchi or Nanai cuisines, a sack made of reindeer skin is filled with reindeer meat and bones and covered in snow over a few months. Once unearthed, it can be consumed.

These famous gingerbreads, a popular food in Russia, are stamped with images of the Tula Kremlin or coat of arms. Some also have names of people. The dough is made of cinnamon, rye flour, honey, and eggs and sometimes stuffed with a jam or condensed milk filling.

A dish of thinly sliced frozen fish. The plate is prepared by freezing sturgeon, salmon, or omul and then thinly slicing them. Stroganina is eaten by dipping the fish into a pepper and salt mixture. Apart from Yakutia in the North, Stroganina has become famous in almost all of Russia.

Originating in the mid 19th century, the Beef Stroganoff takes the Stroganov family’s name from St. Petersburg. The 1871 edition of Elena Molokhovet’s Russian cookbook “A Gift to Young Housewives” holds one of the older recipes for Beef Stroganoff. This traditional and delicious Russian food is now famous the world over and has many local variations.

Popularly known as Russian Salad outside Russia, it was created by the Belgian chef of Moscow’s then-famous Hermitage restaurant, Lucien Olivier, in the 1860s.  The recipe once included rare and expensive ingredients such as hazel grouse, caviar, veal tongue, smoked duck, and crayfish tails. Over time, these costly ingredients disappeared from everyday recipes and were replaced by diced chicken, eggs, carrots, green peas. However, simple items like potatoes, mayonnaise, vinegar, olives remained.

Created in the 1820s by a chef who wanted to impress Empress Elizabeth, this famous cake consists of layers of biscuit-like sponges infused with honey and condensed milk. Some variations use whipped cream or butter.

Called bird’s milk cake because it is so delicate and exquisite, the dessert is made with custard separated by layers of thin fluffy sponge cake and topped with a ganache. Vladimir Guralnik created it in 1978 at the famous Praga restaurant in Moscow.

Other Russian Dishes To Try

Corn, poultry, milk products, beef, and spices are a prominent feature of North Caucasian cuisine, one of Russia’s many different subregions.

Lamb meat that has been marinated before being roasted over a fire. Several variations of the marinade across the North, from ayran to yogurt to just plain water.

Meatballs or klopse were first made in Kalinigrad in the 18th century and made of minced veal with sardines, herring, or anchovies. Konigsberg Klopse is famous for a dish of meatballs in a white sauce.

This tasty Russian food consists of dumplings stuffed with boiled meat and served with an onion and garlic sauce.

Popular in North Ossentia, this is a type of kachapuri pie filled with meat, cheese, pumpkin, beet leaves, and potatoes. 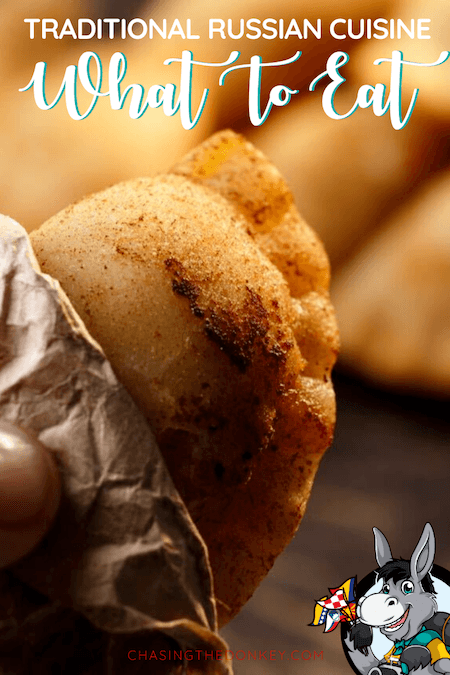 Rich in calories, many cultures have influenced the cuisine of the Tatars.

Also called Ocpocmaq, they are small triangular-shaped pastries much like a samosa and are filled with a mixture of onions, potatoes, and meat. It’s sold in kofenyas, markets, and stolovayas and usually had with tea.

A pie made of unleavened dough stuffed with potatoes, pumpkin, meat, and fruits.

Shulpa is a soup made of a duck, turkey, or chicken cooked with carrots and onions for a few hours.

This Tartar noodle soup soon found its way across all of Russia. It can be made with milk, chicken, or mushroom broths, while the noodle is made of buckwheat or wheat flour.

Other Tatar Dishes To Try

The cuisine of coastal Russia includes a lot of fish and varies from one side of Russia to the other.

Famous around Lake Baikal, the smoked omul fish is also said to have curative properties.

These are fish pies that are popular in the Arkhangelsk Oblast region.

Salted and dried parts of the sturgeon.

Other Coastal Russia Dishes To Try

The Altai Mountains produce the largest quantity of buckwheat in Russia, and it is a prominent feature of Altai Cuisine.

Large buckwheat fields near the Altai Mountains are home to many bees. The honey produced by these bees has a distinctive taste and an amber color. One of the sweetest Russian delicacies, this honey is popular all over Russia and can be found in stores everywhere.

This dish is merely small cubes of dough filled with chopped onions.

Other Altai Mountains Dishes From Russia To Try

Siberian cuisine tends to the exotic, with reindeer and bear being considered regular fare.

Initially from Perm on the Kama River banks near the Ural Mountains, the Pelmeni gained popularity in Siberia in the 14th century. These dumplings are filled with ground meat of beef, rabbit, pork, or bear. The stuffed dumplings can be frozen and stored throughout the winter. They’re cooked by boiling in salted water till they float and are then served with vinegar, mustard, sour cream, or butter.

Originally from Yakutia, the Indigirka is a fish salad made with muksun or nelma fish. The frozen fish is diced and mixed with onions, pepper, salt, and oil before serving cold.

An exotic Siberian dish where the bear paws are first marinated, then fried and stewed for hours. The marinade can vary from yogurt to plain water. One of the most extraordinary dishes in any Russian food guide, bear paws are certainly not for the faint-of-heart. Yet, they’re surprisingly tasty.

A popular dish of raw fish is cut into chunks and seasoned with onions, butter, vinegar, or lemon juice. Muksun, nelma, or cisco are typically used for this dish.

Other Siberian Dishes To Try

A cold soup made with kefir or kvass, meat, dill, cucumber, scallion, radish, and boiled eggs. Okroshka may be garnished with Smetana or sour cream and served with ice cubes to stay cold.

Soon after cabbage was introduced to Russia from Byzantium in the 9th century, the Shchi soup appeared, now a main food of Rusia. The easy to prepare soup consists of cabbage, mushrooms, flour, and meat such as beef, pork, or poultry. Some regions use fish instead of meat. When Shchi is made without meat, it is called pustye or empty. When the sauerkraut is used instead of simple cabbage, the recipe is called Sour Shchi.

A rustic clear fish soup made with catfish, bream, ruffe, cod, perch, salmon, and trout. The soup was a favorite in Russian courts of the 16th and 17th centuries.

Symbolizing fertility and stability, the kurnik was traditionally served at weddings. It can be savory or sweet. The savory version is filled with layers of rice, eggs, chicken, and mushrooms.

Coulibiac is an oblong Russian pie that later became popular in France. It consists of a filling of salmon, mushrooms, onion, cabbage, and buckwheat or rice. This hearty and healthy dish is easily among the best food in Russia to try.

A traditional dessert of fruits or berries, popular flavors of varenye include cherries, dandelion, rose petals, apricots, blueberries, and tangerine oranges. Varenye is quite like jam, but the fruits aren’t allowed to lose their shapes. It is served as a topping for cakes, pancakes, and more.

Derived from the word kholod, meaning cold, the dish is traditionally a New year’s food item and always served cold. It is prepared by boiling the meat for 6 to 8 hours, then separating it from the bones and letting it cool down to form a jelly.

Also known as Shuba or “herring under the fur coat,” the salad consists of salted herring meat covered with a coat of shredded cooked beets, carrots, and potatoes in mayonnaise. It may also contain a layer of eggs or onions.

A pie that’s often eaten in summer, limmonik is made of sugar and crushed lemons without taking their peel off. The sweet and sour are cooled down, sprinkled with powdered sugar, and cut into squares before serving.

Kotleta Po Kiyevski, suprême de volaille à la Kiev or Chicken Kiev as it is popularly known, has several attributions as to its origin. But no matter who invented the dish, the fact remains that it is well known far beyond the borders of Russia. The plate is made of a pounded chicken filet stuffed with butter and herbs before being breaded and fried and tastes delicious.

Paskha or pasha was a pre-Lenten dish that uses up all the food items that cannot be eaten during Lent. The main ingredient is tvorog or curd cheese, while eggs, butter, Smetana or sour cream, almonds, raisins, spices, and vanilla. The pasha is shaped like a shortened pyramid.

And Some More Russian Foods!

As if this list of traditional Russian food wasn’t long enough, we have even more delicious dishes from Russia here.

As this Russian foods list clearly shows, there’s a lot of food in Russia to be tried and tested. Don’t forget the drinks too! What’s your favorite dish? What would you like to go back to Russia to try? Comment and let us know!

Other Travel Blogs for Russia