6 of the best road trips to the Grand Canyon 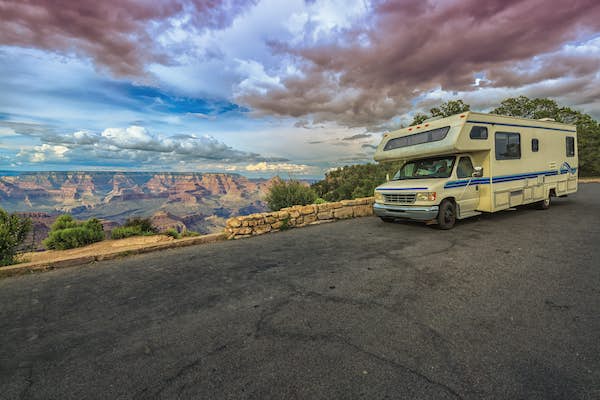 So, you’ve decided this much: Grand Canyon National Park will be the end point of your next road trip.

The next questions are where will your journey begin, and how will you get to such a remote part of the US? Before you get to the varying terrains within the Arizona park itself, you’ll experience jagged desert ridges, soaring firs and oft-snow-capped mountains looming in the distance – along with some super-quirky towns – en route.

Explore the planet’s most surprising adventures with our weekly newsletter delivered to your inbox.

Amid private bus tour options from Las Vegas, helicopter flights stemming from Phoenix and shuttles aplenty from Flagstaff, Los Angeles and even Salt Lake City, having a car at the Grand Canyon has major perks. With your own wheels, you can map your own adventure of both North Rim and South Rim stops as well as hikes to fill your day (or week) to the max.

So, as you balance flight costs, road-trip wishlists and pinpoint the perfect place to start and/or end your voyage, here are the best road trips to the Grand Canyon.

1. Las Vegas to the North Rim via Zion National Park

From Las Vegas, why not enjoy a bonus national park on the way to the Grand Canyon? While the southern route to Grand Canyon National Park deservingly gets a lot of love, the northern route opens up a seamless detour to Zion National Park, where vivid red cliffs and emerald pools await. The closest town to the park’s gate, Springdale, is a prime spot to recharge at Tex-Mex hotspot Oscar’s Café or the art-draped Spotted Dog eatery. From there, it’s a desert landscape and small towns – like Kanab – to the Northern Arizona border before ultimately entering the park.

Planning tip: If the North Rim is your final destination, ensure you’re going during the six months of the year its roads are open. The North Rim of the Grand Canyon is closed – encompassing all roads like key thoroughfare State Route 67 – between December 1 and May 14 annually.

2. Las Vegas to the South Rim via Kingman, Arizona

There is no shortage of glittering casino lights and non-stop entertainment in Sin City. After a few days and perhaps many free casino drinks while gambling, some visitors need a nature-infused reprieve. The South Rim of the Grand Canyon is within day-trip distance. From wherever your Vegas home base may be, your South Rim journey will look like a capital U on the map, via Interstate 11, US Route 93 and Interstate 40.

Within 45 minutes of Vegas, make pit stops at the Hoover Dam and the antique shop-clad, quaint town of Boulder City. A drive along its main drag – Nevada Way – feels like Main Street USA, tucked worlds away from Vegas’ glitz. As for a detour, make a stop in Kingman, Arizona, which has an Insta-worthy stretch of Route 66, including the Arizona Route 66 Museum and quintessential American joint, Rutherford’s 66 Family Diner.

Planning tip: Strolling down the Las Vegas Strip or Fremont Street, you will see tour companies aplenty offering Grand Canyon bus or helicopter journeys. If a pitstop-free trip to see the Grand Canyon is most desired, a 12-hour round-trip bus ride from organizations such as Canyon Tours or GC Tours may be your best option.

3. Flagstaff to the South Rim

Situated approximately 150 miles north of Phoenix and just 90 miles south of the Grand Canyon’s South Rim, Flagstaff provides about as frictionless a road trip as it gets to canyon country. Its airport – Flagstaff Pulliam Airport – is serviced by regional operators American Eagle and United Express, so be on the lookout for flight options. From Flagstaff, it’s a straight-shot north on US Route 89 and over to Route 64 into the canyon. While the vistas are far less multifaceted than some other regional options, still count on a sweeping, flat desert vibe.

Detour: If you have a few extra hours to kill, trek north to Horseshoe Bend near the border town of Page. While it technically isn’t in the national park, its horse-shaped canyon wizardry will leave you inspired and perhaps wanting to kayak in it.

4. Phoenix to the South Rim via Wickenburg and Williams

It can be oh-so-easy and tempting to take the Interstate 17 straight shot from Phoenix to the Grand Canyon but opt for the scenic route instead, which curls west of the interstate via US Route 93 and Arizona Route 89. After getting out of the urban bubble, hit the old west-vibey town of Wickenburg where its history is on full display at the Desert Caballeros Western Museum. From there, your next stop is the historic downtown of Cottonwood, which has wine-tasting rooms aplenty and the looming Tuzigoot National Monument, with panoramic views of Sedona’s red rock-filled flair. Additional stops can include Flagstaff as well as Prescott, whose Sharlot Hall Museum includes a prior governor’s mansion within its confines.

Planning tip: In Cottonwood – if you’re looking to explore multiple vineyards and tasting rooms – there are local wine tour operators that can handle the transportation. A safe bet is Taste of the Valley Tours.

5. Los Angeles to the South Rim

Yes, a trip from Los Angeles to the South Rim is doable in about eight hours. But, along the primarily Interstate 40 stretch, you’ll want to make a few stops, so prepare for a long day or overnight journey. Among the more nostalgic stops is the Route 66 Mother Road Museum in Barstow, which in addition to Route 66 branded knickknacks and rotating art exhibits, has artifacts from local Mojave communities. Before crossing into Arizona where Kingman and Williams await, pop into the 1.6 million-acre Mojave National Preserve to see Joshua trees and explore sandy dune trails.

Detour: To weave in a bonus state, detour north on Route 95 in the town of Needles to the Colorado River-adjacent town of Laughlin, Nevada. In Laughlin, you’ll find a smattering of casinos and lodging options.

6. Salt Lake City to the North Rim via Moab

Utah is national park heaven. Grand Canyon National Park is often the final stop on a park hop that stems from a flight into Salt Lake City. If you take this route – along US Route 6 and 191 through Utah – you can experience the 2500-plus stone arches that await in Arches National Park and the sandstone swirls of Canyonlands en route to the Grand Canyon. Once you cross into Arizona, hit the Navajo National Monument as a bonus, which has a handful of self-guided tours through the rocky terrain.

Planning tip: Take a week-plus to do this trip and if you’d like to camp or stay in lodges in the parks, book as soon as the appropriate window opens (usually about six months in advance).