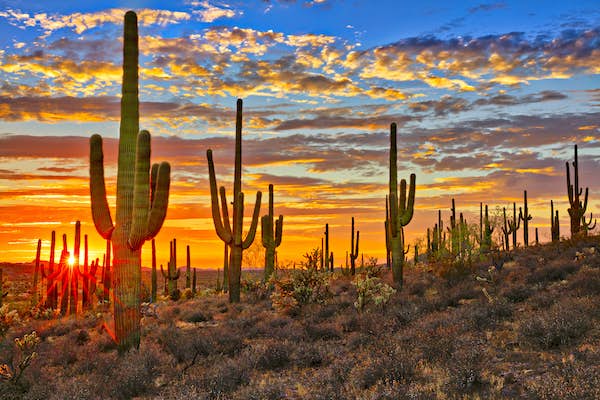 Some people might think of Arizona simply as “the desert,” but visiting this state’s best national parks and monuments is a surefire way to discover there’s so much more than that to explore. You can wander in dense woodlands in Grand Canyon National Park; see Petrified Forest National Park’s grasslands blanketed in wildflowers; spot condors hovering over cliffs; or stroll among fossilized trees all in Arizona.

Get local insight on destinations all over the world with our weekly newsletter delivered to your inbox.

It’s easy to be absorbed by the wonders of Grand Canyon National Park. Stretching more than 1.2 million acres, the park’s outer edges include the South Rim (open year-round) and the North Rim (closed from mid-October to mid-May), which are 210 miles apart. If you don’t want to drive yourself, book a spot on the seasonal Trans Canyon Shuttle.

The busier South Rim offers easy access to panoramas, paved paths along the rim and hikes like the Bright Angel Trail, which zigzags to the Colorado River and historic Phantom Ranch at the base of the canyon. If you’re short on time, ride the free village shuttle (private vehicles are restricted during summer) to landmarks such as the geology museum and Yaki Point.

Visit the 1905 Hopi House designed by Mary Colter to see historical artifacts and shop for authentic Indigenous arts and crafts, such as Navajo rugs. At the eastern edge of the South Rim is another Colter structure worth seeking out: the 1932 Desert View Watchtower, also modeled on the architecture of the ancestral Puebloan people.

The Grand Canyon’s North Rim, which sits at 8000ft, offers a quieter pace, with scenic drives and trails leading to pictographs and dramatic sunset views. Get your legs moving on a 1.4-mile round-trip hike to Coconino Overlook or the tougher Redwall Trail. This 5.2-mile round-trip route rewards hardy hikers with views of colossal limestone cliffs. To experience a different aspect of the park, go for a horse ride through the Kaibab National Forest’s pines.

An instantly recognizable Arizona icon is the massive saguaro cactus. These giants are 125 years old on average (they grow arms once they’re around 60), can reach 50ft and weigh eight tons. The best place to see this protected species, which only grows in the Sonoran desert, is at Saguaro National Park. It’s divided into Rincon Mountain District (Saguaro East) and Tucson Mountain District (Saguaro West), and the city of Tucson sits smack in between.

The saguaros tower over 25 other species of cactuses that thrive here, such as teddy bear chollas, fishhook barrel and prickly pear. Visit from April to June to see the behemoths in bloom. On the park’s west side, the paved Cactus Forest Drive loops through a Seussian landscape, connecting to hiking trails and picnic sites. See century-old limestone kilns on the Cactus Forest Trail, then drive deeper into the park to get to Signal Hill Trail. This steep 0.2-mile hike leads to petroglyphs created by the ancient Hohokam people in the 13th and 14th centuries. Keep your eyes open for desert tortoises and Gila monsters (the largest lizard in the US).

On the park’s east side, younger saguaros dominate the landscape. Hike the one-mile Freeman Homestead to the site of an old foundation, and you might see great horned owls in the cliffs above the wash. At higher elevations, the cactus forests dwindle and oak-pine woodlands of the Rincon Mountains, which are part of the Madrean Sky Islands. These “desert islands” support 6000 plant species, second only in biodiversity to the Amazon rainforest.

Although the words “badlands” and “petrified” evoke harsh landscapes devoid of life, the Petrified Forest National Park is both beautiful and bountiful. Located about 110 miles east of Flagstaff and dubbed the “Painted Desert,” the park’s badlands and petrified wood (the world’s largest concentration) are composed of bands of blue, white and purple, which come from quartz and manganese oxides.

More than 50,000 acres of the park are actually wilderness, mostly prairies and semi-arid grasslands. Arrive early in the day to watch for wildlife, from badgers and bobcats to kit foxes and porcupines. Plus, the cooler mornings are best for hiking. See fossilized trees and crystalized wood up close on the 0.75-mile Crystal Forest Trail or 3-mile Blue Forest Trail. Be sure to check out the park’s displays of fossils more than 200 million years old and visit Agate House. This eight-room pueblo is where ancestral Puebloan people lived between 1050 and 1300. The structure was built near agricultural fields and petrified wood deposits that were made into tools, such as knives and scrapers.

For more modern examples of architecture and art, visit the 1940 Painted Desert Inn. Once made of petrified wood, the building was remodeled in Pueblo Revival style under the direction of Mary Colter, who designed the Grand Canyon’s Hopi House and Desert View Watchtower. The original murals painted by Hopi artists and a large mountain lion petroglyph are on display inside.

Situated between the North Rim of the Grand Canyon and the Utah border, Vermilion Cliffs National Monument sprawls 280,000 acres across Marble Canyon. If you’re seeking solitude amid remote buttes, canyons and cliffs rising from 3100 to 7100ft, you’ll find it here. But you’ll need to plan ahead: many areas in the national monument require permits for both camping and hiking. A sought-after area to explore is Coyote Buttes North, home of the Wave, a swirled sandstone formation. It’s a 6-mile round trip hike, plus there’s no trail, so you’ll need to do your own wayfinding (bring a GPS or compass and map).

Not everything requires exploring on two feet. State Route 89A passes a couple of overlooks and connects to House Rock Valley Road. Just 3 miles along the dirt road is Vermilion Cliffs Condor Release Viewing Site. Look for the endangered California condors cruising overhead or on the cliffside; streaks of white guano signify roosting spots. Every year on the fourth Saturday of September, condors are released from the top of the cliffs.

Although Montezuma Castle National Monument is a small site, its history runs deep. Located in the Verde Valley 25 miles south of Sedona, it was established in 1906 to preserve Indigenous American culture. The compact site almost feels like a diorama of an ancient village built by the Sinagua people, who inhabited the valley as far back as 650 CE. A short pathway lined with sycamores and catclaw mimosa trees leads to the limestone cliff, where a 20-room building (likely occupied by several families, apartment-style) peeks out from above.

Built by the Sinagua people in around 1050 CE, the castle is a well-preserved example of architectural ingenuity. The placement of rooms on the south-facing cliff helps regulate summer and winter temperatures. Its elevated location provides protection from Beaver Creek’s annual flooding, plus it functions as a lookout.

Drive 11 miles north to see the Montezuma Well, which is part of the national monument. Along with the limestone sinkhole, cliff dwellings and irrigation channels are characteristic of the prehistoric people who have lived in the area, dating back to 11,000 CE. The water in the well, which is 386ft across, has high levels of arsenic and other chemicals, but it still supports endemic species such as water scorpions, snails, mud turtles and leeches.

These six small businesses serve their community and travelers