Best Beaches In Bulgaria Along The Bulgarian Black Sea Coast 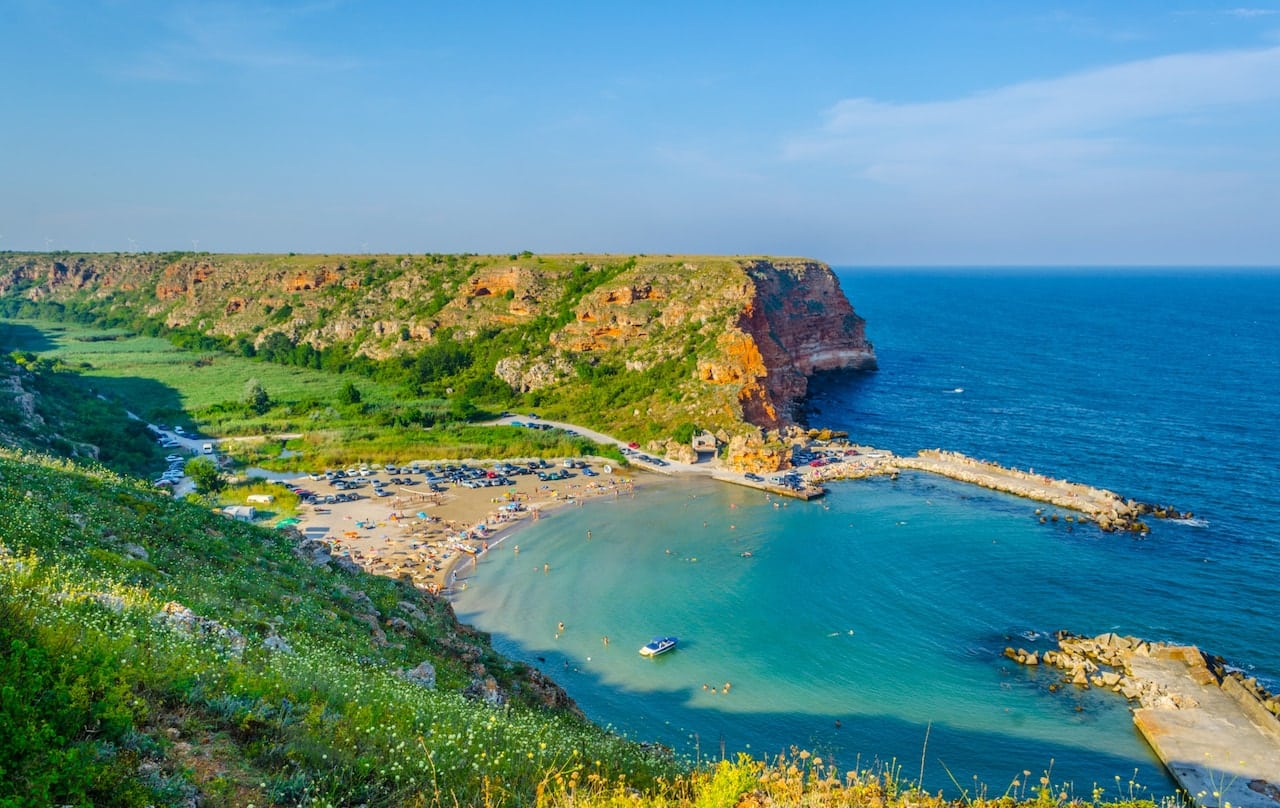 Along the 378 kilometers of the Black Sea coastline in Bulgaria, magical towns and golden sun-kissed beaches like Sozopol, Golden Sands, or Sunny Beach are to be found. Here are the best beaches that should not be missed when traveling the Bulgarian Black Sea Coast.

Burgas ranks as one of Bulgaria’s most important cities and is home to the largest loading port in the country. Population, tourism, and industrial significance have continuously grown over recent years. Connections by land and air with Burgas International Airport make the city on the up and up.

As far as museums are concerned, Burgas was named one of the most culturally vibrant cities in the country thanks to the wide range of offers. But the offer does not only include cultural venues for all tastes and ages as one of the leading Black Sea holiday resorts. The city of Burgas also has excellent diving spots and one of the largest beaches in Bulgaria: Saxa Beach.

One of the best beaches in Burgas, Bulgaria, Saxa Beach, takes up most of the city’s coastline without question. Spread over more than 5 kilometers, the beach is full of cosmopolitan bars decorated with Caribbean settings.

Sozopol is one of the country’s oldest and most charming towns in Bulgaria. It is located just 35 kilometers south of Burgas.

Wandering the historic old town streets, built on an artificial peninsula jutting out to sea, it feels like traveling back to the 17th century. Following the Black Sea’s architectural style, Sozopol kept the original stone-paved streets, and the wooden buildings remain intact.

The city is also home to the wide Harmani Beach and the smaller Town Beach, two of the top Black Sea beaches. Town beach is the most popular beach among tourists because of the panoramic views of the old town. It can be accessed from the main city promenade.

The seafront walkway, filled with souvenir shops and open-air restaurants, is the best place to enjoy the traditional Bulgarian “shopska salata” (шопска салата). All things considered, this might be the best place to go in Bulgaria for couples looking for a relaxing beach vacation.

More than a village, Kaliakra is part of a natural and archaeological reserve. Among those mentioned before, this is the northernmost beach on the Bulgarian Black Sea coast.

Bolata Beach is only about 4 kilometers from Kaliakra, and mainly local families go here. The beach is shaped like a bit of bay surrounded by rock massifs with cave openings that create a perfect semi-circular shape. 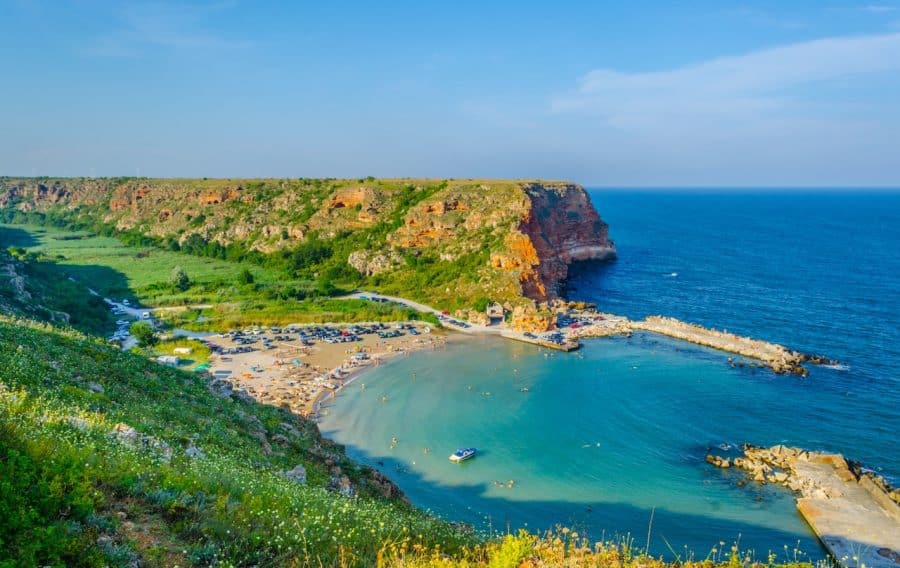 The area also includes one of the few Bulgarian marine reserves. Several small private boats and yachts anchor to the short pier during the summer days.

Varna is a must when visiting Bulgaria. There are plenty of wide avenues, a legacy from the Bulgarian Communist years, and building facades that follow architectural styles imported from Western Europe.

Varna is also called “the Black Sea capital” for its cultural and economic significance, one of the premier Bulgarian Black Sea resorts. Their modern port, railway station, and international airport connect with more than 35 countries and 100 cities worldwide.

The city’s economy is increasing with tourism coming primarily from neighboring countries such as Romania, only a few kilometers away; Ukraine and Moldova, just across the Black Sea; and the Balkans and Turkey, countries that border the nation on the west and south sides.

The city also has a black sand beach with more than 3 kilometers of sand full of bars and terraces right next to the “Primorski” green area. However, locals prefer to drive 15 kilometers to the 4-kilometer-long Golden Sands Beach (Zlatni Pyasatci), one of the most popular Bulgaria beaches.

Sometimes also described as one of the best in Europe, the beach can be reached by bus or by car following the Republic road I-9 (Републикански път I-9), the main road in Eastern Bulgaria that follows the Black Sea coastline. Bring a sand-free beach towel.

Balchik could be described as small and lovely. While many people see it as an idyllic place to enjoy their holiday, locals fear it could soon become a massive summer party destination. In the last years, dozens of new second homes and summer apartments have been built, which has increased tourism.

Balchik is so charming that even Queen Mary of Romania built a palace with more than 65,000 m2 of gardens. The palace is also full of symbols from different religions because of her personal interest in theology.

Like most other Bulgaria beach resorts, Balchik also has its own beach to enjoy the summer days. The biggest beach, “Central Beach,” is located on the city’s outskirts, right after the Balchik Pristanishte Terminal, the city port terminal.

However, small beaches can be found along the beautiful 2.2-kilometer-long Bulgarian seaside promenade. Most also have their own beach bar, such as “Tanino Beach.”

Nesebăr & Sunny Beach, The Most Popular Beaches In Bulgaria (3.5 km)

Sometimes described as the “Pearl of the Black Sea,” Nesebăr was awarded “World Heritage Site” status in 1983 by UNESCO because of the numerous and well-preserved historical buildings in the old town.

The city has historically been under Greek, Byzantine, and Ottoman rule. This mix of cultures and architectonical styles turned Nesebăr’s old town into one of the most romantic ones on the Bulgarian coast. Built around narrow streets, nowadays, the centenary buildings serve as pubs and gift shops for tourists.

About 3.5 km from Nesebăr, Sunny Beach has become the most popular beach among tourists and locals. Thanks to the 8 kilometers of fine golden sand, Sunny beach is considered the country’s largest and most fabulous beach.

Sunny Beach also has some of the country’s last remaining natural sand dunes, making the surroundings even more spectacular.

However, it is not the best place when looking for a relaxing stay. Loads of restaurants, water sports, hire tents, and some of the craziest nightclubs in the country are lined up one after another along the promenade.

One of the only remaining truly wild beaches in Bulgaria, Irakli Beach lies in a protected area about 5 kilometers from the town of Emona. The Chaya River meets the Black Sea here, splitting the beach into two different parts and creating a beautiful lagoon. Both parts have another name, the northern area is called Irakli, and the southern area is called Chaya.

It’s a phenomenal beach for those looking for solitude, sand, nature, and even nudism. This is, after all, a nudist beach. So, if you’re looking to get tan all over, this would be an excellent place to go.

Irakli Beach is one of Bulgaria’s best beaches for wildlife watchers, home to plenty of birdlife and sea creatures. Additionally, free camping is also allowed on this beach, a super-fun thing to do on a hot summer’s night. At the same time, artists, activists, and naturalists are also fond of this particular beach.

A seaside resort village in the very southeastern corner of the Bulgarian Black Sea coast, Sinemorets lies close to the border with Turkey. This is a very tiny village by any measure, home to just over 200 people, so don’t expect any crazy nightlife or major tourist attractions here. Instead, there’s terrific nature in Strandzha Nature Park, of which the village is a part.

Sinemorets is, however, an increasingly popular beach destination in Bulgaria. Previously a favored family destination, it’s also popular among artists and other creative people from Sofia. This has resulted in a welcoming and relaxed atmosphere.

There are actually two beaches in Sinemorets. The main beach, known as Butamyata, lies on the village’s eastern side and is home to a bakery, pizzeria, and beach bar. North of the village lies Sinemorets Veleka Beach, which is right at the mouth of the Veleka River. This is an absolutely gorgeous sand beach, but there are no amenities.

PLAN AHEAD TO GET THE BEST DEALS

Consider heading to Karadere Beach for even more solitude, one of the few Bulgaria beaches untouched by mass tourism. Although it’s only 5 kilometers from Byala and Goritsa, it’s still pretty remote. The only way to reach it is via a bumpy dirt road; when you get there, there are no facilities. No electricity, water, or cell phone service,…

It’s the perfect place to get away from daily stress and spend a day or two enjoying human company and nature. Everything’s clean here, too, from the water to the air to the mud baths.

Karadere Beach is one of the best Black Sea beaches in Bulgaria for beach camping. You can pitch your tent on the beach or in the forest above the shoreline. This makes it a popular destination among free-spirited travelers, including artists, nature lovers, water sports enthusiasts, and nudists. Don’t be surprised to hear guitars and bongos being played until late at night!

Just south of Sinemorets lies Silistar Beach, also part of the Strandzha Nature Park and one of the most incredible beaches in the Bulgaria Riviera. Just like Karadere Beach above, this is a relatively remote beach and not that easy to get to. A 1-kilometer dirt road through a coastal woodland offers access to this sand beach, which is about a kilometer long and 50 meters wide.

Even though it’s pretty secluded, there are some visitor facilities, such as a basic campground. The charm of Silistar Beach lies in that very remoteness. Unlike the larger Bulgaria resorts, you won’t see people doing shots or drinking copious amounts of beer here. Still, you can expect some wildlife viewing, excellent diving conditions, and some nudists. Wild camping is permitted here, too.

So, which of these best beaches in Bulgaria will you visit this summer?

More Beaches In Bulgaria To Add To Your List

5 Days In Bulgaria Itinerary: How To See Bulgaria In A Few Days